Intarsia Sweater (The Thing That Tried to Kill Me)

Isn't it funny how almost four months can go by without a post and you don't even notice it because time flies, and then one day it hits you that it's been ALMOST FOUR MONTHS since you last posted, and how does that happen and what have you been doing with yourself anyway? It's the first year I haven't posted anything Christmassy, or gone on and on and on about how much I love Christmas lights, or how I can't believe how big the nephews are, and so on and so forth. But I very recently gifted a sweater to someone, and thought "I must remember to blog about this" and then thought "Hey, I haven't done that for a while!" So here we are.

So this sweater. I feel like I've got my sea legs when it comes to stranded colorwork, but intarsia was still twisting my gut and causing a "Gah! NO!" reaction. But when someone says "Hey, is this a thing you can do?" and it's someone you care about, you say "Of course I can!" and then hide all the angst because where did this overconfidence come from? I made a few practice swatches, carefully selected my yarn for color, ease of caring for it, and suitability for color work, and then set to.

The sweater pattern was simple while having just enough detail to keep it interesting. I used the Harvard Square Pullover from Lion Brand patterns, which has a great big stockinette front that was perfect for intarsiafying. I had my requested graphic-- 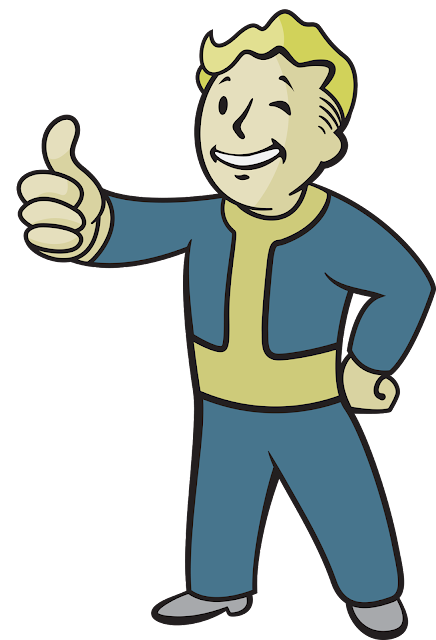 I used the Stitch Fiddle pattern-making site to get my chart (after carefully counting and figuring the size that would be best and all other sorts of mathy things that raised my blood pressure). And then I had other people cross their fingers (I couldn't cross mine--I had to knit) and got down to business. After a LOT of swearing and muttering of phrases like "I am going to burn this" and "No wonder there's a boyfriend sweater curse" I was as finished as I could be if I hoped to maintain my sanity. 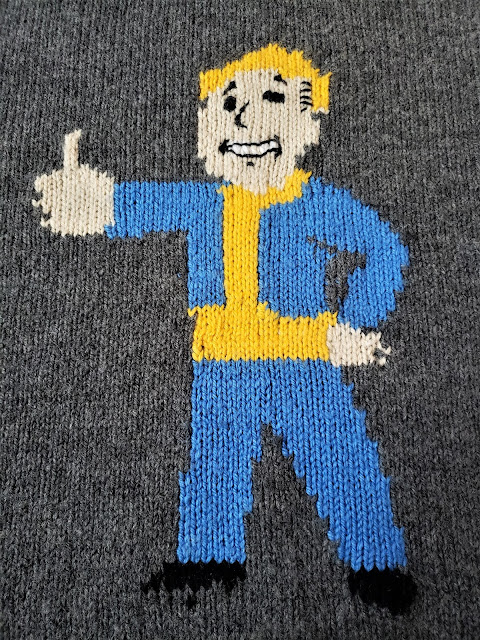 Intarsia itself is not the absolute worst I found (once you get your yarn management sorted--I used those little plastic bobbins you can find in almost any craft store that carries knitting supplies). The issues I had came from inexperience and there are definitely things I would do differently next time (yes, I said next time, but not for a long time because this was enough for a while). For example, I'd go with a thinner yarn to get a lighter weight sweater, which would also allow me to use a MUCH more detailed chart that would give me a picture I'd be happier with. So then I wouldn't have to embroider a face in sock yarn so that it wouldn't scare small children. 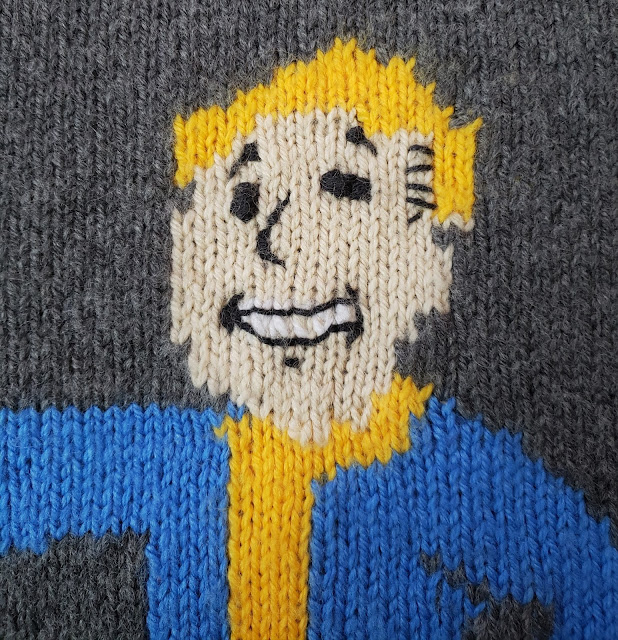 I'd also look for a top-down pattern as I was very worried about the length of this (even though I measured like a lunatic) and I like the option of making something as long as you want. 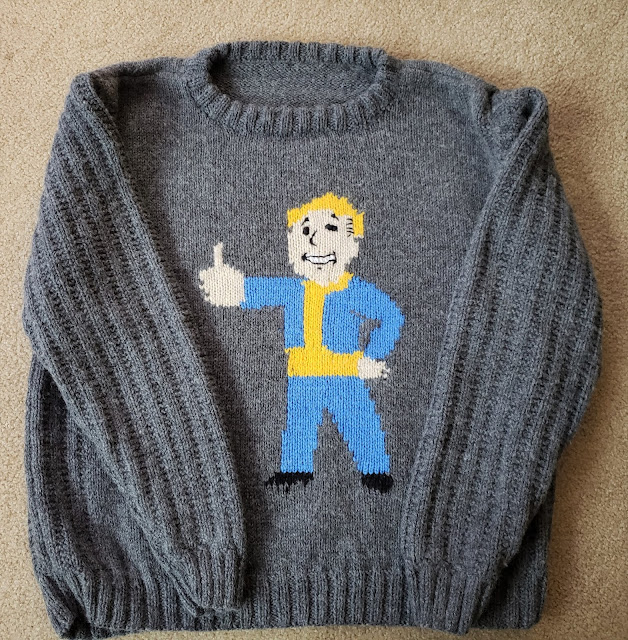 I love that 'broken rib' stitch on the sleeves--it added some nice texture, and when I sewed everything together it came together really neat. 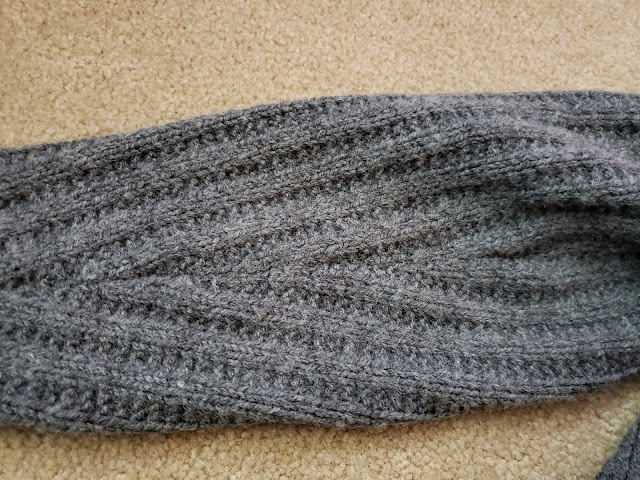 For the collar, I didn't want to leave the ribbing raw, or unfinished, as I personally find that scratchy. So I made it twice the size it was supposed to be, and then sewed it down for a nice soft edge. 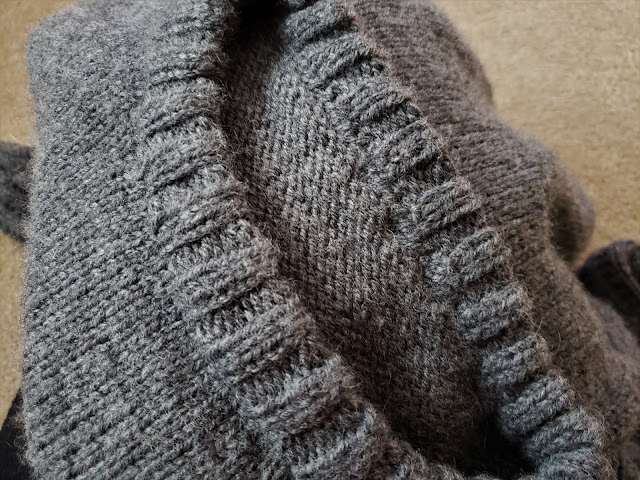 I contemplated doing the graphic in duplicate stitch, but didn't want a heavy weight blob on the front center; in retrospect I'm glad I didn't as it would have looked too puffy. Besides, the inside looks kind of neat. 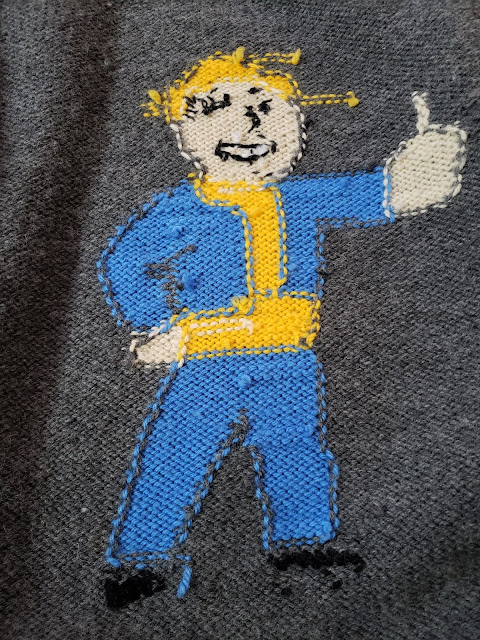 I probably overdid the weaving in of the ends, but as this was a wool/acrylic blend (I used Plymouth Encore) I wanted to make sure they were really in there). Better safe than apologizing for a sweater falling apart, amiright?

So that's that. I'm over my fear of intarsia, I've learned a LOT in the making of this sweater, and most important--it fits!
From the convoluted brain of Bethany at 2:51 PM 7 comments: