Young Mr. A-train had his fifth birthday this week. With that one starting kindergarten, and people asking if Z-man is going to get his driver's license when he turns sixteen I'm not exactly feeling youthful (until someone says to me "What are you, twelve?" and then proper order is restored unto the world). He absolutely loves his bike and his big wheel, and the pedal car he got for his birthday, and as he likes to make his imaginative play butt right up against reality, I decided to make him a few traffic signs out of foam.

I've never worked with foam before, but I rather enjoyed it. There was something sensorily pleasing about cutting into it and arranging it on the background pieces. Much more satisfying than paper-crafting, though not exactly a sophisticated craft medium.

I ended up making six signs in total--stop, yield, no parking, speed limit, and 2 hazards (because I didn't want to waste the extra yellow pieces I had cut)-- 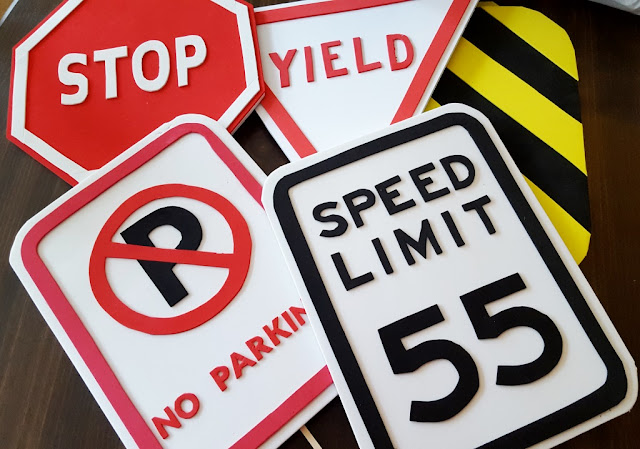 As always, don't look too closely as you'll see some oopsies in there, but overall I really like the way they turned out. 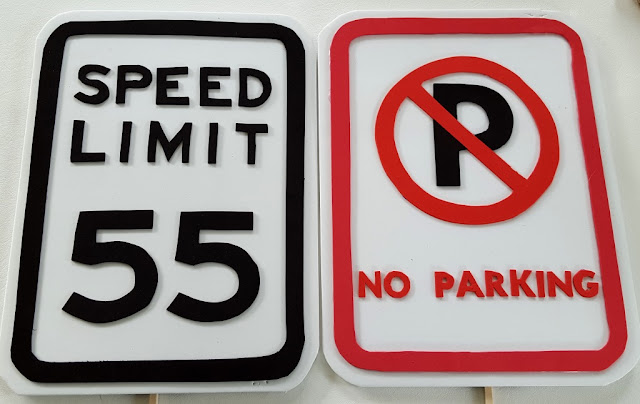 I think the speed limit sign is my favorite. I was going to make the limit a more of a realistic big-wheel speed, but A-train would tell me "I go way faster than that, Aunt Bee." To get the fonts and sizes right, I tried for about four seconds to free-hand those, and then said some adult words and printed off some templates from Google Images to trace in reverse. 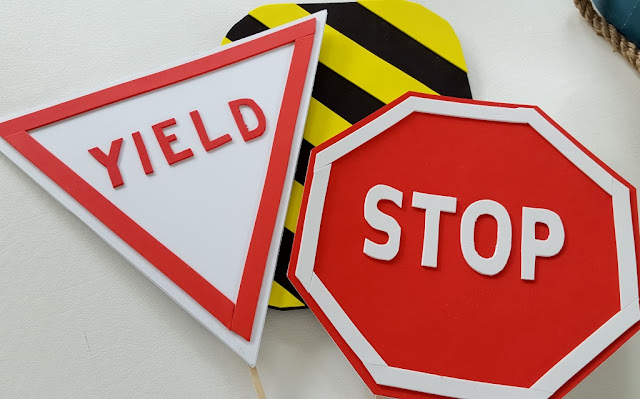 The yield sign cracks me up with the crooked letters. We joke that it looks like it reads as "Yield? I guess? If you want? I'm not sure..." The stop sign I needed my sister's help with--I do not have a math brain and there are eight angles and eight sides and that's just way too much to deal with on a Saturday afternoon. Wanna know a secret? The 's' is on upside down. It's all I can see! But A-train is five, and has zero cares to give. It's really his nutty auntie who will be driven mad by this. 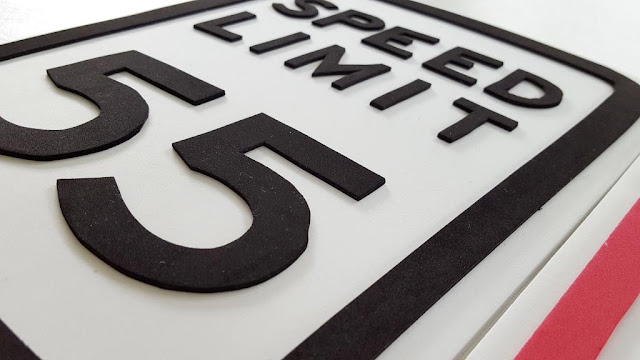 I used a thicker piece of foam for the base, and then bought the self-adhesive stuff for the details. I bought everything at Joann's. I bought some square sticks (where they sell the wood stuff and dowels) for them to be stuck into the ground, and simply glued them to the back and secured them with black duct tape). 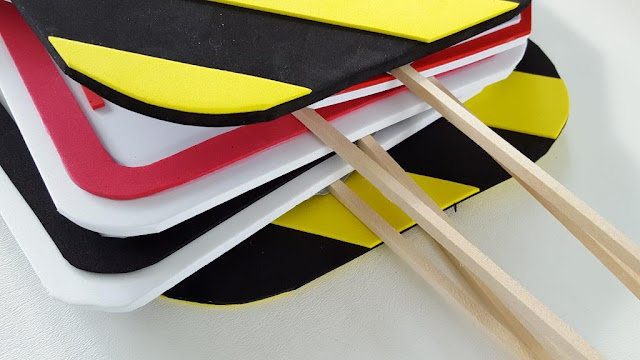 I should have bought the next size up as these were not super sturdy for poking into the ground, but I didn't realize that until after they were made. However, my brother-in-law added some sturdier bits of wood to them to make them play-time ready instead of 'for display only.'

Of course now as I'm driving my brain is a constant whirr of "Ooo, I could make that one! Ooo that would be easy!" Because, again, I'm twelve.
From the convoluted brain of Bethany at 9:11 PM 5 comments:

Fill Me Up, Buttercup (with Cheddar, Indigo, and Tangerines)

Remember in the old days when I used to sew bags all the time? Like multiple bag posts a week, sometimes? I wonder when I had the time for that. Not that life is so different and so busy now, but I have no clue where I got the energy for it. I guess one of the first hints that I'm getting older is that my back now protests if I spend too long standing over a table and cutting or hunched over my sewing machine stitching.

ANYway, last week I finished up a bag, and I've been giving it its test run this week and have found it to be quite acceptable. 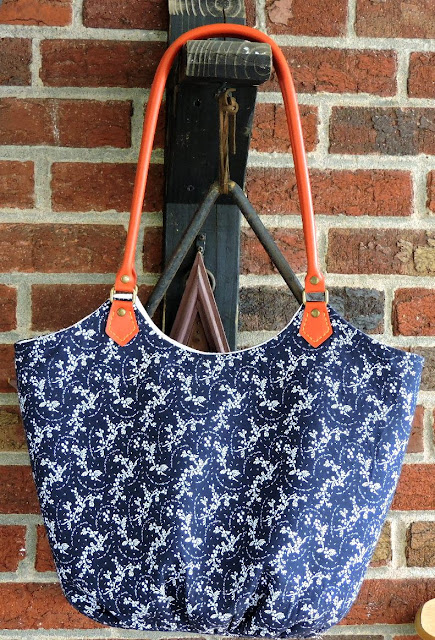 This bag is the 'Fill Me Up, Buttercup' tote by u-Handbag. It's quite oversized for my usual needs, but I do like carrying a bigger bag. The handles are a generously sized pair of thirty inch leather handles in tangerine. The fabric is from the new Cheddar and Indigo line. I interfaced each piece (lining and exterior) with two pieces of Pellon ShapeFlex 101. It feels quite sturdy and strong, but doesn't have the bulk to it that fleece or padding would give. I wasn't entirely sure how it would hold up, but so far so good. 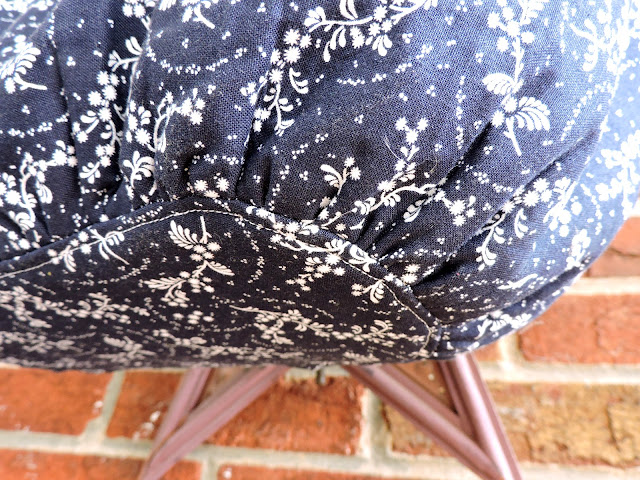 Of course I didn't see any of that fuzz until I edited the photos, but let's focu on those lovely gathers instead, shall we? The pattern called for stitching some basting threads and tugging the gathers into place, but I don't find that method to be what you'd call fun so I just moved along in sections, pleating and pinning that way, until everything was in place and could be stitched down. The lining is gathered the same way-- 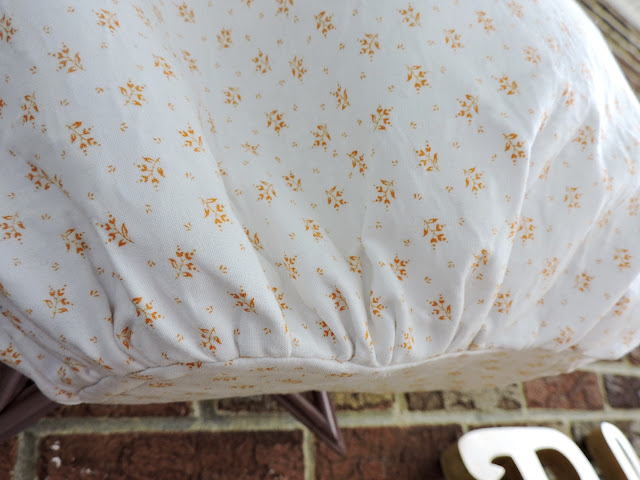 The closure is a suspension bridge style zipper. I ended up trimming a little too much off the ends, but it's not restrictive or noticeable by anyone but me, so it's what the general public would call just fine. 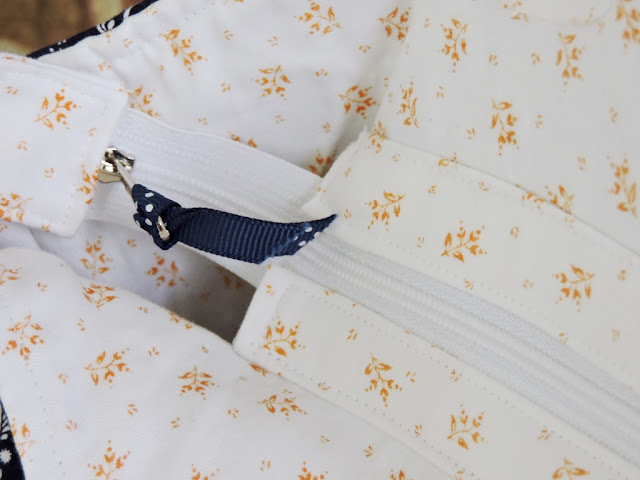 The lining has my standard zip and slip pockets-- 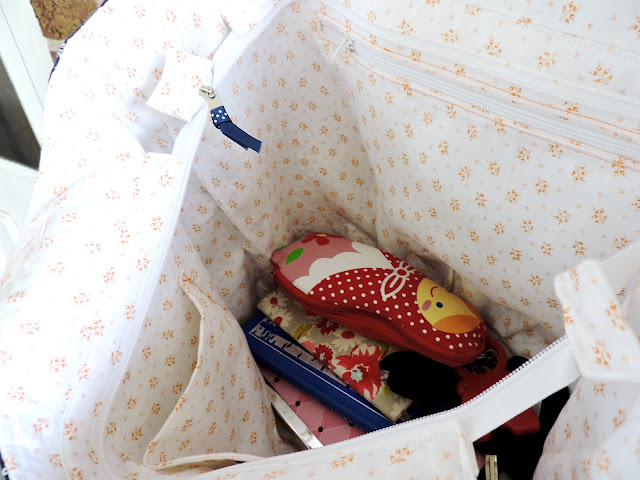 You can see how much space there is. It'll still hold an umbrella, a bottle of water, and a folded up cardigan or the like. And the handles are quite comfortable. 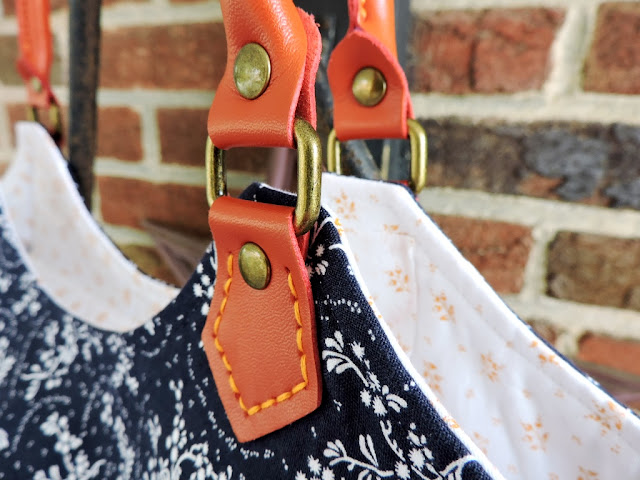 They are piped leather handles that I stitched on with embroidery thread. Quite easy to do, and the leather handles make the bag look store-bought (but in a good way). I tried to fuse some scraps of the lining over the stitches on the inside of the bag, but it doesn't want to behave properly, so I'm going to have to take needle and thread to it and whip-stitch them into place (they're purely aesthetic so I'm in no rush. I also just did my nails, and the way I hand-stitch will destroy them).

Anyway, that's my new bag. For once it's in fabrics that just came out, instead of having been used by everyone while I hemmed and hawed over if I wanted to ride that particular bandwagon, and then hunted like the dickens (and paid too much money) for exactly what I wanted instead of just buying it already.
From the convoluted brain of Bethany at 8:56 PM 10 comments:

'Allo! Just popping in to announce the winner of my fabric destashing giveaway. So let's get right on down to it, shall we?

Here's what was up for grabs: 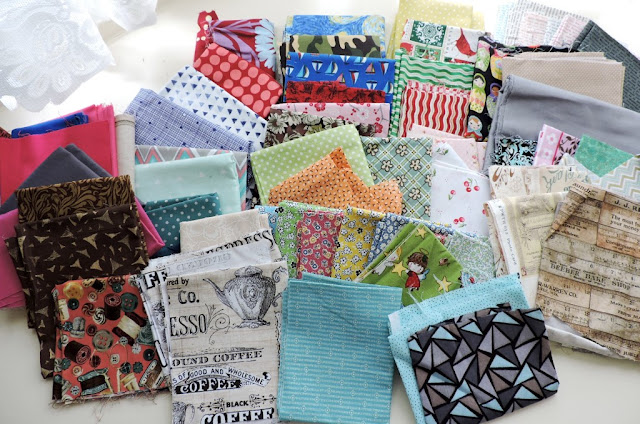 Janarama, you're the big winner!! I'm going to shoot you an email, but if you read this before you read that--congratulations!! As soon as I get your address I'll get your goodies shipped to you.
From the convoluted brain of Bethany at 9:38 PM 2 comments: