I was recently watching Sex and the City reruns (I guess it would have to be a rerun since they're not making new ones). In one episode Carrie Bradshaw is carrying this quite large, vintage looking frame purse. It was a big, bright, floral, and looked like it might be from the seventies. I wanted to make something similar, but couldn't find a fabric that looked just like that (what, you don't expect very vintage fabrics/bags from a TV show that wrapped ten years ago to be available on eBay?). While I was perusing online, I saw that there were still a few Amy Butler fabrics available from her 'Love' collection of several years ago. First box checked: fabric acquired.

When I went to the free pattern online, I saw that the frames were no longer available. But using the pattern and a ruler, I figured what the most likely size of the frame would be. I ordered the closest thing I could find on Etsy, and when that arrived, modified the pattern to fit just right. Second box checked: frame acquired.

I needed to wait until the frame arrived to see if I could use the same style handle used in this bag. So after a quick check, third box checked: handle ordered and never-quickly-enough-because-Prime-two-day-shipping-has-spoiled-you delivered.

Then I cut and sewed, yada yada yada, and now here's what I'm carrying. 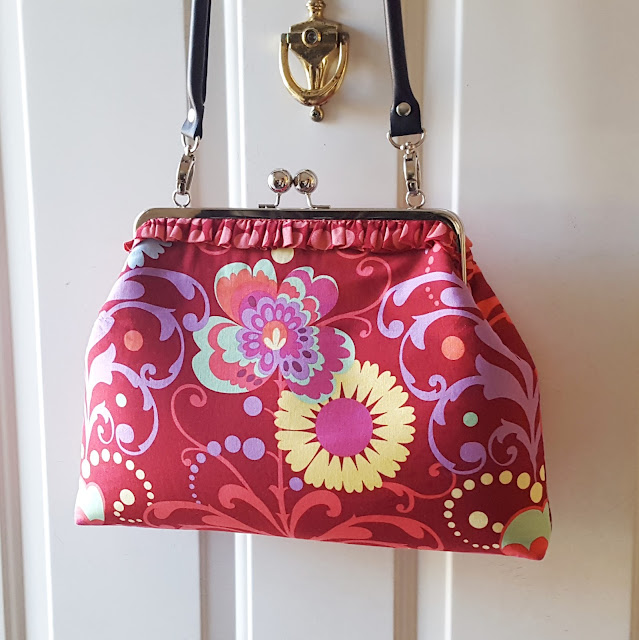 The original frame used has a bit of a curve to it, but I'll take what I can get. I have a shaky relationship with hand-gathered ruffles, and things didn't improve with this bag. I got there in the end, but there was begging and pleading for sure. 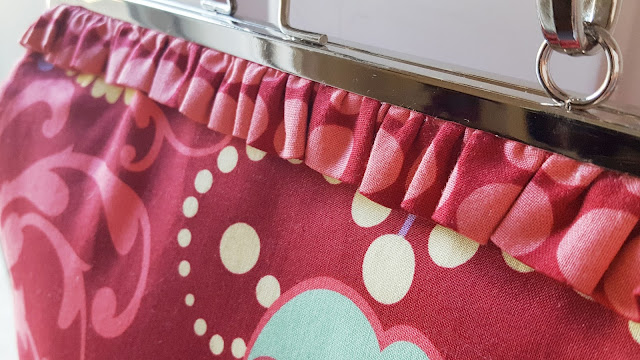 The bag is actually a really good size. It holds all of my stuff easily, but isn't so large that I feel inclined to stuff it as I do with my tote-style bags. 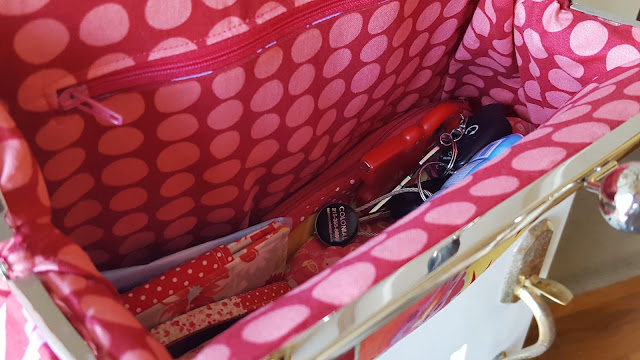 For the interfacing, I used Pellon's sew-in foam interlining. I really love the squishy but firm structure it gives a bag. As this frame is quite large (10 x 3.5 inches) the extra oomph of the foam really helps it keep its shape. 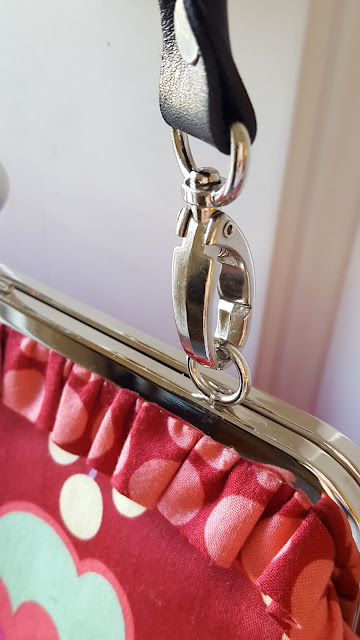 I don't think a thing exists that isn't helped by more sparkle. These clip-on handles fit nicely onto this frame. If the fit wasn't right, I would have made a fabric handle sewn to lobster hooks, but it wouldn't have been as much fun. 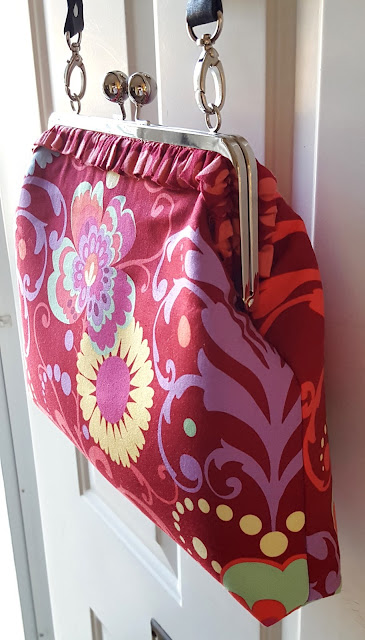 I am just so super in love with this bag. The glue I used for the frame has an Incredible Hulk level of strength to it, so I feel quite confident I won't have an issue with the weight of it.

Now if I could just learn to walk in high heels and have the willingness to spend a month's rent on a pair of shoes I'd be all set.
From the convoluted brain of Bethany at 11:06 PM 13 comments:

Not Really Too Soon, But Definitely Sooner Than I Thought

I am a major over-estimator of how long things will take me to accomplish (for small things--big things I grossly underestimate). Last week I was thinking of how soon Christmas will be upon us, and that I'd better get started knitting with the Christmas sock yarn I had bought. 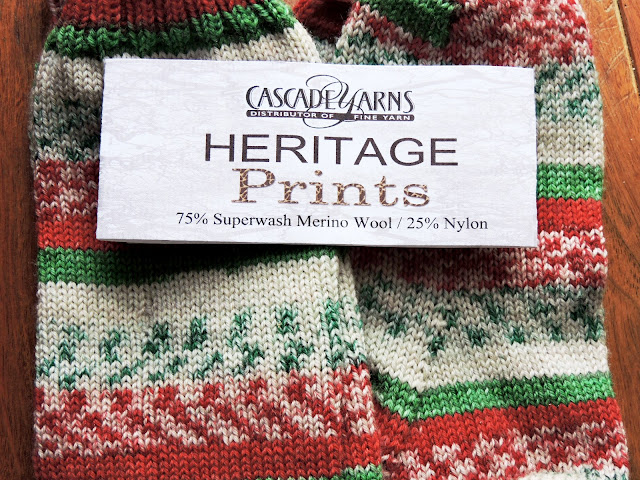 When I saw this yarn in the 'Holidays' colorway last year, I could not find it anywhere--it must have flown off of the shelves. This year I thought I might find an odd ball or two online, left over and unloved. Would you believe I found this on Amazon of all places?

I decided to make these from the toe up. TU socks appeal to my desire to not have much in the way of yarn remnants as I can just go and go until I'm almost out. However, I find that TU socks just do not fit me in the way that I like. There's a bit of snugness in certain parts that I don't love. I'm going to stick with the cuff-down pattern that seems to work for me (based on the Winwick Mum sock-along). 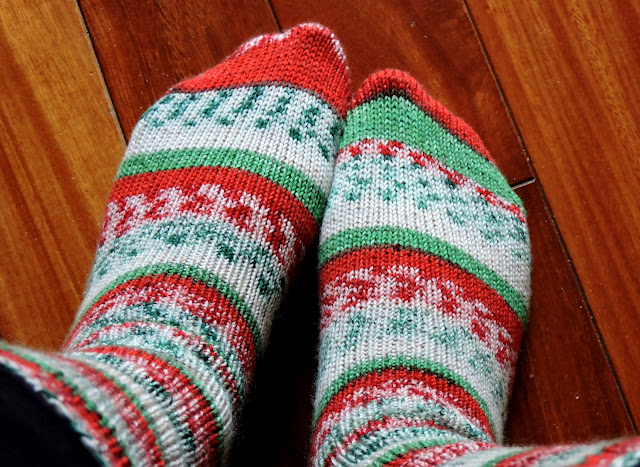 I tried very hard to make these fraternal twin socks (as one of you lovely folks called them in a comment) and thought I had succeeded based on the toes. But take another look. 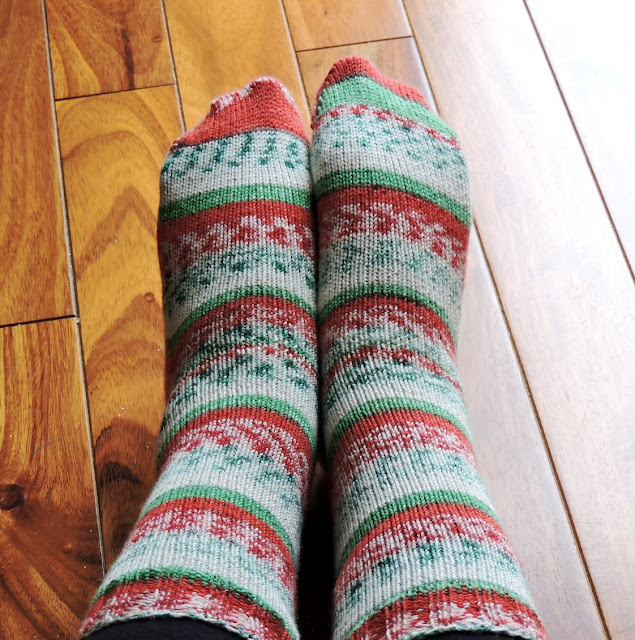 I don't know how I did it, but I've obviously got mad skills to have made socks that start off different and end up identical. 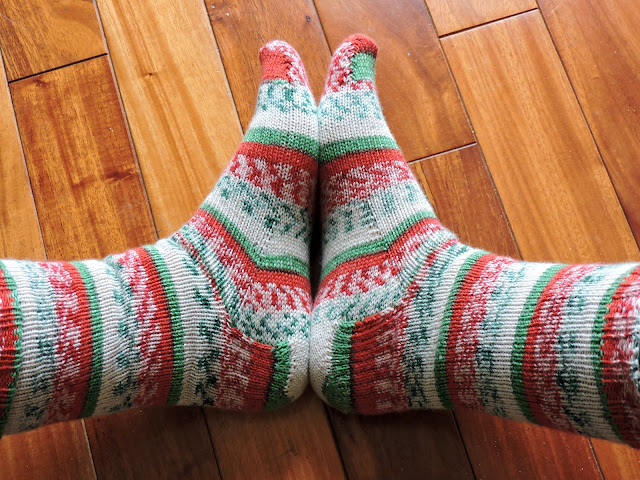 I love these self-striping, self-fair-isling yarns. I wish someone would dye them in red and white, or blue and white, so that they'd look Scandinavian, but I'll take what I can get. 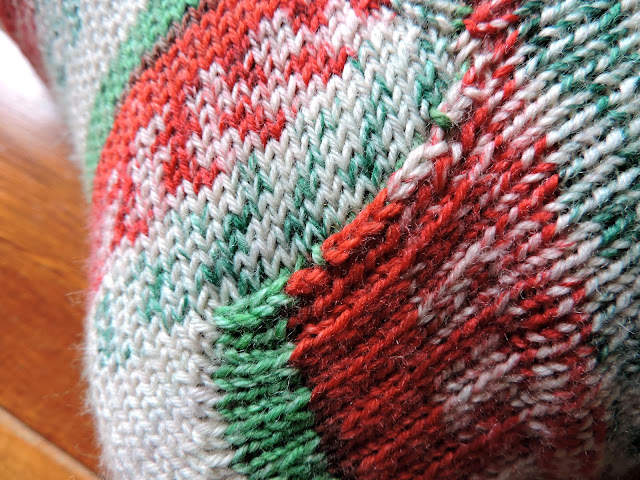 I did have a teeny hiccup on the heel flap, it looks like--I must have stitched instead of slipped. And not once, but twice. I enjoy this part cuff-down so much more--you pick up and knit the stitches and I feel like a knitting rock star when I do it. This way it just happens and I can't figure it out, so I feel more dumb-lucky instead of awesome, haha. 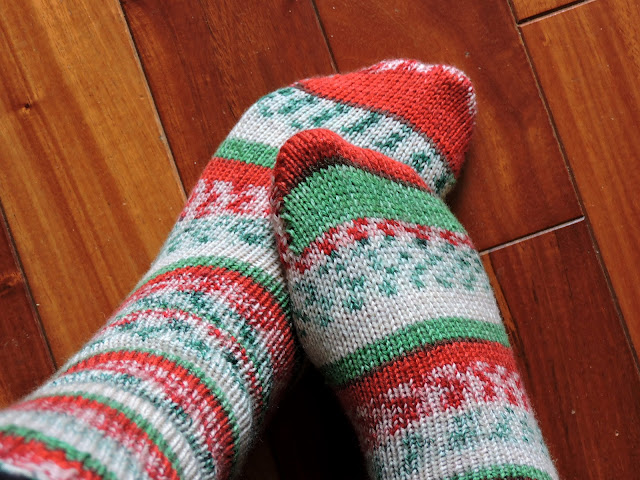 As I cannot begin toe-up socks fewer than three times before I stop messing up, I thought I'd be weaving in ends much closer to Christmas, instead of under two weeks. But I love having these to look forward to, as they're so perfectly Christmas-sweater-for-your-feet. 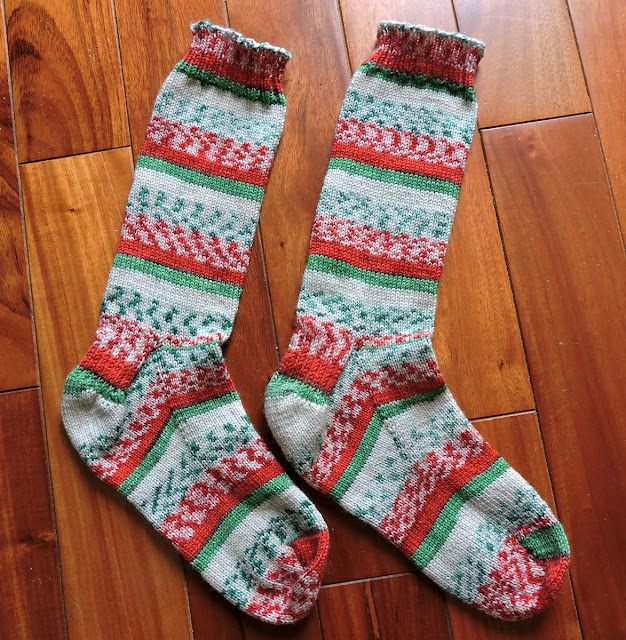 It's probably good that these are done, because this book was delivered today, and it's so beautifully filled with patterns, prose, and pictures that I can feel an obsession coming on. 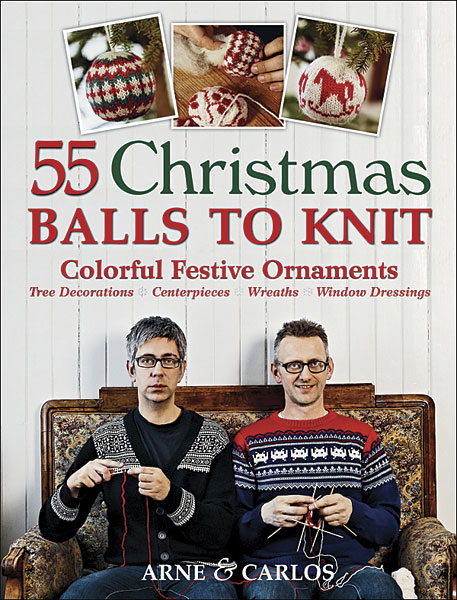 I'm actually going to a knitting workshop on Thursday taught by these two fellas--I'm hoping they'll let me take some pictures to share!
From the convoluted brain of Bethany at 8:20 PM 4 comments:

Good Monday morning! When does anyone really say that other than a holiday, right? I can't believe it's Labor Day. We were supposed to have a family BBQ yesterday, but the threat of a hurricane had us canceling things. True to expectations, it was one of the most beautiful days in the history of the world--blue skies, perfect temps, great picnic weather. Thanks, local weather folks--you may only care about ratings, but I care about accuracy.

Anyway, my quilt block. Every month I am amazed that another month has passed, as I remember when this first started. Finally, though, I think we might be starting to get somewhere. I think I know who the murderous fiend is, but I still have no idea about the quilt blocks. 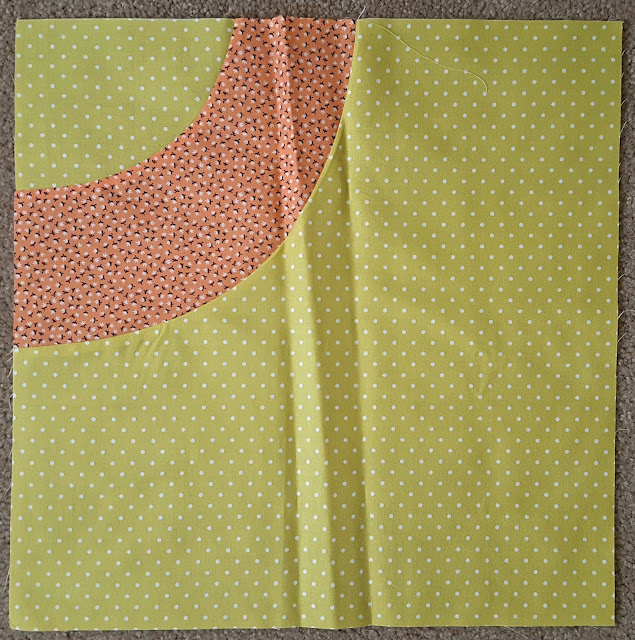 That's not a big wrinkle. That's a trick of the light. Nothing to see here, folks. This month's block came with a few options--applique, and curved piecing. I went with curved piecing, forgetting it's not on my list of favorite things ever. BUT I have a dress pattern I want to make with princess seams, so I suppose this can serve as practice.

This month's block came with a hint as to which block this block connects to--the first block we made way back in January. 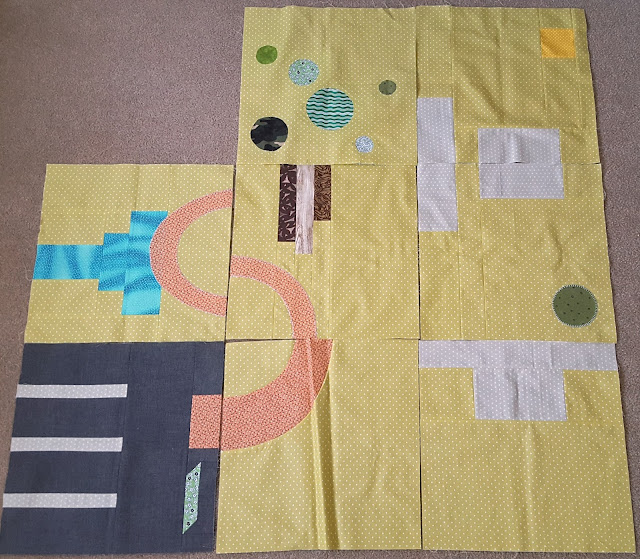 Wow, that's a bad wrinkle. I fold these all together instead of keeping them lying flat, and they all must have ganged up on August's block.

What I would like to do (but never remember until I write this post each month) is to cut up the picture of the quilt block that comes in the monthly pattern, and sit and play with them as a puzzle of sorts. I've tried rearranging my quilt blocks in just such a way, but they're big and floppy and annoying to play with while crawling around on the floor.

Well, that's August. Today is Fantasy Football draft day. We don't have a work league this year, so my brother said I could get in on he and Z's team. I've never played before last year and always thought it quite silly, but I came in second place last year on sheer beginner's luck (losing by less than two points--points that were obtainable if I had made even one of two decisions differently), and found it quite fun. I actually found myself looking forward to rooting for "my guys." So I bid you adieu until next time.
From the convoluted brain of Bethany at 11:44 AM No comments: