Hi kids! First, thank you for your lovely notes on my last post. My CT scan came back normal, so the doctor is thinking I have a viral ear infection. I haven't had any more dizziness, but have an occasional bit of...that feeling you get when you stand up too fast. It's worse when I turn my head too quickly, so I'm watching that, but for the most part I'm definitely feeling much better. Not quite my usual self, but getting there.

Second--look at these beautiful pink roses I received for Valentine's Day. The light was coming in at just the right angle, so a picture was necessary. 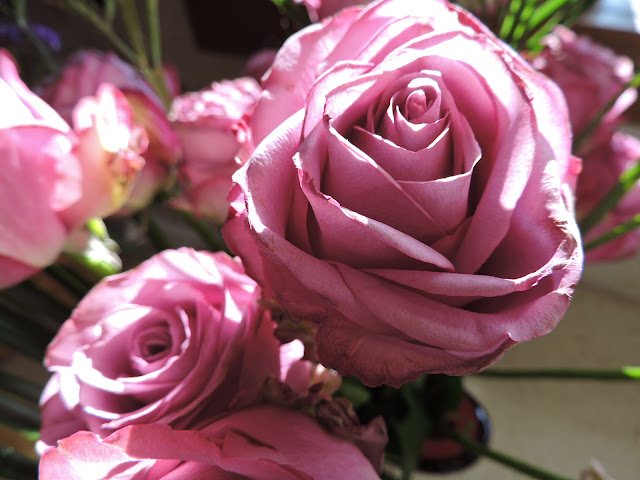 Third, I made another hat. I'm getting a kick out of knitting colorwork hats as they're quick and satisfying, and justifies my purchase of an interchangeable 16-inch circular needle set. This pattern is called 'Alaska' and is available on Ravelry. I used the exact same yarns as called for in the pattern so as to get the northern lights effect, but this simple pattern would look great in a combination as simple as white and gray. 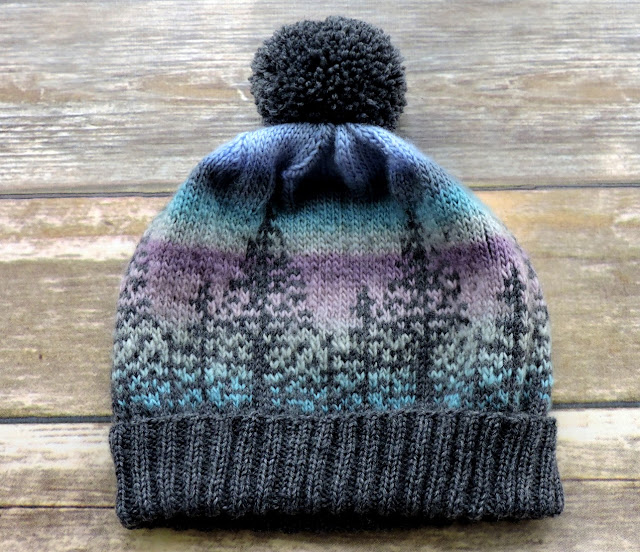 I made marks all over the chart so I would know where I trapped the floats so I coud trap them somewhere else on the row above (if you trap them in the same spot all the time, they show through the work). Some of these sections had looooooong floats that I didn't love, but I took my time, worked consistently, and everything came out fine. 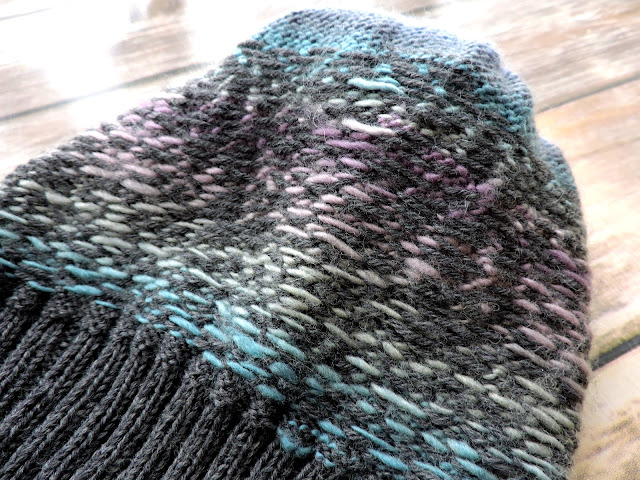 I even like the way the inside looks. I've been doing research on color dominance when doing colorwork. According to some, there should be no dominant color as that indicates bad tension. This makes absolute sense to me and is what I'm aiming for. However, there are more on the other side of this particular coin that say your background color should carry on the top and your dominant color should be on the bottom (the 'dominant' color being the one you want to stand out the most). The dominance part comes in with how the strand lays on the back of the work, and how it is pulled naturally by the stitches, and so on. I wanted my trees to be dominant, so I sub-consciously decided to NOT make them so (would you expect anything else?). Either way I look at it, though, I really like this hat (and truthfully I don't think I can tell if one color is more dominant than the other unless I knit another one up the other way and compare them side by side).

I finished off with a tidy little pom-pom and promptly wore it out. It's a toasty thing, and fits without squeezing my brains out (but also stays put).

All this stranded knitting to build my confidence for an Icelandic sweater. I've made good progress on the sweater, but have yet to hit the colored section. With the way our weather has been I won't be needing it this winter so it doesn't really matter how long it takes me, anyway.

OK, tea and the Olympics are calling my name. Later, kids!
From the convoluted brain of Bethany at 9:04 PM