Maybe I got arrogant by dominating the zipper lately.  I probably thought "This [next project] sounds so simple, and I'm awesome, so how could it go wrong?" But it did. Oh, how it did.  A few weeks ago, I decided if I could not win this then I would just make my own [the kit was sold out right away and me of little patience went for something else instead of just waiting for what I know would be a stellarly written pattern].  So I bought a pattern and a frame...

...and used some fabric from my stash to make my own carpetbag.  It seemed simple enough....I spent an evening cutting out all my pieces, being ultra careful not to hack it up.  Then I spent an evening doing the pocket. Just the pocket.  A ten minute job that took me all evening because instead of investing one minute and twenty-three seconds of work to make something easier I will invest about an hour trying to do something the hard way just because.  No less than three times did my mother tell me she didn't like my fabric combination, but I'm stubborn and refused to look at it objectively.
I took off from work on Friday...we had a wee spot of snow and I just didn't feel like dealing with it. I figured my itchy little fingers could finish that bag in no time flat.  I put in some inside pockets--but because of the style of the bag one came out way to close to the top.  I struggled through the rest of this bag, its big fat layers not cooperating and giving me clean seams, but still being stubborn I decided I was going to win.  After way too much time I had to put in the frame. After struggling, and fighting, and some cursing, I managed to wiggle that frame in. And then....failure.  My hinges wouldn't line up once inside the bag. I tried two different frames, several sets of pliers, I got other people involved. I skinned my thumb and got blood blisters when the pliers slipped. I spent about three hours trying to get this to work when my sister says "I don't like that bag. And I really don't like the fabric."  I decided that this bag was not meant to be. One should not experience injury when sewing.  I was going to make it into a simpler tote, but when I tried to I had distressed the fabric so much that it couldn't be made into anything I'd be willing to sell because of the imperfections I had created.  And when I looked at it from afar, I saw what my mother and sister meant. My fabric choices were just not fabulous.  So I did what I do and threw it away.  Then my mother rescued it and told me to make it into something cute and donate it.  [UPDATE: the fabric boo-boos were beyond repair, so it had to hit the trash anyway]. 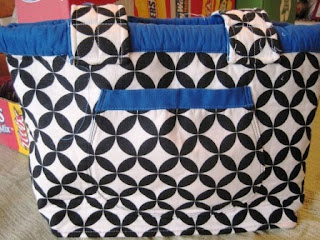 Rescued from the wastebin...you can still see my picked out threads on it.  I'm going back and forth on if I like this fabric combo or not.
I take full responsibility for the ruination of this project--obviously it's been made before, so it must be user error.  However...I think this was payback for my awesomeness earlier this week.  Something I had in my head actually looked how I hoped it would when finished: 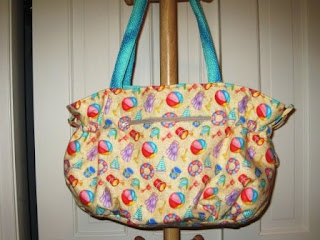 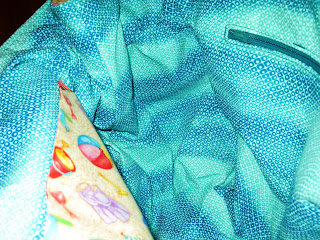 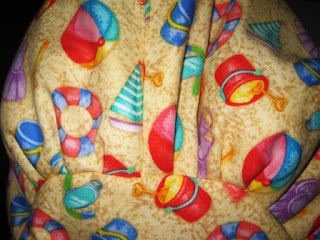 This is the Expandable Tote Bag pattern from u-handbag.  I was going for a beach and ocean combo here and I think it came out well.  The pictures are not good (apologies) but it shows the fun-ness of the fabric.
I took this to work to show it off and it sold right away. I never expected that to happen.  But it saved me from having to write a description for it in the shop.  Of course this led to several people wanting beach bags custom made so I went a little crazy ordering my fabrics the other night. But at 30% off and free shipping, how could I not?
I am going to devote my day to cleaning up my sewing area and organizing my stuff.  Usually I get inspired because I find things I forgot I had.  But my fingers hurt too much to do any actual sewing.  I wish I could say "Ah, well" but I'm still annoyed. Not because it didn't work so much as all of the time I invested in nothing. I hate wasted time...says the girl who sleeps in every weekend while there's things to make and do and see.
From the convoluted brain of Bethany at 1:22 PM