I have a very good friend from high school who I had lost touch with for a good many years, only to be reunited through the wonder that is Facebook.  Since I started trying to make some money with my hobby he has provided me with encouragement and morale boosters and some hahas.  So I was tinkled red (because pink just wasn't enough) when I saw what he sent me the other day... 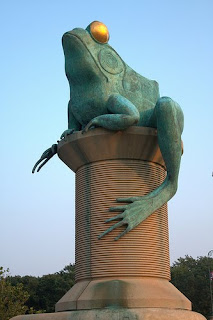 Yes, that is indeed a frog on a spool of thread.
I have never heard of this particular statue before, but in a few short sentences he gave me a full history:

"We used to live in Willimantic CT before our move last April. I thought you might like to see what adorns the bridge in town.  This town has a very interesting history. During the French and Indian War, locals thought the natives were about to attack them one night. They loaded their muskets and let out a horrific amount of firepower at the enemy. When morning came, all they found were hundreds of dead frogs. In the 19th century, it was THE mecca of thread making. ALL the best thread in the world came from Willimantic. I just thought you'd like the unique combination of histories on one statue....I tried to find a pic of the backside of the frog. The legs are clearly not frog legs. The sculptor obviously used a female model to create the legs."

I hope he doesn't mind me using his exact words but I couldn't have written it better.  Thanks, Ian! Love it!  And since I missed it on my first viewing I had to check out the legs again--definitely not frog legs.  You know you just scrolled back up to check it out again too, haha.
From the convoluted brain of Bethany at 11:22 PM