It's Christmas All Over

Happy belated Thanksgiving! And belated good-luck-on-Black-Friday! And belated any other salutations I may have missed over the past week. Time really got away from me. Between meal prep, the holiday, clean-up, shopping, and decorating, this may be the quickest perceived four-day weekend in history (and I'm only assisting and not the ringleader in any of these adventures). I feel like I want to go to work tomorrow just so I can sit down. But December starts tomorrow (to which I say yippee!!! and also--did you print your Christmas countdown calendar I posted last week?) and I. Am. Ready. Bring it. 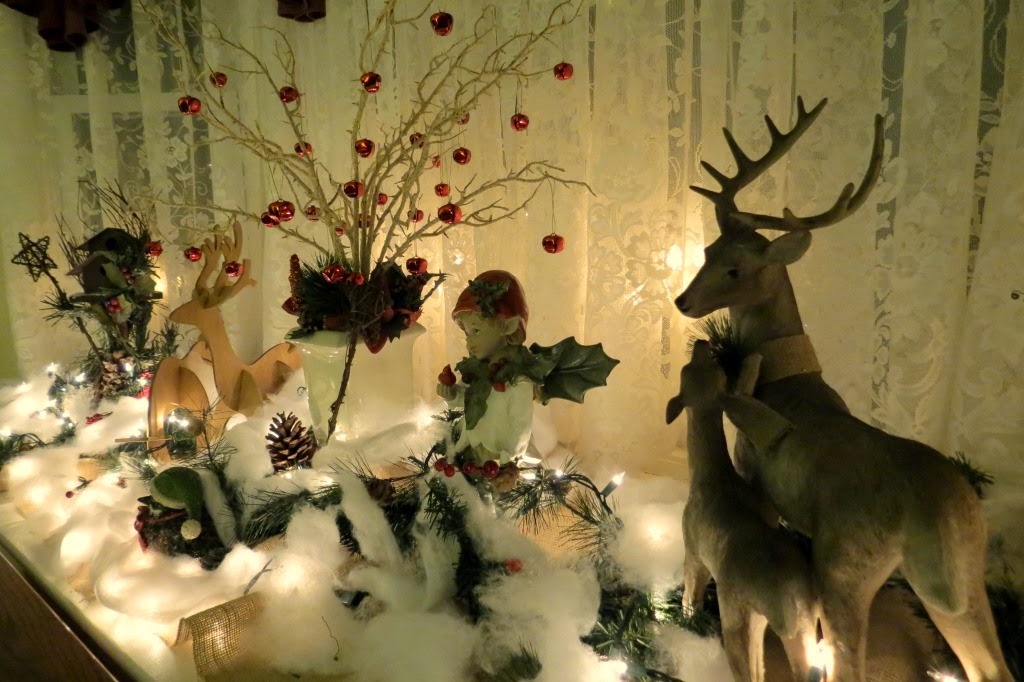 After a democratic vote took place, it was decided not to put up the fiber optic village this year. While it is adorable, it is the biggest pain-in-the-rear to set up. And with A-train being eye level with it there'd be no way it would escape unscathed. My mother bought that buck and baby deer figure to the right, so we created a more woodsy scene with burlap, branches and bells. I spent a good twenty minutes gazing at it earlier this evening. I couldn't get the lighting just right in the photo, but it has the warmest golden glow about it. 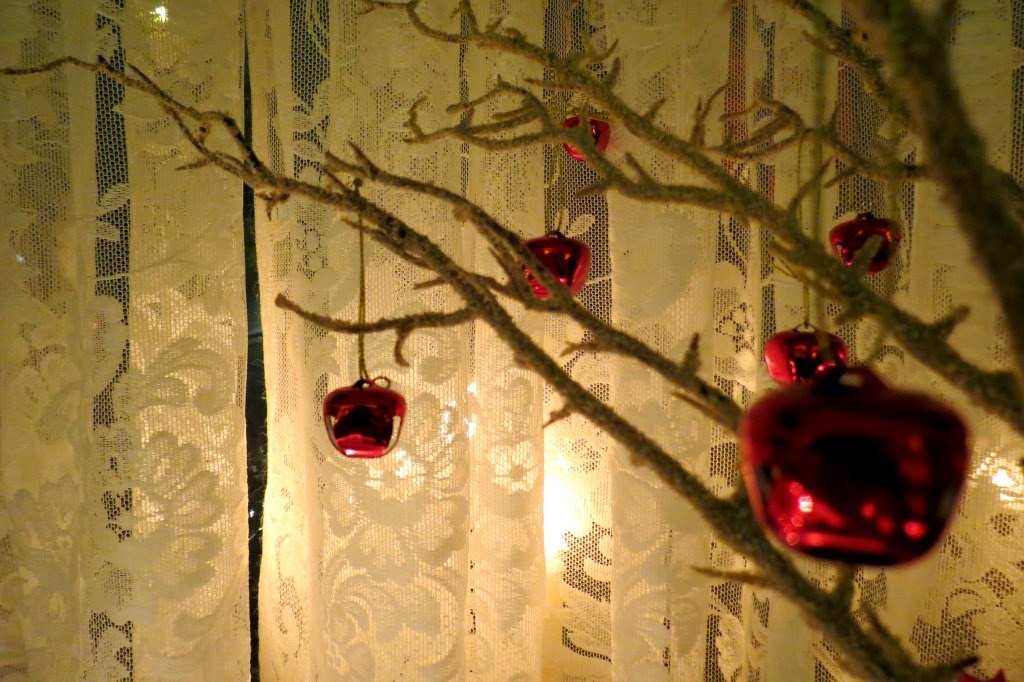 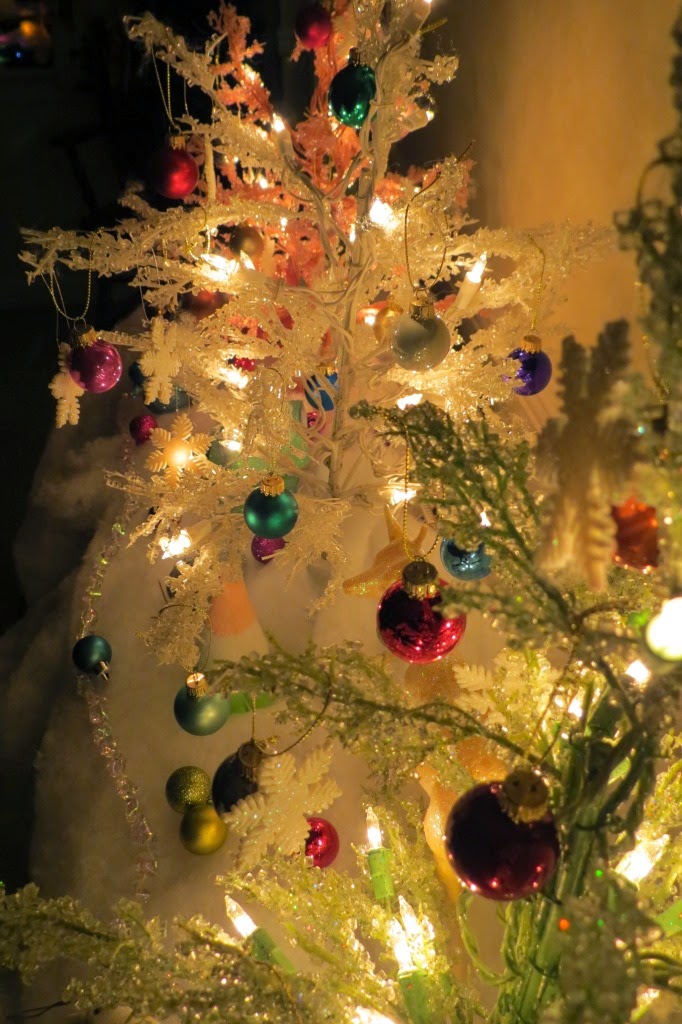 Sugarplum Forest got more sugarplummy this year as my mother bought a box of baubly ornaments in the most satisfying array of colors. My sister asked why we didn't put those ornaments on the snow in the trees and I had to explain to her that they were sugarplums that grow up through the snow due to the magic of Christmas. I then had to explain that the forest elves complained about the bare trees, and so we decorated them. 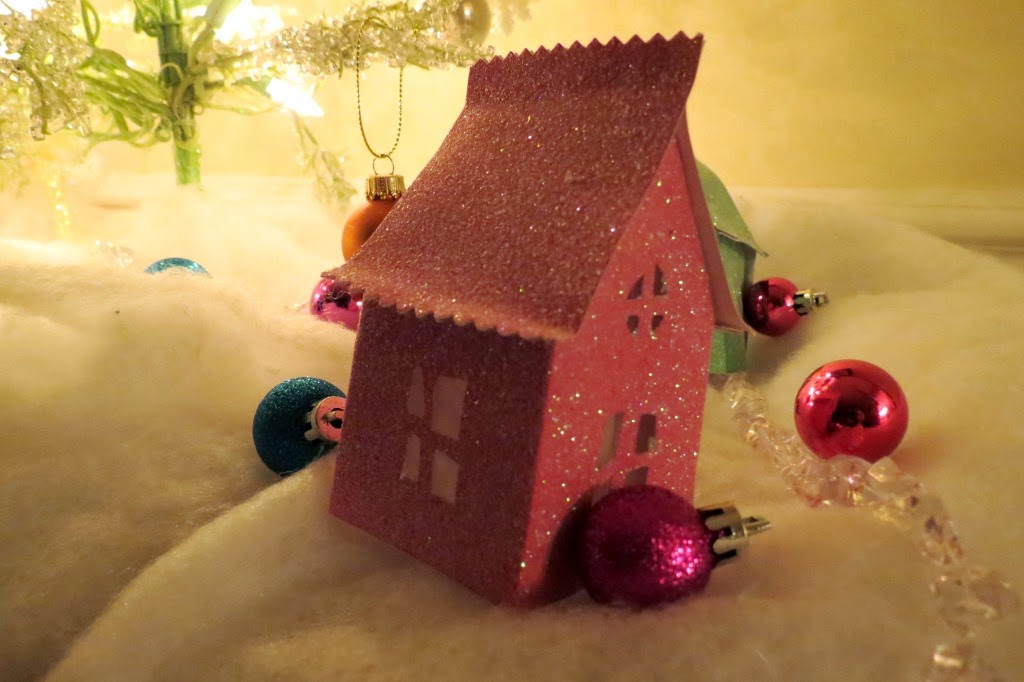 This is where the forest elves live, in case you were wondering. And no, I haven't lost the plot. I just get ridiculously giddy and silly and child-like at Christmas time. The best part is when I explain Forest politics to my sister, she just says "Oh, OK" in a tone of voice that implies that she gets it while in reality she's thinking "Please let one of us be adopted." 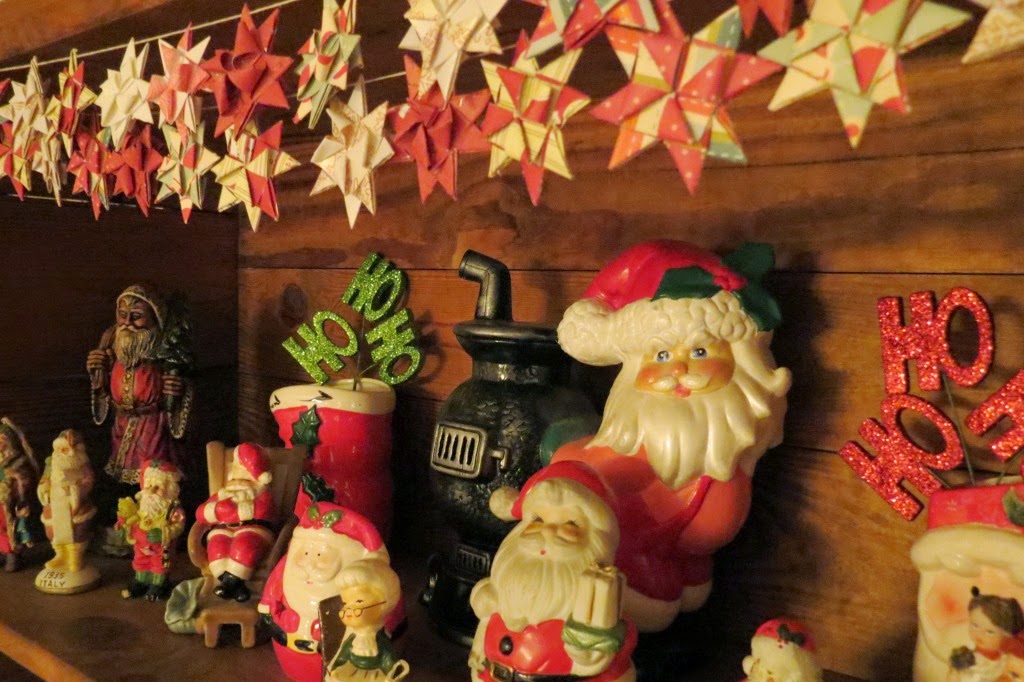 I wish I could tell you this entire shelf is full of all the Santa figurines we own, but that might be a lie. It's just full of all the ones that will fit on there.
And those stars? They're German paper stars that I made a few years ago. They're one of my favorite things as they seem to add just the right touch without being overly Christmassy. You can find a tutorial for them here. 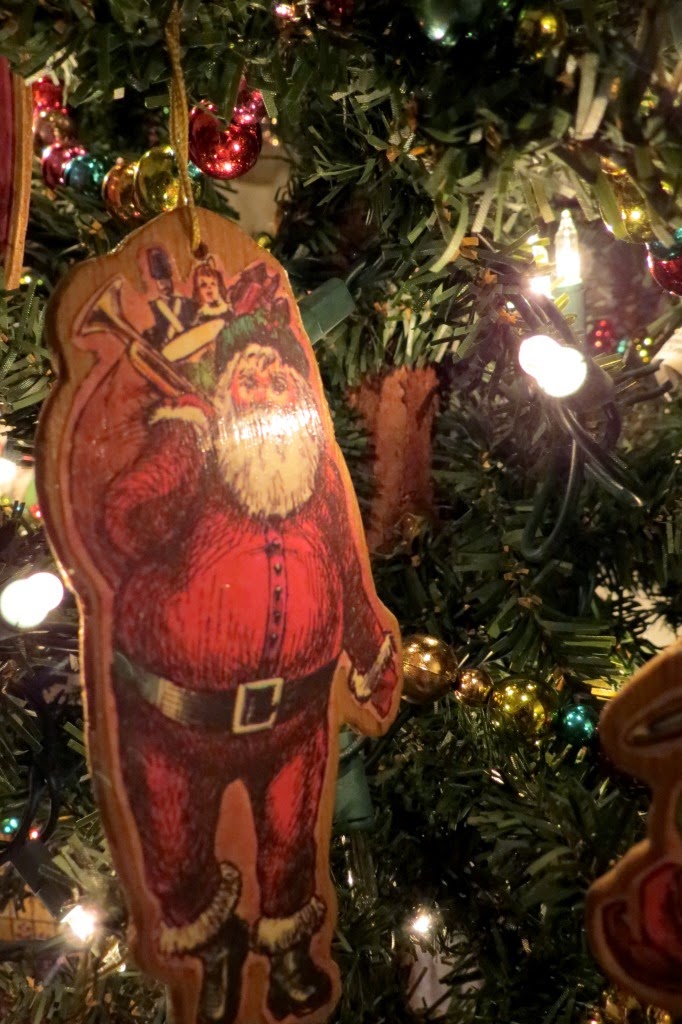 My mom and I do a lot of the inside work, but my sister pitches in before she starts to go crazy. The exact phrasing this year was "Use me now while I feel like helping, because once you guys start getting annoying I'm done." I guess I do get pretty annoying, what with constantly reminding her how I'm head elf in these here parts. 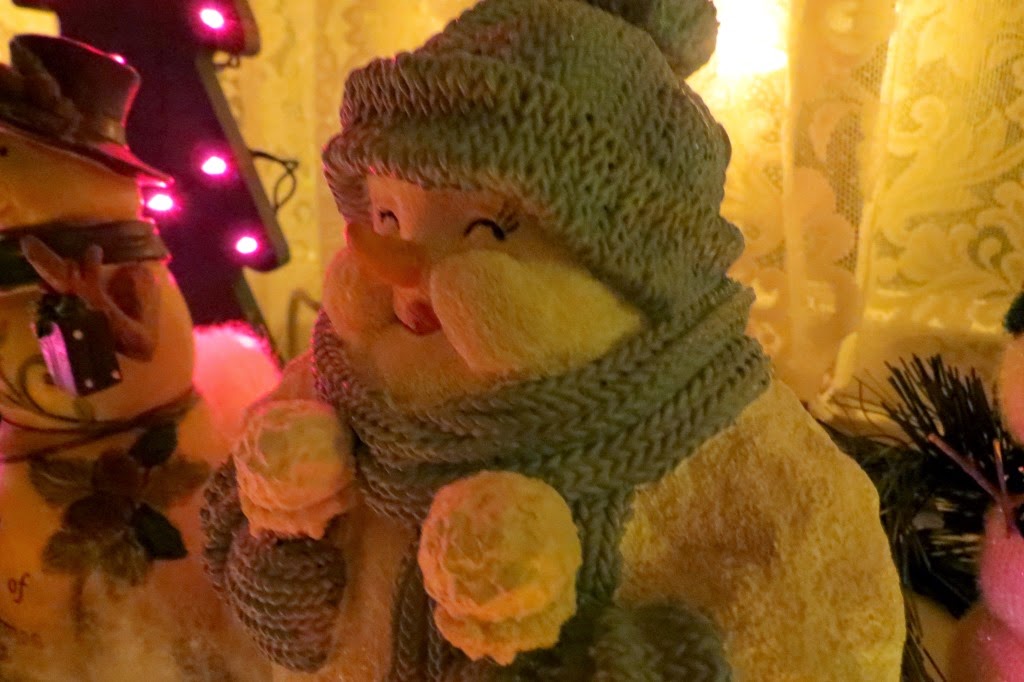 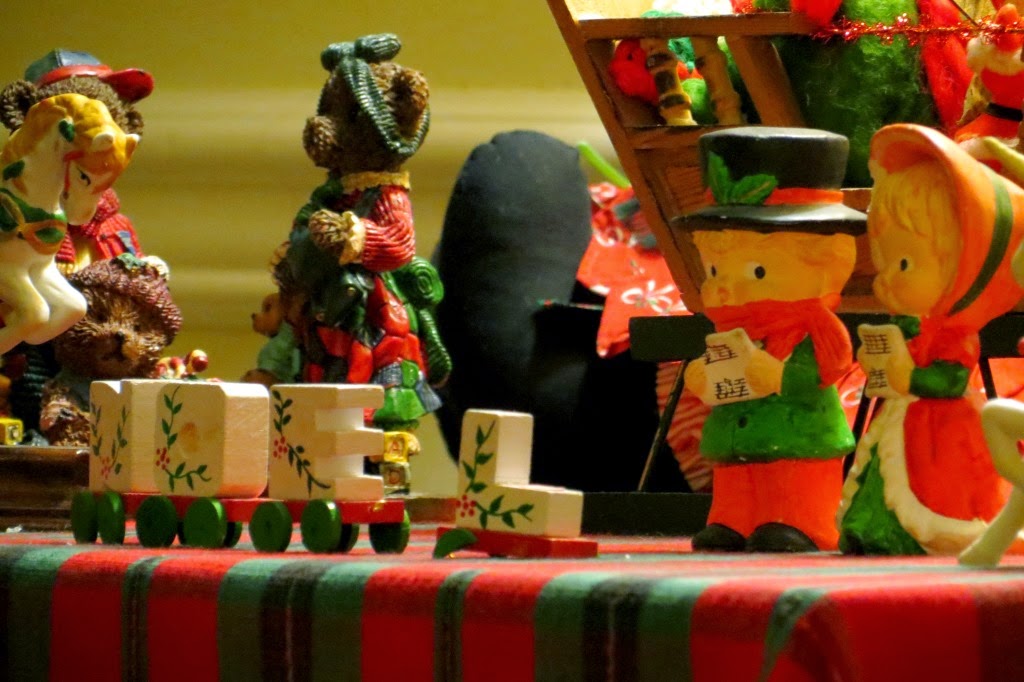 I took this photo for the sole reason that the boy caroler looks like he's giving the camera a bit of a side-eye from this angle. 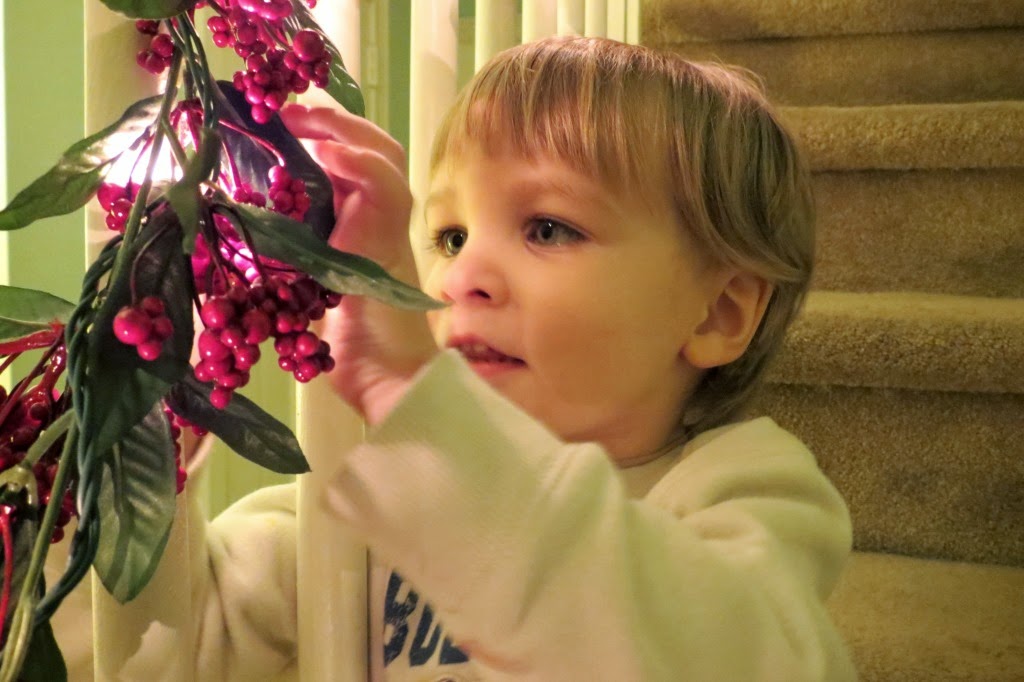 When my sister came over with A-train I tried to get a cute picture of him, but he was too easily distracted by the light. Not in an "Oooo, lights" kind of way. But in a "I wonder if these are LEDs or incandescent bulbs" sort of way. Not kidding. The cutest thing is to ask him how electricity works. "You put the plug in the hole. The electricity comes out, and goes through the floor. Then it goes into the light, and the light comes on." Or "You put that in the wall and the electricity comes out and goes into the battery. Then your phone works." I'm not even kidding a little bit. I've been blessed with two nephews with the ability to make me feel like a right idiot sometimes.

So that's what I've been up to. I knitted a few dishcloths and made a scarf for myself to go with my new coat. I've got a tutorial in the works that will hopefully be shared soon. I've got no sewing to do. And I've got a bag of yarn that is begging to be knit up into another sweater (I really might be a teensy bit obsessed--I don't think I've knit this much since I first learned and was truly obsessed with it). Oh, isn't this just the most wonderful time of the year?
From the convoluted brain of Bethany at 11:10 PM