I know. I know. I'm hardly blogging. And when I do I talk about socks. I'm sorry. My obsession has almost worn off and the excitement I felt is waning down to "I knit another dishcloth" level. Not to say I don't enjoy it or have had my fill, just that I feel much more confident about heel flaps and gussets and short rows and whatnot. I haven't even succumbed to second sock syndrome (yet). My goal is to find a pattern/yarn combo that becomes second nature and that I can whip out while watching Jeopardy and stitch away on (because dishcloths do get tiresome as that sort of project). And besides--there are some delicious sock yarns out there.

Anyway, after making several practice socks I finished an official pair of socks. And they're totally official because I wore them today. All day. To work and everything. Like a real pair of socks. Granted I put an extra pair of normal socks in my handbag just in case, but they weren't necessary. 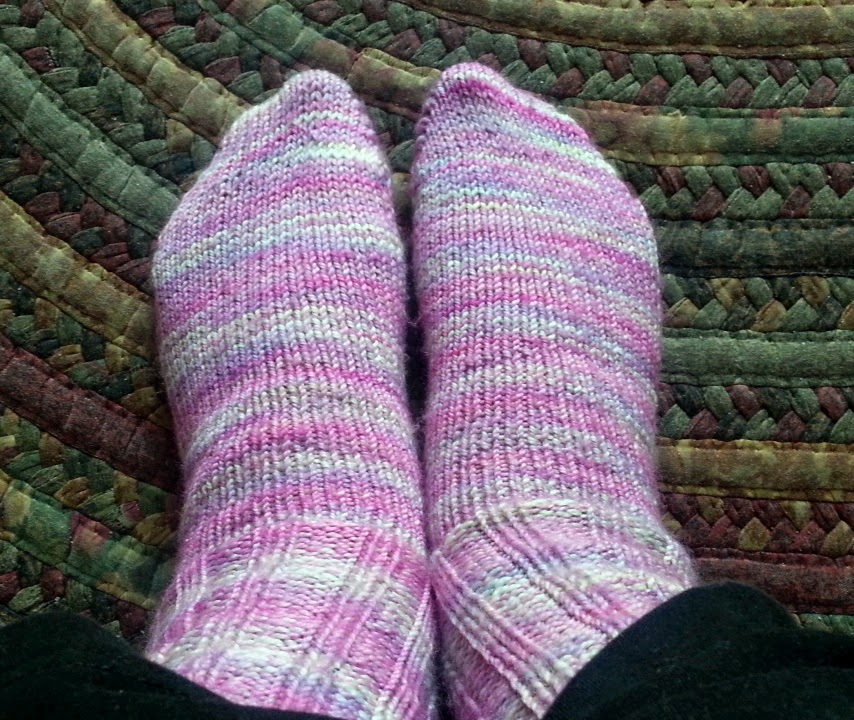 Disclaimer: my ankles are not swollen (I took off my socks and checked). The yarn is a little thick for socks, and bunches a little around my instep making it look like I have an issue. Other than thick socks I don't, hahaha.

I used this recently released pattern from Very Pink for DK/sport weight socks knit using German short rows (hence my title) instead of wraps and turns (which are methods of shaping your knitting--a little bit like darts in sewing). With wraps and turns I got little 'decorative' holes in my work, which were OK but not something I loved. The German short rows (GSRs) leave a little something behind, but more patterned instead of holey so they don't bug me at all. I also did ribbing on the entire leg of the sock instead of stockinette with a short ribbed cuff. I don't know if that affected the fit or not, and to be truthful I don't know why I did it--it would have been even quicker without doing that and might have eliminated the weird bunchiness at the ankle/instep--if any experienced sock knitters know if that would make a difference let me know so I don't get it in my head to do it again. 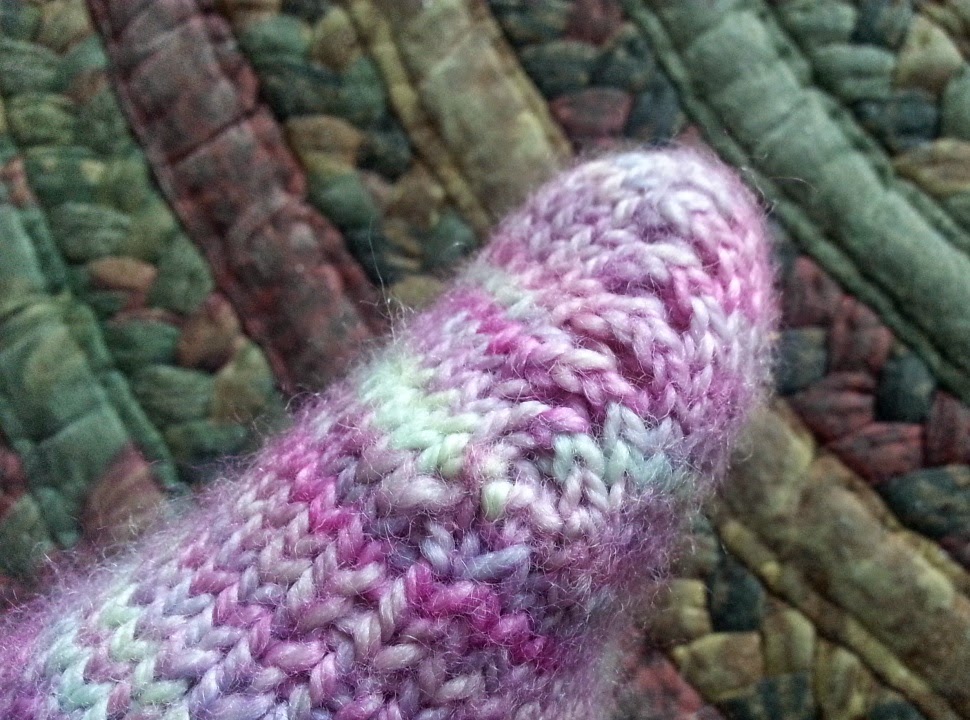 The heel was knit the same way as the toe, but as the instep of a foot is much wider, those spots become a little more stressed. I did my best to hide those stress points, but more practice is needed if I'm going to knit this style again. 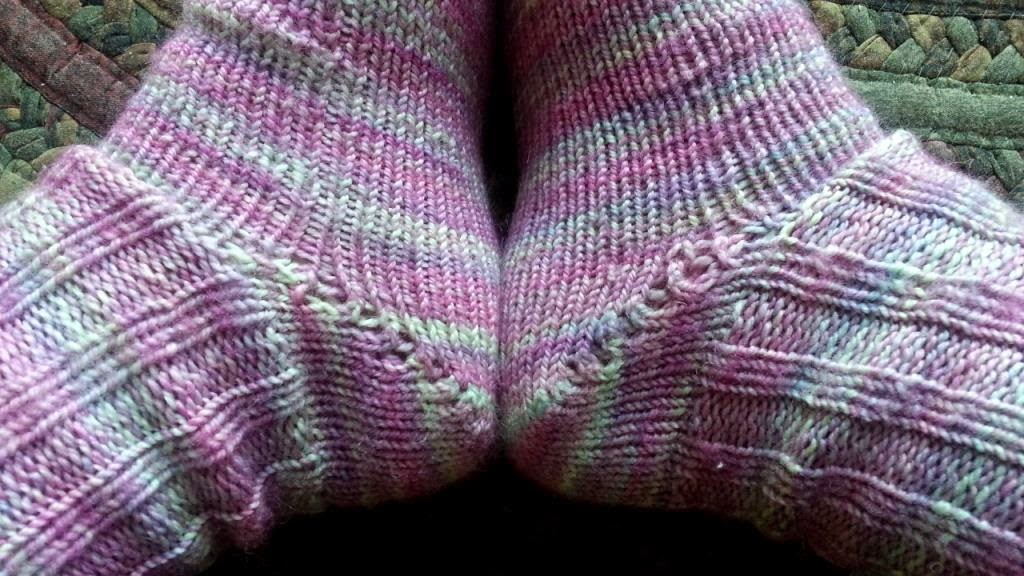 Second sock on the left is clearly much more uniform than the first crack on the right where it looks like a giant loop is hanging out (but it's not--it's just not tidy looking).

The pattern was so easy, and the thicker yarn worked up quickly. However, even though the tutorial videos claim you can wear these with shoes and boots I'm not convinced. They still seem a little too thick for anything but obviously oversized shoes or certain kinds of boots. They're warm and feel good on, though, so I've got some cozy lounging socks at the very least. 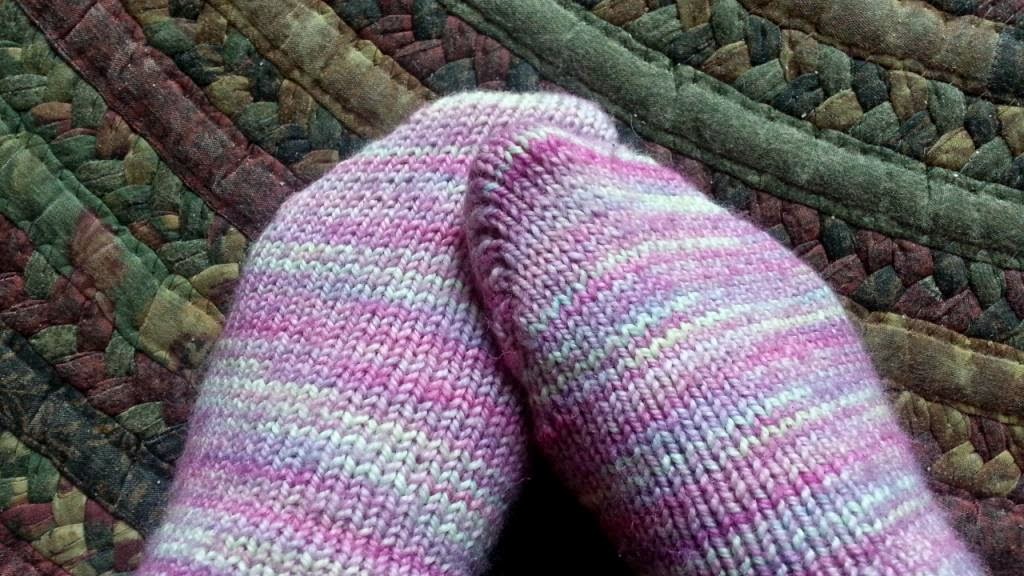 I have a cuff down pair thiiiiiiis close to being finished. They're in regular sock weight yarn, so I'm very curious to get them on my feet and test them out. And then I promise I'll sew some bags and maybe write a tutorial or something, and take pictures of my nephews and finish that quilt I started last year...but I'll lay off the socks. Swearsies :)
From the convoluted brain of Bethany at 11:06 PM