Tutorial: Make Your Own Piping

I've said it before and I'll say it again: piping make everything better. EVerything. However, the pre-packaged stuff in the craft store leaves me a little "m'eh" for the most part--it comes in one narrow width, and only in solids. I use it when it's just right for the project (like in these bags here and here) but usually I like to make my own as tiny details like custom-piping are just fun to look at.

I'm finishing up the directions for the diaper bag sew-along, and one of the big details on the outside are the lengths of piping that run around the gusset. As it's a larger bag, I like to use thicker piping, so I have to make my own. I have a piping foot (which was not expensive (I think maybe $10?) and which I highly recommend adding to your sewing arsenal), and I'll show you how that works. But I'll also show you the zipper foot method for those of you who don't have a piping foot or don't have a major need for one. As piping is a fun detail to add to things, I thought a stand-alone tutorial would work best instead of being buried in my lengthy sewing blathering. 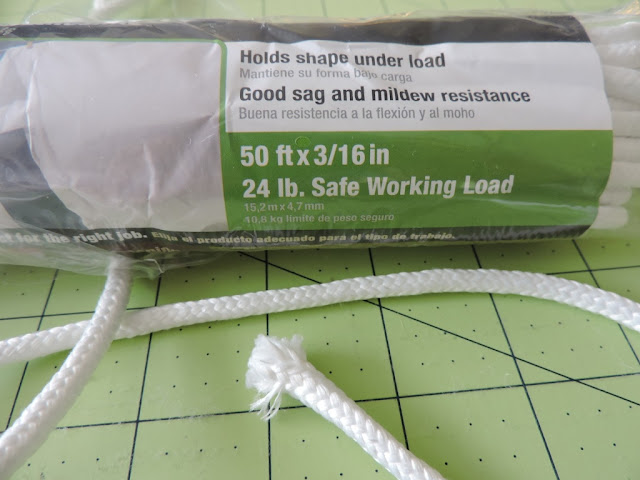 I started with a half-yard of fabric. I laid my quilting ruler on the 45-degree line, and cut a big corner off on the exact bias. I lightly marked the fabric as my ruler wasn't long enough and I had to move it up to mark the full length I needed. Don't try to be a hero: if your piping is going to go around curves (as it will in the sew-along) bias-cut fabric is essential to have that necessary bit of stretch. 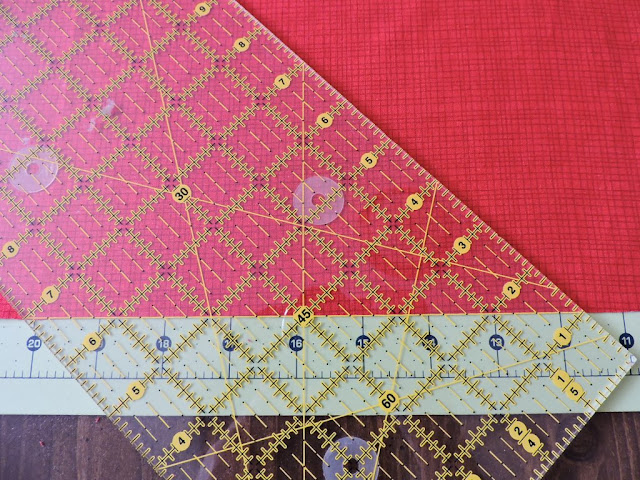 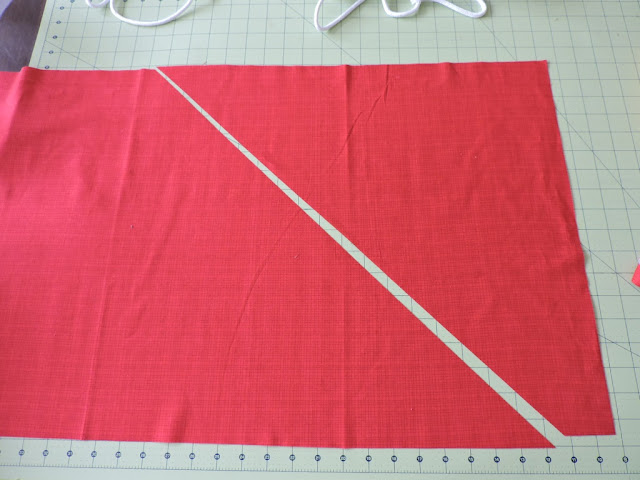 Pick up the bottom right corner and bring it up like this: 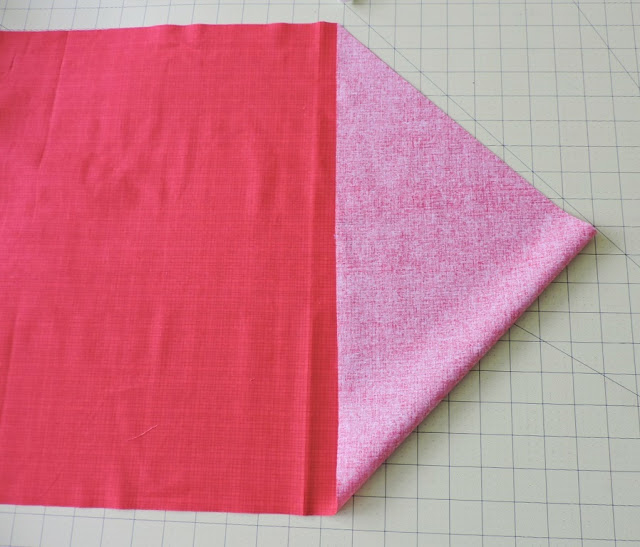 Then turn it so those bias-cut raw edges are lined up with the gridlines on the mat: 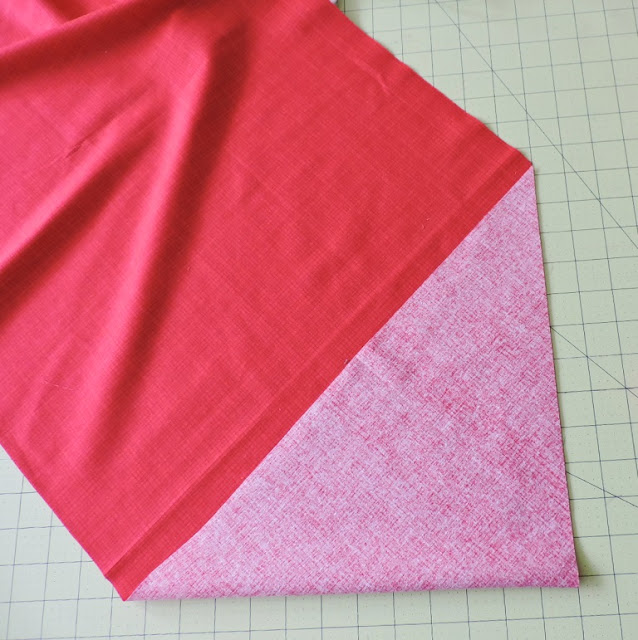 If you haven't got a mat you can simply use a ruler and fabric marker to draw lines and cut on those. You'll need to cut 1 1/4" strips, enough to suit your project. For the diaper tote we need about  2 1/2 yards, so I cut five strips from my half yard: 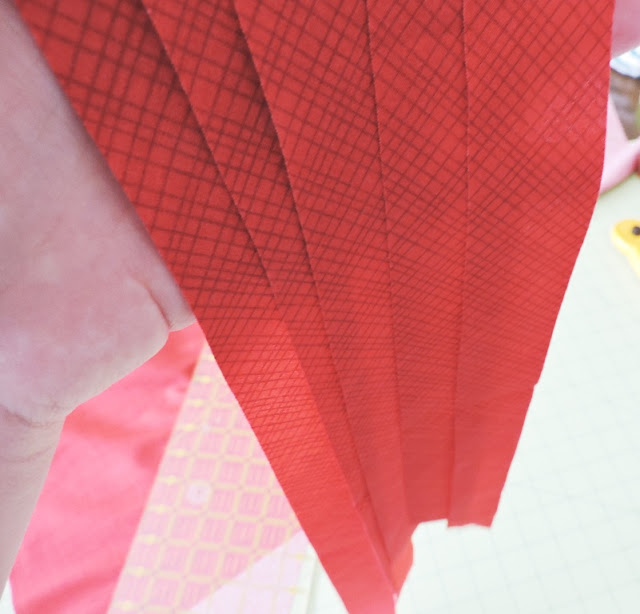 If you've made bias tape before you'll be quite comfortable with this next part. Take two strips, and with the right sides together line up the edges like this: 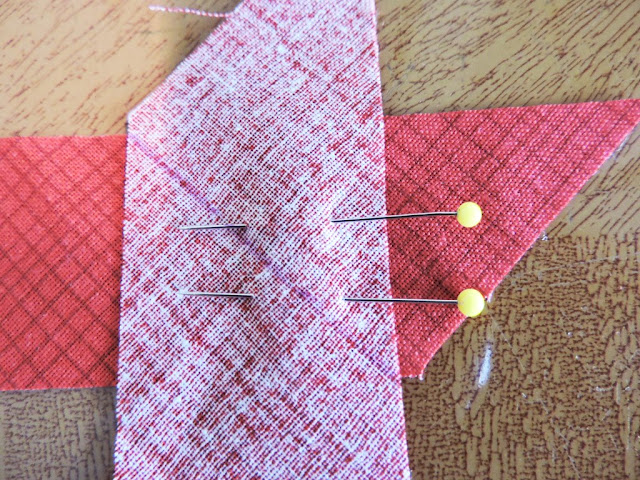 You can barely see my purple line I drew, but draw you'll want to draw a diagonal line from the upper left intersection to the lower right and then sew on that line. If you've matched it all up just right, when you lay your tape flat it'll look like this: 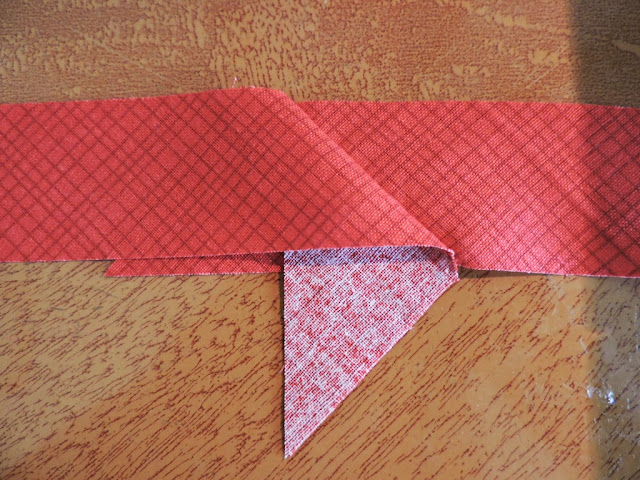 If it doesn't try again. Trim to a quarter inch seam allowance, clip the teeny dog ears, and press the seam open. 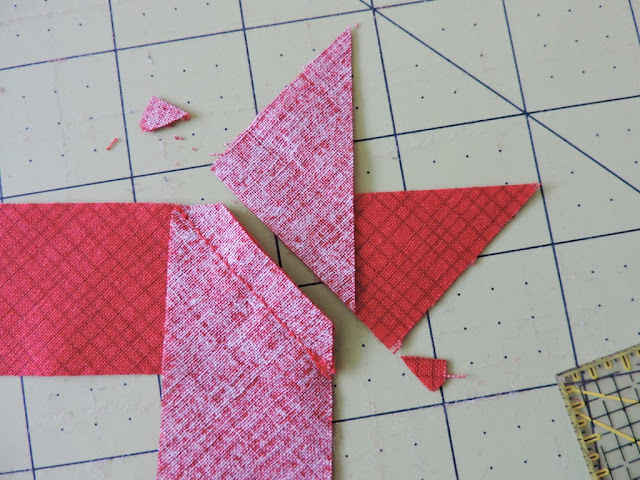 Continue sewing your strips together like this until you've got enough. Now we'll make the piping. A side note: I used to press the piping fabric in half, but I found that to be less than helpful. I have found it to be much easier without the crease trying to 'repel' the cord, so to speak.

Take your piping cord, lay it within your piping tape, and match the raw edges (clips are really helpful here, but pins will do the job, too). I like to leave a bit poking out of the top. I'm wild like that. 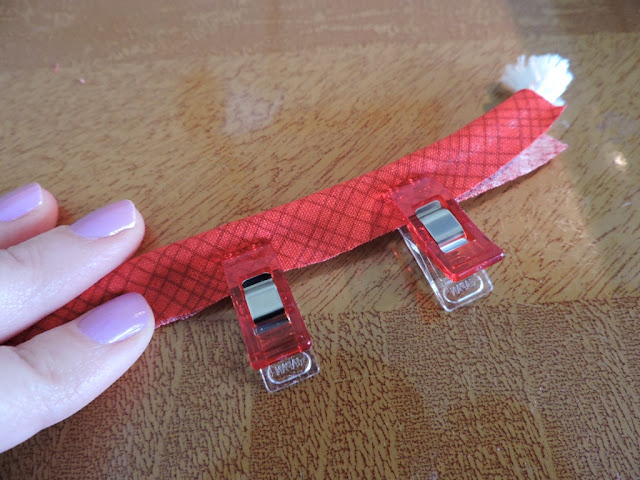 If you've never seen a piping foot, it looks like this: 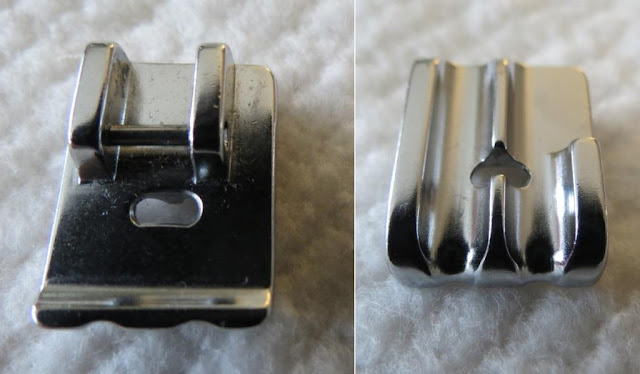 Those little channels underneath are what keeps the piping nice and snug as you stitch. You simply pop this onto your machine like any regular old presser foot. Then insert your piping so that the corded part is feeding into one of those channels (I like to leave a few extra inches just in case the leading edge tries to get wonky before I get going). 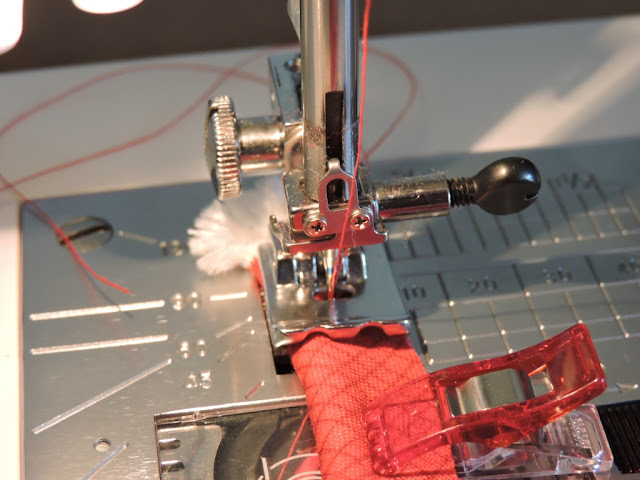 And then sew. I usually don't use pins or clips (maybe one about six inches from the foot that I continuously move as I go along), but use my fingers to keep things straight and the edges even, gently pulling the fabric smooth. 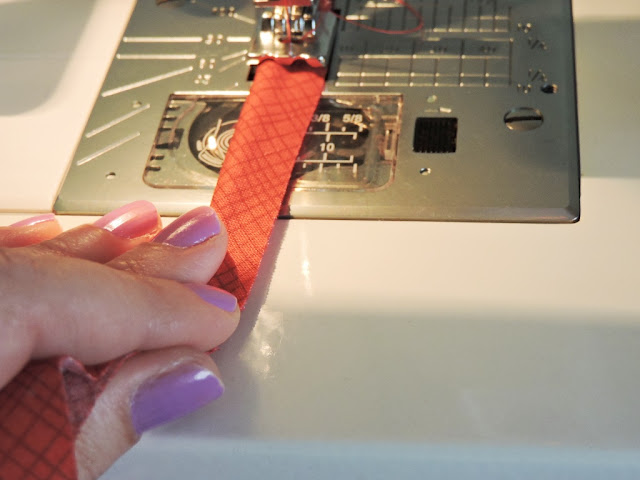 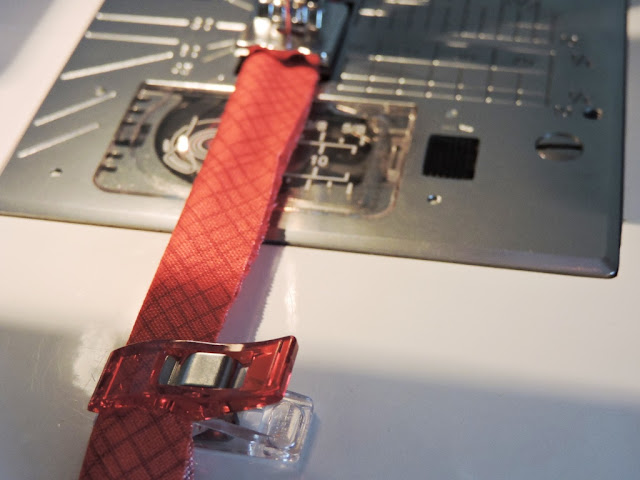 How fun is this to have shooting out of the back of your machine? 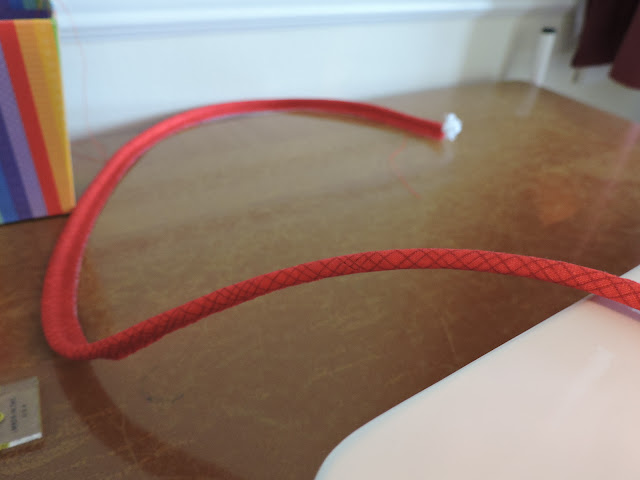 Most sewing machines come with a standard zipper foot. I use mine only for sewing concealed zippers, but it's another way to make piping. Once you've sewn the strips and are ready to sew the piping, you will attach your zipper foot and place the wrapped cord like so: 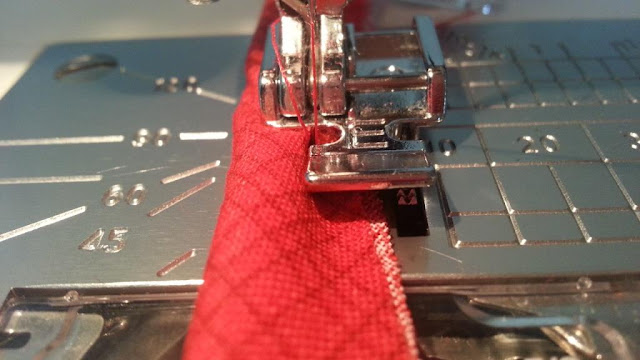 There is a wee notch on both sides of a zipper foot (intended to fit over the teeth of a zipper), and this is what will keep the piping in place.

If you'd like you can move your needle to the left a bit to get closer. And then you stitch. 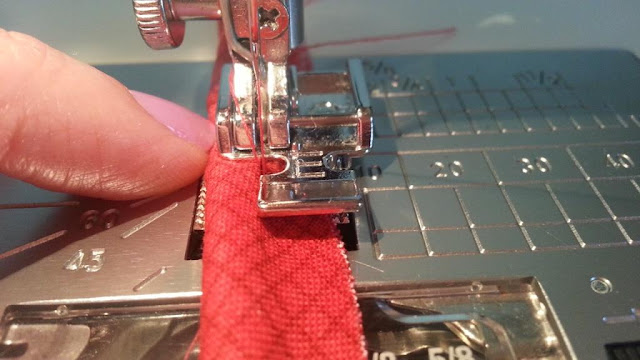 I found it necessary to keep my left index finger as above to remind the piping who was boss. I used my right hand to gently pull on everything to keep it straight and smooth. While stitching this way is a little slower, it is a fine alternative to the piping foot. It takes a critical eye to see the difference--can you tell?

The top one is the zipper foot. You can see how on the bottom piece the stitching hugs the cord just a little bit closer, BUT I did not move my needle to the left which would have had the same effect. No matter how careful I am, I always end up with that little bit of an uneven edge due to the pressure of the foot and how it presses the fabric around the cord. This is not an issue when I sew it in as I use pretty much the same stitch line as is on the piping, and you can see there's a nice bit of fabric in the seam allowance still.

In the interest of having options, I found this tutorial for using fusible web to make piping. I've never tried it, but if you feel one of the methods above is not working (or has not worked) to your liking give it a try.

Next up? The supply list and the cutting and prep instructions.
From the convoluted brain of Bethany at 10:21 PM