After all these years together I'm going to let you in on a little something. I don't like sewing zippers. There, I've said it. The secret's out. Yes, I've got a handful of zipper tutorials. And most of the time I tell you they're easy because I tend to choose styles where the zipper insertion is easy and the result is nice and tidy. But that isn't always feasible. When someone says "I just want a simple zippy pouch" I slightly cringe on the inside because it's the type of zipper that makes me categorize all of them as dastardly (though I'm not usually a one-bad-apple-spoils-the-bunch type of person).

I tend to just stitch in the zipper, trim the bulk, poke things out as best I can and hope for not-a-mess. Usually that works out well enough, but I'm always on the look-out for a new technique to try. I recently ran across a tutorial I had pinned and figured I'd give it a shot since I just had a request for a small purse for odds-and-ends to sit in a bigger handbag. Here's the result. 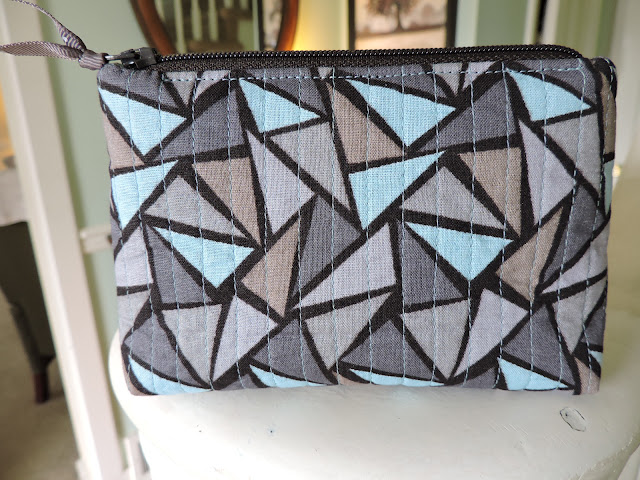 Isn't the fabric kind of nifty? It's a fat quarter from Joann's. The stitching makes it look like rain running down a stained glass window. Anyway--I made a simple flat-bottomed purse (tutorial here), but did the new method for the zipper. It's supposed to keep the corners neat (and I don't have any dents near the top corners so it works in that respect), but I feel as though the zipper is a little bit limited with how wide it opens (or doesn't open--it's good enough but not great). There's also fusible fleece in there, so that extra bulk might have affected things as well. 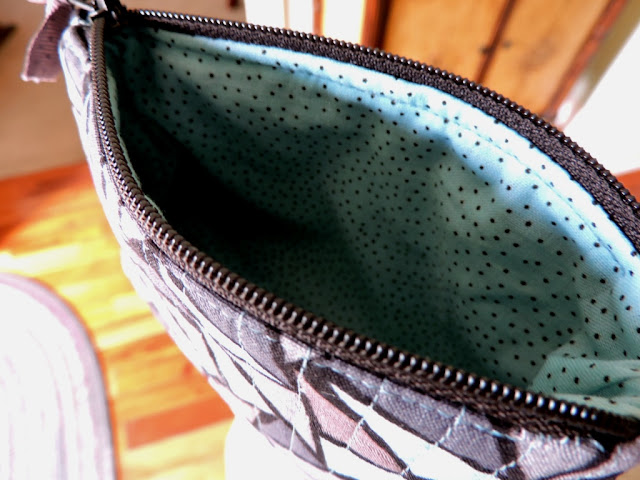 I also wasn't a fan of hand-stitching the gaps near the zipper closed. It certainly isn't my neatest work ever (I did have a photo of it that now I can't find, naturally). If I was thrilled to the gills with the result I'd get over it. It's good strong stitching, though, so it'll hold for sure. 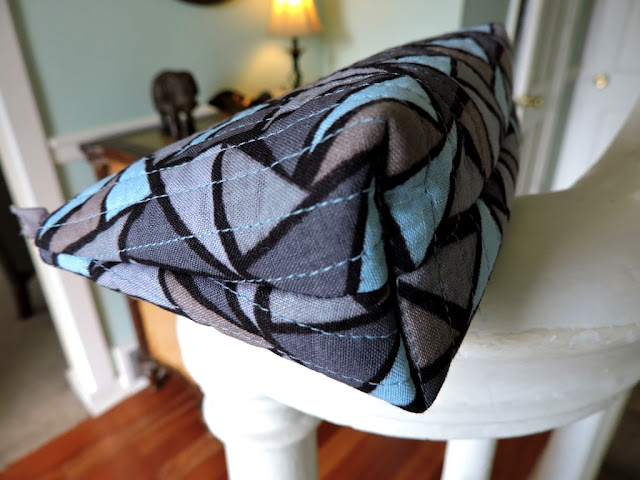 The purse itself is a really nice size. It's four by six inches with a two inch flat bottom. It holds a bunch of stuff, too--I filled it with purse junk to test it and it's roomier than it looks.It really didn't take much time at all, even with the finicky hand sewing--I think the quilting took the longest. As with this bag, my dissatisfaction stems from things that only the maker would know about. And the descent of my high hopes for a perfect zipper method.

So--do any of you have a magic method for neat zippers across the top of a purse? I should know this by now, but I don't sew these very often that I devote much thought to the matter, and I'm usually OK with small zipper dents because I'm a vigorous corner-poker-outer. But now that I've tried one way it's going to be on my mind. Your thoughts?
From the convoluted brain of Bethany at 7:05 PM