I love it not, but I love it anyway

Did you ever start to make something, and your sub-conscious kept poking your conscious and saying things like "I wouldn't do it this way" or "I think you should change course" until it changed to "I told you so" and "You never listen to me?" When it does that you should seriously listen. I've made a bag or two and learned a lot along the way--what works best for me, what I'm most comfortable with, what order of operations will give me the best results--all those things that lots of practice will instill in you.

A few weeks ago I came across a free pattern for a really cute duffel bag (bee tee dubs--did you know the duffel bag was named after the Dutch Belgian town of Duffel, so called because the fabric used to make them was originally sold there? Now you do. You're welcome). I found some really cute fabric at Joann's (is it me, or are they really stepping up their fabrics a bit? I'm finding a lot more variety than I used to) and got to it.

So I cut and fused and all that jazz, determined to follow the pattern as written. The first stumbling block was the straps. If you've sewn with me you know I prefer the bias-tape method of making straps. This bag had me doing the sew a strip and turn it inside out method. This proved near impossible and I had to remake the straps (which I stupidly still did not do my way). I then sewed the bottom panel, thinking "this is super bulky and might be an issue" (and kept going). I left the room to get more water for the iron, saw my progress thus far upon returning and thought "I should just make a regular tote instead of a duffel--I like the layout of everything for that" (and kept going with a duffel bag). The side circles went together OK, complete with piping (I also thought at this point "hey, these would be cute hot pads--I should do that instead and make a tote." And kept going).

So short story long, after breaking two nails, giving myself a headache, and producing a healthy blue streak of bad language, I finally admitted to myself that there are certain things I am just not good at, and one of them is definitely that style of bag where the zipper lays across the top and sews into a side panel (like a duffel or crescent bag--I've never been successful with either style). So I deconstructed a bit and made a tote, leaving a lot of the elements in place for sanity's sake. 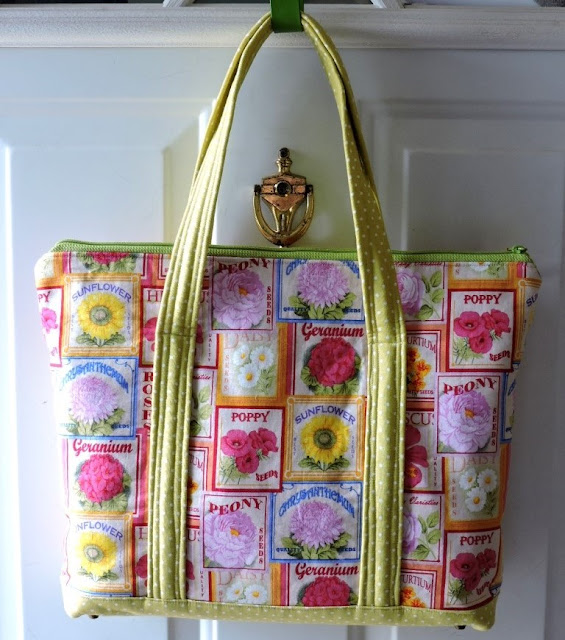 If I had made a tote from the outset the only thing I'd have done differently (other than slimming the bulk) is to make the part on the bottom more prominent on the sides so more green would be visible. The straps aren't a bad length, but I'd probably have added a few inches. It ended up being a nice sized tote (after a smidgen of trimming after un-duffeling it), and I've been using it for smaller knitting projects. 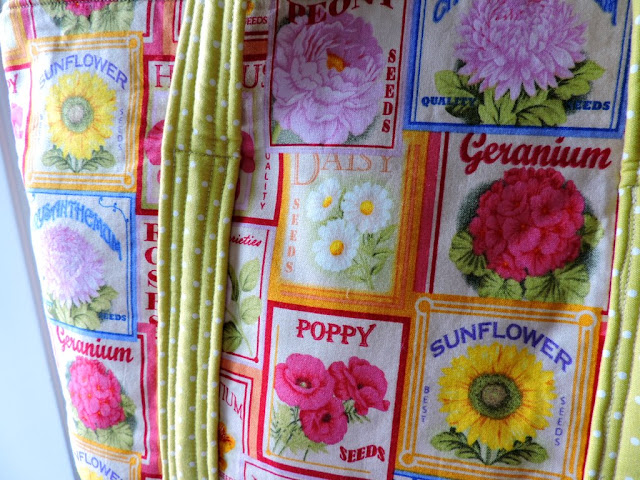 Isn't that fabric the cutest? The colors are bright and vibrant and perfect for warm weather. 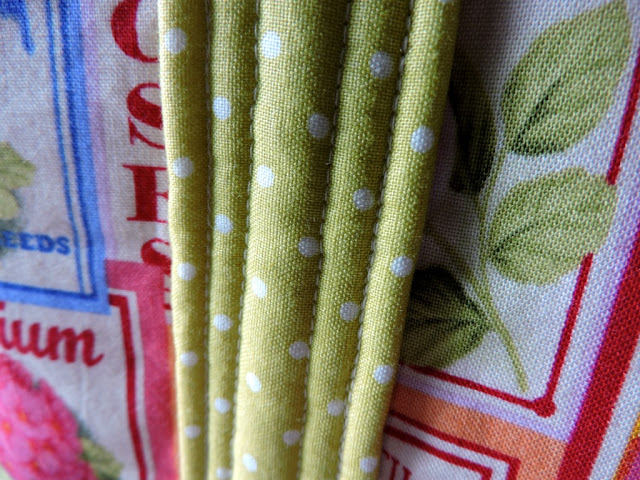 That large part in the center of the strap is a necessary evil, haha. I try to space my stitch lines more evenly, but that's the seam in there--quite a bulky little bugger to sew through. Not bad visually as an unintended design element, but not very pleasing in a tactile sense. 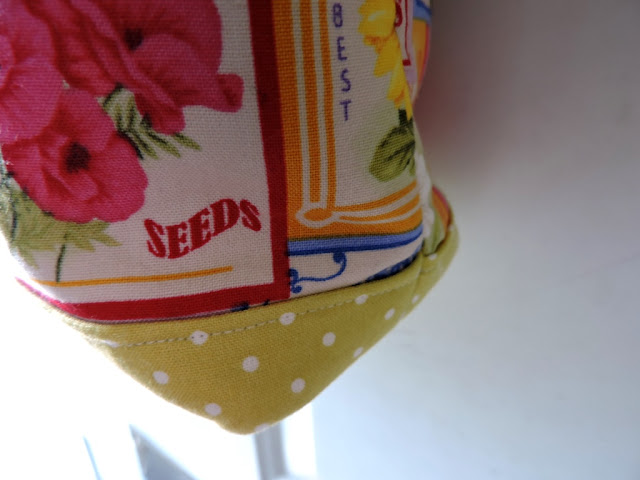 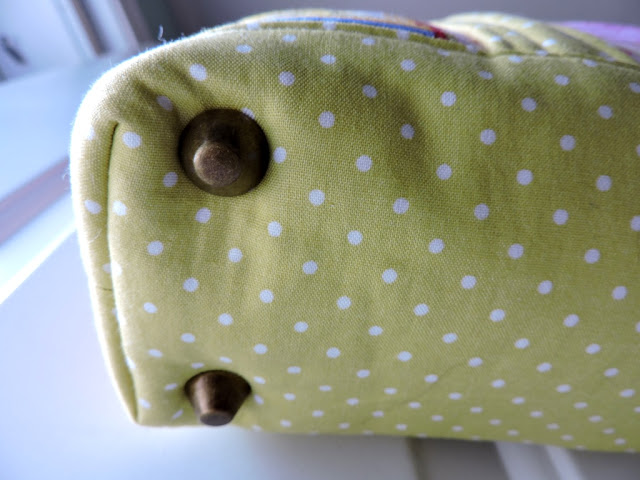 I also probably would have left the feet off if I had listened to myself. Having put them in near the beginning my fabric was already cut there, so I had to leave them in. Their placement is really what kept me from being able to have a bit of a taller tote with more green on it--if they ended up any higher my bag would look like it had oddly placed bronze nipples.


By the time I got to stitching everything up into a tote I was beyond caring how neat the zipper looked, so it's not my best. However, a happy little ribbon scrap cheers it up nicely. 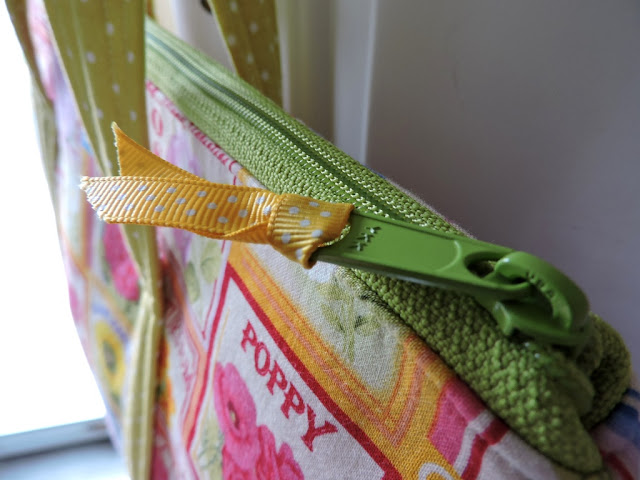 So that's that. A bag I didn't mean to make, that is full of little things that irk me a bit but that I love at the same time because I just dig those fabrics so stinkin' much! Next time I'll listen to me. Then I'll hopefully end up with a bag I love so much that we'll get married.
From the convoluted brain of Bethany at 8:26 PM