Before I say anything else I'm going to apologize for these photos--we've had nothing but the gray gloomies here for weeks, so I only had indoor lighting to work with. OK, disclaimer out of the way.

For Christmas, I received several delightful books, one of them being 'Scandinavian Gatherings' by Melissa Bahen. 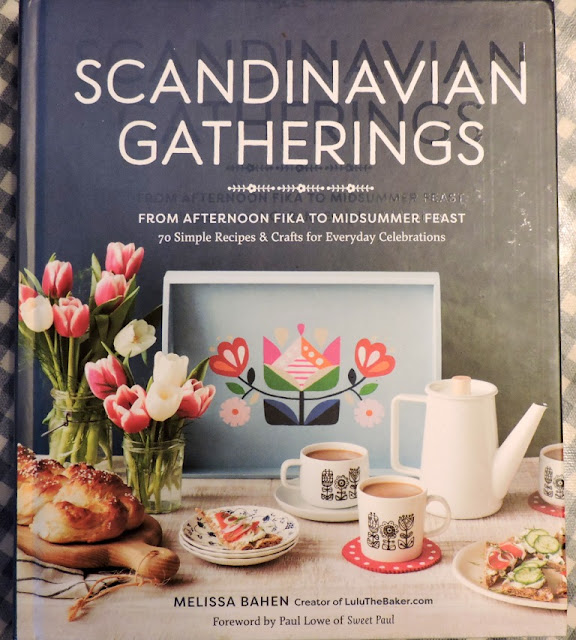 This book is a beautiful collection of recipes and crafts made in the Scandinavian tradition. A few days after Christmas I made the heritage feast (Swedish meatballs, Finnish potatoes, and Danish cucumber salad--the rice pudding was nixed based on the fact that we had been overindulging all week and didn't need any more calories). I didn't have the chance to make anything else since then, until this past weekend. When perusing the book on Christmas, we all agreed on a single recipe that would be an absolute must to make at some point, and that 'some point' was my nephew's birthday (which fell on Superbowl Sunday). And that recipe was "Mom's Maple Pecan Rings." 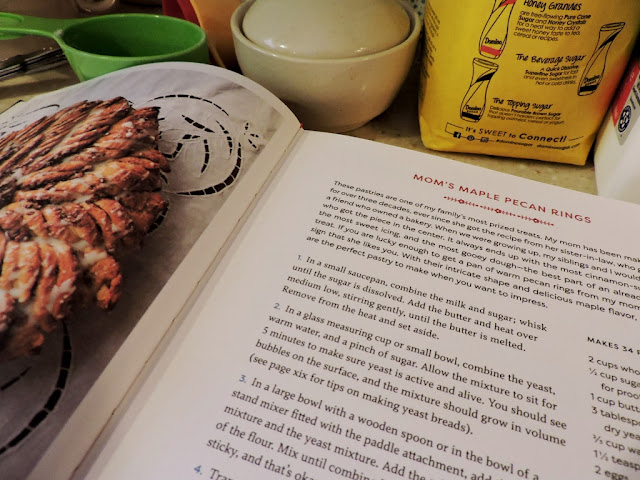 I've never made much beyond cookies and boxed mix cakes, so I was a bit apprehensive. It starts off well enough with butter, milk, and sugar being melted together--and if I'm being honest, it could have stopped right there and I'd have been happy, because that's a fabulous combination. 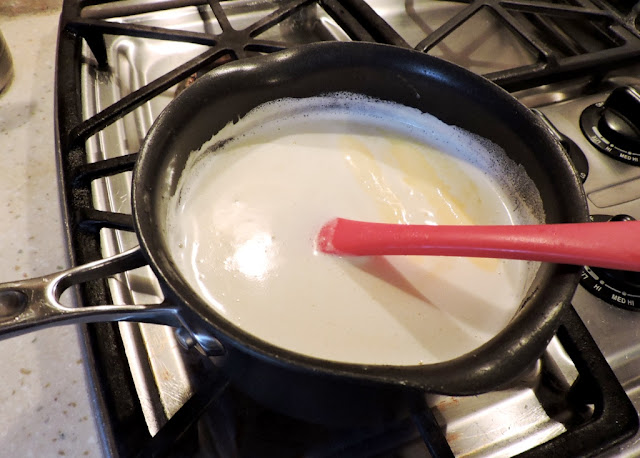 Then you have to proof the yeast (which is interesting to watch). And then you practically snap your wrist off trying to mix it all with flour because you don't have a fancy mixer with a paddle attachment. Then you make the dough sit in a warm spot all by itself. Do you know how hard it is to let a bowl of dough sit quietly for an hour so it can rise? I made the filling while I was waiting-- 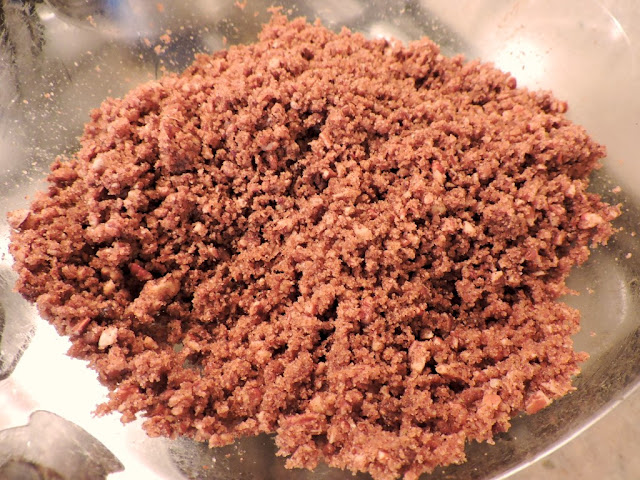 So butter, maple flavoring, pecans, cinnamon, and sugar make a delicious concoction that I'd be happy to make a meal out of. When the dough is done rising, you knead it (which is fun--no idea why my dad uses a bread machine to make bread), separate it, and roll it out, layering the dough with the filling until you end up with three layers. 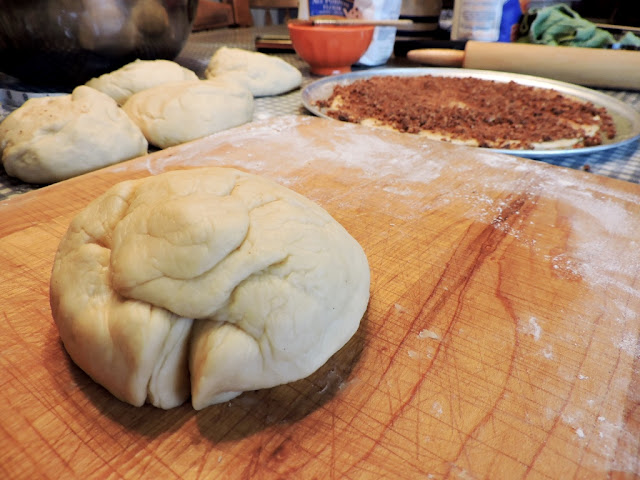 You cut a circle in the center, and snip some wedges until the whole thing looks like a dresden plate quilt block. 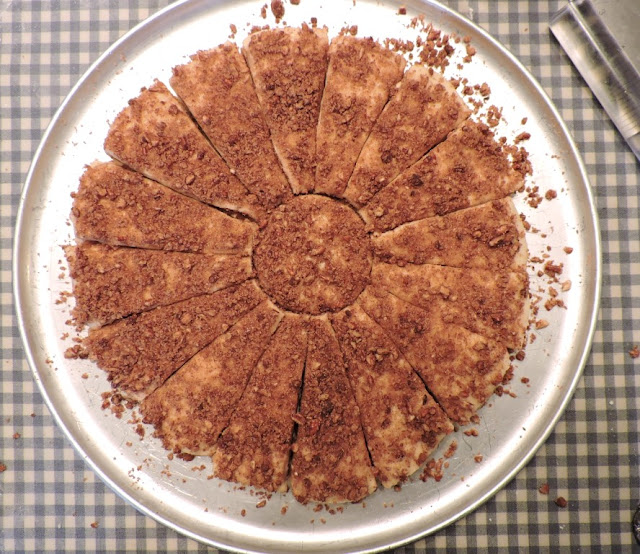 Then you grab the wedge edges, give them some twists, let it rise again (this recipe makes two trays of this and I forgot to do this to the first one but it didn't make much difference to my eye), pop them in the oven, and let them fill your house with a delicious aroma. 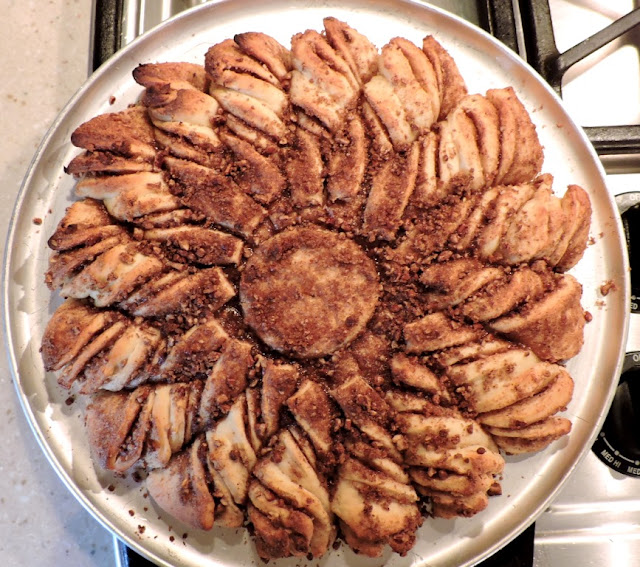 While this bakes, you make up a simple icing that gets drizzled all over the warm maple ring. 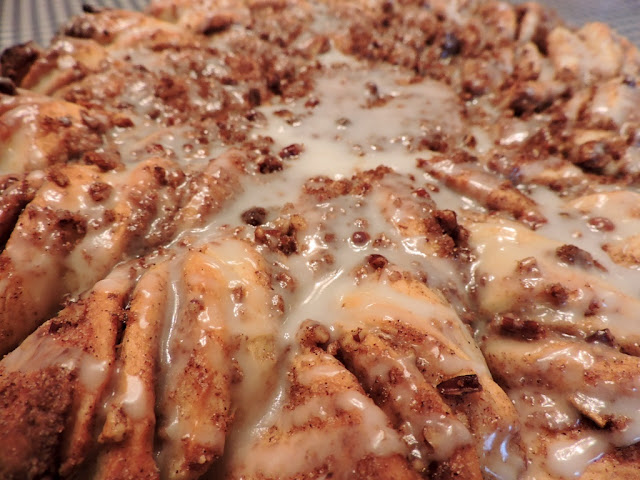 Including the time it took for the dough to rise, these took about three hours to make, but were not difficult at all (my nerves were for naught). The hardest part was not being able to sneak a taste.

Almost every last wedge went at the party. They've just the right amount of sweetness, but they are very filling. They're definitely more of a breakfast treat than a dessert, BUT I can't imagine what time you'd have to wake up to have these ready for breakfast.

So far, I am in lurve with this book. There are buns and breads and pancakes and beverages galore, as well as some really doable crafts. I've never had a book before where I want to make every single thing in it. Every. Single. Thing. I didn't get this book for free (well, I sort of did because it was a gift, but that's a technicality), this isn't a review of it, it's just something I really love and wanted to share. I don't think you'd be disappointed if you added this to your 'want' list.
From the convoluted brain of Bethany at 10:29 PM