I have not been on a proper vacation in five years (a proper vacation being one where I am away from work for an entire week instead of just a few days here and there). Until now. Excitement started building with random group text messages: "Guys, it's 53 days away." "Four weeks exactly!" "In two weeks we'll be sitting on the beach!" And finally "OMG, do you believe we leave tomorrow?" We did not journey to lands afar, but simply headed east to the shore of our childhood, LBI (Long Beach Island). It was my parents, their children and any spouses, and any of their children's children. And the dog. A nice tidy group--large enough for fun, not too big to coordinate things easily.

We went through the "chores" part of arrival quickly, slamming sheets on beds and putting clothes away, putting away groceries and deciding on dinner (easy: pizza). We made our way to the beach, only to be told pretty quickly we had to get off the beach due to an impending storm. 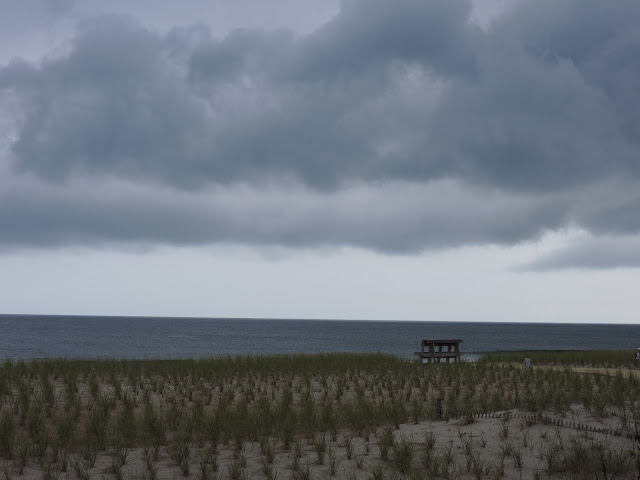 Complete with thunder and lightning, the storm sent us inside with mutterings of expletives, followed by "Can you believe this?" 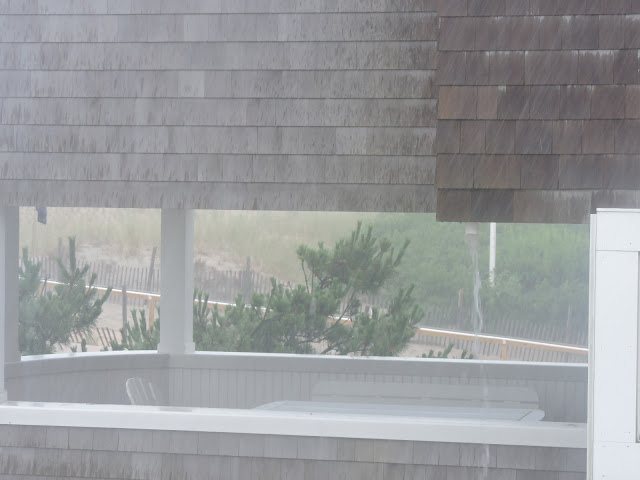 And so the weather continued all week long. Clouds and rain, followed by sun and blue skies, and back and forth and back again. On the second night the rain and winds were so bad the island was partially flooded in certain spots, and I was shaken awake with "Wake up!! The rain is coming through the ceiling!" With that quickly sorted (and a visit from a roofer the next day) the week carried on. 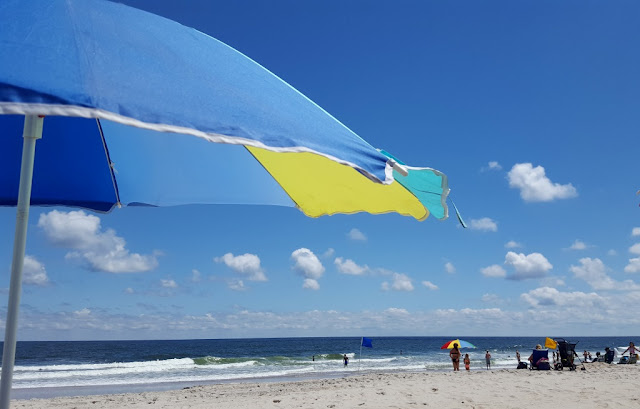 We got in substantial beach time, either waiting until the clouds cleared in the morning, or leaving when they rolled in towards late afternoon. I slathered on sunscreen and dove into my book, while others dove into the ocean (with its varying wave sizes and roughness) or argued over proper sandcastle construction.

For dinner, we paired off and each group took a night to make dinner. We also went out to eat twice. We ate very well, lemme tell you. The second night we ate out the restaurant was right on the bay, so we came out to be greeted by a beautiful sunset (which looked different depending on where you were standing)-- 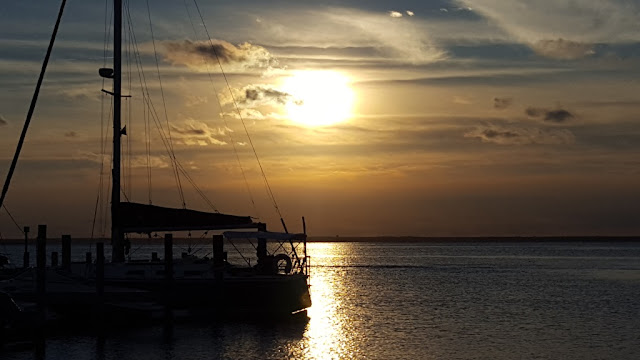 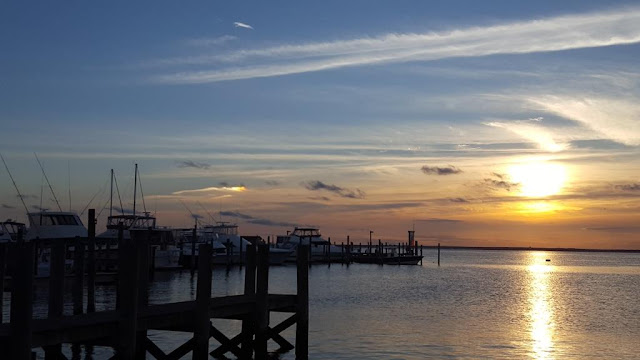 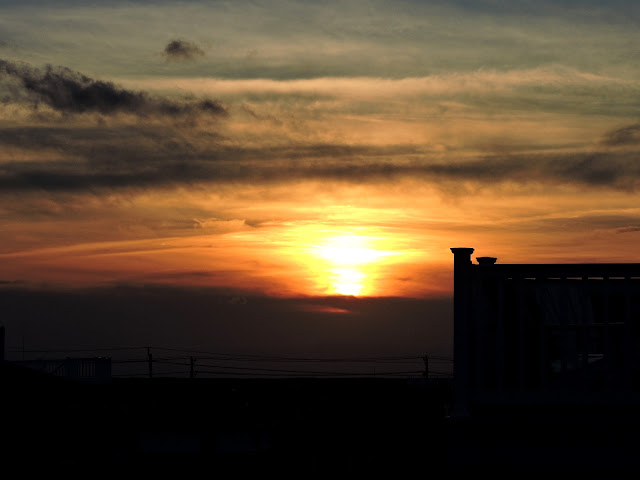 If you've been coming here any length of time them you know one of my favorite things is a good sunset silhouette (I imagine I'd love them at sunrise, too, but let's be real here).

We had a nice house right on the beach this year--there were multiple decks for hanging out or solitude, for launching water balloons or taking photos. Like of this seagull--I took this from the third floor deck all the way down to the water's edge-- 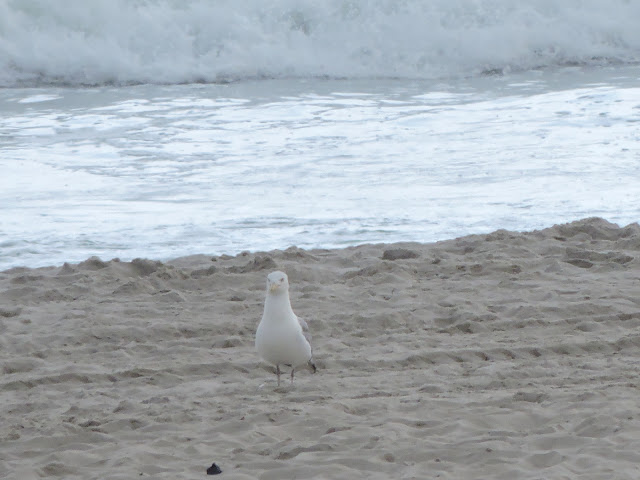 In a completely non-creepy sort of way, I love looking at houses lit up at night. Not in a creeper peeper sort of way, but in that don't-the-lights-look-pretty-in-the-dark sort of way. The lit up house is the one we were staying in, by the way (the left side with the two decks). So many beautiful (and insanely expensive houses) and so many with nobody staying in them. If they were mine I'd be there all summer long, working from a room with a view (isn't this why they invented things like Skype?). 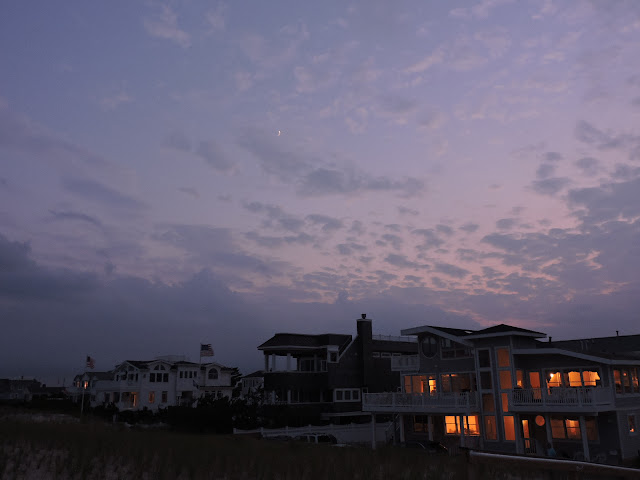 Both nephews were on this vacation and couldn't have been truer to age. Z-man was a typical fifteen year old--earbuds in, face in phone, emerging to swim, eat, and play mini golf. I think we said a dozen words to each other all week (actually, I said many more, but was met with the ubiquitous teenage eye roll at my silliness that was once met with equal vigor). A-train was very five years old. "Aunt Bee--get a picture of this beach butterfly!" 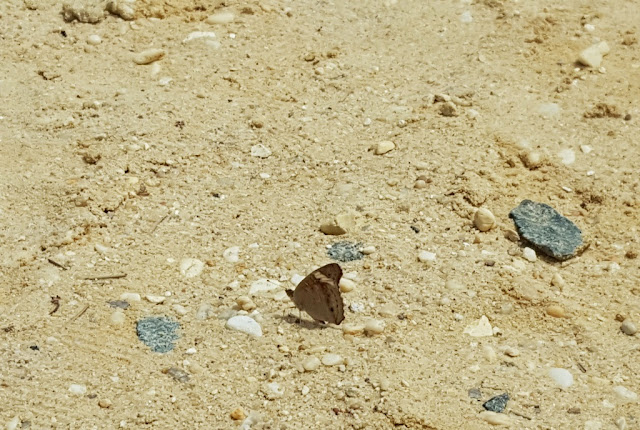 This kid woke up early ready to play, spent much of his beach time in the water, spent the rest of the day barely sitting still, and crashed into the delicious sleep only those with the unencumbered mind of youth experience. I don't know that I've ever heard of a kid that loves his family as deeply as this kid does. On the last day, I asked him for a hug, and he told me to wait a sec (as he had his pre-determined order of who got a hug when). I said "You probably are excited to get away from me; I get it" (because I know I'm annoying, haha), and he turned to me and said so sincerely "I don't want to be away from you." My heart. 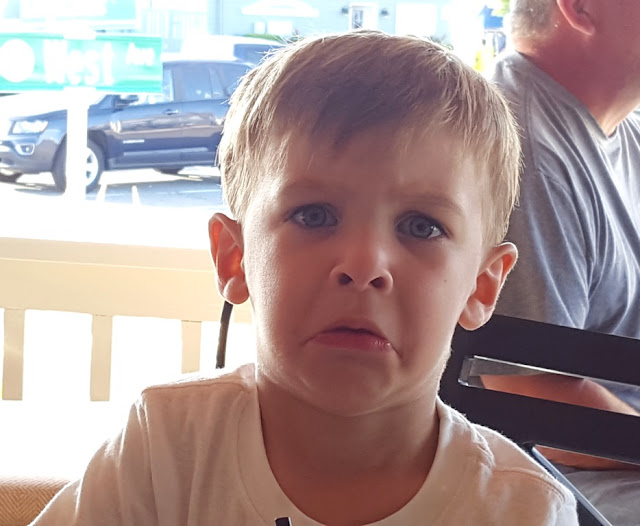 I don't know why, but this face cracks me the hell up. See the guy seated behind him? Not long after this was taken, he turned to that man and his wife out of nowhere and said "Excuse me, do you know the 'n' word?" We all sat there thinking (because we do NOT use that word that you think of when someone says 'n word') "Where in hell did he hear that??????" The lady said to him "Nice? Is the 'n' word nice?" and he said "No, the 'n' word is no. N-O." And turned right back around as we all breathed a sigh of relief and laughed.

The week went by all too quickly, and soon we were saying to each other "Do you believe we go home tomorrow?" And then "Do you believe this morning we were down the shore?" One thing that made it a little easier was the fact that it was windy and drizzly again-- 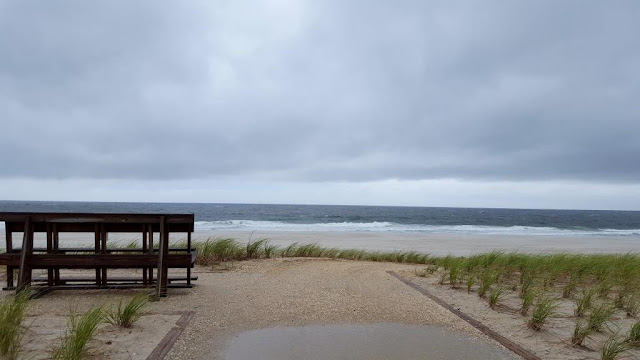 It figures that once you hit that vacation groove it's time to go back to reality. In dueling emotions on the matter, I could have used another week to truly relax, but at the same time I do love being in my bed, without sand in it, and not having to slather on goopy sunblock every day.
From the convoluted brain of Bethany at 10:09 PM