I have been thinking and thinking about how I want to write about this. It all seems so very much, but at the same time not much at all. Do I do this in one post so as not to bore people? Do I make it the longest blog post in history? Do I split it up? So I decided to just write a few posts about it, as while I write this blog for others to read I do enjoy going back and reading about trips or family events or cute little things the nephews used to say.

So, from the beginning. A few months ago, I ended a relationship I was in that, in lovely 20/20 hindsight, was not good for me at all. I felt restless and unhappy afterwards, and felt the need for...something to happen (but no idea what that needed to be). One morning, I was going through my emails when one caught my eye. It was for an Interweave Escapes trip to Woodstock, Vermont, to hang out with other knitters in a beautiful place, taking classes taught by Arne and Carlos (my Norwegian knitting boyfriends) and Lars Rains (Mr. Icelandic Sweater--he doesn't know I call him this). It hit that hollow spot in me, and I instantly knew this was the something I needed. It seemed a little  pricey, and I have a history of being quite impulsive, so I polled my advisors (my mom and sisters) and asked if I needed to go. They agreed it sounded like a trip designed specifically for me, so I signed up and spent the following weeks squealing intermittently and saying "I'm going to VerMONT to knit!"

Kids, it was amazing. We ate with the designers (all of the amazing meals were included in the package), made new friends (and some reconnected with old friends), learned some new techniques, and had a lot of laughs. By the end of the three days, I felt as though I had known some people for years and years. There was such a variety of ages, locations, and jobs represented (from retired teacher to wildlife biologist to NASA rocket scientist), yet we were all connected by that common thread that is our craft (we even had discussions on whether that should be categorized as a fine craft). We discussed gender views of knitting, how we all got started, the size of our stashes, and anything and everything else. I am almost entirely certain that I smiled from beginning to end.

I don't have many pictures from the workshops themselves (as every minute was used--and then some--on the topic at hand), but as I complete those projects I'll share them here.

So now that we're all caught up, want to take a stroll through town? 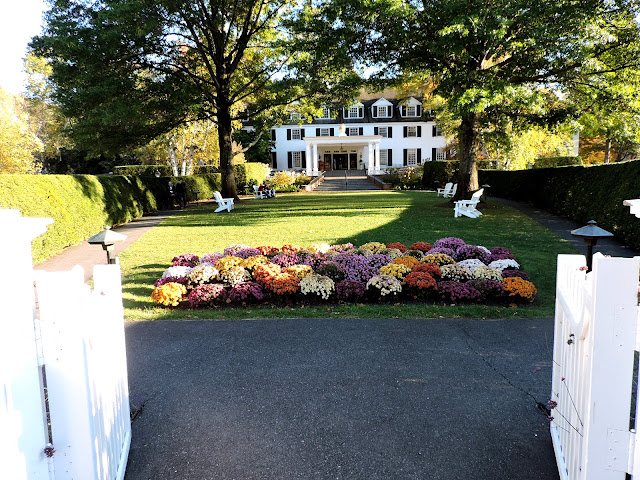 This is the beautiful Woodstock Inn and Resort, situated right on the village green (I don't know that I've ever been somewhere with a village green, so I must record that to remember that now I have been to such a place). 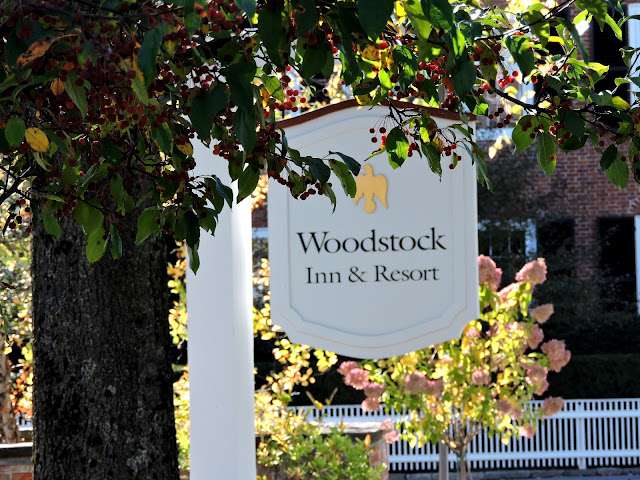 The town is not a large place by any means, but it's probably exactly what you'd think of if someone asked you what a Hallmark-designed New England town might look like. The weather was absolutely divine--vibrant blue skies, that fall smell in the air, and a bit of a nip that actually felt good when it hit your face upon stepping outside. 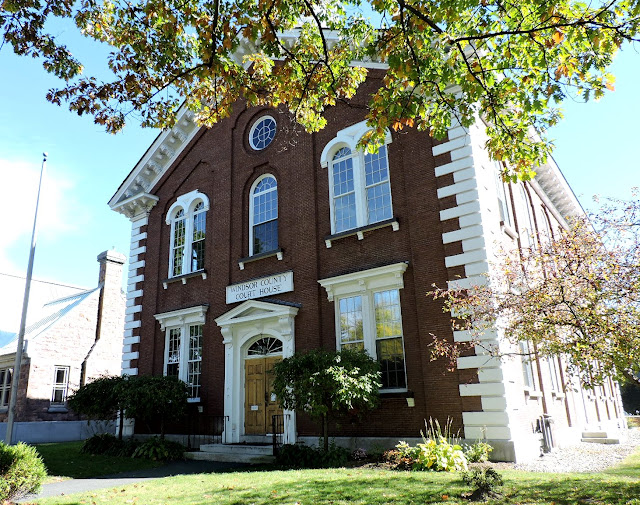 The court house was situated right next to the inn. I would not mind having jury duty if it was in such a building as this (unlike where you have to go here in Philadelphia where you leave feeling certain that part of your soul was sucked out of your body). 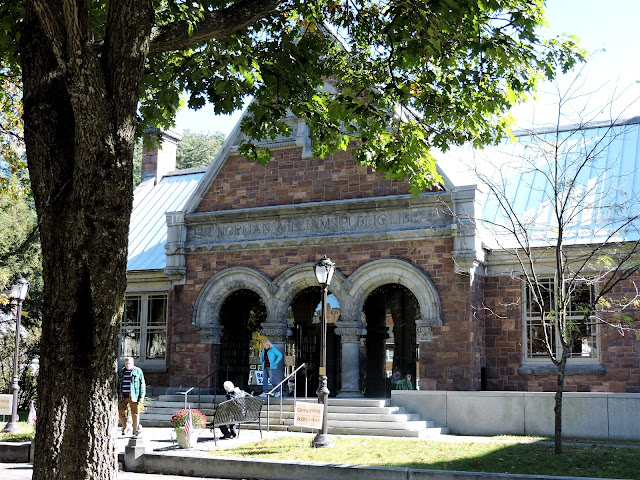 Every time I passed this place people were going in/coming out (it's the Norman Williams Public Library). 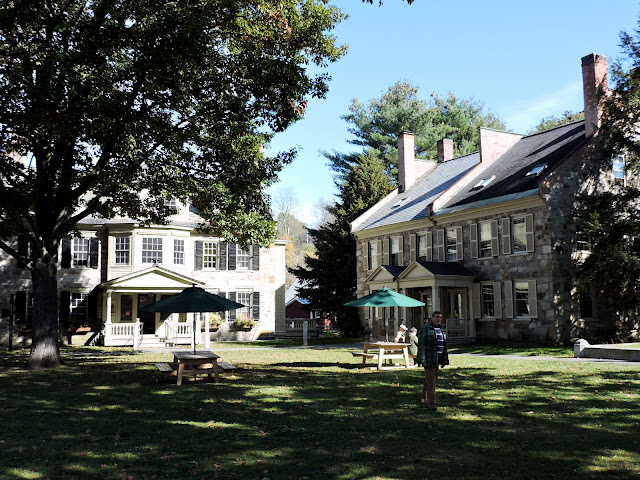 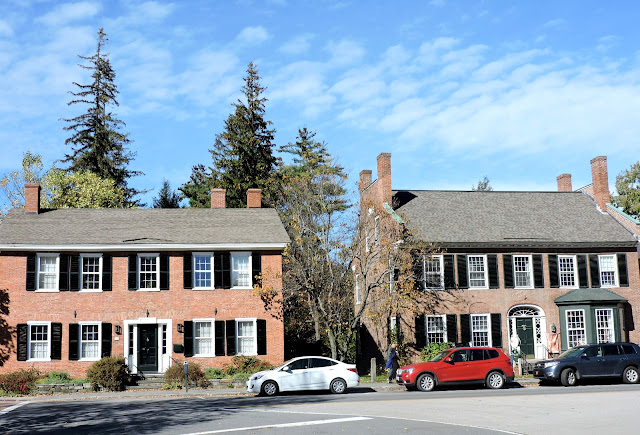 I imagine these houses on The Green cost the arms and legs of several people, as well as the promise of many first-borns. They remind me of the dollhouse I had when I was little. 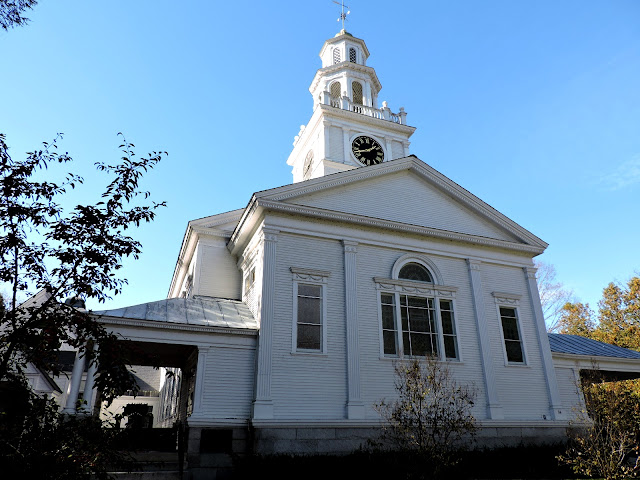 The small white Congregational Church, where Laurence Rockefeller (son of John, brother of Nelson) was married to his lovely wife Mary. 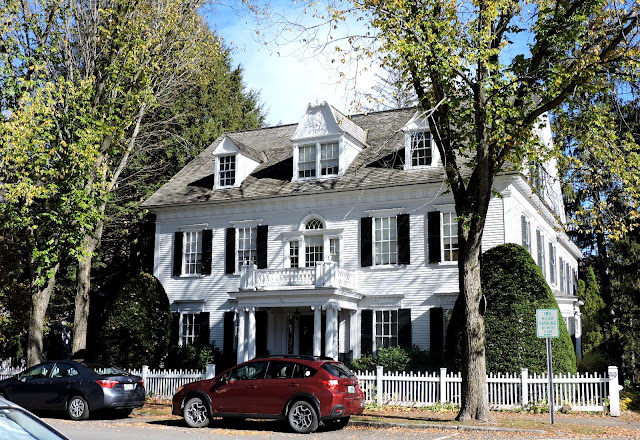 I don't know to whom this house belongs. It might be famous, it might not. I just wish it was mine. I feel like I can see myself in one of those upstairs bedrooms, with the window open on a summer afternoon, while I lay (lie?) sprawled on my bed reading Nancy Drew for the zillionth time. 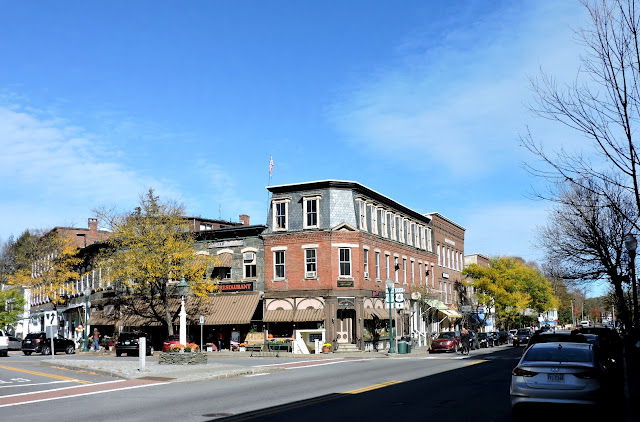 Soooo that's downtown. The thing that kept catching me off guard is that people actually stop for pedestrians in this town. And they're not impatient while they're doing it. At home sometimes it feels like you're literally playing a game of Frogger to cross the street. People barely slow down, and they certainly don't stop. 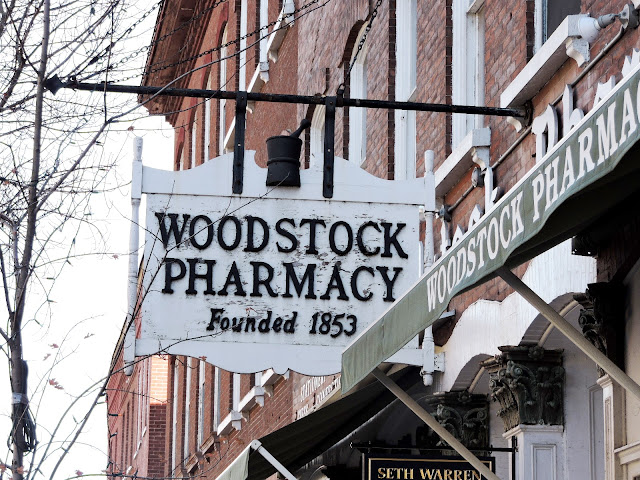 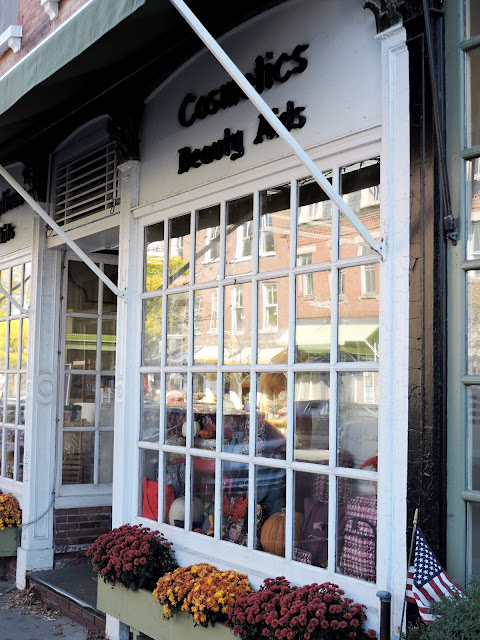 This pharmacy had a bit of a general store feel about. It reminds me of the Mayberry pharmacy from The Andy Griffith Show. 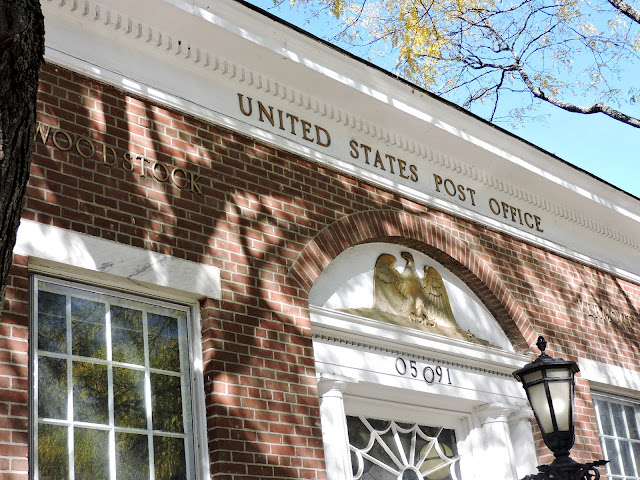 I don't know what it is, but I love small town post offices. They close branches in big cities, but these little buildings that once served as a big connection to the outside world are so endearing. 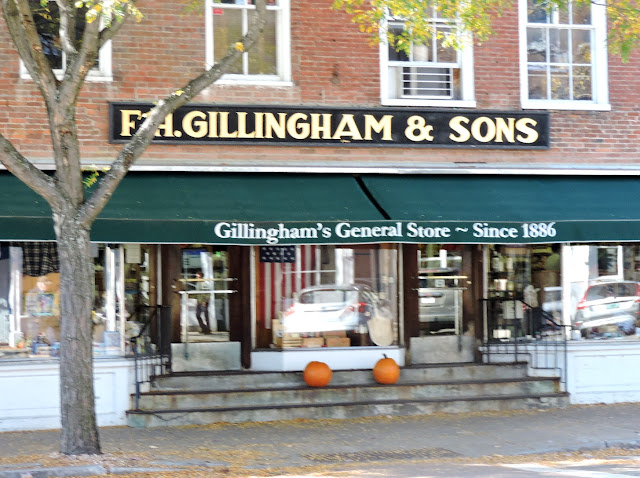 This old general store was a lot of fun to poke around in. They had a nice grocery section, as well as gifts, toys, and housewares. 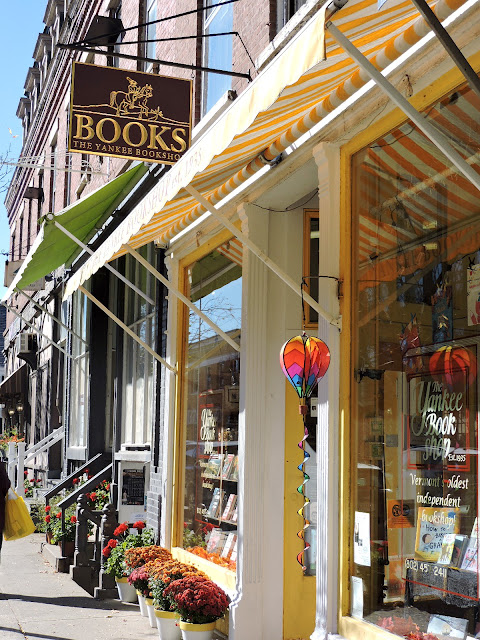 It is so rare anymore to see an indie bookshop--everything is online or a major national chain. I didn't think I needed any books right now, but I went in anyway, and found something by a local author about growing up on a Vermont farm that I neeeeded. 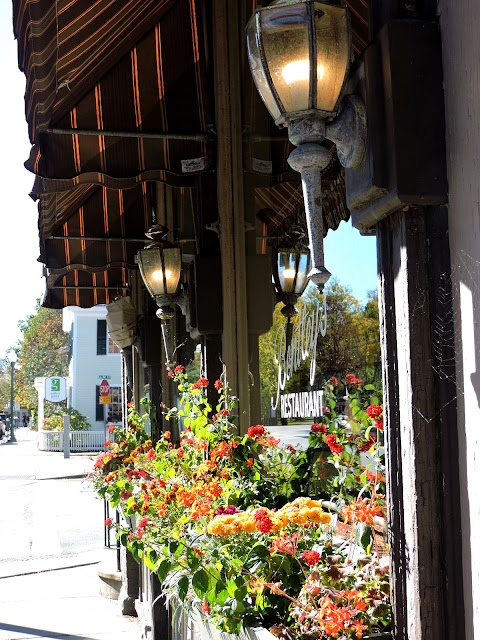 I had big plans to try and capture this shot at night, but due to a certain design duo at my table at dinner I completely forgot about it. That's OK, I'm sure it was pretty. 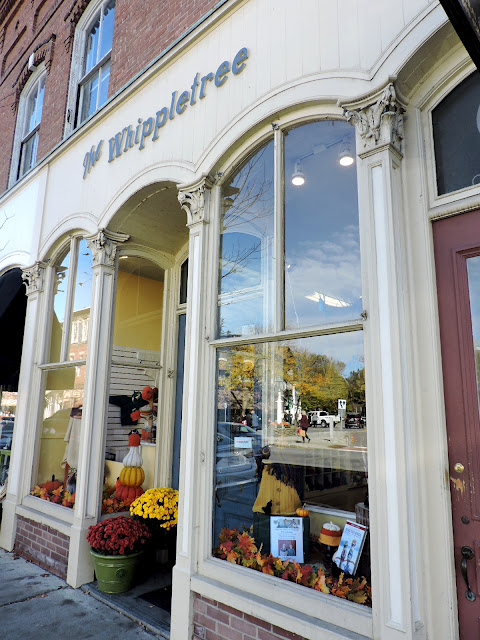 The Whippletree is the town's yarn shop. As attendees of the retreat we received a discount to the store. I was very well-behaved and did not overindulge. I needn't have indulged at all, as we received goody bags full of yarn, and there were yarn raffles each night, but it only felt right to buy some souvenir yarn. And a pattern. And a magazine. And a lotion bar (which I hear is an amazing thing). I'll be honest--I was a little underwhelmed by the yarn shop--not a lot of selection (but room for a lot more), and not the warmest employees either. The visit was actually a little off-putting, and I wasn't the only one. As we all shared stories around the fireplace (literally!) one of the common experiences was a touch of coldness in this shop. If I were a business owner I would be pleased that two dozen knitters high on inspiration were in town, but I guess not. Not that it means much from 350 miles away, but I wouldn't go back to this place (and no, I have no idea why on earth I gave them some of my money anyway).

That's enough for one day, eh? Next time we'll go to the farm.


From the convoluted brain of Bethany at 8:10 PM