Gnome is Where the Heart Is

It's not something I bring up in casual conversation, but...I love gnomes. Their little tummies, their pointy hats, their short stature that enables them to nap under flowers and toadstools. If left to my own devices, I'd be that crazy person with no visible lawn because the gnomes would be all over it. All. Over. It. A few months ago I saw a kit for crocheting a little gnome and some toadstools. Add to cart, complete purchase, boom. Then 'the event' happened, and the kit had to be patient. About two weeks ago, give or take, I decided it had waited long enough.

Now, truth be told, as I was hooking I was also thinking "Just what in the h-e-double am I going to do with a little crocheted gnome?" And so my brain went where it always goes--I either string it all together and make a garland of some sort, or I plonk it all on a wreath. Immediately a wreath image appeared in my brain, and I worked at a feverish pace towards that end. And last night, because I know how to party on a Saturday night, I put it all together. Wanna see? 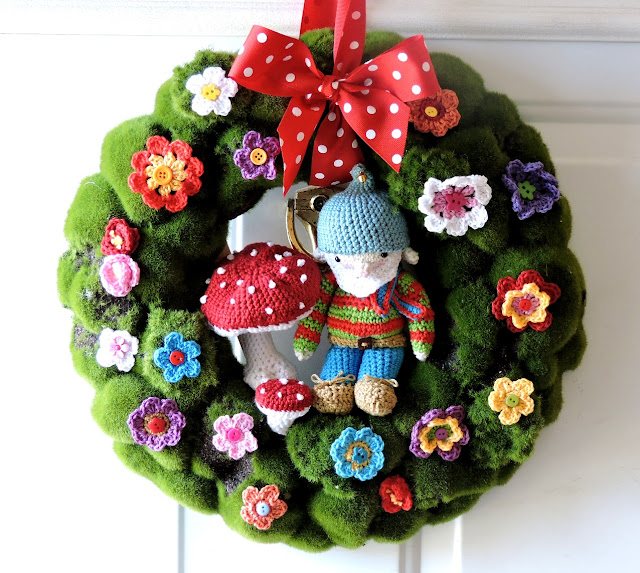 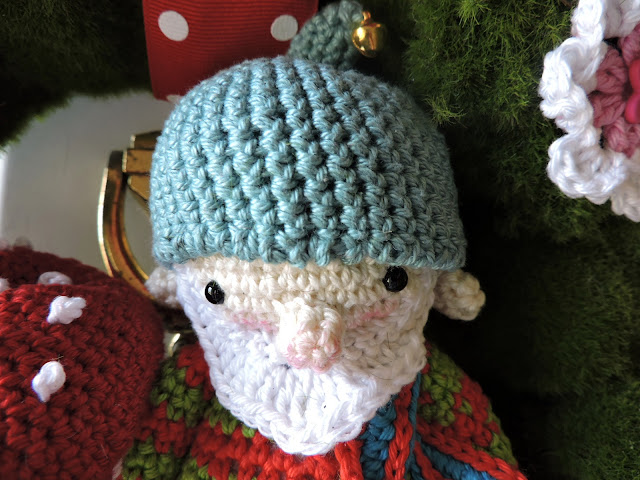 Look at his face with his button noise and pink cheeks (and eyes that I swear are on straight). 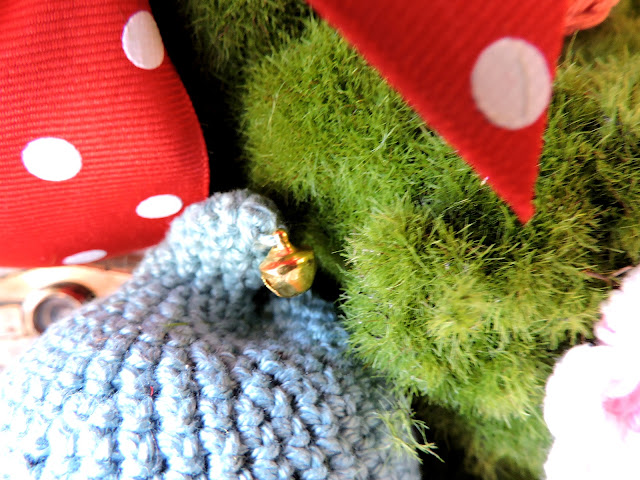 And his little jingle bell on his hat! I think that might be my favorite detail of the whole shebang. 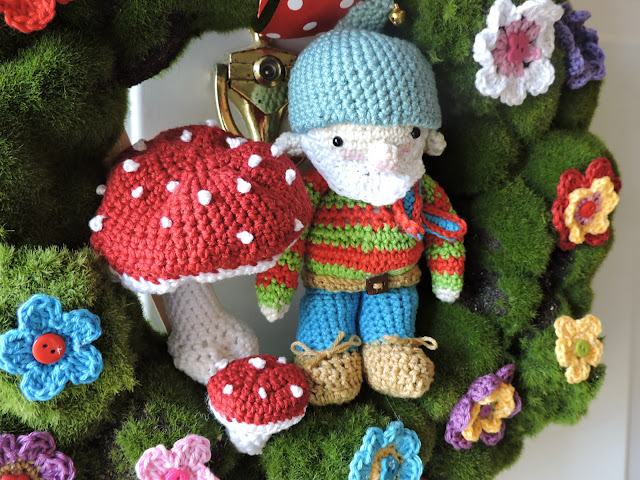 The kit was from Little Box of Crochet and came with the perfect amount of yarn and everything else needed to make this little guy (including the stuffing and a hook), There were a lot of little pieces to stitch up separately and assemble, so this was not as quick as it looked like it should be.

I found the wreath at Joann's. I was trying to think of how I was going to get a mossy look; I had a styrofoam wreath and a bag of moss in my hand when I saw this one. All mossy and bumpy and straight out of a little fairy tale thicket. It even came complete with little patches of dirt. 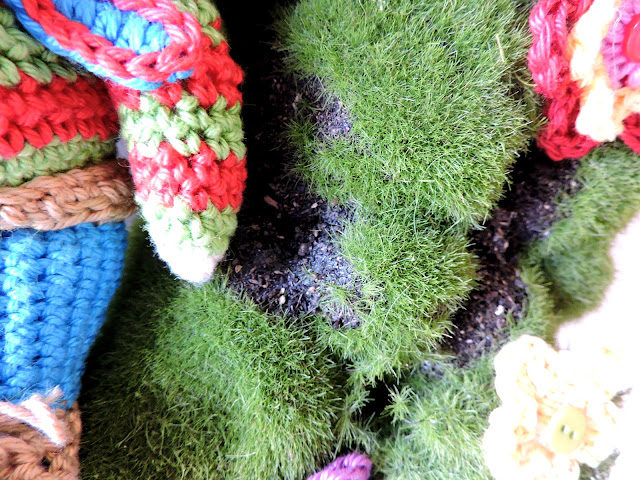 After finishing the gnome and toadstools (and mastering French knots) I whipped up some little flowers. I had a kit I bought last year and never used because I would never use the project (mug cozies), but the yarn was in vibrant, pretty colors and just right for this. I dug through my button jar for just the right touch for the flowers that needed a center. 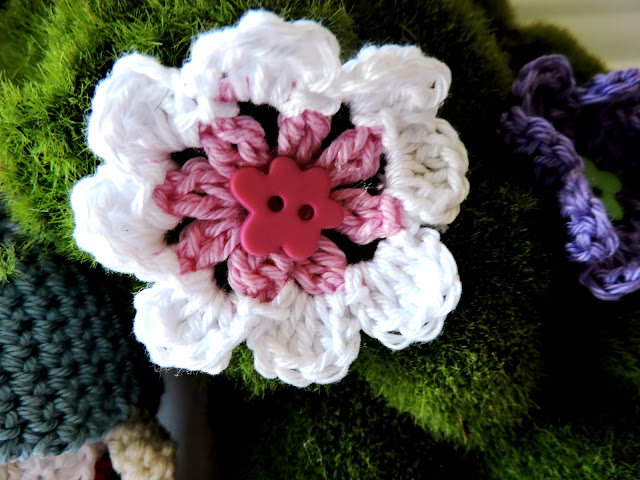 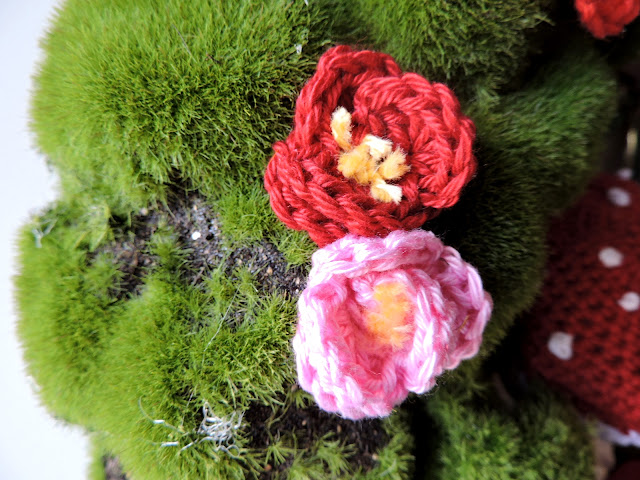 To assemble, I fussed with the flowers until I liked how they looked, and hot glued them in place. The toadstools and the gnome were a bit harder. I didn't want to glue those in place as if the wreath starts to look worse for wear I don't mind losing a few flowers to the trash. BUT there's no way I'd be okay tossing the gnome and the toadstools. So I rigged up a little system only visible from the back. 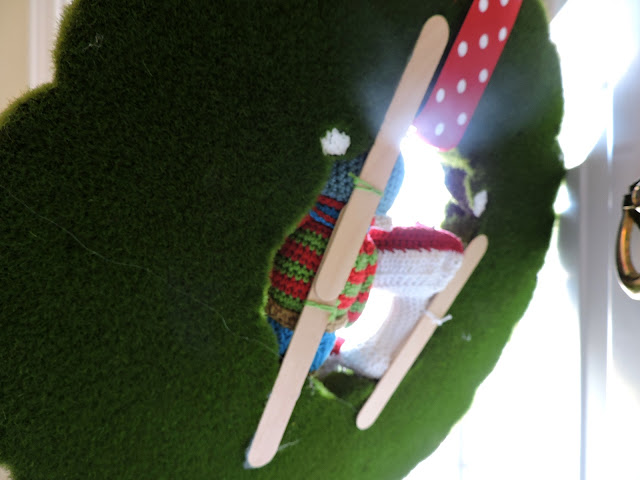 I tied them to tongue depressors, and then glued those to the back of the wreath. You can't see them at all (those white splotches are where I had to remove them the first time because I just went for it instead of doing the logical thing and checking their placement), and if need be I can untie them with no issue. 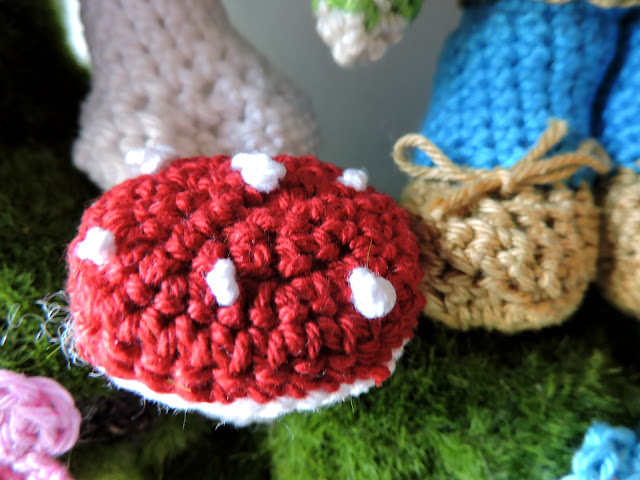 OK wait, my favorite detail might be the little yarn shoelaces.

And if you're wondering....his name is Zeke. Short for Ezekiel. Ezekiel Walter Dominelli. What, a gnome can't be Italian?*

*OK, historically speaking in a cultural sense... probably not.
From the convoluted brain of Bethany at 10:20 PM