For the third year in a row, the Christmas Village has come to Philadelphia. Based on the Christmas markets found in Germany for centuries, a collection of wooden huts has been erected around Dilworth Plaza in front of City Hall. Vendors from around the world sell their wares from Thanksgiving through Christmas Eve. There are German Christmas pyramids, Matryoshka dolls, Stollen, Lebkuchen, and more. Elves, wursts, paintings and photographs, and it goes on and on. 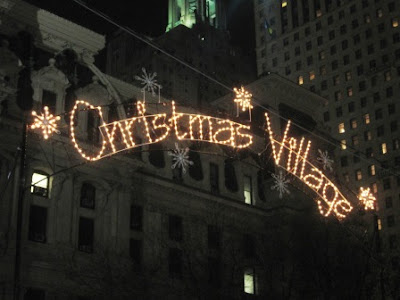 For a bit of a Christmas outing this year, we decided to trek on down to see this, and then have a nice big family Christmas dinner. We hopped on a train (I've never taken the train before--crazy, eh?) and went downtown. Our station was right outside the Market so we didn't have to go far. It had just turned dark right before we arrived, so the lighted huts were a cozy welcoming sight (it wasn't terrifically cold, so we could stroll in relative comfort): 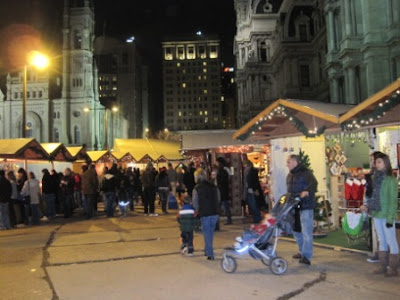 There was quite a crowd (this is one of the more open areas)--in some sections you had to force your way through.
The first hut we came upon was my favorite: 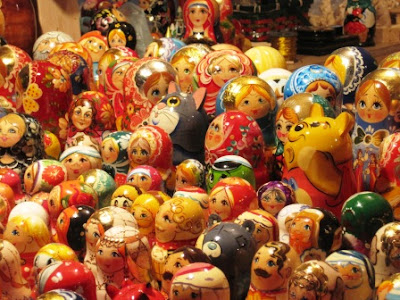 Nesting dolls! In every shape, color, size, theme, whatever. I super wanted all of them.
Right next to this hut was that of a few Ukrainian ladies who had pegs and pegs of hand-painted Christmas ornaments: 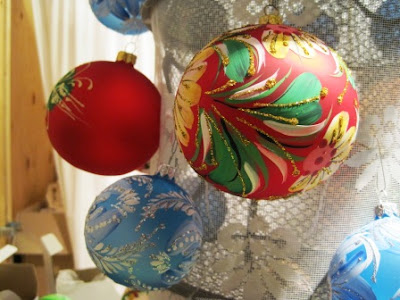 This is a wee fraction of their wares--some of these were so achingly beautiful (with achingly huge prices).
And then we happened upon my second favorite hut: 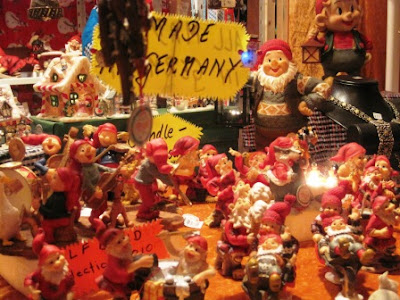 I have a soft spot for the German elf (or gnomes, as they appear to be--there's probably a difference).
There were huts of Peruvian knitted hats, Nicaraguan scarves, personalizable Christmas ornaments, felted flower bouquets, handmade soaps, gourmet pet treats, and so much I can't remember right now. There were many more things I would love to show you, but in certain sections it was so congested that if you paused longer than necessary you risked harsh words being thrown at you (at least that's how it felt).


We made our way around, and then headed on to one more thing--the Wanamaker Light Show (technically it's Macy's now, but I'm a nostalgic person and I insist on the original name in this case). I didn't have a good photo vantage point (though fine for viewing)--this is what it looks like at the very end of the show when everything is lit up: 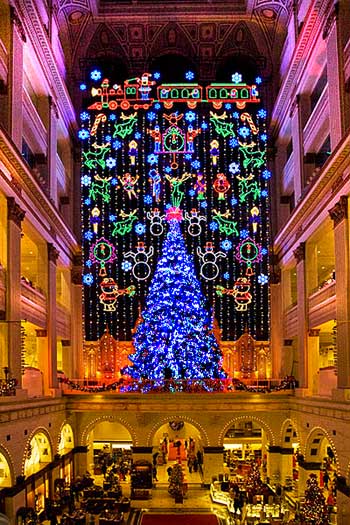 Photo from here.
The light show has been in operation since the fifties. We went to this show when I was little, and I had zero appreciation for it then. There was something about seeing it as an adult, and knowing that it must have been an amazing feat when it was new that made me truly enjoy it. Knowing what we can do with technology today made this simple light-show all the more endearing in its simplicity. You can see a bit of it (with no justice done, of course) here on YouTube. You can read more about it here and here.
There is also a Dickens Village, but when we got up to the third floor the line was like that scene in "A Christmas Story" where it winds its way through every department before coming to an end miles away. There was a collective "No flippin' way!" and so we made our way to the restaurant and filled our tummies with gooey cheeses and yummy pastas.
Of course I must show you what I bought: 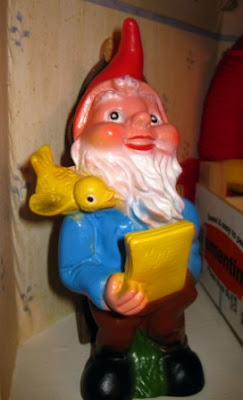 I loved it, so I had to get one that I could leave out all year :)

A pickle ornament!
The old German tradition is to hide a pickle somewhere on the Christmas tree (I'm guessing a pickle was chosen as it would seem to blend easily). When directed, the children would look all over, hoping to be the first to find it. The child who did so received a prize (in some families money, in others perhaps a small toy). We have never had one of these before, so I bought our first original, German, hand-blown glass pickle.
And that, said Bethany, is that (because isn't that enough for one post?)
Happy Monday, folks!
From the convoluted brain of Bethany at 10:24 PM