'Allo! I've spent some quality time with Harriet (my sewing machine) this week. When I find myself not very motivated to sew (but have projects 'due') I find that two things help: first, I just start. Half of my problem is usually getting going, so once I do that it's easy to keep going (I don't like leaving things unfinished). Second, I work in small bits instead of marathon sewing. Small, reasonable goals are much more achievable towards the same end as an unrealistic night or two of super late night sewing.

Last year, I posted about my troubles with making a cute, workable wristlet for a friend's daughter. She beat the crap out of that thing all year long (which I love to hear--it means it got used :) However, as I had never made the pattern before I didn't realize how thin it was, which limited how much could be carried. As such, if it's just holding a few cards or bills it's fine, but anything more and the zipper pops. This year, though, I had my own new wristlet I had just made to base a new one on. It's what I was hoping to end up with last year, but had no clue how to go about it. I did some drawing and some math, and delivered this one today. 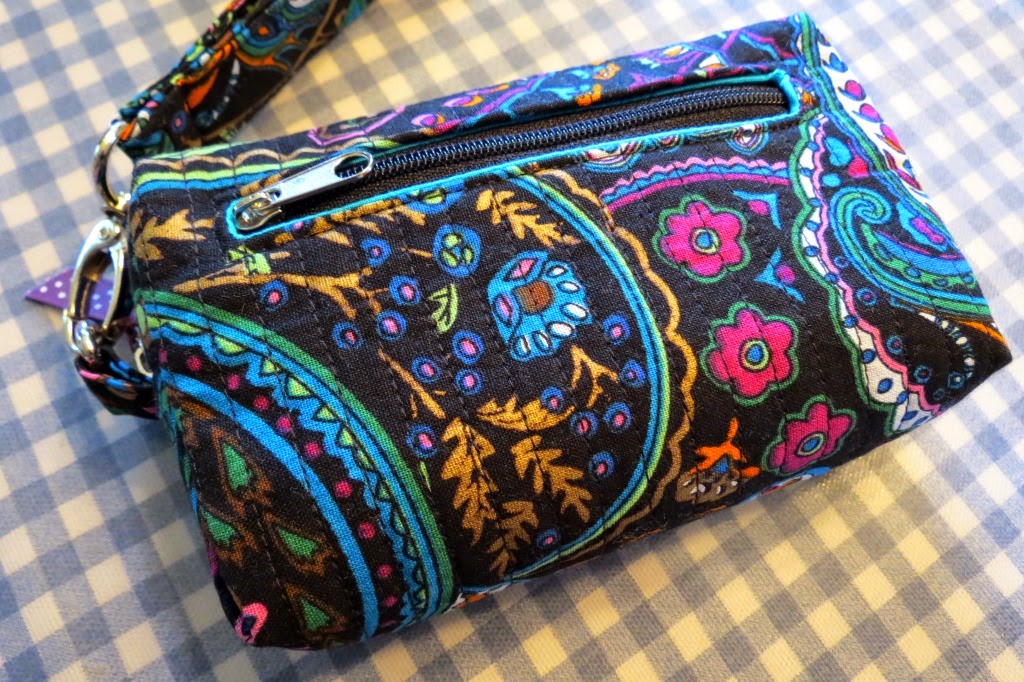 I used the same exact fabric (as I just couldn't find the right kind of elephant fabric), and I think it really has a Vera Bradley-ish look to it. I quilted with simple straight lines in one direction that you can barely see. And let me just tell you that I have no idea what is up with that fabric--it looks faded, but the colors are really rich and vibrant in actuality. 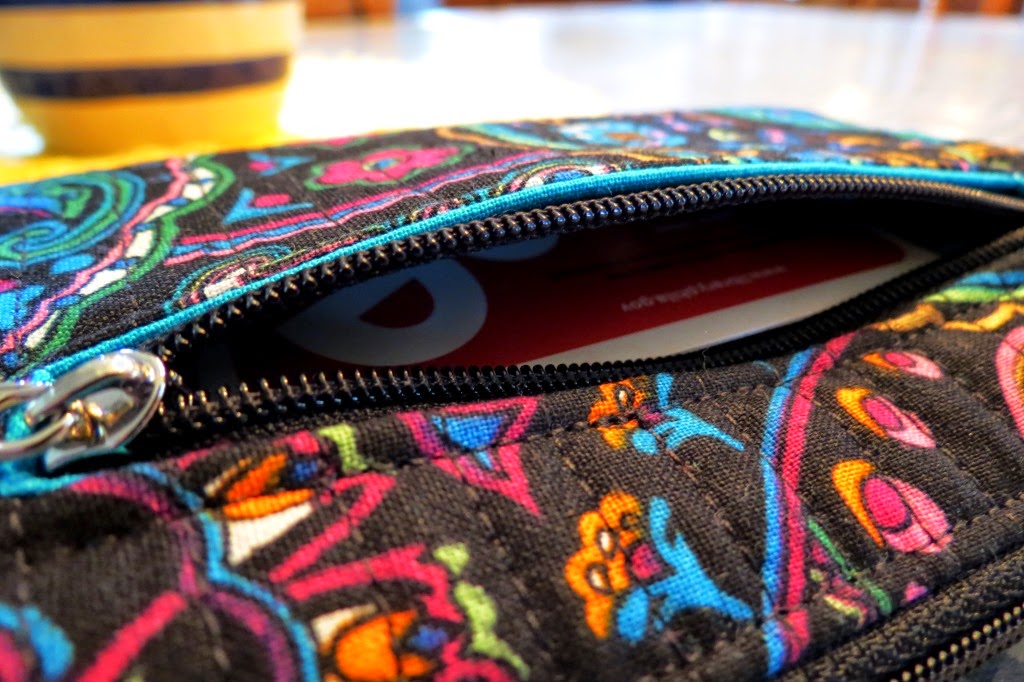 Figuring out that teeny flush zipper was not fun. The process was the same as usual, but I had to be really mindful of the side edges (and I'm not used to doing that as I usually insert these into larger bags with plenty of room). I confused myself a few times and thought I really messed it up, but it is the perfect size for holding a standard-sized card, which is what I was shooting for, so yay! Seriously, what is with that fabric looking so faded? It's really not. Swearsies. 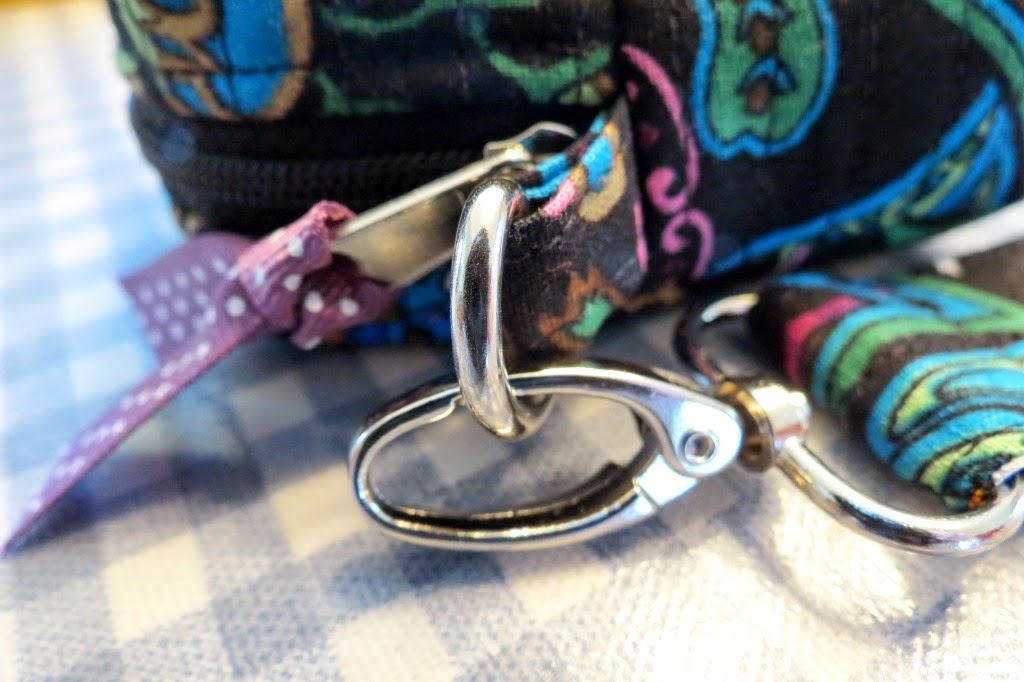 Normally I would have gone with bronze hardware to match the fabric, but I didn't have matching anything. Good thing silver seems to go with everything. I have no idea why but I have oodles of these clips that I don't remember buying, and looking at this picture makes me think of a leash, so maybe I'll make some of those.... 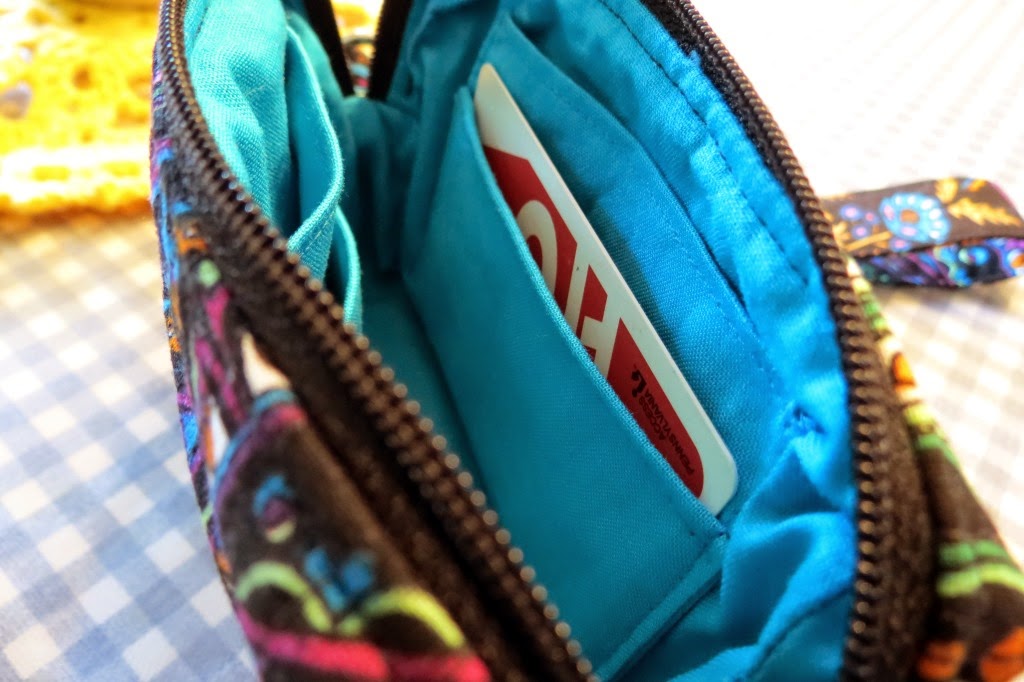 I put two card pockets on the inside (my expired library card that I still have for some reason is getting quite the workout as a model). This leaves a nice chunk of room for a phone, cash, some lip gloss, and phone numbers of cute boys, harharhar. 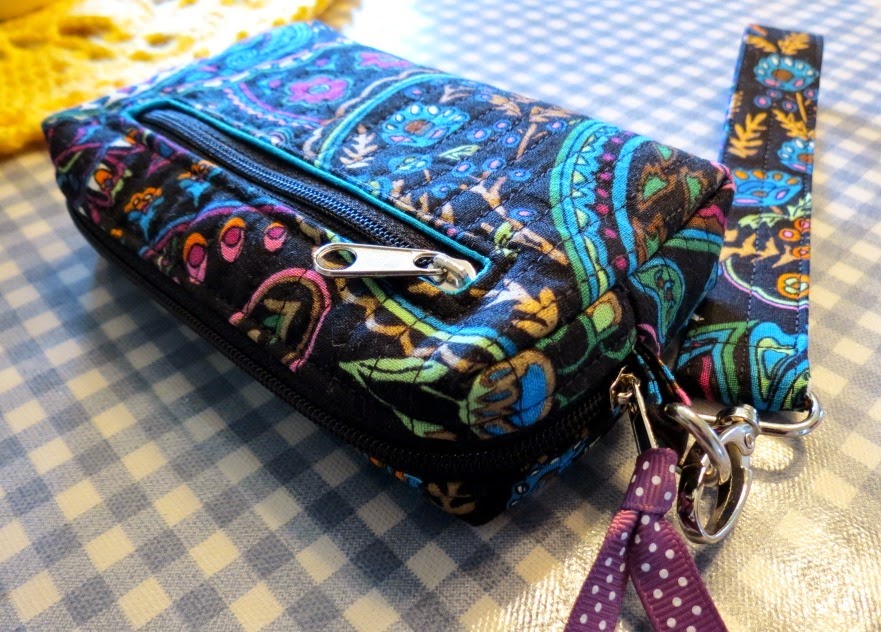 This ended up as such a good size, and I used a bit more interfacing than I did on mine so it feels more structured. I was giddy with joy when I found some woven black interfacing I don't remember buying, and I had some black fusible fleece as well. I don't know if that makes a difference on such a small thing, but I felt I had to use them or else all that glee would go to waste. It's actually a little smaller than mine, but has more depth. I don't know how I manage to use the same measurements for two things and they end up different, but that could be the story of my creative life. Which is good, I guess--it guarantees that no two things are alike as I'm clearly incapable of making them so (but in a good way).

I've got an overnight bag that's half-finished sitting on my sewing table that needs a lining inserted, so I'm hoping I'll have that to share soon. I've got bathroom curtains to make, my quilt to work on, and yarn for two sweaters on the way (whaaatt??? I know, I'm going to try to make clothes! Clothes that aren't pajamas!!). I certainly never lack for things to do. For that I am thankful.

See you soon, lovelies!
From the convoluted brain of Bethany at 10:24 PM