I have a confession to make. I have a fear of gussets. Not every kind of gusset...but the kind where it attaches to a zipper and forms a big loop, and then you attach it to the front/back pieces? I get a little wiggly when faced with those, so I try and do what I can to avoid having to do that (which is why I make my boxy pouches like I do, but that also keeps me from getting that cute curved edge at the top). My main issue is getting the fit just perfect, which, in hindsight of making this bag, is kind of silly on my part as the adjustments (if necessary) are easy. 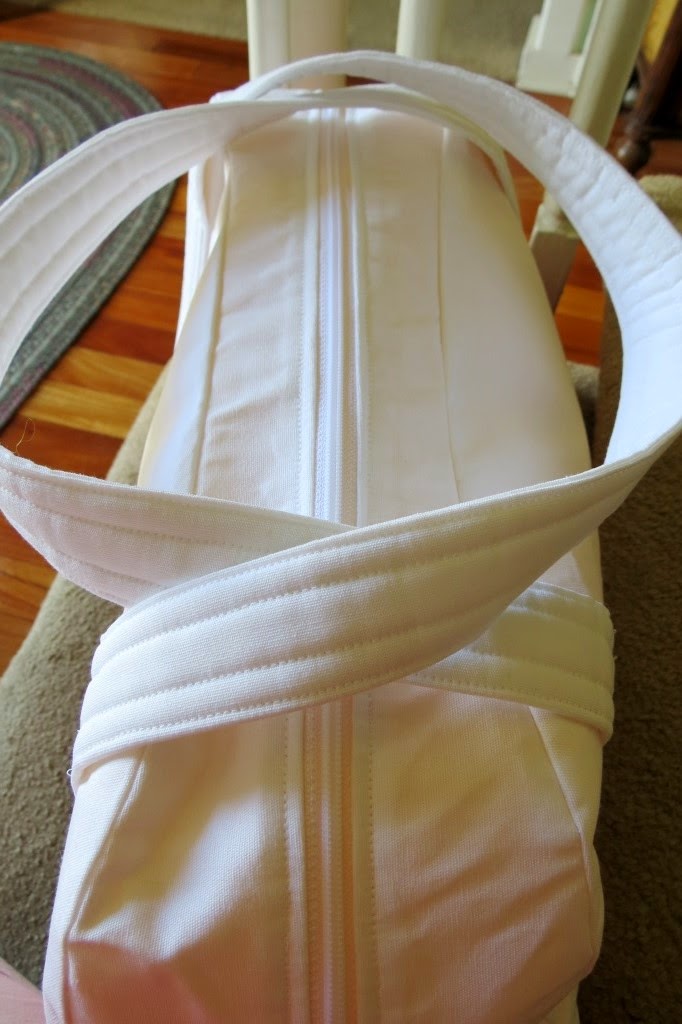 Anyway, a few weeks ago my sister asked me to make a bag to donate to a fundraiser one of her friends is having. I never turn down those kinds of requests, and she had an idea of what she wanted so it was just narrowing down the options. She had in mind some kind of overnighter/weekender, that wasn't a duffel and wasn't a glorified tote. I came across this link on my bags page on Pinterest, and sent it to her. She loved it. I told her we'd go look at fabrics, and she said "Ummm...I kind of want it exactly like that." 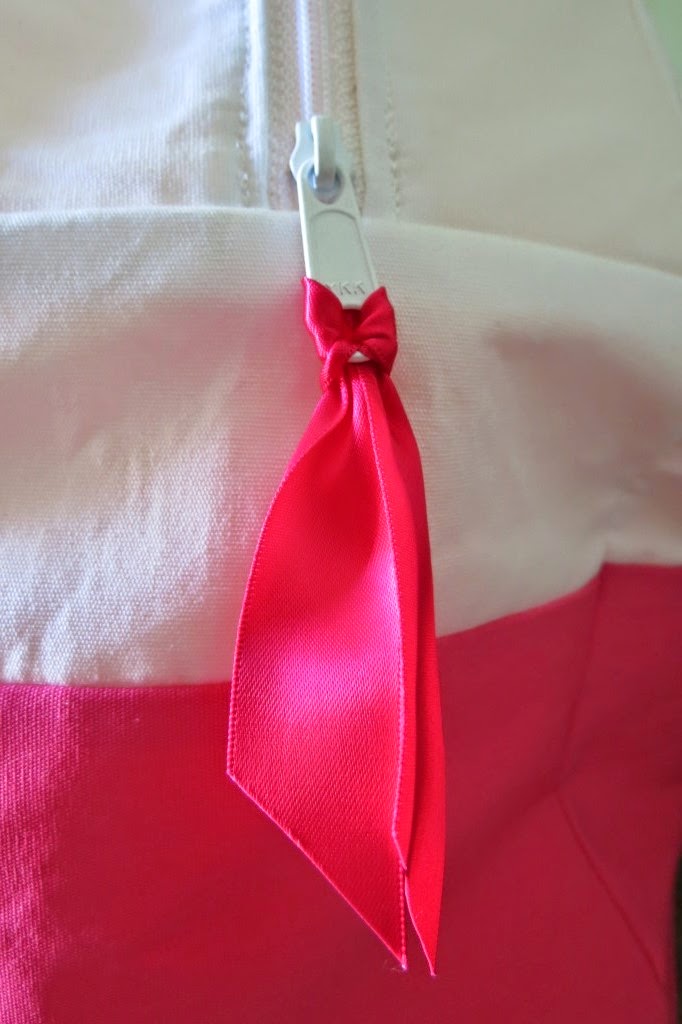 I emailed Vanessa at LBG Studio who made the pinned version of this bag by Gingercake Patterns to ask if she used any interfacings, and found out she used duck and denim, and that's it. After spending a long time trying to decide on a duck without much luck, we went to the bottomweights section, and hit the jackpot as far as colors go. We found all three colors in the same fabric and same weight, which was lighter than duck, so I did add some medium-weight interfacing for a little more stiffness. 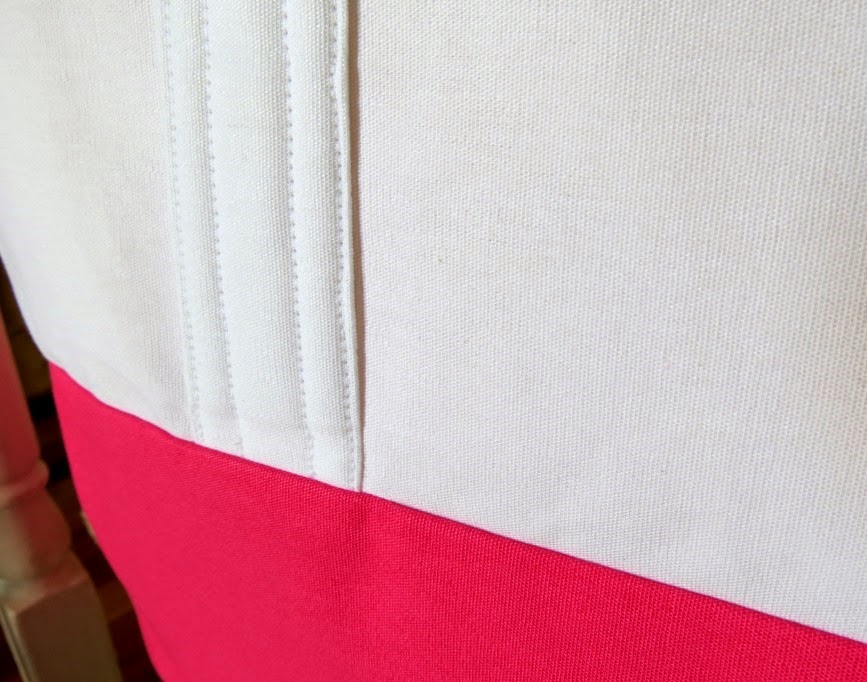 I pretty much made the exact same bag, so there is certainly no creativity or originality on my part whatsoever. As the pattern had to be modified to get this look, I did have to do some thinking and adjusting but nothing difficult. Things got a little squidgy when I was putting on the gusset, but not too terrible. I did use some fleece in the handles and they feel nice and sturdy. 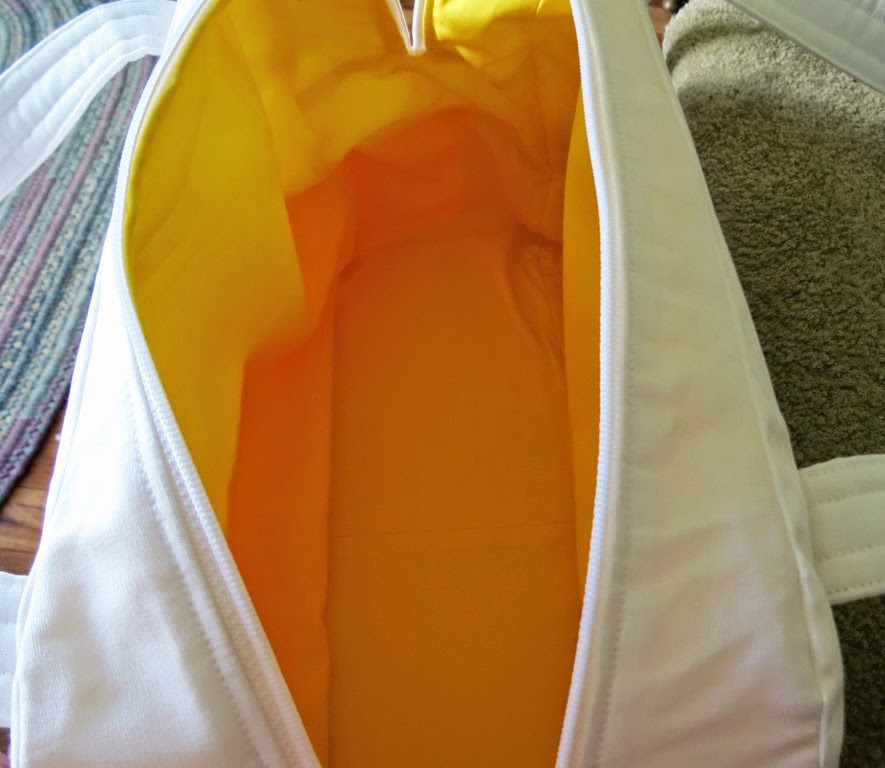 The inside is a great cheery yellow. I had one issue with the lining, if you can call it that... I literally had this bag finished and was doing the final press, when things didn't seem right. I couldn't figure out what was going on, and then I realized that the front piece (or back piece) was on upside down. So I had to get acquainted with my seam ripper and fix things up a bit. It didn't take long, and I felt really dumb, but silly mistakes keep you from patting yourself on the back too hard. I did add some interfacing to the lining, but only because the yellow showed through the white and was not looking good. The interfacing removes that effect, but keeps that nice pop of sunshine inside. 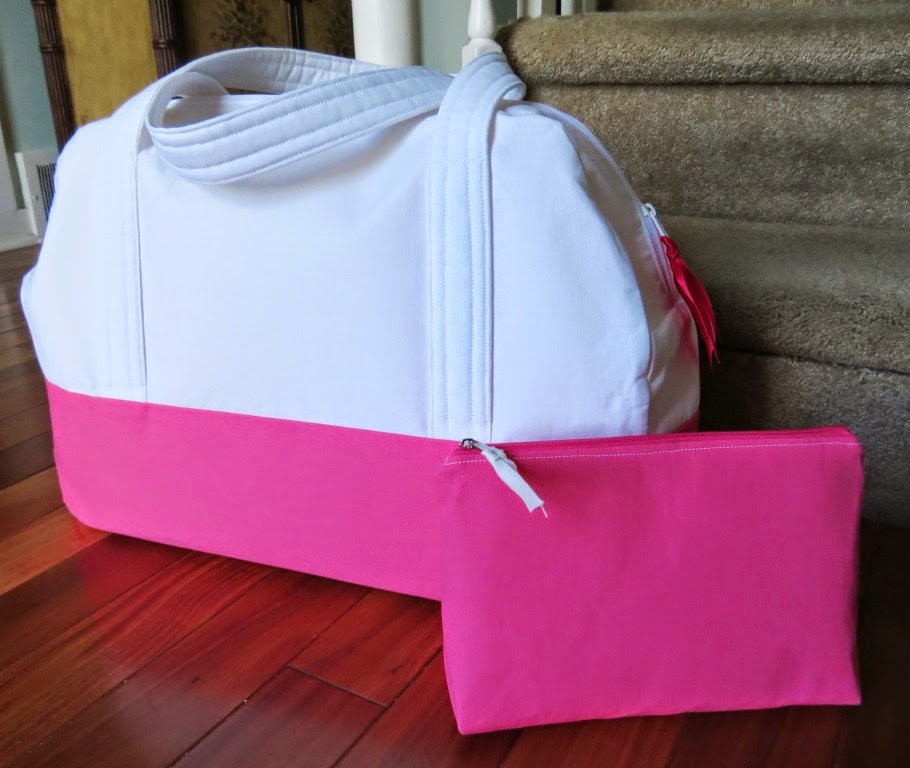 And there it is. I love it big time. This is the larger size of the two in the pattern. As I had a little bit of pink left over I made a flat-bottomed zip pouch (tutorial here) with another fun yellow for the lining: 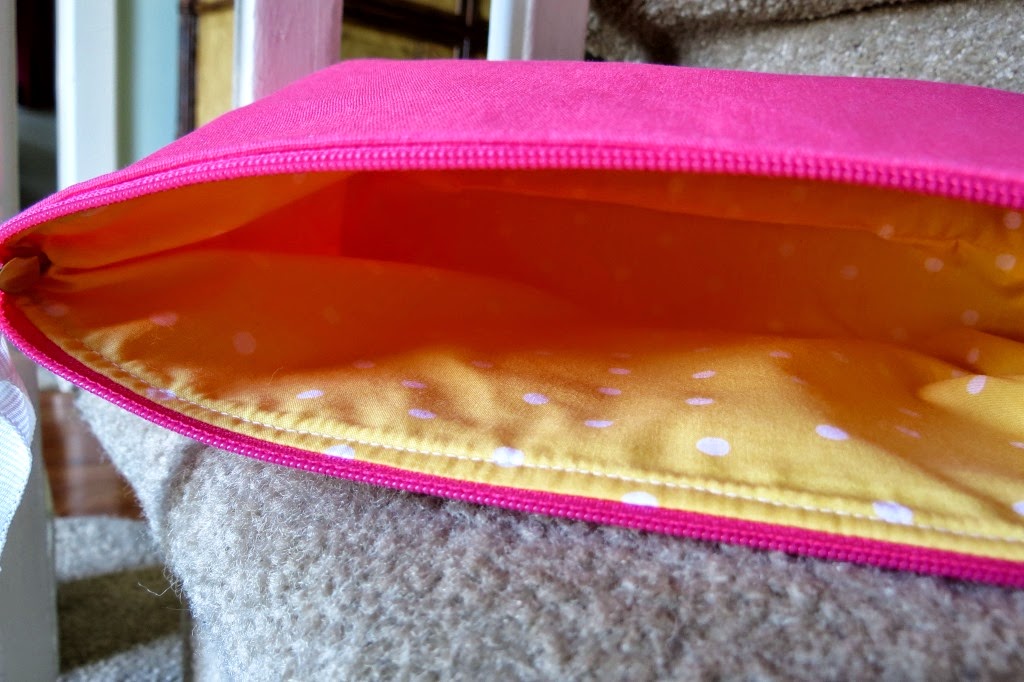 The fabric requirements for this one were pretty dead on, and the instructions were well written. I haven't sewn bags from a pattern for a long time (until recently), and I find that I like not thinking too much sometimes. 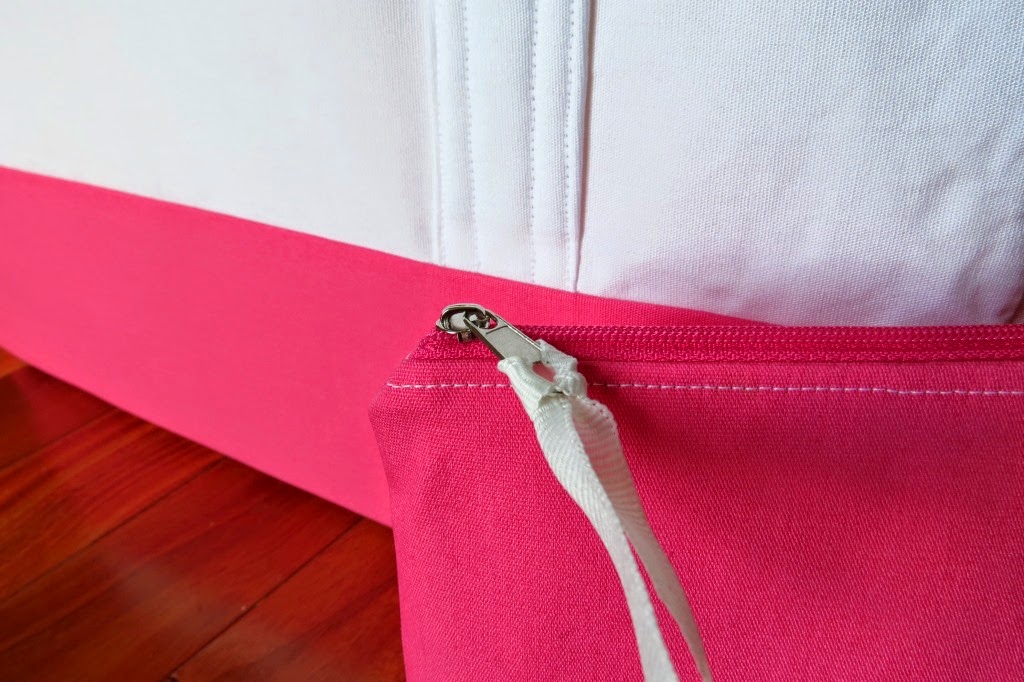 And hey--save those ribbons that come tied to everything. I bought a cute little ice pack on clearance at Joann's the other day (mostly out of nostalgia for schoolyard bumps and bruises but also because it'll come in handy around here with nephews and such) and it came with a bright pink ribbon tied around it. My mom bought washcloths or something recently, which also came tied in a ribbon. Those ribbons are excellent for cutting into zipper pulls or reusing as an actual bow. I used to toss those with no thought to reuse, but they came in handy for these zippers as I had nothing on hand that matched just right.

There is only one thing I would change with this pattern. The part that attaches to the zipper is curved (you can see this in the top pic). I would eliminate that and make it a consistent width for the whole length of it. It'd be a little wider at the top but wouldn't affect that cute curve across the top corners. And I do like the handles coming up the sides instead of out of the top seam but that's just personal preference...but one I'd probably try to work into other versions. 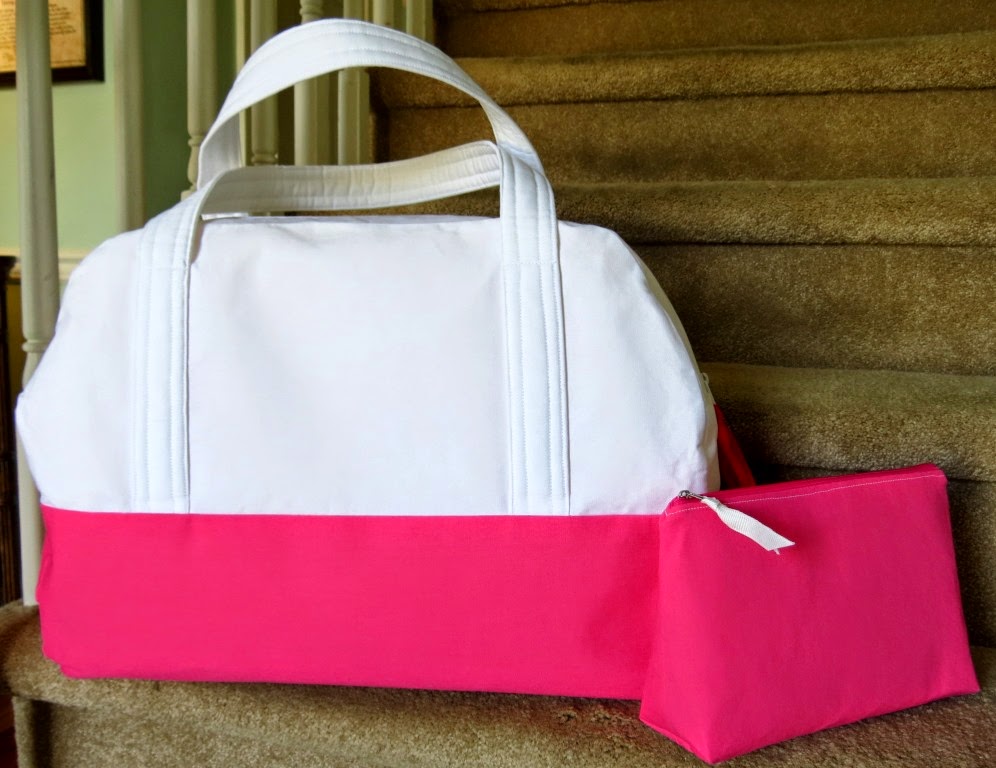 I'm thinking of making another one...maybe black and white with some hot pink piping? I'm pretty sure more of these are in my future anyway, as my sister doesn't want to give this one up.

Happy Monday!
From the convoluted brain of Bethany at 10:44 PM