A Day in the Park

Ahoy, ahoy! As I mentioned at the end of this post, this week is Restaurant Week in Center City, Philadelphia. As my parents' anniversary is coming up, my siblings thought this would be a great opportunity to go to a restaurant that would normally be a little too pricey as well as spend some time downtown (I didn't even know it was Restaurant Week so I just nodded and agreed). After a sweltering Saturday, Sunday was warm and mostly clear and sunny. Unbeknownst to me, but beknownst (that's not a word but it should be--if something can be un-something it logically follows that it has to be something too, right?) to Alicia, there have been these pop-up parks showing up around the city throughout the summer. It sounded fun, so we went to the Spruce Street Harbor Park down by the river for the afternoon.

I took a lot of pictures, and could have taken more, but I already felt like a tourist in my own city so I restrained myself. As we walked in, there were brightly woven hammocks, and tables and chairs of every color you can imagine, in case you needed to take a load off. There were light sticks hanging in the trees (which didn't show great in the pictures as it was a sunny day but would have been awesome at night), and things for little kids to do (giant legos, giant chess pieces which were more fun to move in any fashion than in a chess-like fashion apparently, cornhole, and so on). There was also ping-pong, bocce, shuffleboard, and I feel like there was something else I can't remember.... On Saturdays there are arts and crafts sellers, but not on Sundays (which I was a little bummed about). If you felt like doing nothing the view over the river was beautiful. 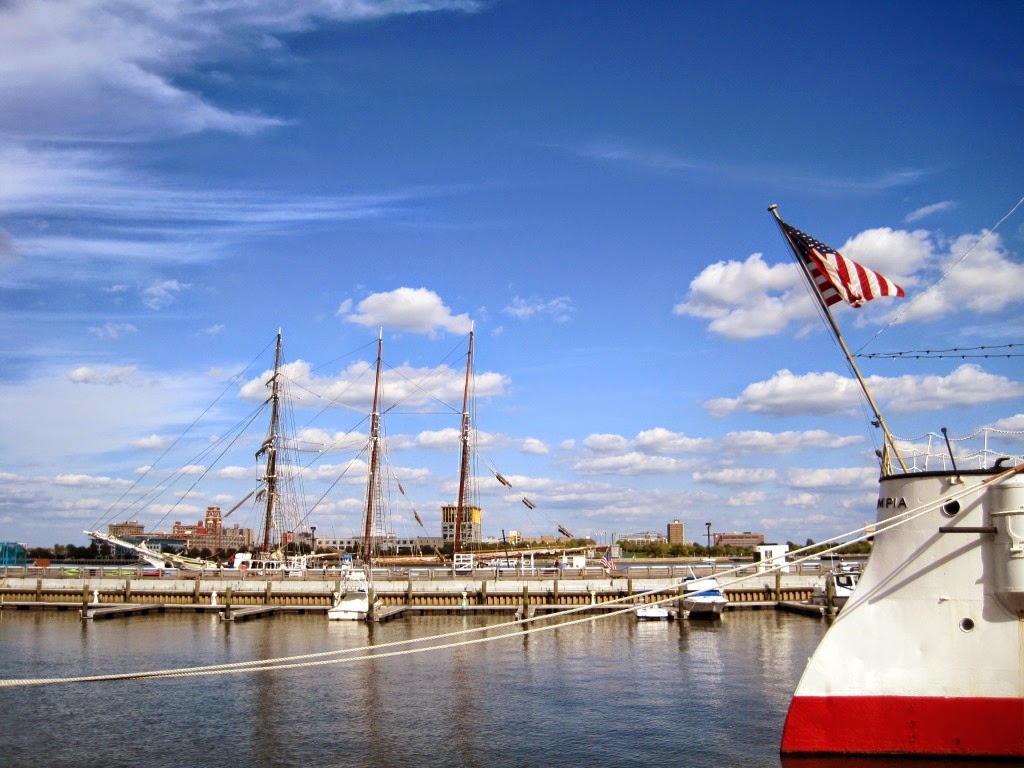 The only bad part is that it's New Jersey you're looking at there. Hahahaha, I'm kidding (not really kidding). 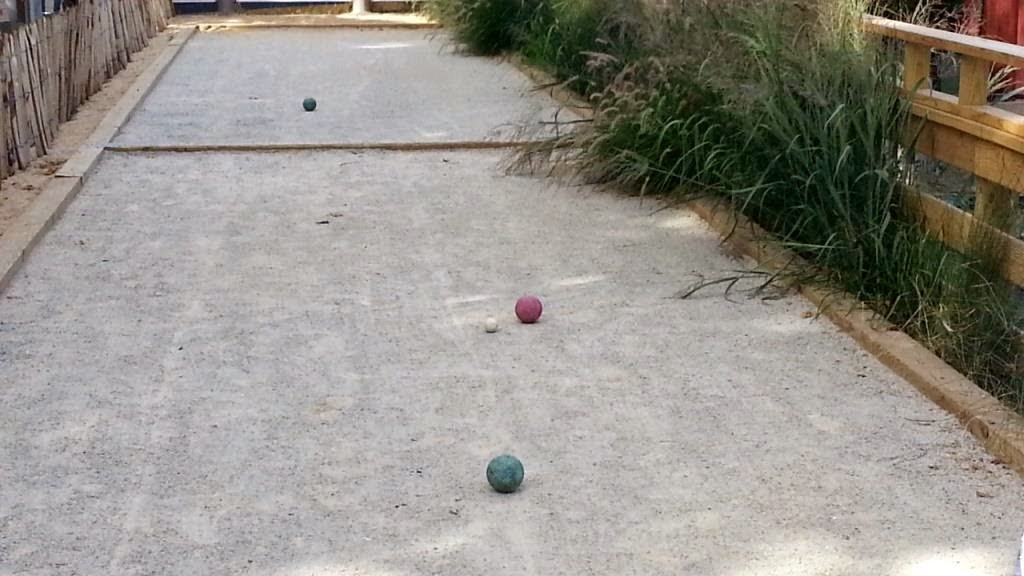 For those unfamiliar with the game of bocce, you throw a small ball (see the white one?) and then each team has larger balls that they toss to try and get close to it. Each ball closer than the other team's is worth a point. I'm sharing this picture just so you can see that the red ball really close to the little one is mine :)  In the interest of full disclosure I have to tell you my brother knocked it far away with his shot (which was happening literally as I snapped this photo, but I have the picture for proof). 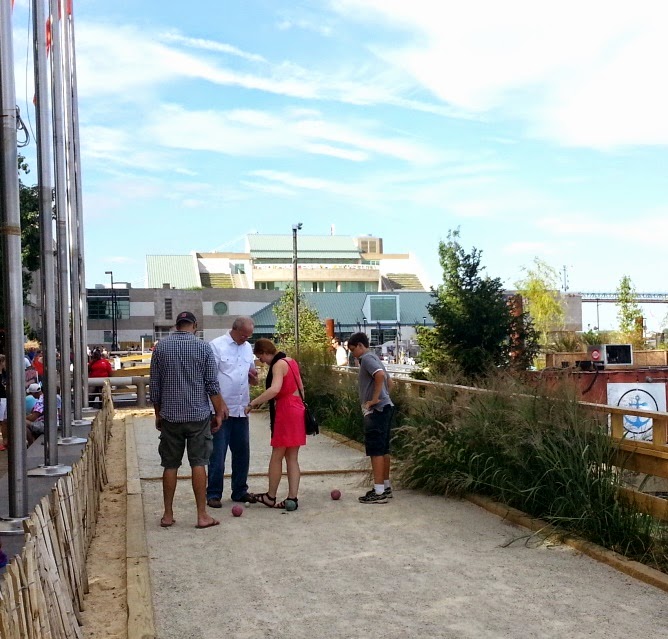 So if you can't decided who is closest you use the age-old trick of using your feet as a measuring stick (look at how intently the men are watching my brother's girlfriend Ashley measure). I always have a tape measure on me--they could have just asked :) They had one of those giiiiaannnnt chairs down there, and I almost had to pay Z-man to take his picture with me and A-train. Both of them were being equally uncooperative in alternate shots so I had to go for one that met in the middle. My brother in law Matt has the one with the entire family in it, but he's been negligent in his duty of sending it to me (ahem...Matt...). I think this may be the only photo I have of me with both nephews. 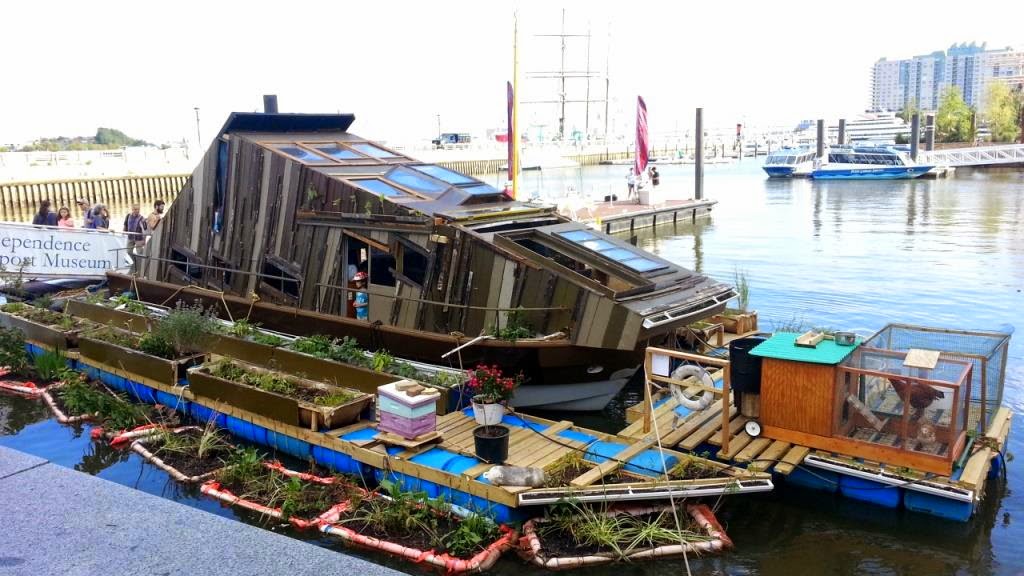 This boat was an exhibition for the Fringe Festival. It's supposed to be what Philly could be like if it became inundated with water and we all had to live in houseboats. The artist actually lived on the boat for six weeks. There's a floating garden and some chickens, and is supposed to be a combination of art, home, and farm. 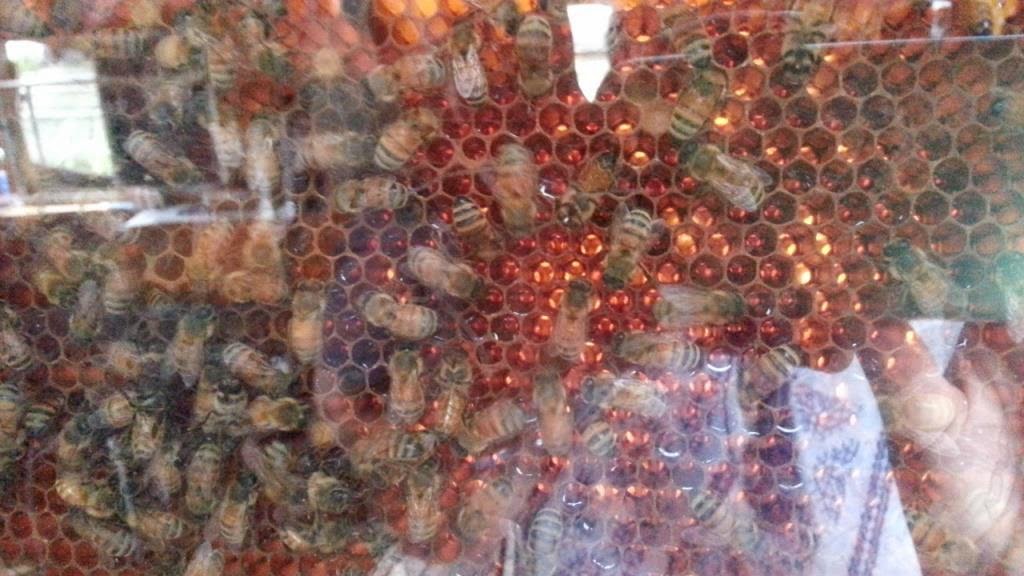 There were also hives in the windows. It was really hard to get a decent shot, but I had to try because bees. 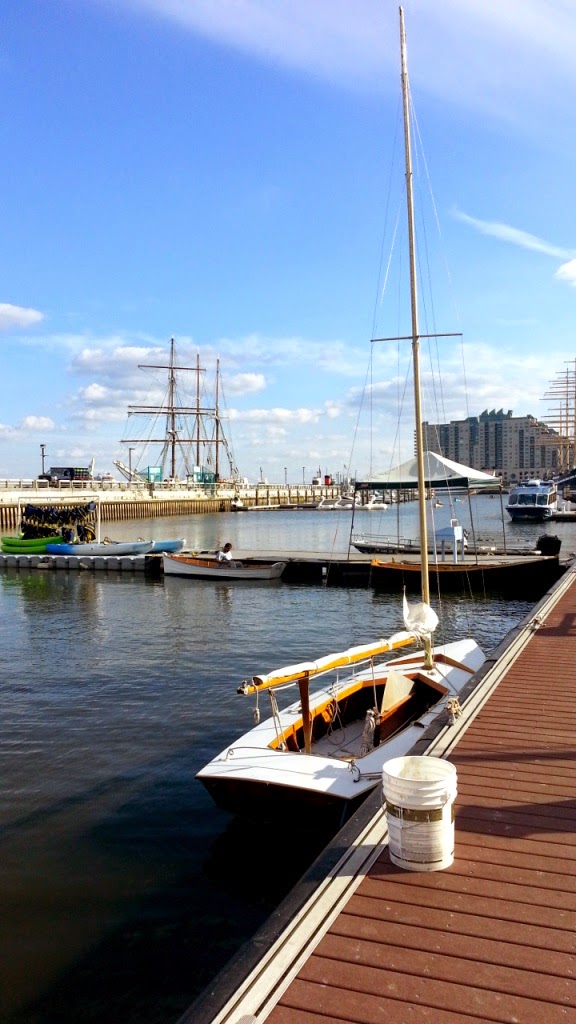 If people were so inclined they could have rented a kayak or a rowboat. We were not those people, as we would also be the people who would have to cancel dinner reservations because anywhere from one to all of those people fell in the river. 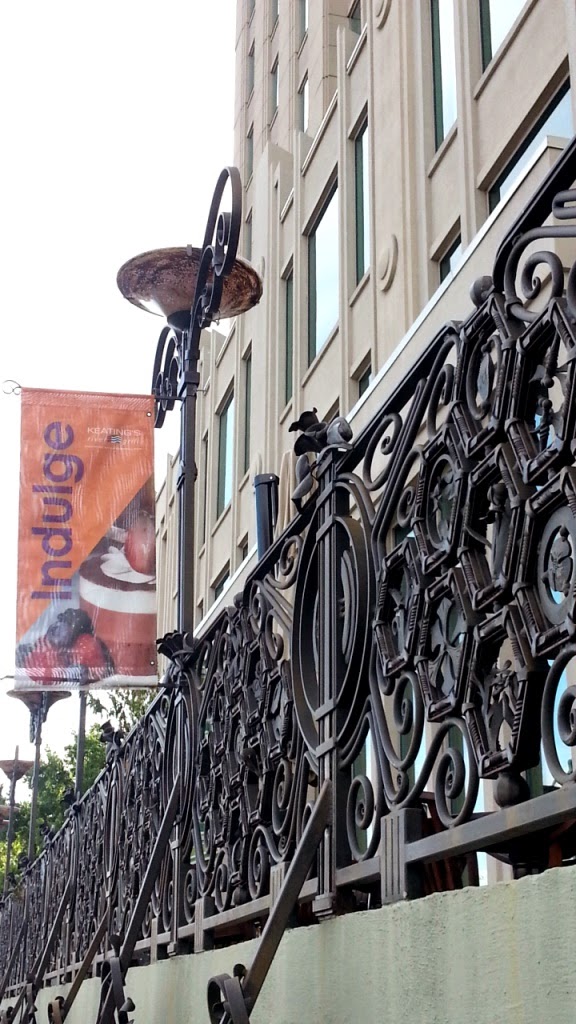 I fell totally in love with this fence. And I took the sign as a directive for what I should do at dinner. 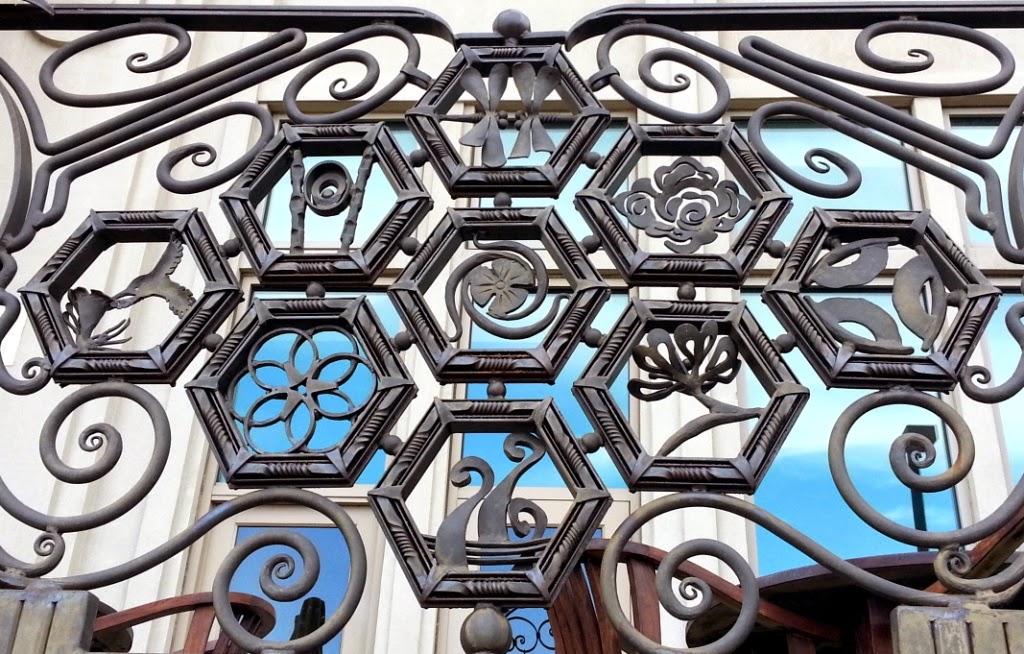 Each section of the fence had different hexie designs in them. My favorite in this section is that hummingbird at the far left. 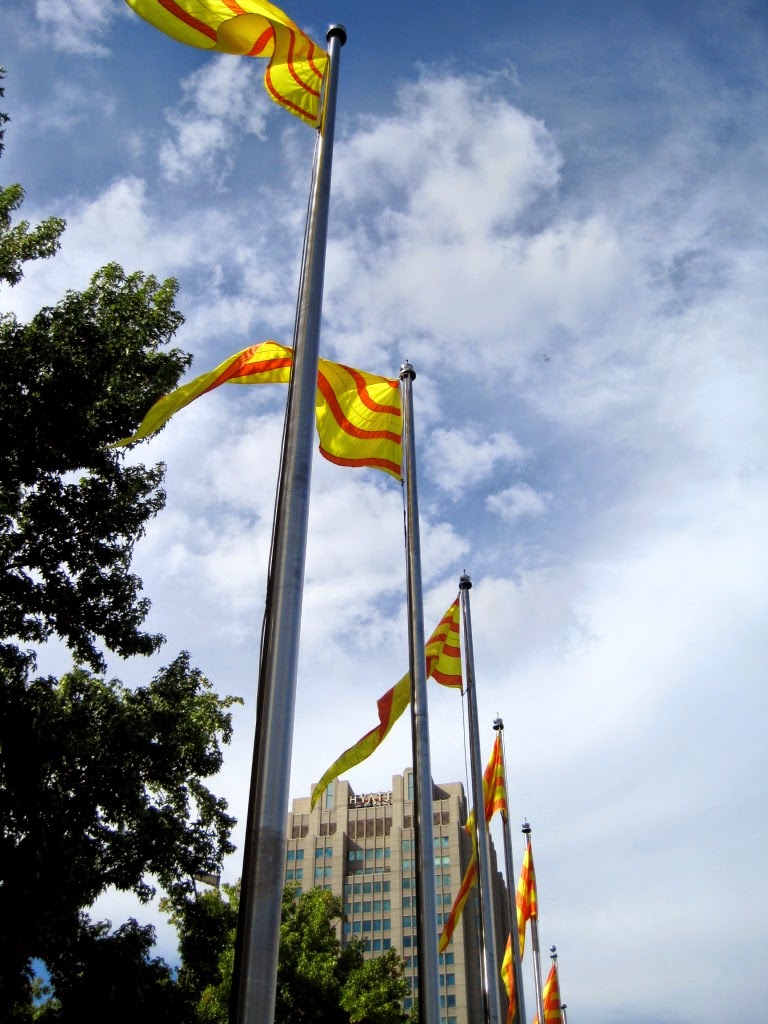 It was very nice and shady and even a bit breezy in the park, but the sun was actually quite warm. 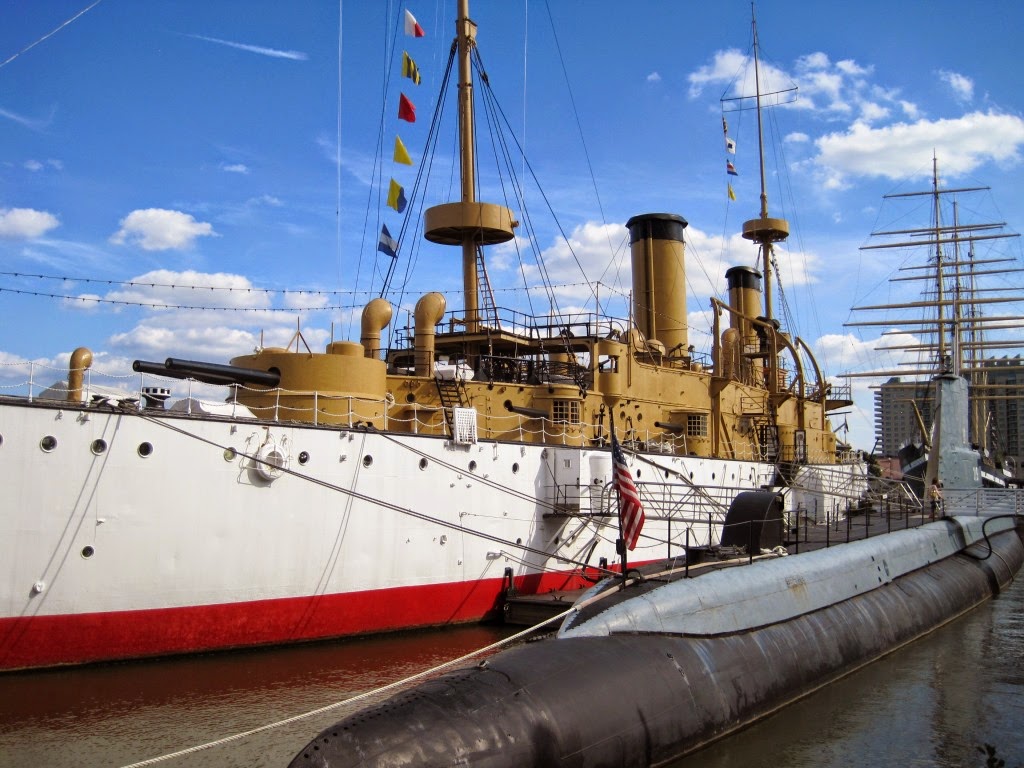 I didn't pay attention to if you could tour this boat, but it was massive. It's one of those things I can't conjure up in my mind, I have to see it to believe the size. 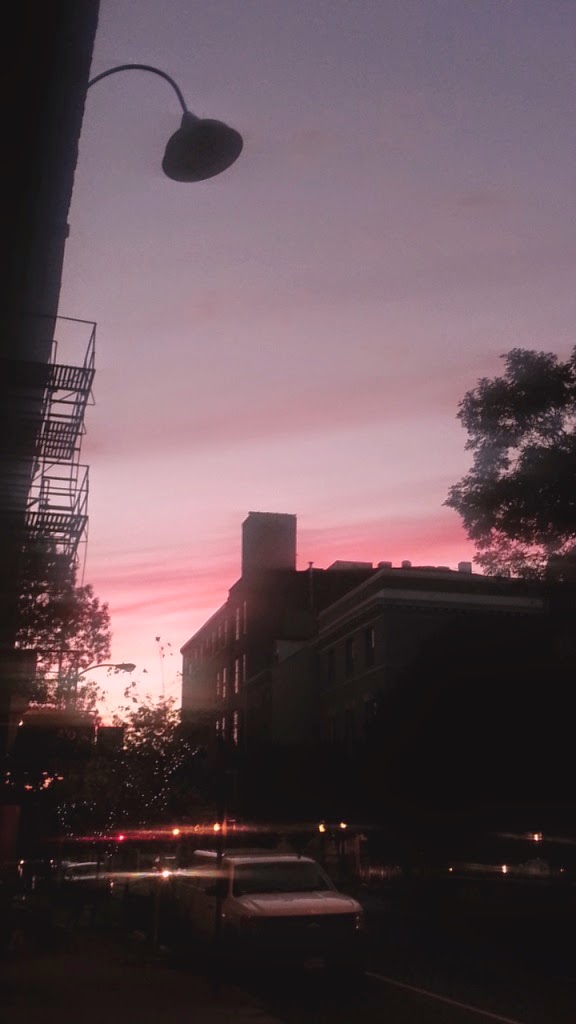 I didn't take a single picture in the restaurant (I was really hungry and very focused on my food) but we finished up just around sunset. This is the view on Race Street at around 7:30. The sun is going down earlier and earlier... 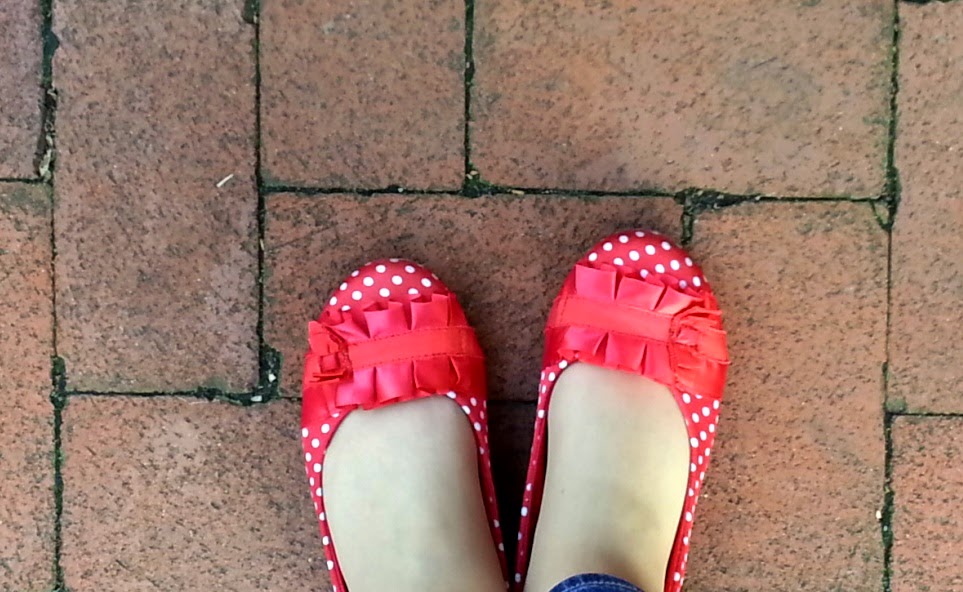 It was definitely a day for these babies.

I do love when we have our little family outings like this. My sisters need to plan more days like this (because I am not good at it. I make things--I can't be expected to plan them, too :)
From the convoluted brain of Bethany at 9:13 PM