For the past few years, we've made it a point to have a family Christmas outing. I look forward to them and enjoy them very much as there are Christmas lights, and a chill in the air, and all of us are together, and we end up eating yummy food. This year we had a few things we were back-and-forthing over, but we ended up heading downtown (you can read more about our last downtown adventure here).

We went on a Sunday this year, which, to my mind seemed like a great idea. Others thought it might be a little busy. That's an understatement. There was a tremendous amount of people, and it seemed sometimes as though you could hardly move. The thing that boggled my mind was the number of people who brought their giant horse-sized dogs to such a crowded place. It also struck me as an absolute truth of the universe that things would move so much more efficiently if people would put their phones down for five seconds, especially when walking. I would have loved to have stopped for pictures (we were at the Christkindl market at this point), but stopping to do anything other than pull out your wallet would get daggers shot at you from the eyeballs of other visitors.

Eventually we were all able to somehow get ourselves together for the Macy's light show, which was so crowded we couldn't even see it. So we all headed upstairs to the Dickens Christmas Village instead. My dad was having some kind of fit because we weren't sticking to the plan, and who had to pee, and who was really hot, and all that stuff that makes a large outing so...eventful. Eventually we all got into an incredibly long line to wait (our dinner reservations were for 5:30) and just tried to make the best of it (though there were a few times I was ready to lose my temper--WHY don't people find it necessary to see that their children behave anymore? I swear my mother would have hung me from my ponytail if I even thought about doing a fraction of the things kids do today--again, their parents' faces are buried in their phones while the kids are literally pulling things over and screaming. Grrr... OK, rant over).

OK, so we wind our way through, and eventually see signs that we are getting closer. 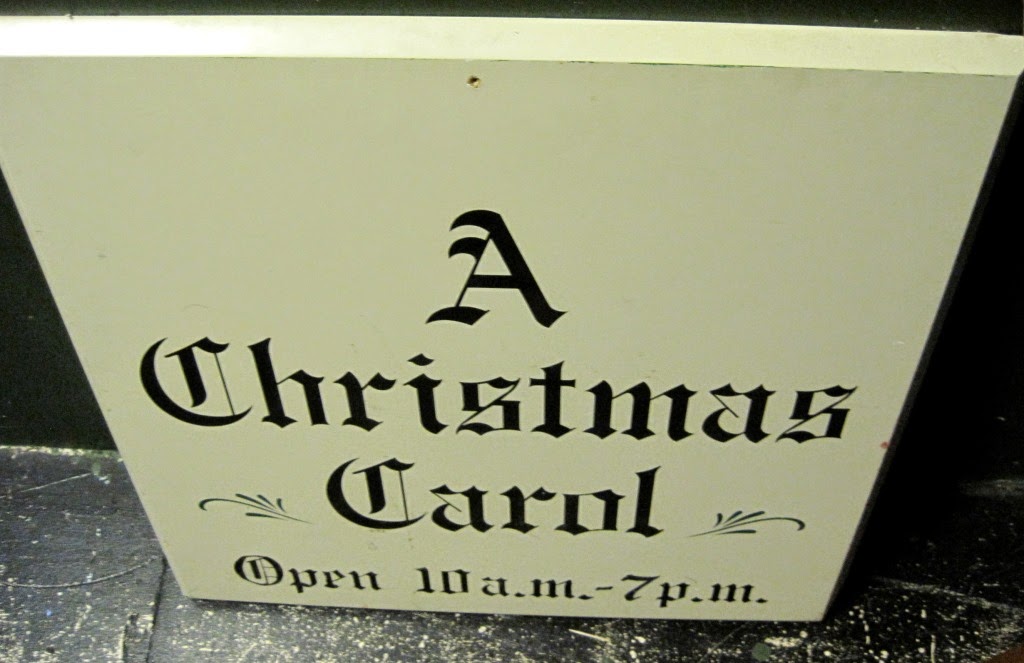 The last time I saw this was twenty-five years ago. We went after school when there was no line to wait in. It really hasn't changed a bit in all that time. 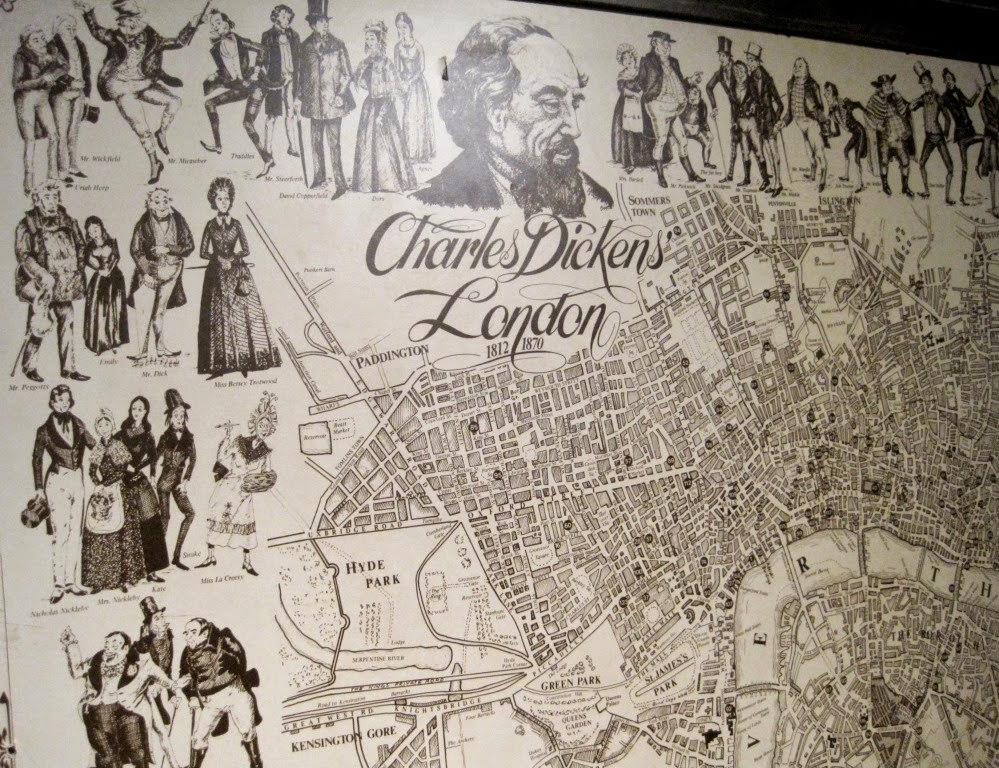 The first thing you see is Charles Dickens saying...something. We didn't stop for this part as there was no turning back at this point and we had a dinner reservation that we were all more than ready for. 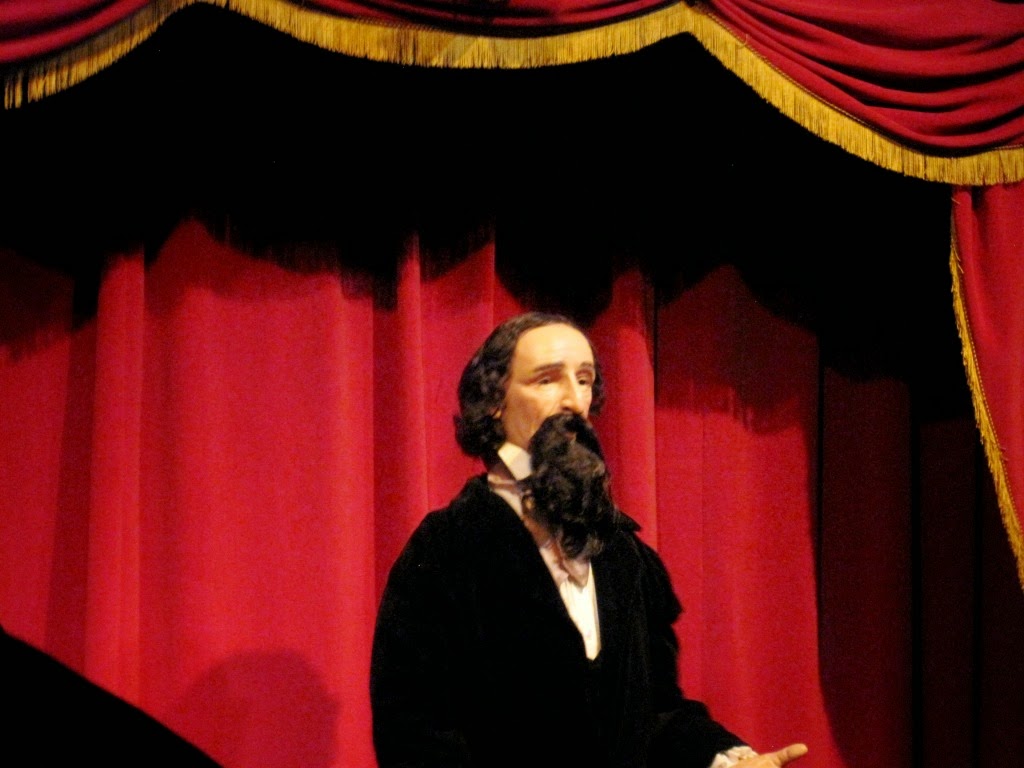 The whole thing is set up to mimic Victorian London streets, as Mr. Scrooge would have seen them. There are mechanical figures that I think are the same ones my mother saw when she was a girl (and they are in great shape, considering the abuse they take from the children walking through as their parents say "No, don't touch" in that disinterested way that people who are texting have when "interacting" with others). 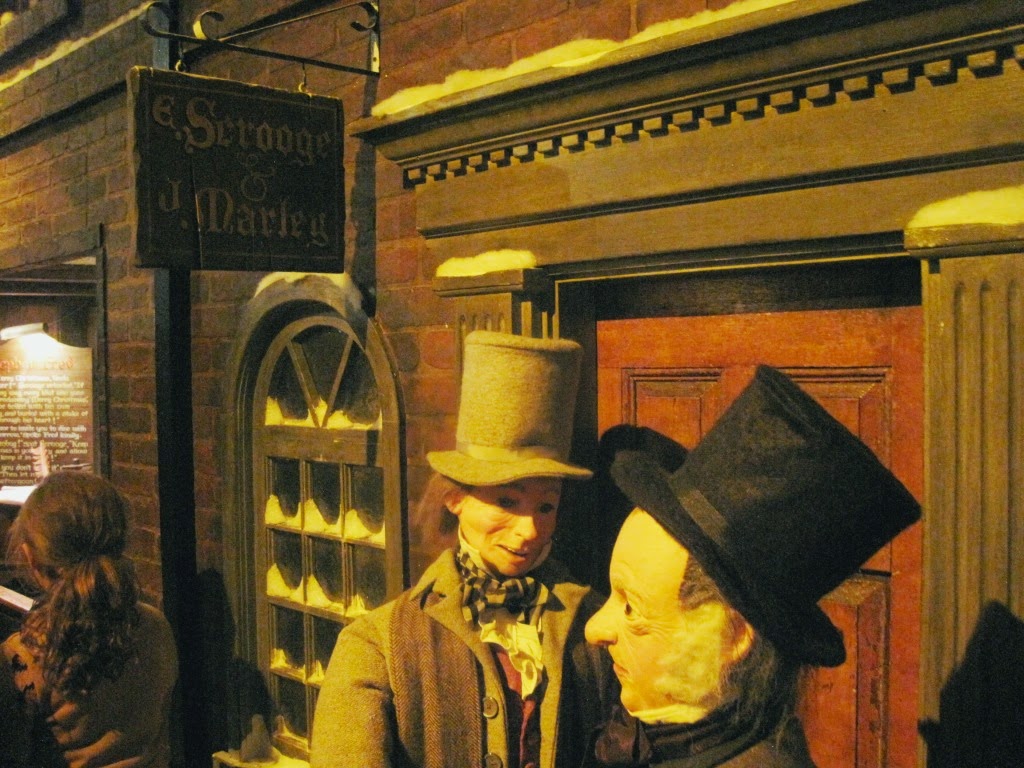 There are quite the number of scenes set up for each chapter (or stave, as Dickens calls them), with placards set up to tell the story as you move through the lamplit "streets." 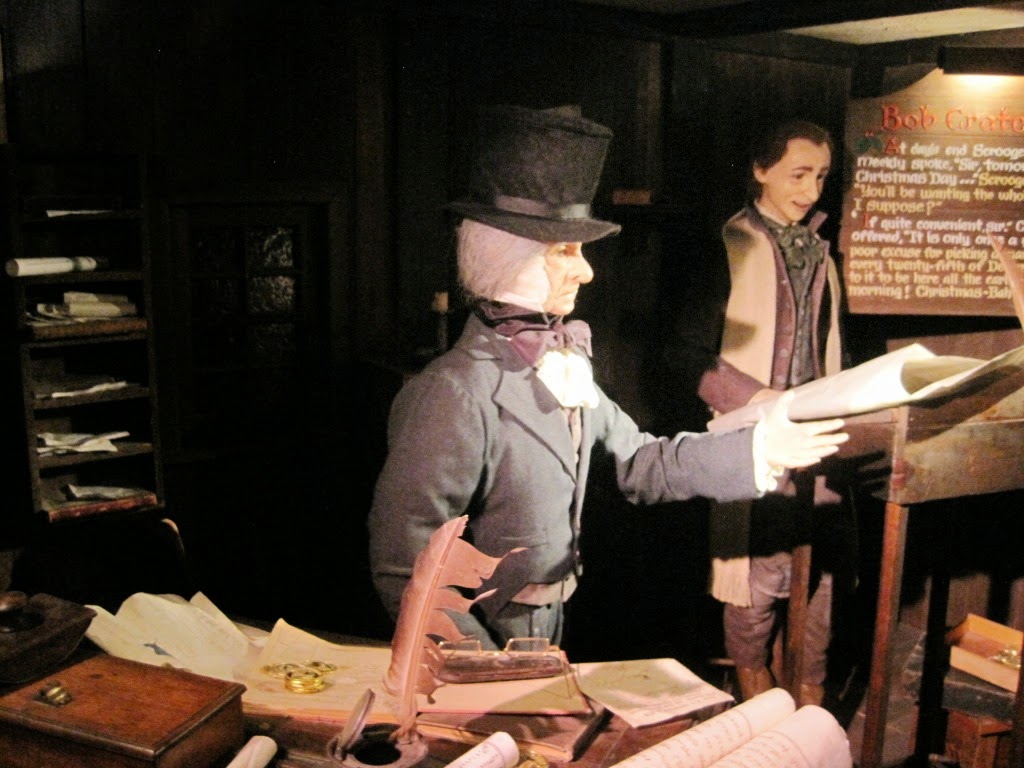 The attention to detail is fabulous--the papers on the shelves in the background, the glass that is just so to give the hint of snow falling outside. I wouldn't mind having that decorator's job. 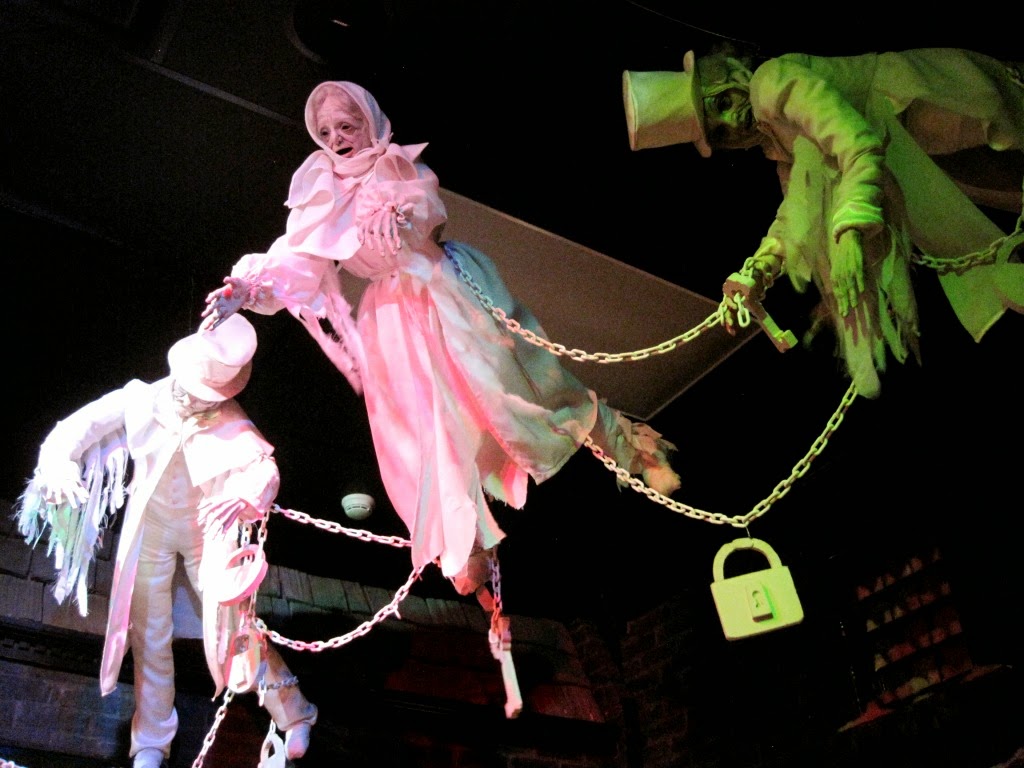 I guess I never looked up before, but I don't remember these ghosts (that Marley shows Scrooge when he's explaining what the nighttime situation is going to be). 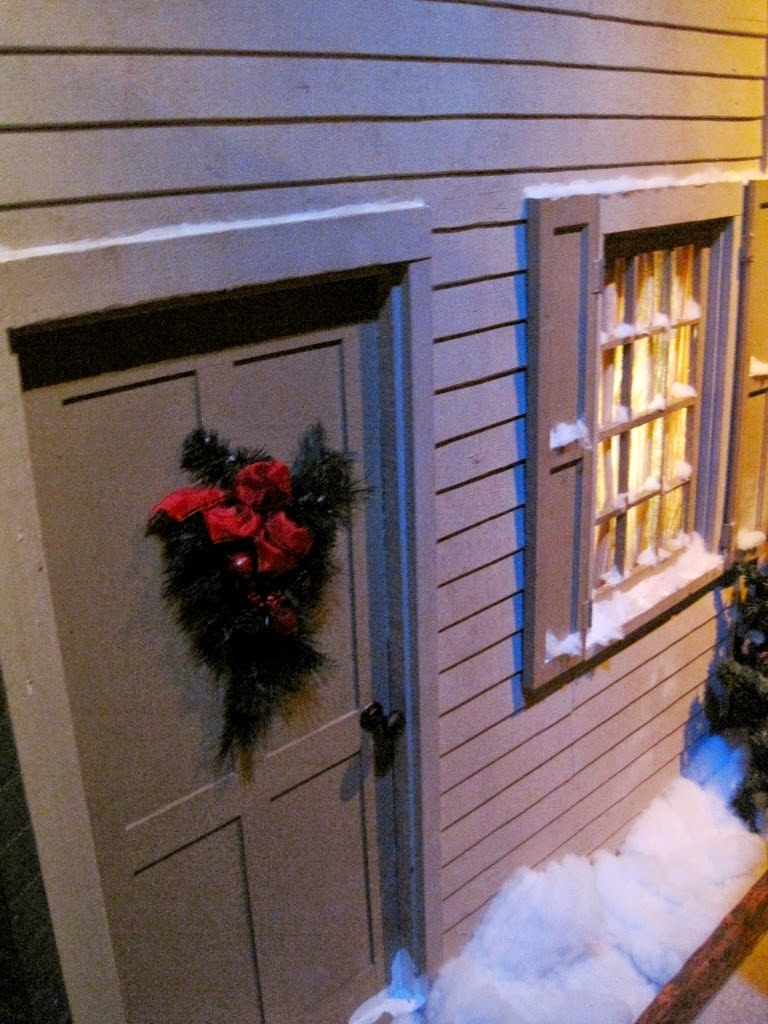 I do remember being small and wanting to go into these little houses so bad. Wouldn't you? Look how cozy and warm and inviting it looks! You just know there's a fabulous bit of Christmassing going on in there... I used to want to climb into the exhibits and live there (but I never would have dreamed of doing so for fear of getting the 'look' from my mother). 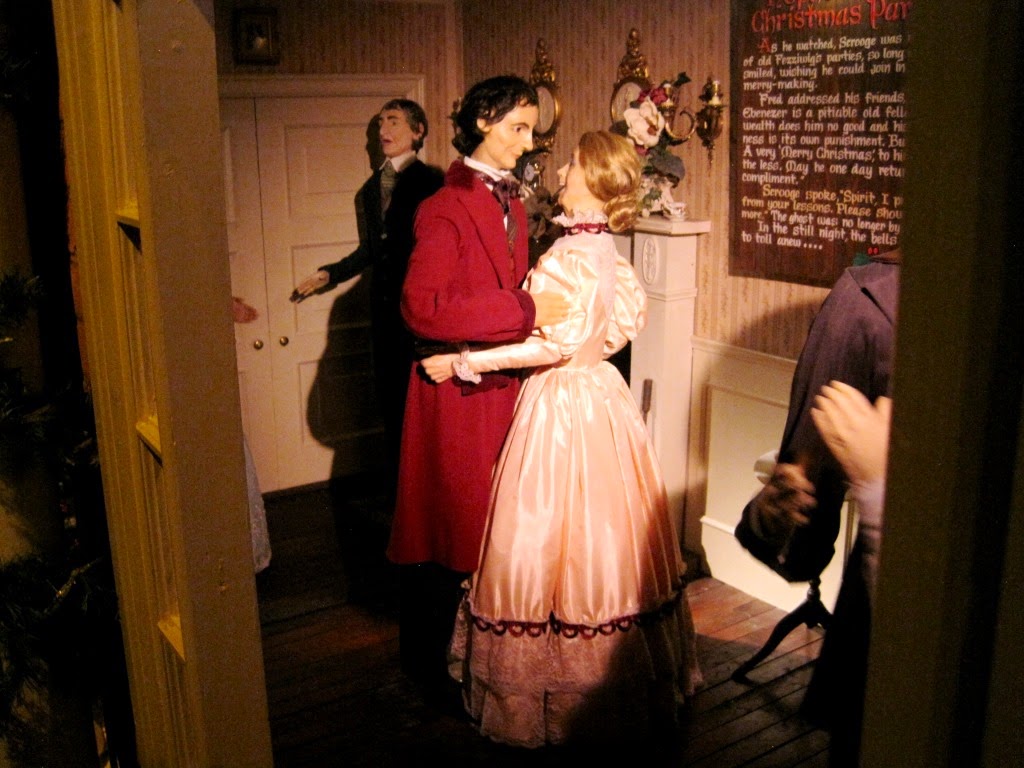 When you emerge from the exhibit, you don't realize just how toasty it was in there, as the fresh air hits you in the most welcome way and you feel you can breathe once again. We thought we would catch the final light show but we had missed it. I took this pic of the sales floor while waiting for everyone to gather. 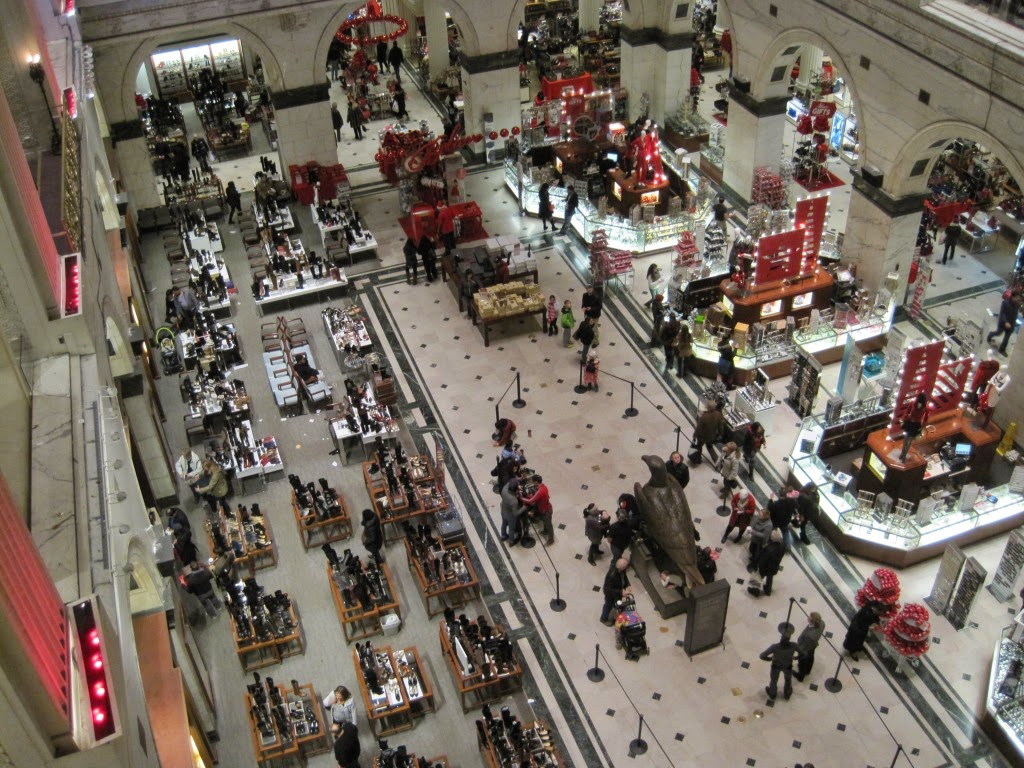 It seemed that lots of folks had headed to dinner as it looks quite empty, but not long before it seemed every square inch of floor was covered with people. There was also a lovely sense of quiet that sounded so wonderful after a few hours of very close quarters.

We headed to dinner at Maggiano's, a restaurant that is very popular and where a reservation has always eluded us. I checked it on a whim for availability, and jumped at the chance. I have never seen so much food, and every bite was delectable. If the only thing we had done on Sunday was go to dinner I still would have been a very happy camper--it's just so nice when everyone is together and happy and cozy.

On the walk back to the car, we cut through where the Christkindl market is, but it was all shut up for the night, except for a hut here or there. 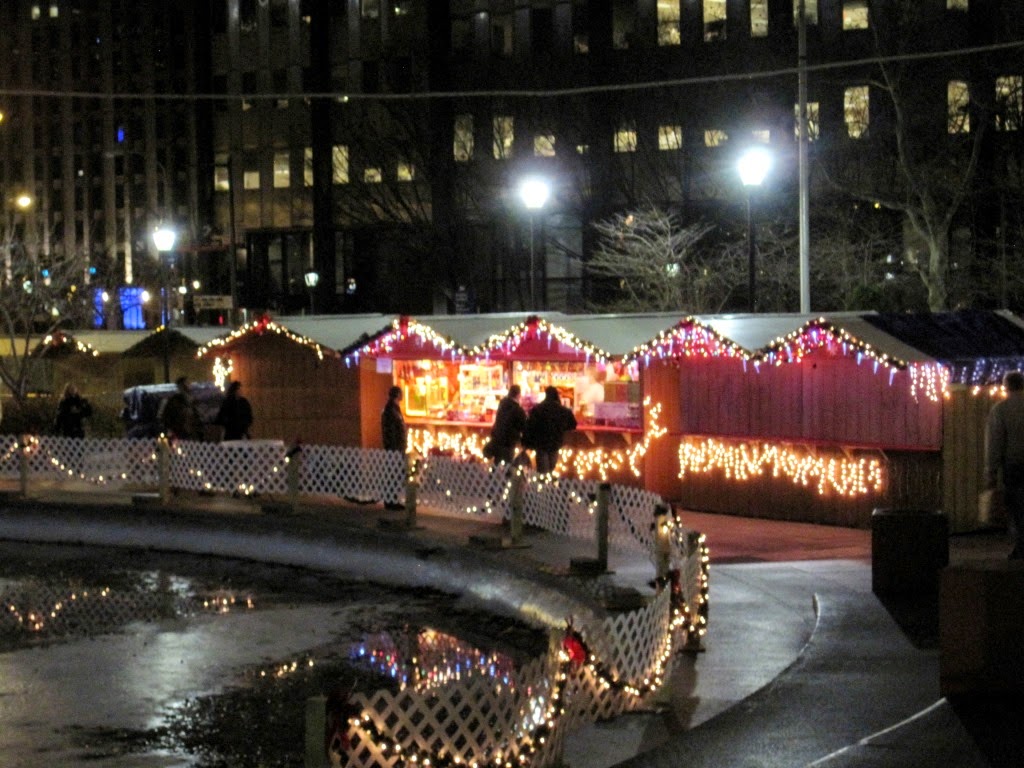 It was a lot more enjoyable with no one else around, haha. As much as I love folk art and crafts and Christmas, I have such a low tolerance for close crowds. I can almost feel my brain glaze over. But this short walk through the quiet square was lovely and calming. 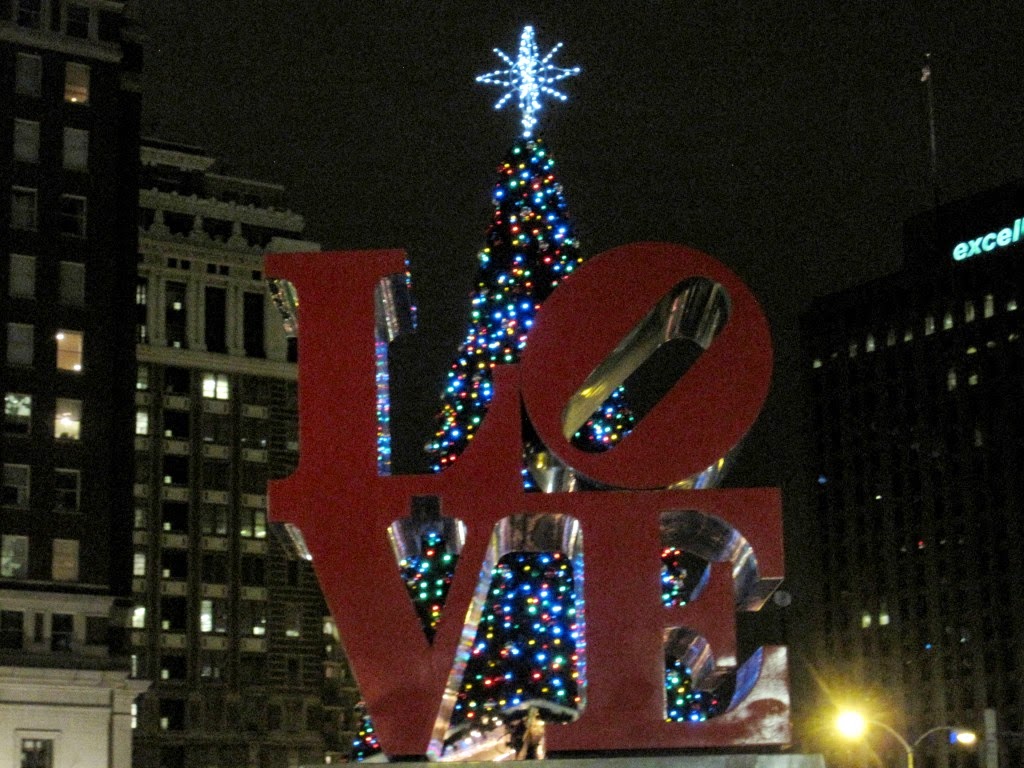 Mmm-hmmmm. I do love Christmas.
From the convoluted brain of Bethany at 10:43 PM