My Sweater Is No Longer Trying to Swallow Me Whole

On Christmas Eve afternoon I started a sweater. It felt like just the right time--later afternoon, Christmas movies on, tea nearby, a few cookies... 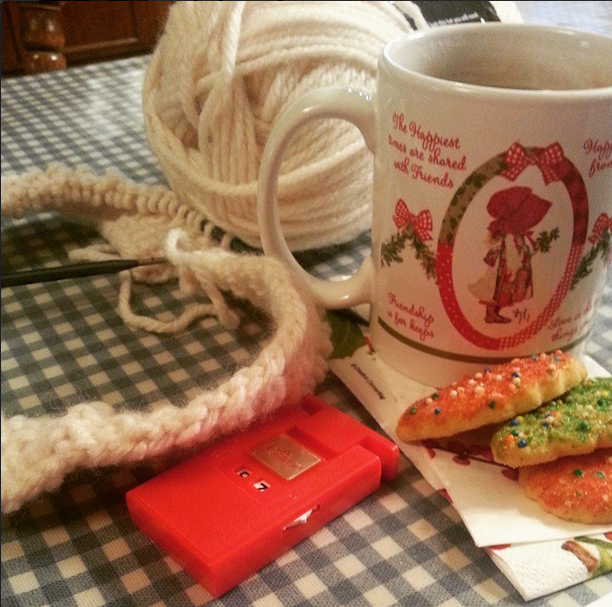 This is the Three Rectangles-Two Triangles Easy Knit Sweater Jacket from Very Pink. It uses a mock rib stitch that gives this fabulous texture on both sides. This is what is supposed to be the right side-- 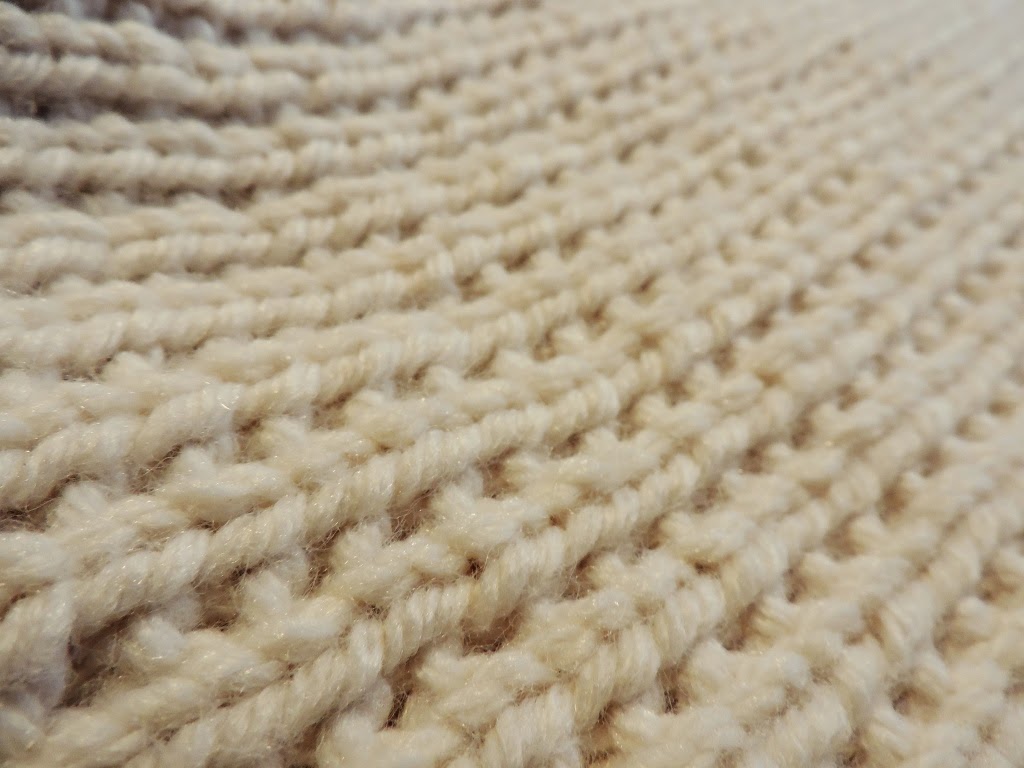 --but I think this could just as easily be the right side if you felt so inclined: 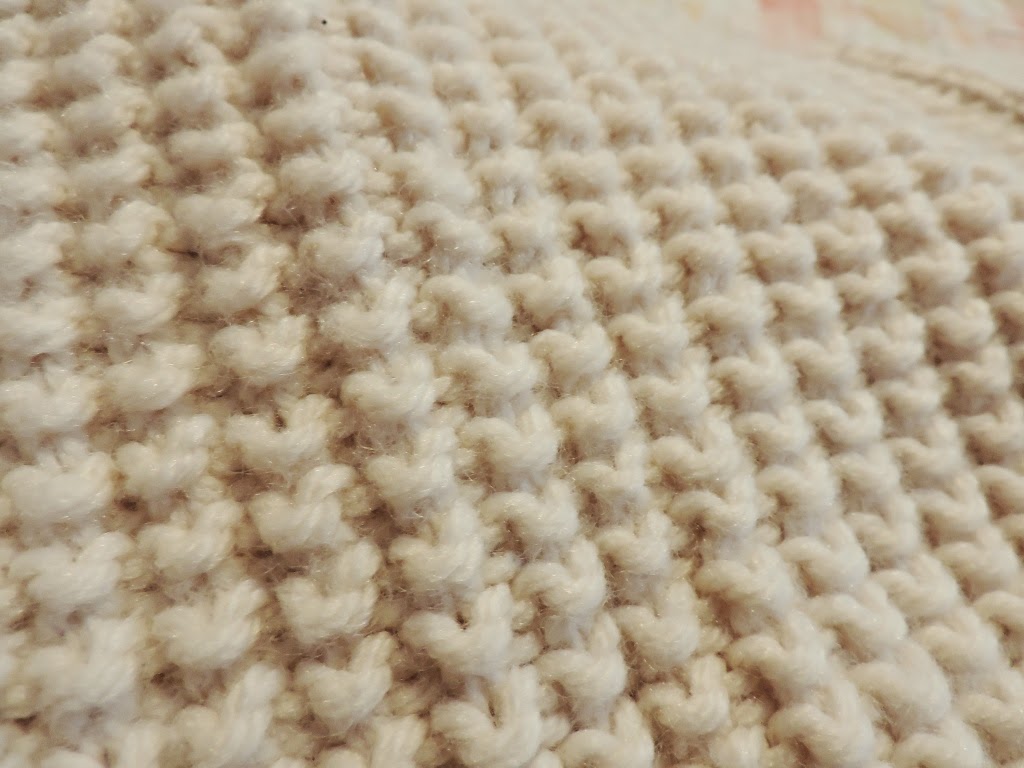 I opted for the first picture to be my right side as I can imagine myself getting those chunky purl bumps caught and pulled on everything. I spent a huge amount of Christmas vacation settled on the couch with bottomless mugs of tea and endless handfuls of these yummo chocolate covered pecan brittle bites, knitting and purling away. 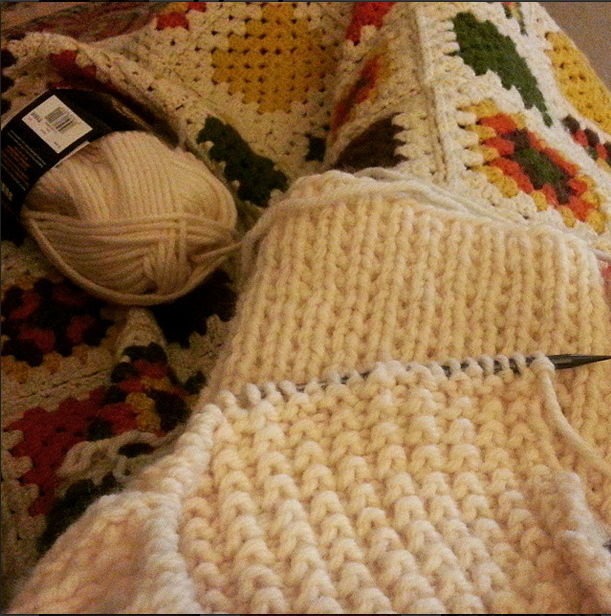 I used Lion Brand Wool Ease Chunky in 'Fisherman' for this sweater, and I love the color and the texture it gives. It's one of those perfect winter colors that goes so well with everything.

I made the large size either completely overestimating the size of my bust or underestimating the amount of positive ease in this sweater (or, most likely, both). This sweater came out quite large and boxy as there is no shaping involved. It came out of the dryer so soft and squishy and cozy, and was one of the nicest sweater-seaming jobs I have ever done that I felt so stupid for making something way too large for a whole football team to wrap up in at once. I had woven in my ends nice and neat and couldn't find them again to make unraveling a consideration. I didn't want this to go to waste as I paid a bit for the yarn. So I put this aside to see what would happen. I mentioned at the end of this post that I was considering knitting up a belt, but there was so much fabric that a belt would have looked odd.

I didn't take a before shot, but you can imagine me looking like I was attacked by an afghan and lost the battle. But after some puttering about and consulting with one of my design executives (aka my mother) I knew what to do. I had to remove some of the bulk under the arms by pulling the extra fabric towards the front (as it was sticking out in the back in an odd way, too), so I created a bit of a false lapel and sewed it in place, and added some buttons for a bit of visual interest. 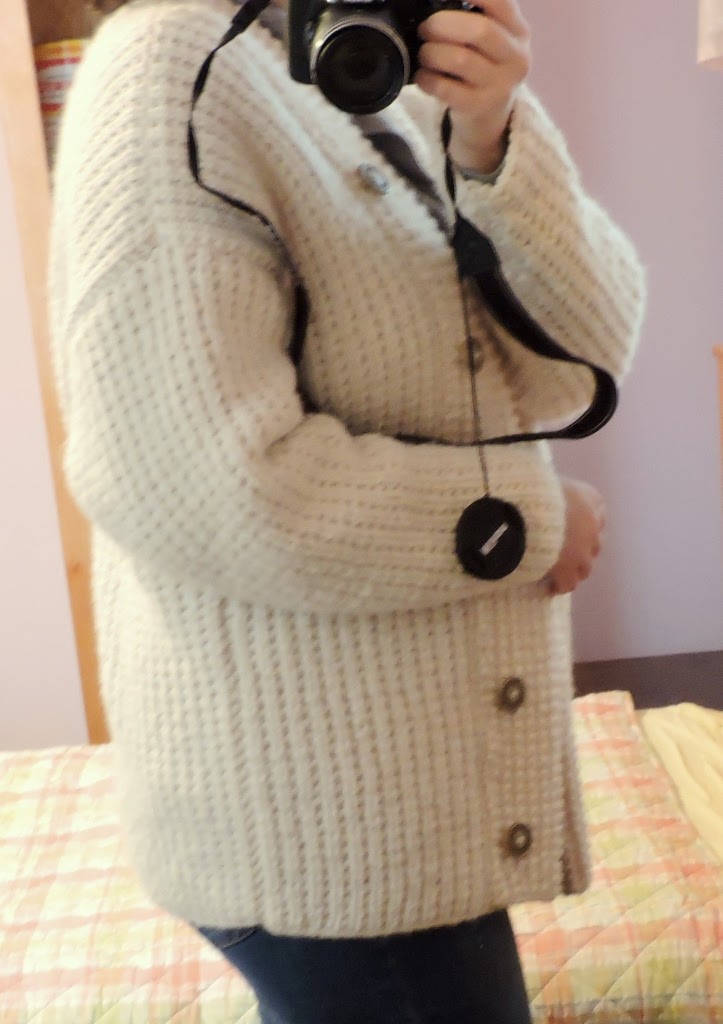 You can see how it lays nice and flat over my rump now. It is super hard to take a clear shot of yourself at a weird angle. I really need to get one of those remote timer thingees. 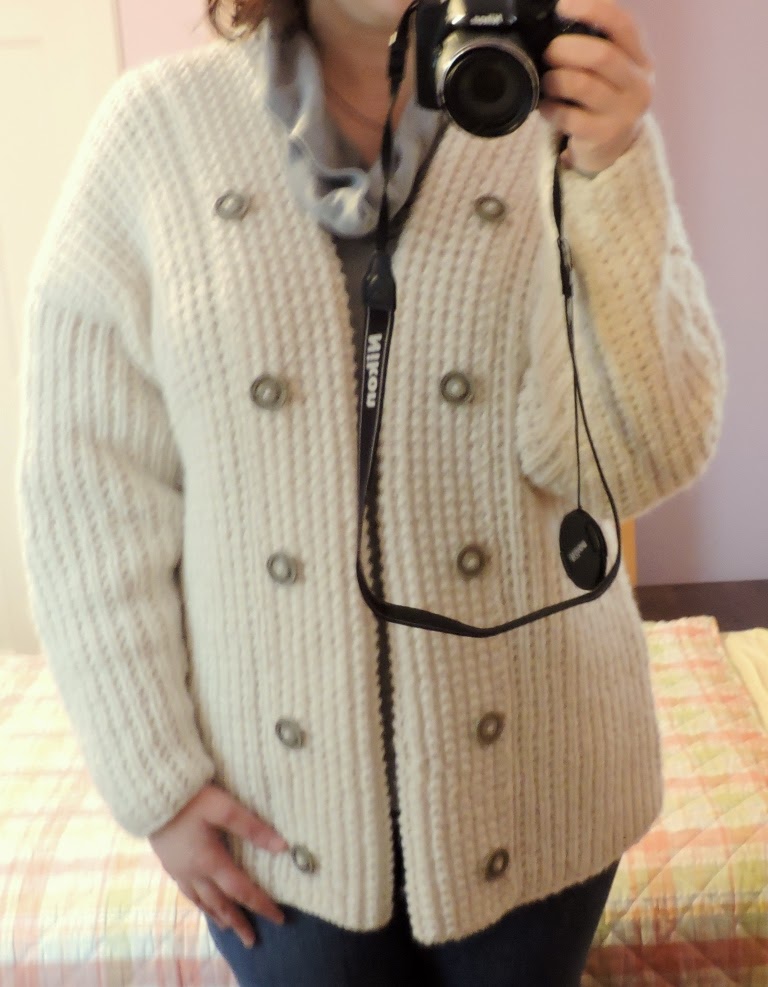 If I pull it all towards the front it meets up with the edges nice and flush. If I leave it more relaxed it opens to about here: 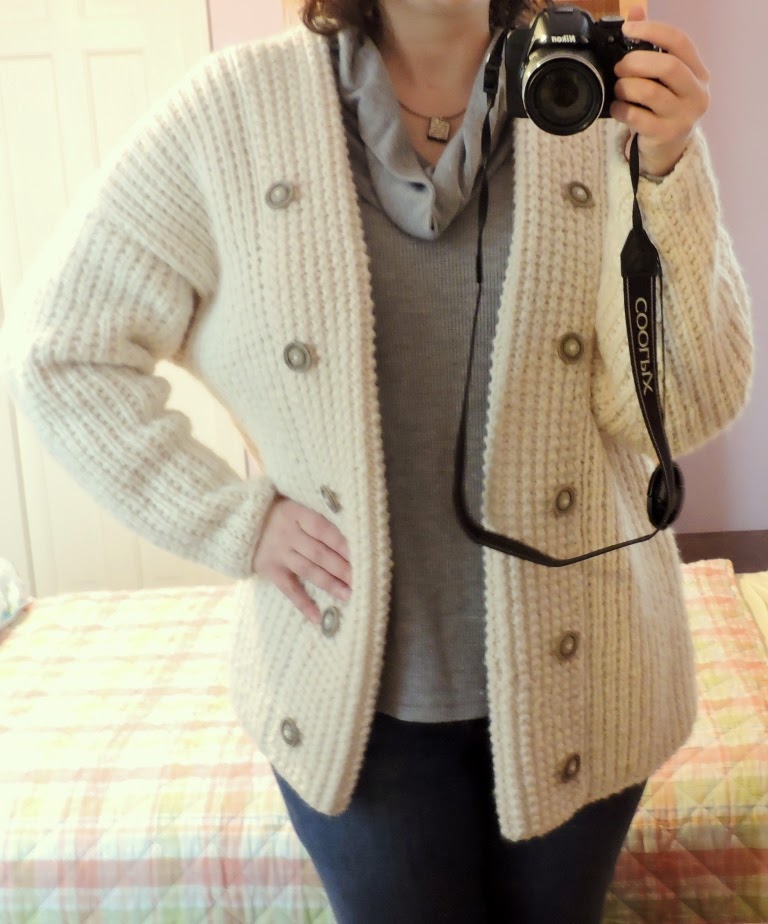 It was in the twenties here on Saturday and I threw on a scarf and gloves and wore this out to give it a whirl. It is so warm and cozy but without that restrictive feeling that a regular coat has. I keep feeling the urge to put my hands in the non-existent pockets, but I'll have to get over that. I know if I add pockets to this I'll have them stretched and distorted in no time. A lot of the bulk is gone from under the arms, and it's not so boxy looking. If I had made a smaller size from the beginning I wouldn't have had any issues, but I don't think this is too bad of a fix to not waste the yarn or the work. 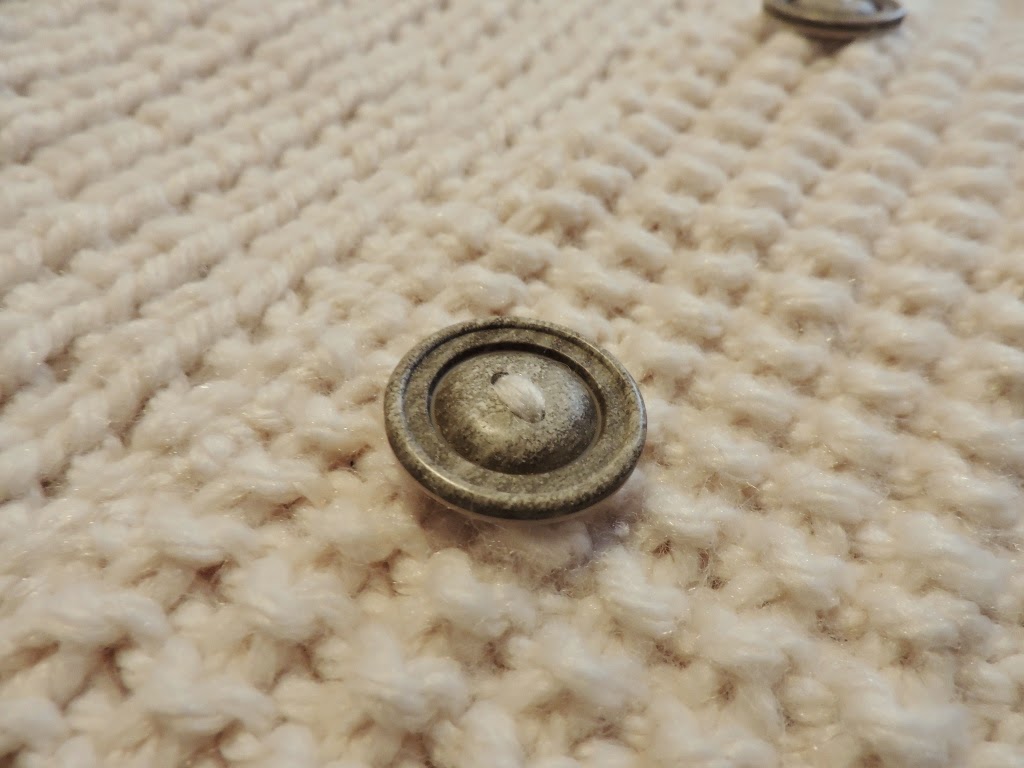 The buttons looks like old antiqued wood, but they're plastic (washability is key around here). They're totally non-functional and I might need to move them around a little bit, or take one or two off, but they're good enough for now. And since I'm lazy in odd ways they'll probably stay that way. 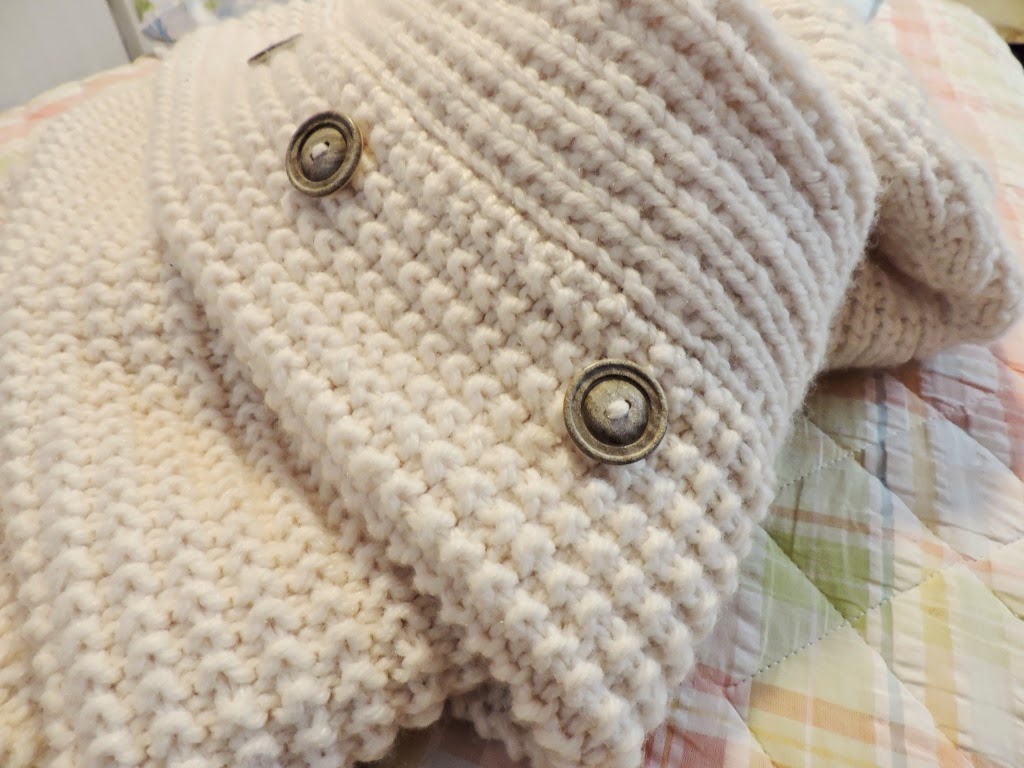 I swear I can bench press a truck after making this thing as it's quite heavy. It was a fair bit of work, a little bit of money for the yarn, and a slight amount of frustration at the end, but it was very worth it as I really love the finished project. Apparently putting it aside and waiting for inspiration was key. Usually I'd get mad and shove it in a corner and sulk. Could it be I have matured? Geez, I hope not.

From the convoluted brain of Bethany at 8:19 PM