The Uncropped Tale of a Cropped Cardigan

Ahoy ahoy! How's your year going so far? I can tell you right now that mine is simply smashing. Starting on the first itself, I woke up with a stiff neck that has yet to twenty-three skidoo. I got foundation on my most perfect white shirt (and if you've ever done that you'll know it's the most impossible sort of stain to get out). And finally, I decided to break my camera. I wanted to take pictures of the sweater you're about to see, and I don't even know what happened but it hit the floor and is nice and kerplooey (the very nice man at the camera repair shop suggested not fixing it but buying a new one as the cost/worth ration wasn't in my favor). I managed to score a very sweet deal on a new camera with which I'm on a learning curve as it's a different brand, but so far I dig it, man. OK, enough about me. Let's get on to the whole point of this post, and that's my sweater. Which is still about me, but different.

OK--let's start off with how I look when I'm slightly nauseated because I just broke one of my favorite things. 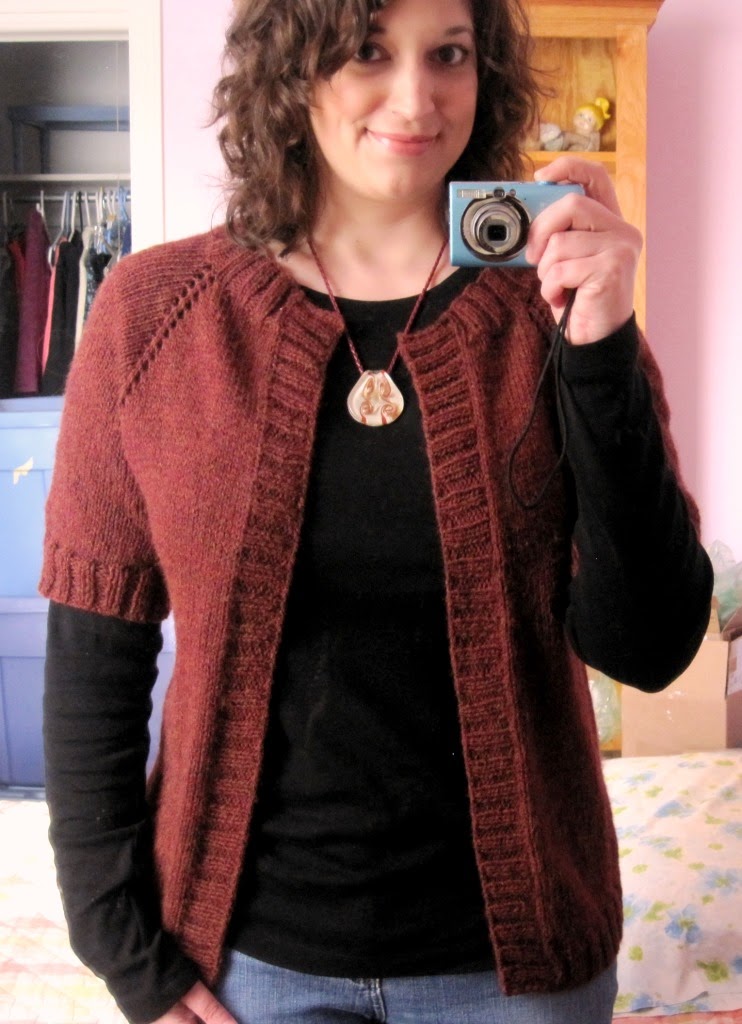 A few notes: I'm in the spare room, hence the interesting...decor. Two, there is nothing on my shirt in the tummy area--I have no idea why it looks like I just dropped a powdered doughnut on myself. And third--these pictures are not so hot as I broke my good camera (in case I forgot to mention it).

This pattern is a Lion Brand free pattern (you just need to register with the site) and the yarn is Lion Brand Wool Ease in Chestnut Heather. I'm not fond of it with the black but about half an hour prior to these photos was the aforementioned makeup mishap. I would never have considered making this sweater by viewing it on the LB site, but I saw on their blog a version that I fell in love with. The video tutorial makes everything so much easier to do nicely, and explains how to get a more customized length (I don't do cropped as I feel like a linebacker busting out of their clothes).

This is a top-down knit raglan cardigan--that made me nervous but it is so stinkin' easy it's crazy. The raglan increases are yarn overs, and give these delightful 'holes' as a design feature. They're on the back, as well. I did have to rip back a little when I messed up that part as it would have looked terrible in the finished product if they didn't line up. 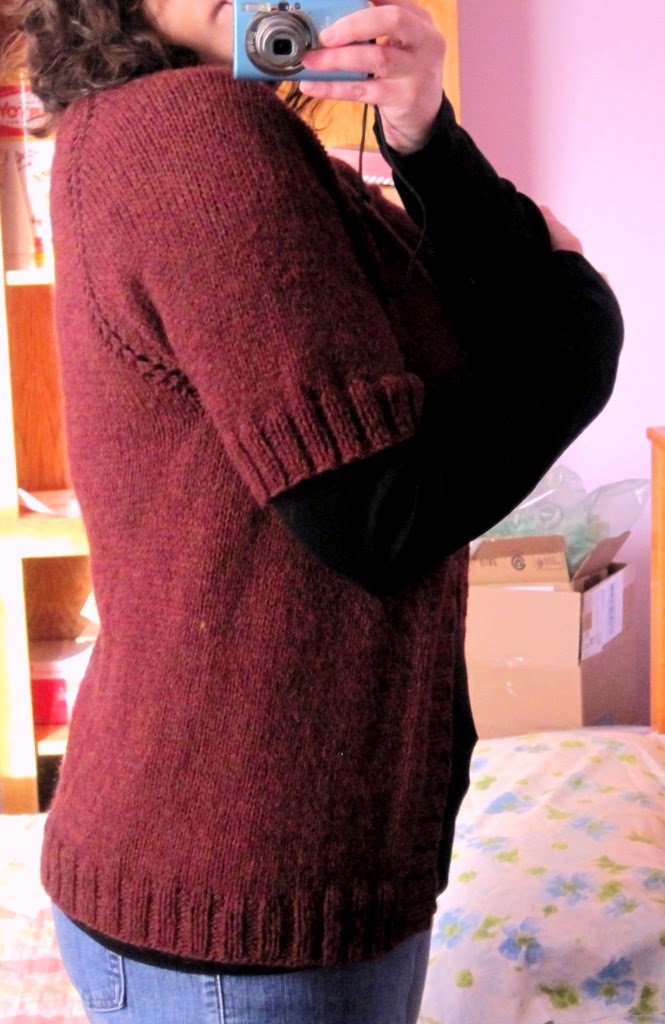 The only part that made me very nervous was the pick-up-and-knit button bands. The tutorial certainly helped, but it took me forever to do it, just the same. I did manage to pick up a nice straight line, though-- 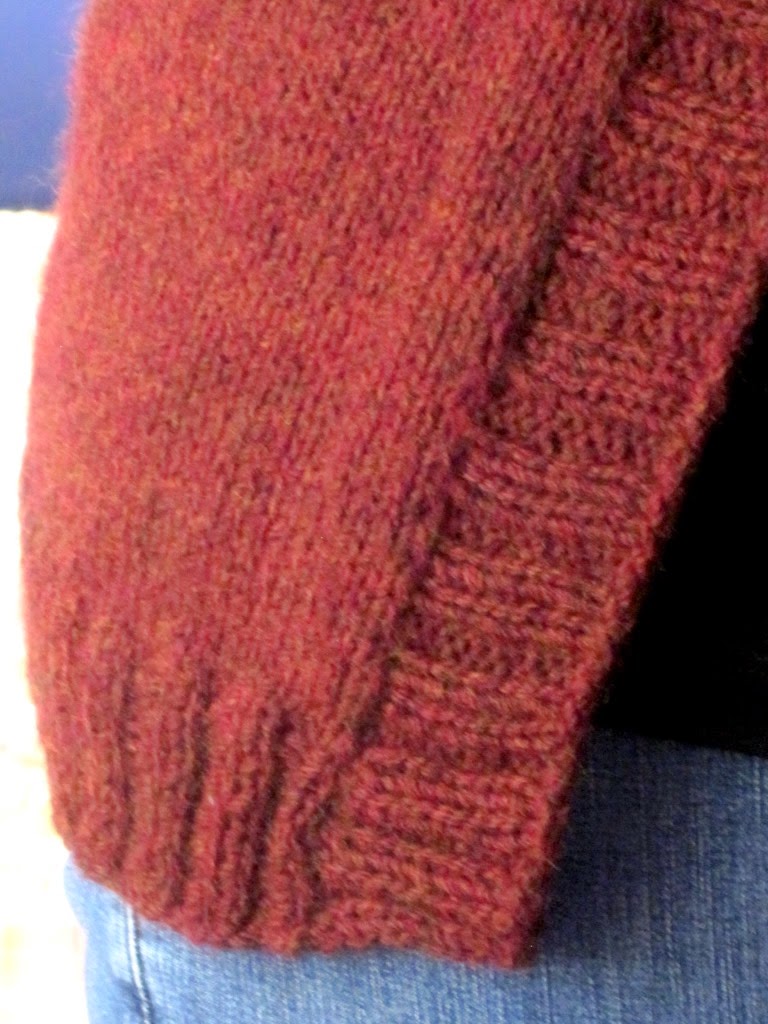 It even looks nice and neat on the inside: 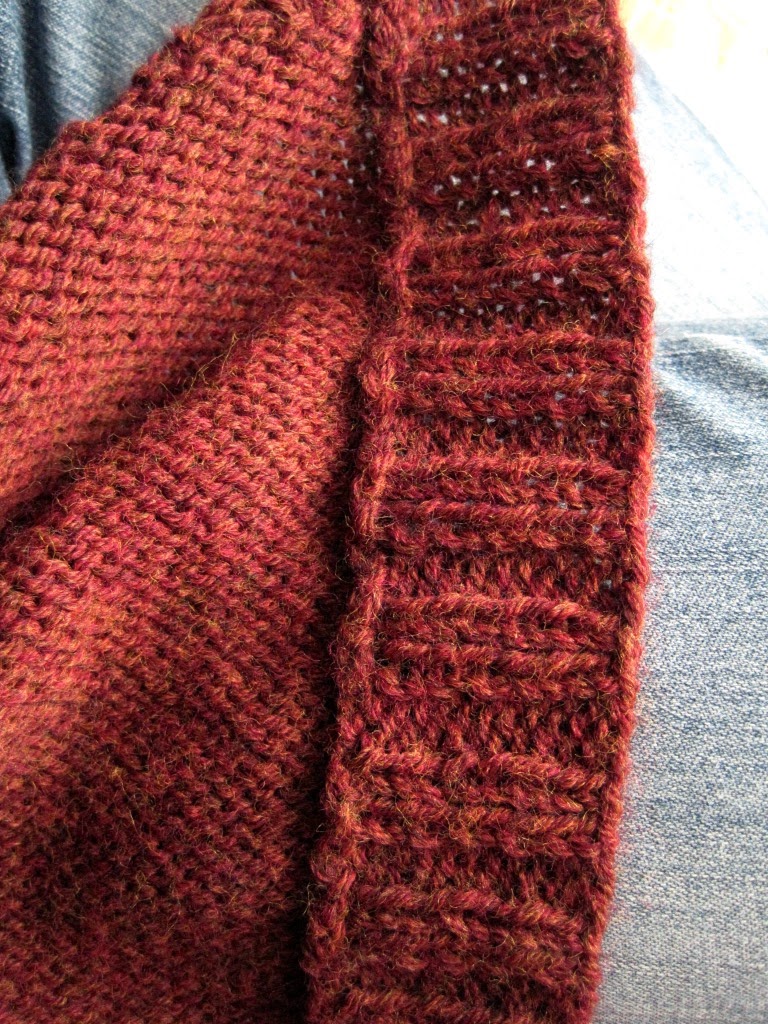 Even with lengthening the sleeves a few inches and the sweater itself by several this was still a pretty quick project. I've never before worn a short-sleeved sweater so it's something I have to get used to (I keep feeling the urge to pull my sleeves down). But it's warm and not heavy or bulky or anything. There is only one thing that bugs me: 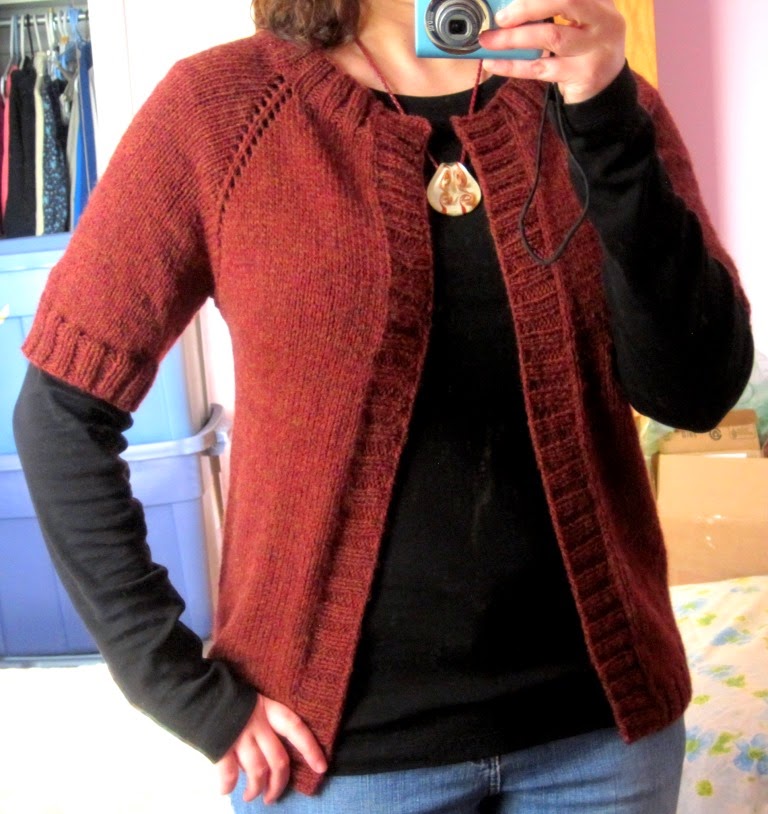 See that kind of ripple at the neck? I did block this sweater, so I have no idea why it's there. All I can think of it is that it's the ribbing pulling a little bit. Any knitters out there have any idea on the why and the how to get rid of it? Again we're ignoring whatever is on my shirt (I think it might be a mirror smudge).

I think I'm on the wane in my sweater knitting obsession. I'm almost finished a sweater jacket, and then I think it will be small projects after that. I got a big box of yarn for Christmas and I can't wait to turn it into an afghan. My sister wants a slouchy hat. And I've got to find a sewing project to get my motivation going again. I don't know how people who never have anything to do can stand it.
From the convoluted brain of Bethany at 9:36 PM