For years my mother has wanted a bird feeder. Not a difficult thing to find, but a difficult thing to remember that you want, so to speak. Many a trip to a retail location that sells these ended with a head slap and a "Dammit! I meant to get a bird feeder!" My sister bought her one recently, and I do believe the bird seed companies have seen an exponential increase in sales ever since. 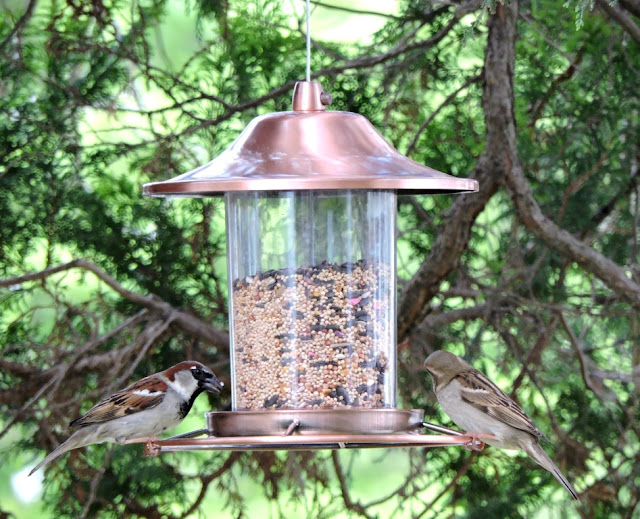 There are usually about half a dozen assorted birds on here at any given time, making absolute gluttons of themselves. I'm honestly surprised they can still fly. 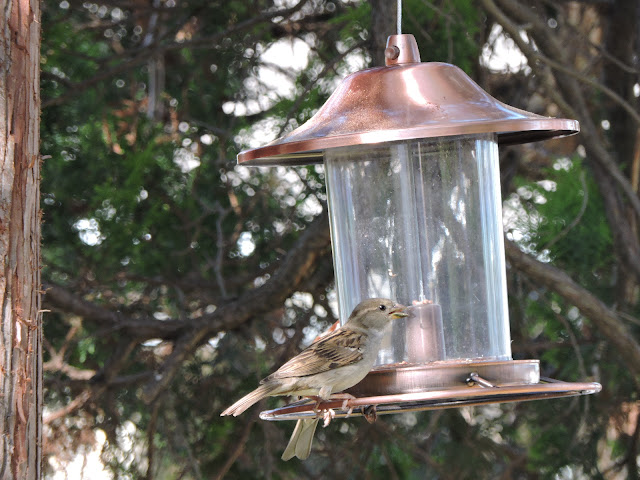 They empty this thing almost as quickly as you can fill it, which my mother has cut back to once per day. The tree this hangs in has a million billion birds in it at any given time that all look alike, so it's hard to tell if they share nicely or if there are a few hogs in there. 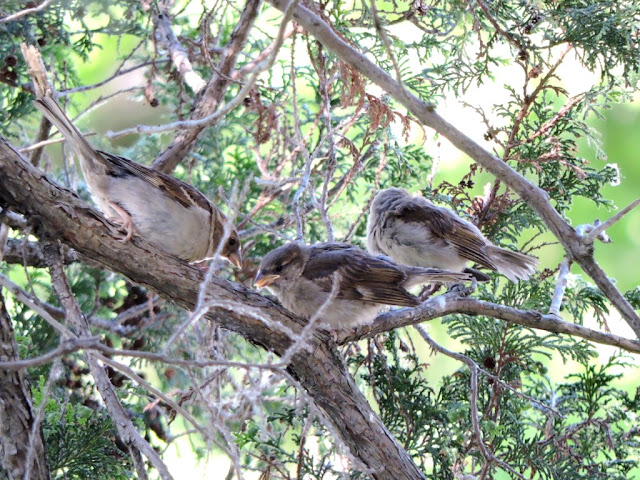 A few days ago a couple bluejays showed up. I couldn't get a photo, naturally. Did you ever listen to a bluejay? What a cantankerous sounding bird! I feel like if it was human it would be one of those whiny people who never shut up and complain about every little thing that is in no way a problem. I'm glad they left and haven't been back. 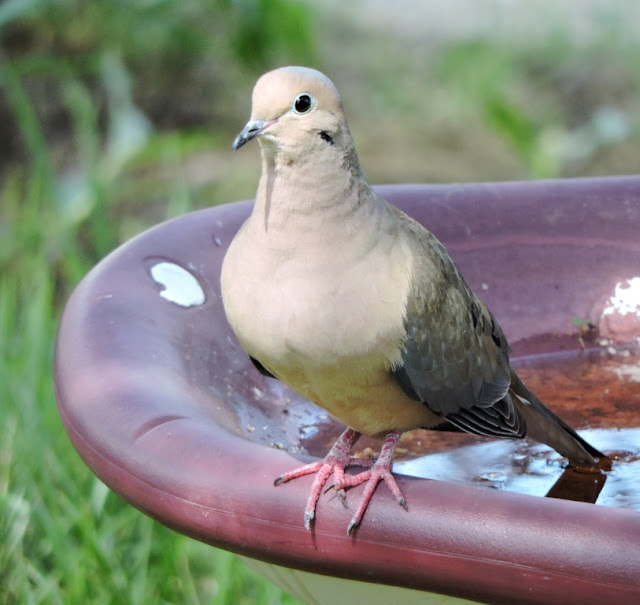 We have a pair of doves (Norma and Oswald, hehehe) who frequently watch the feeding frenzy from the electrical wires. Sometimes one of them pops down to feast with the others on the seed that falls from the feeder. 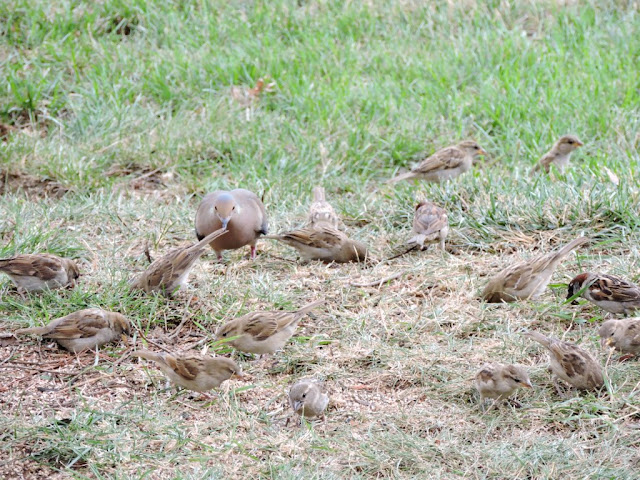 We've also had an elusive cardinal that my sister has, since the beginning of time, asserted was my grandpa's spirit animal. In the past several years I have been able to take this one's photo once. He always makes haste to his tree when he sees the camera (I'm not even really kidding). Tonight he was very preoccupied with something or other on the ground, so I was able to snap a blurry shot. 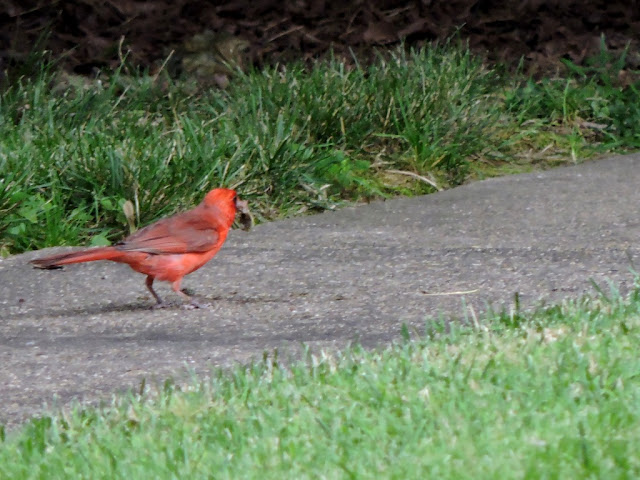 As luck would have it, I got into position to take some really good shots and my dog decided to bark as though the redcoats were about and we needed to be warned, and this one zipped off. But a few moments later, what I've been trying to snap for weeks came by. 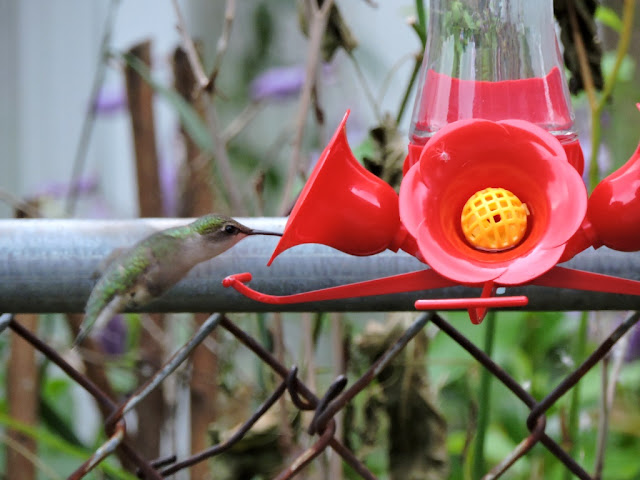 My mom ordered this hummingbird feeder after hearing how well they work for my uncle. And they do. It wasn't but a few days before she had a few hits. There are about three different little ones who show up to take a sip. I never have my camera on hand (I run to get it but they disappear and don't return, as though they're in cahoots with the cardinal), but tonight I ran to get it and had a bit of luck. 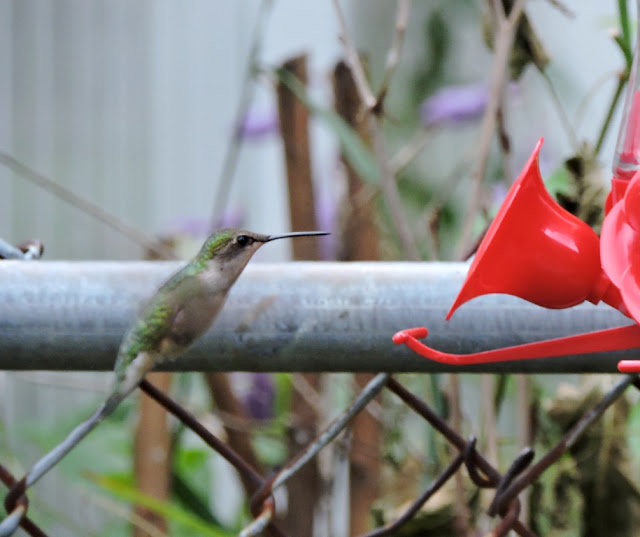 This is Calliope. Her little black and white friend is Felicity, who I think is even tinier and more elusive (my summer goal is to get her photo--dream big, guys, amiright?). It's been quite hot and humid here, so they come out to eat later in the evening (unlike the other gluttons who feast sun up to sun down). 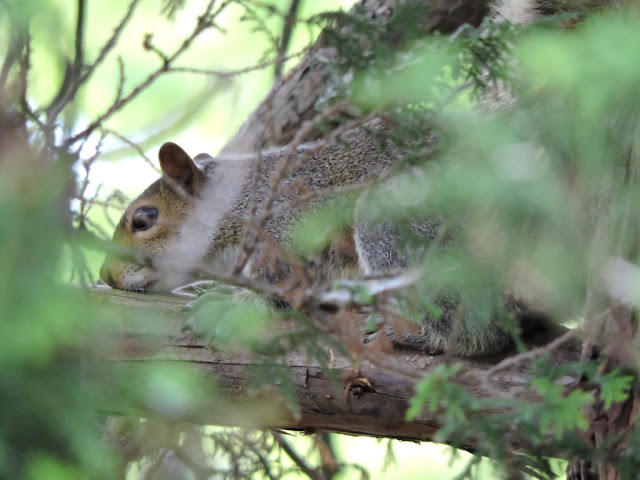 And this is Elmer. This is Charlie's nemesis. Elmer creeps down the tree, one wee step at a time, pausing and looking around, waiting for it. We sit there and watch him, rooting for him. And then he gets gutsy, makes too much noise, and Charlie launches off the porch, chasing him back up the tree. A few minutes later you see Elmer creeping down the other side of the tree, occasionally peeking around. And then lather, rinse, repeat.

Tonight A-train asked me "What do you think those birds are saying to each other?" I didn't tell him they're probably talking about us idiots staring at them all the time, wondering why we don't have anything better to do.
From the convoluted brain of Bethany at 10:48 PM