I didn't realize it's been a week since I've posted! I thought I was being better about that, but I guess not... I've almost got my quilt top finished, so it won't be long until I spend way too much time crawling around on my living floor and cursing myself for making a large quilt (a process more commonly known as 'pin basting'). I was seriously pondering sending this one off to be quilted, but I thought for such a personally-themed quilt it just wouldn't be right to have someone else do that part, even if my best quilting consists of a lot of straight lines instead of fancy loops and whorls and whatnot.

Don't worry. Only a few more posts until I stop pestering you with the weird way by brain "matches" fabric :) 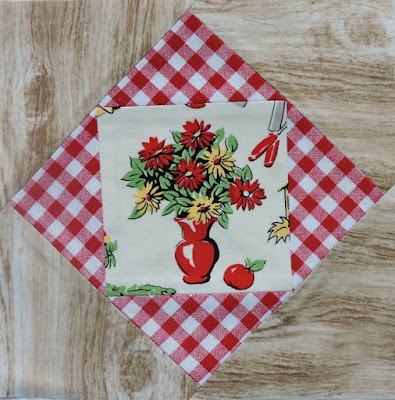 This one made me think of a passage from one of the 'Little House' books (if I wasn't so tired I'd dig through the books to find out which one). But Ma always had a red checked cloth on her wooden table, and would put wildflowers that the girls brought her in a jug in the center because she 'liked her table to look pretty.' I do feel the same way. There's just something about a jar/vase/pitcher of flowers in the center of a table... 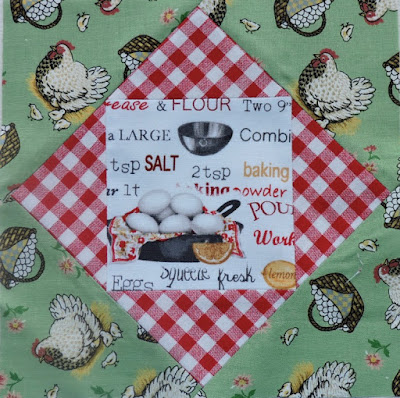 This one is my 'from farm to table' block. I remember the first time I had farm-fresh eggs. It was only a few years ago. A co-worker has a horse farm, and also raises chickens. He brought me in some eggs. I had the afternoon off so I made scrambled eggs for lunch. I sat there making all kinds of "Mmmmm-mmmmmmmm!" noises, driving my father insane. But seriously? They were that good. I pride myself on my quiet eating (food noises in others bothers me--it's a real thing. It's called 'misophonia,' so you know these were good if I risked bothering myself). 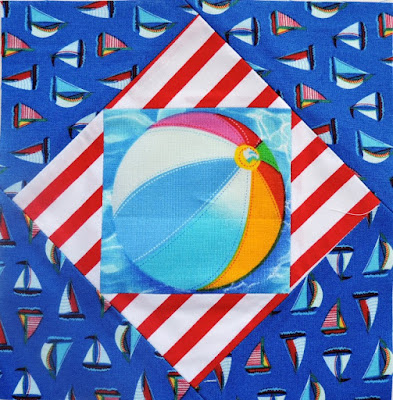 Don't you love how I manage to face my fabrics in the wrong direction? Way too late in the game I realized why, but I'll tell you what--I don't care. Everything about this is so typical of me that it just belongs, and I think I'd be disappointed if each block turned out perfect. This one is reminiscent of the beach--striped umbrellas, beach toys, and sailboats gliding by under the sun. 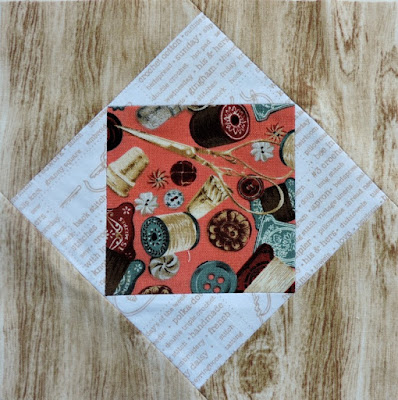 I had run out of ideas for blocks, so my mother sat and gave me fresh eyes on it. I had completely forgotten about that center fabric until she pulled it from the stack. The first thing I thought was "Ooo, Grandma's sewing box!" I actually wrote a post about that little treasure.

Well, I'm off to bed. I had a long day, and a bit of a stressful one, and the news is just so depressing tonight (when are we going to just stop killing each other??). So with that I'll bid you ta for now, and see you soon!
From the convoluted brain of Bethany at 10:42 PM