Bad Pictures of a Table Runner with Good Quilting

Remember way back when we thought the days were so long? I miss those days. Not summer, but youth, I suppose, when even the short stretch between after-school and dinner seemed like a very long time. Now I feel as though a calendar serves me better than a clock as time truly flies and the latter doesn't seem up to the task of keeping up with it. That's all just a very fancy way of saying "Can you believe it's February already?"

January has flown by, and I am still working on the same dishcloths and sock yarn hat--no matter how quickly I knit, I feel like there's an impish little gremlin who unknits my stitches when I take a sip of tea. Our snow is already gone, it's going to be sixty degrees tomorrow (!!!) and there are only four episodes of Downton Abbey left forever and ever. I'm not dealing well with any of this.

Anyway, last week I whipped up a quick table runner for the dining room. My stash is quite low right now and would lend itself fabulously to a decent scrappy quilt (so I could then buy more fabric without any guilt), but I did have a few pieces that were just the right size for this. It's just a wholecloth quilt, nothing fancy at all. Sorry for the picture quality--I don't think I'll ever take good pictures in low light. 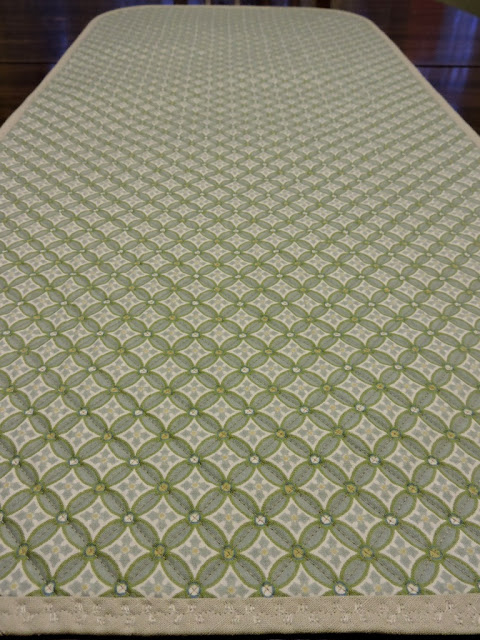 I'm kind of overly pleased with myself as I eyeballed all of that quilting. I used the little dotty centers as my reference (they were only an inch apart, but that's plenty of room to go crooked--trust me, haha), and everything came out straighter than the lines I tried indenting with my hera marker. Go figure. 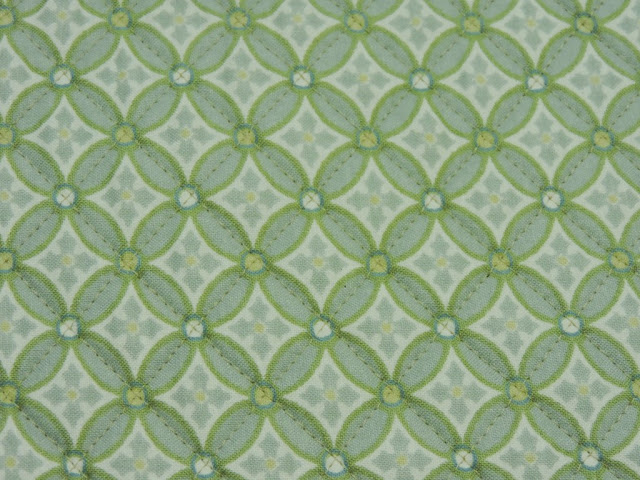 When I started this, all I could see were the little green ovals that made up the mini cathedral windows. When I quilted it, all I could then see were the white centers, and it looked very tufted. I thought it might have something to do with the straight line quilting having an illusory effect on the curves. I thought "Wow, I can't wait to take a picture of this!" and then when I did the effect was gone, and now all I can see are the green ovals again (and I don't mean in the photos, I mean in real life, as I'm looking at it right now as I type). 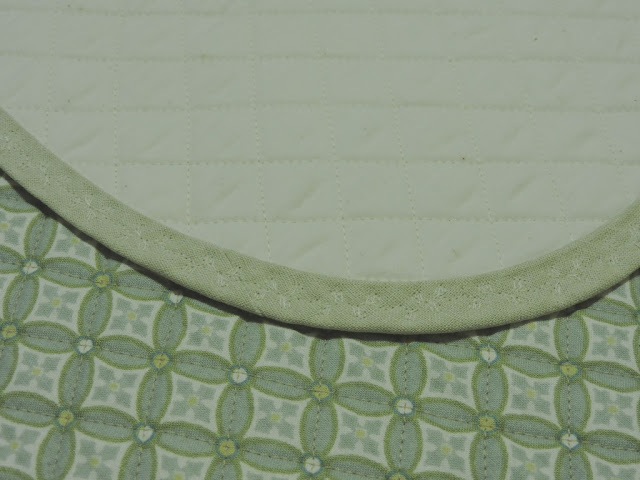 I made this for the dining room table, and as it's an oval shape I wanted to mimic that. I ended up having to go with a rounded rectangle, as geometry is not my strong suit and disaster was on the horizon. The curves do look much better than the harsh rectangular corners I usually do. It also saved a bit of time as I didn't have to stop and miter anything--it all went on so nice and smooth and stayed that way. I definitely want to try this on other quilts. 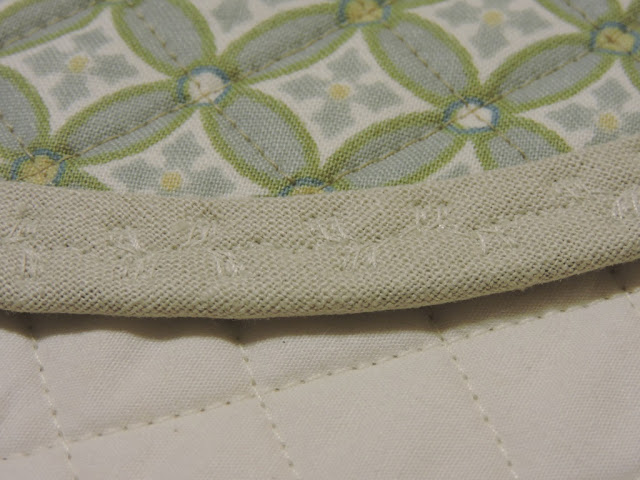 I didn't have enough batting, so I used a piece of sew-in fleece. It worked fine, but I'll just have to remember not to put this in the dryer. I used linen for the binding, and wanted to use one of my fancy stitches for it. I saw one that I thought went well with the fabric, but it came out looking like the above. At least it's consistent, so it doesn't look wrong, just like a weird stitch. Here's what it was supposed to look like (but not in red): 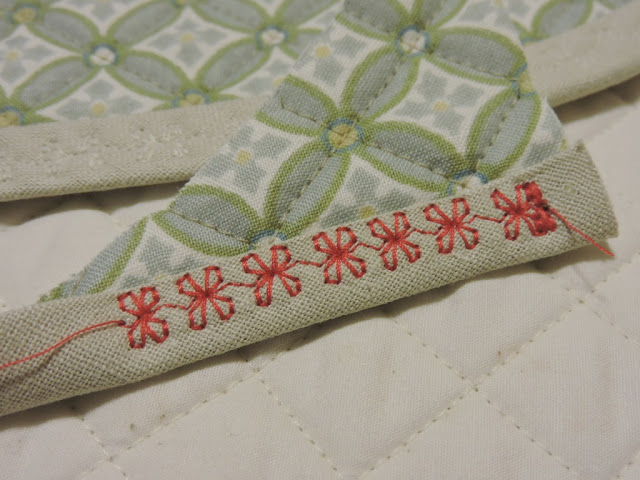 Wouldn't that have looked cute? I had a terrible feeling something was wrong with my machine and that I would have to lug that monster to the repair shop and pay heaven knows what to have it fixed. But apparently what I should have done is use the suggested presser foot. I used my walking foot, and I believe that combined with the slight roughness of linen made everything go a little haywire. When I used the recommended foot it came out just as it was supposed to. Lesson learned. At least I didn't have to pick out all of those stitches as it does look like I meant to do it. 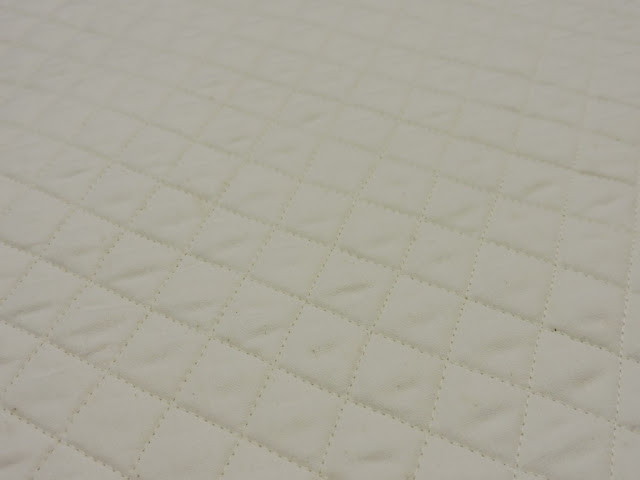 I am just super happy with my quilting. The stitch length was right, I didn't sew cross-eyed, and gridded quilting always gives this amazing texture that I love.

So that's it. Nothing much. It's been mostly spaghetti knitting (you know, the more you do the more you feel like you have to do, like eating a bowl of spaghetti) and my new time-sucker (it's not quite an obsession yet). When I can grab a few minutes of decent light I'll show you some pictures of my feeble attempts at this new interest.
From the convoluted brain of Bethany at 10:32 PM