I cannot believe it's been two whole weeks since I last visited with you here. It's been a...varied two weeks. Every early spring, I get hit by a few weeks of feeling low (a little sad, a little anxious, a little lethargic, all rolled into a bundle of fun for those around me). And just as I was feeling on the uptick, we received word of the untimely passing of my uncle. That, and a few other personal things, have caused the past two weeks to be a bit of a blur. And when I logged on today, I thought "Two weeks!!! Oh dear!!" 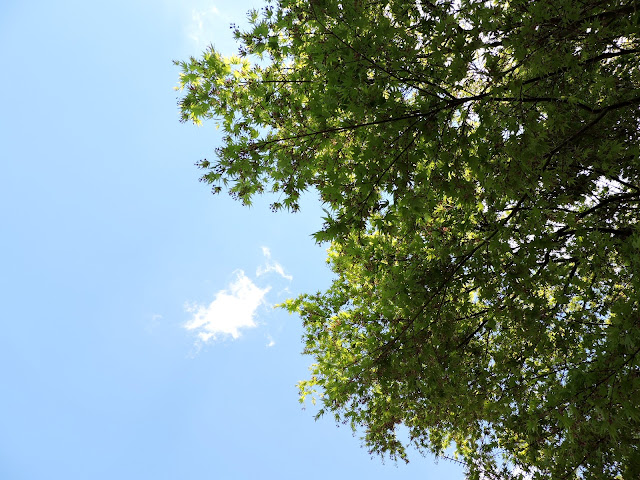 The weather has been varied--we've had cold days with rain, gray days with some unseasonable humidity, and a good healthy dose of blue skies and sunshine. Today was warm, and windy, and sunny. And Easter. The flowers are popping their heads out of the earth to see what's new, a certain little boy was searching for eggs (and called the Easter Bunny 'a clever guy'), and more carbohydrate-laden calories were ingested today than for the whole year thus far. 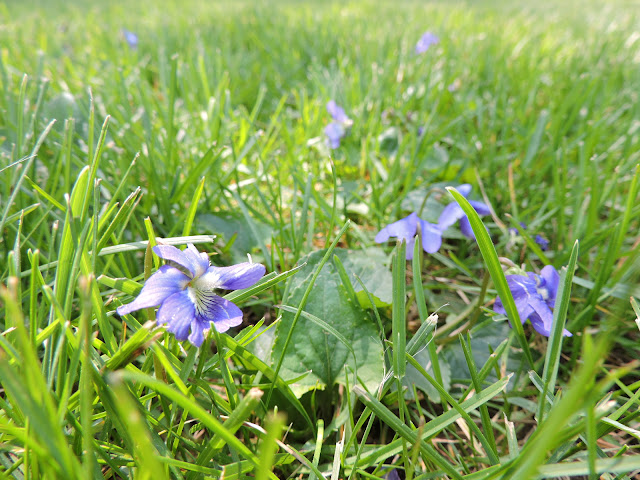 I don't remember what these are called, but they must have sprung up overnight as they were certainly not there yesterday. They look like mini pansies.

We hid some plastic eggs in the yard because Little Schmoo loves a good seek and find. Sometimes he would be practically nose-to-nose with it (if eggs had noses) and would say "Tell me if I'm hot or cold!" Of course, a few were easier than others. 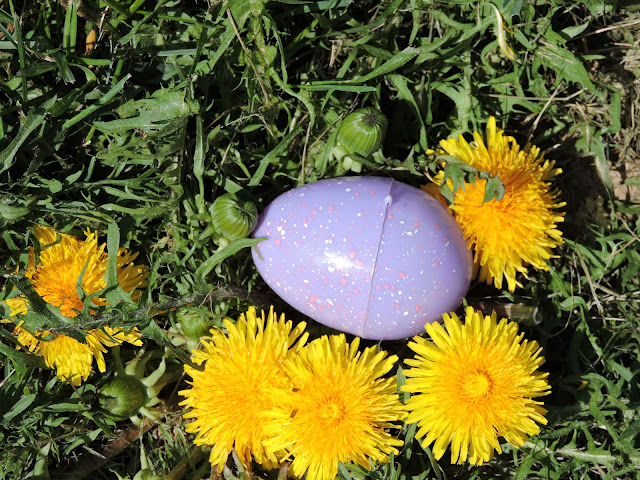 I caught this picture of that herald of spring, Mr. Robin Redbreast. 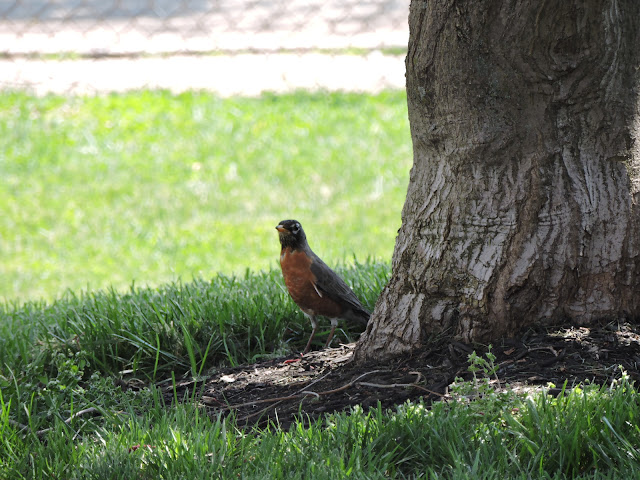 He responded as one of my sisters does when she sees a camera--he posed and seemed to say "Hey, take one of me!" 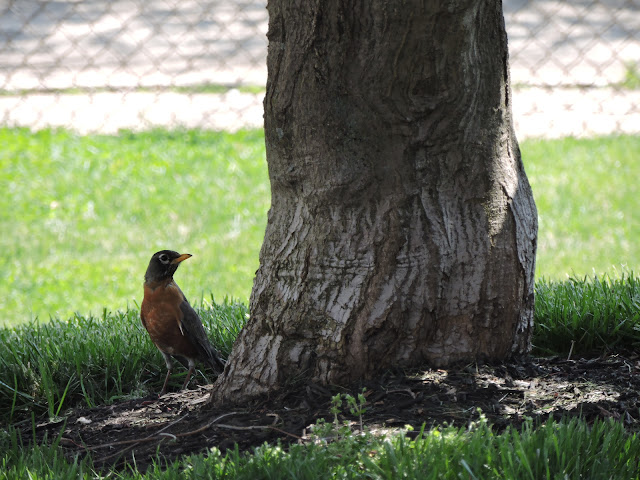 I've actually got several similar shots, but I won't bore you.

My father spent a significant amount of time this week giving the yard its first makeover of the season--edging, trimming, mowing, raking, and so on. It sits in stark contrast with our neighbor's yard (as it does most of the year), which is generally covered in weeds and overgrowth and a general atmosphere of Amazonia. However, if you look at just the right moment (and possibly tilt your head and squint), you see that it looks like a field of sunshine. 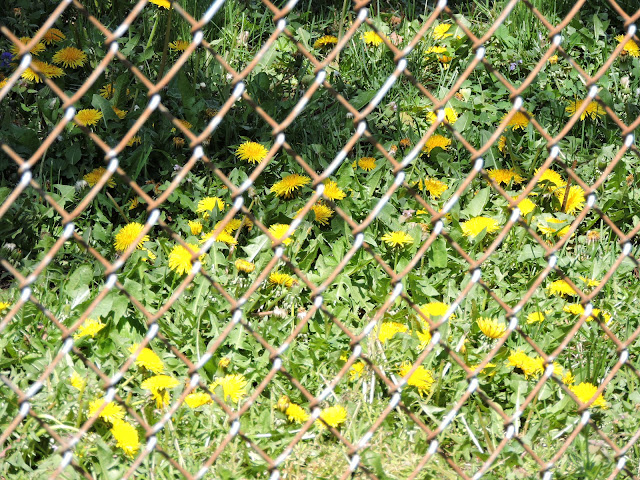 I wholeheartedly agree with Sister Monica Joan (of Call the Midwife) when she says "Weeds are flowers that are simply growing in the wrong place" (and then promptly transplants the pulled weeds into her garden). Which, speaking of that show, my mom and I are completely caught up (except for tonight's episode, which I recorded). I am so madly in love with this show. But if you've made it this far in this post I do have a question--seasons two through five opened with a Christmas special. I know there is one for this season wherein they all go to South Africa, but from what I can tell that episode has not aired here in the States. Does anyone have any insight to this? It's driving me bonkers to be missing this episode (and will drive me further so waiting for it to pop up on Netflix).

I haven't got much else for you, just a bit of a personal whirlwind for the last two weeks. Speaking to that, when my mind is...occupied, I find that I need to busy myself. I've cleaned and dusted and gone through my closet and drawers to bag up donations. I spent yesterday making Finnish pulla bread (yummy, though I might leave out the cardamom next time), and started a summer cardigan today. I went shopping, had lunch with my mom, polished my nails, went to church, and did the Easter thing with the family. This may very well be the three most productive days of my entire life. 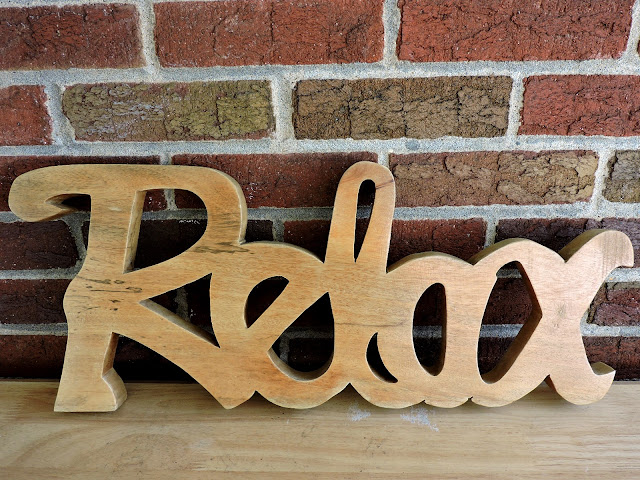 Work is going to be a welcome relief tomorrow (for about fifteen minutes).
From the convoluted brain of Bethany at 10:23 PM