Outside of the Box

Soooo there's a chance I might be a bit of an impulse shopper. Liiiiiike if something is in a really cute package but I'll never use the actual product? I'll probably buy it. If I get really excited about the idea of something but don't get much further than that? I'll throw money at it. Cute shoes that might not be comfortable? They're actually in my 'donate' bag right now. It's never anything overly extravagant as far as price is concerned, but as someone who feels angsty and overwhelmed amid too much stuff, having the stuff unused is worse than losing the money I spent on it (which, again, usually isn't much).

Case in point. Last year I signed up for a yarn subscription service (which didn't last long once I realized the error of my ways). They sent me a nice 'hello' gift, and then my first box. 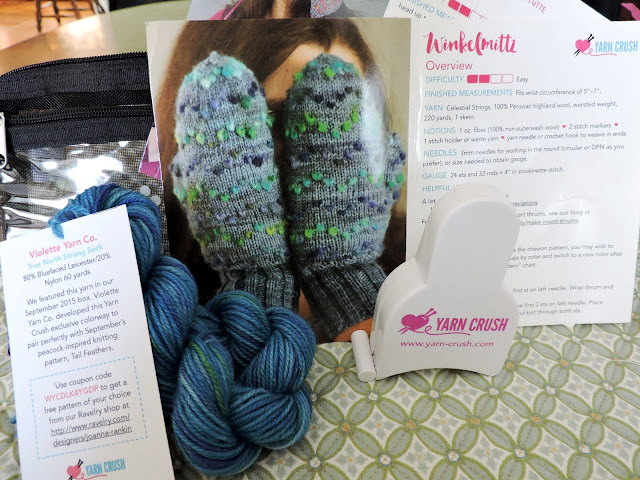 The gift was a small skein of yarn, a measuring tape that hooks onto itself that you can use to take your own measurements, a few patterns, and a fun little zippy pouch. 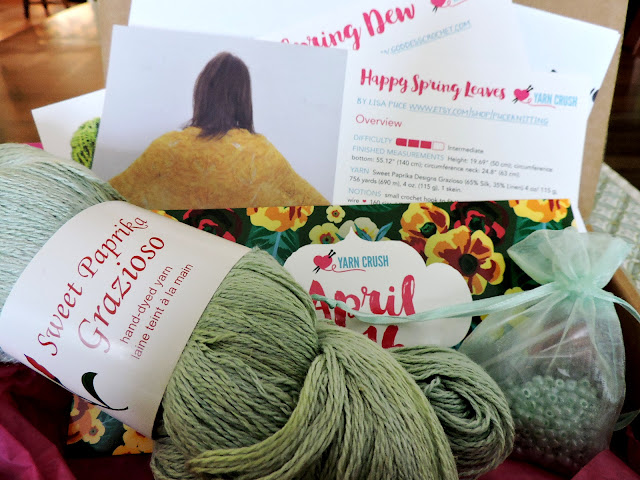 My first box was a couple of patterns and some yarn and beads. I actually gave this away a few months ago as the yarn is beautiful, but I knew I'd never get to it.

As time is wont to do, it flew by, and even though I signed up for every other month that time came too quickly, as did my second box. 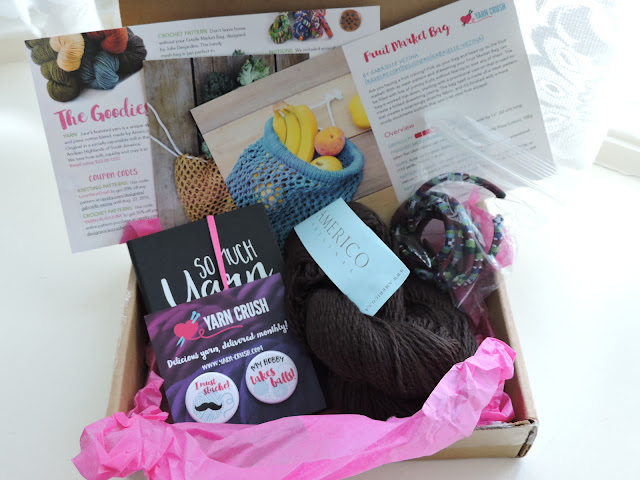 Along with some patterns and cute yarn-themed goodies, the project was for a produce bag in a nice cotton-alpaca blend. I used the cord for something else, the notebook is used for grocery lists, and the yarn is...somewhere. I didn't care for it as it has no memory, and I'll never use it as a produce bag. So I'm doing really good, right? Gave one away, and dispersed the contents of the other to 'somewhere.'

So I cancelled that subscription once I took hold of my senses. But then I got a tug on the heartstrings. Many of you may have heard of Amanda Bloom's Little Box of Crochet. It's a monthly subscription service that Amanda started with her teenage daughter Jenny. Way unfortunately, her daughter Jenny has been battling cancer for several years and is nearing the end of her fight. I didn't come across this until January, when Lucy of Attic24 announced she was the designer for February's box. So of course I signed up because if Lucy chose it you know it'll be full of color, and because from far away from the UK it felt like helping somehow. The box did not disappoint. 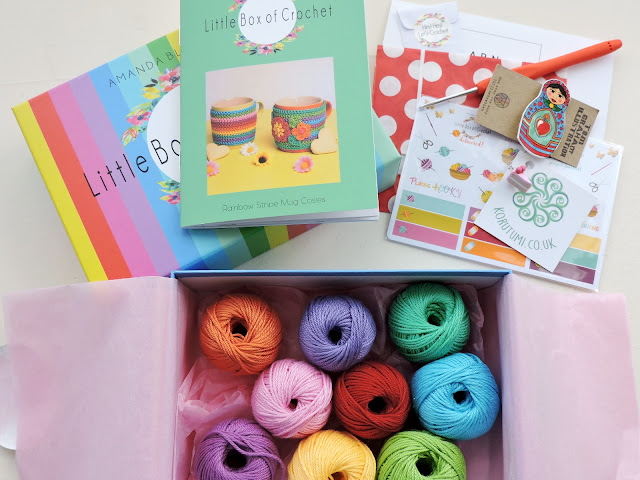 In addition to an adorable box and pattern booklet, there was a crochet hook, buttons, stickers, a stitch marker, a Russian doll pin, and a rainbow of yarn.

The suggested project was a mug cozy. I don't know that that's something I'd use. I have a fabulous knack for dripping coffee down the side of my mug before I've even taken a sip, and I didn't want to make something so cute just to gross it up. I had no ideas on what to make, so I asked A-train. He's so imaginative I thought he'd see something I couldn't right away. He told me I should make a blanket for "baby Henry" (my cousins' son). When I explained there wasn't enough yarn for a blanket he said "Just make a small one, then." So I am still undecided on this, although all I see is something to do with flowers.

I did get the second box, and then cancelled my subscription as I could sense that feeling of "Why do I keep buying these things when I already have too much yarn and too many projects?" 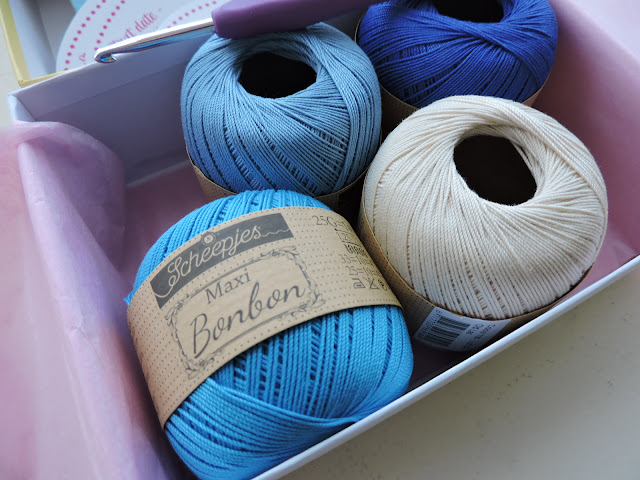 This one had some beautiful mercerized cotton and some other goodies.

The pattern for this box was supposed to be a crocheted lace scarf. I tried. I really did. I don't think I started fewer than ten times, but this just did not want to work. I do love the colors together, so I will definitely have to find a project for these.

So, that's that. Yep. Not another thing to report.....OK, I'm lying, one more. I KNOW! What is WRONG with me? This one was not a subscription, but for a crochet-along for a beautiful Scandinavian-inspired shawl. The Scheepjes yarn company hosts a CAL every year (I've used their yarns a few times now, and they are beautiful!), and while my primary instinct was to not take part, they introduced a new colorway that I gasped over, and bought right away. I don't have a picture of it in the box as I've pulled it all apart already, but here's an image from the info page: 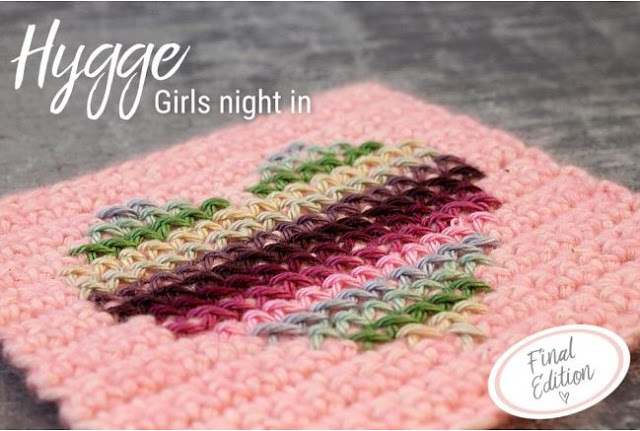 OK? Tell me that's not gorgeous!

Again, I tried. I gauge swatched and finally got going. Then I realized...I kind of wasn't liking it for me. It's beautiful in pictures, and I can immerse myself for a while in the Instagram photos, but guys? I have a lot of shawls that I don't wear as much as I should considering the time invested, and if I wasn't loving the feel of this one it didn't make sense to continue. So the small colored skeins (that make up the heart above) have been squirreled away for a floral project simmering in my brain. And the pink of the background is currently on my knitting needles as a warm-weather cardigan (it's cotton yarn). I had to very carefully search for a pattern, and I think I'll be able to squeak this one out. Eventually. Because the section I'm working on now feels like it will never end. It honestly feels like there's a gremlin unravelling as I stitch like the dickens because how can I not be further along yet?

However, I do not lack for shows to binge watch so I think I'll survive it. OH! Speaking of shows. First--I don't know how you all have waited for an entire week to pass by to watch Call the Midwife. I've only recently caught up to what's airing now, and it's torture to wait for Sunday night! BUT if you like shows with strong, smart women you might like The Bletchley Circle on Netflix. It seems to have only had a brief run, but the premise is interesting--a group of WWII code-breakers decide to put their skills to use to solve murders. I've enjoyed what little there is of it, so if you're not wanting something that lasts too long you might enjoy this.

OK, must trot. Because in addition to too much yarn, and always too much fabric (which I swear I'll be cutting and stitching again soon), I also have too many books, so I'm going to go make a dent in that pile.
From the convoluted brain of Bethany at 11:32 PM