My sewing hiatuses are more frequent and lengthy (except for some mending here and there). But sometimes I'm asked to make something on a deadline, and there's no sitting around with an "I'll get to it" attitude. And if it's a design I can really sink my teeth into, it reminds me all over again while I love taking needle to thread.

Every year around this time a friend of my sister runs a benefit in honor of her deceased mother (to see things I've made in previous years click here and here). Last weekend we went fabric shopping for anything I did not already have in my stash. I love going fabric shopping with my mom and sister as they both have a good eye for simple designs and colors, whereas I am much more obnoxious in my taste and that needs to be reined in at times. I love what Alicia came up with.

The design we settled  on is the fairly recently released Rollie Pollie Organizer by Sarah Gido at Cozy Nest Designs. There was a decent amount of cutting and fusing for this pattern (but if I had stopped and thought for two minutes read the directions fully I could have saved myself some time and work). So I did that the other night in the time between Jeopardy and Project Runway. Friday night and all day yesterday I worked on this pattern. It's not difficult, and is very well designed and the pattern very well written. But the first time you make something it generally takes longer. If/when I make this again I'll probably be able to do it in about half the time. 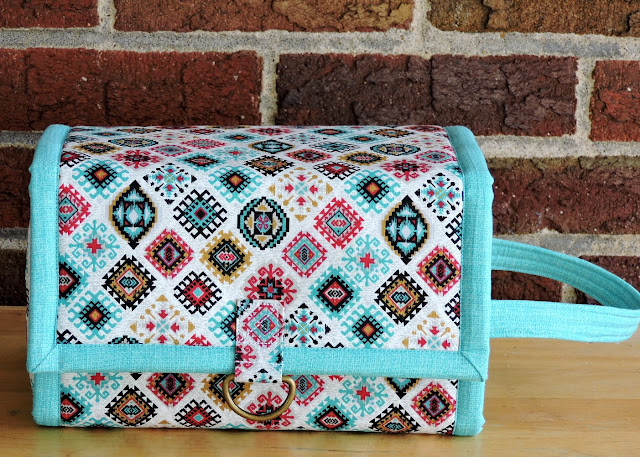 Isn't that fabric great? Another option was for a grommet hanger (instead of the d-ring) but I like the dangly aspect of the d-ring. 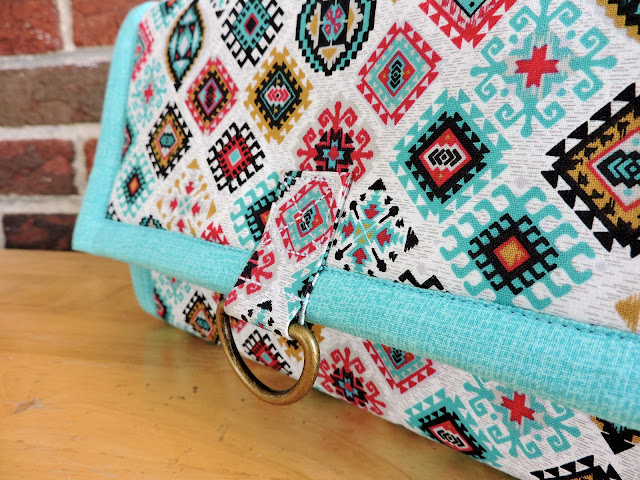 Looking at this side view, I'm realizing what a shoddy press job I did on those edges, so don't look too closely. I'll have to give it another go before my sister hands this over. But you get the general idea of what's supposed to be happening-- 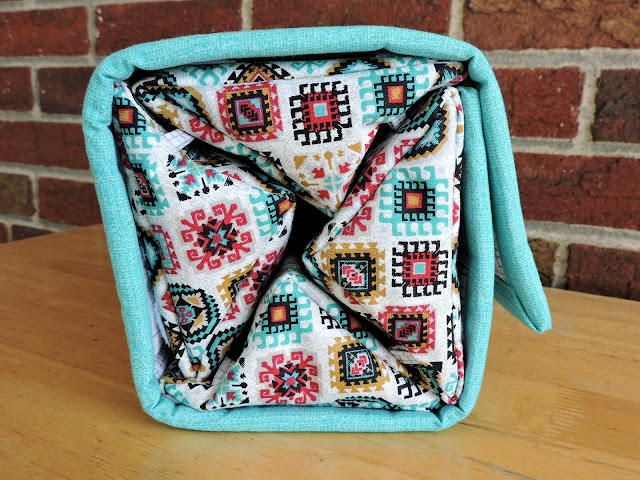 So what is this thing? Well, you give a tug to the hook-and-loop flap, and this opens up to a very nifty hanging organizer. 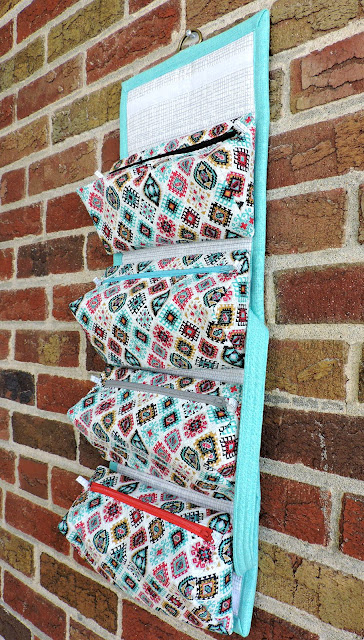 Due to my ridiculous tendency to hoard collect zippers I had several colors that worked well so that each pouch could be differentiated from the others. So this can hang up like this, with everything neatly contained, or you can remove the pouches through the magic of Velcro™. 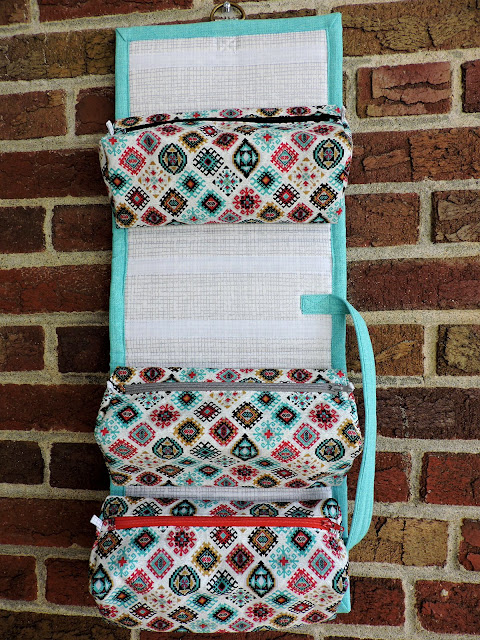 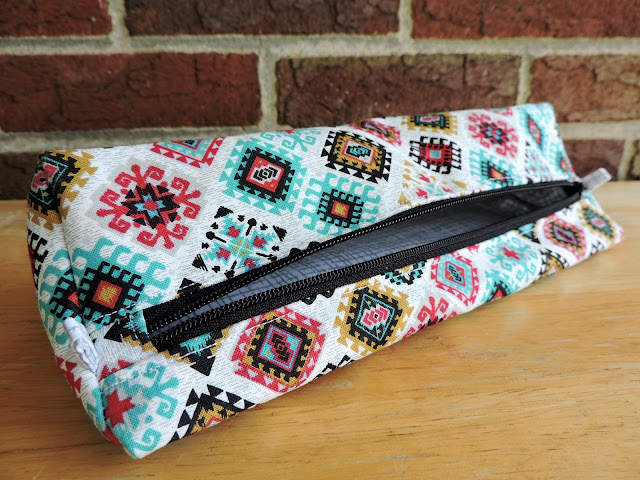 I've pattern-tested for Sarah a few times, and her designs are well thought-out (and dang near ingenious), and the patterns clear and well-written. I used my seam ripper once during this whole project (and that was due to a seam not behaving and nothing to do with the pattern). That was kind of disappointing--I just replaced my seam ripper and I wanted to see if I could break my own record for dulling the blade. 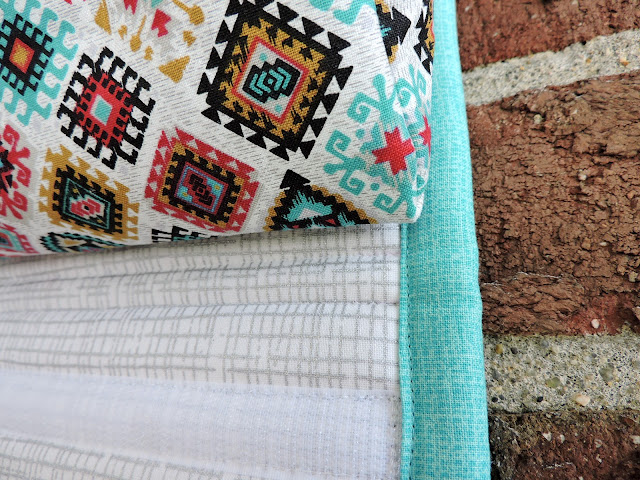 I haven't gone fabric shopping in quite some time as I've destashed almost everything, and haven't had a project for which I'd need to buy fabric. Joann's has certainly stepped up their game a bit. It looks like they're actually paying attention to what the big designers are doing and what people are getting excited about and trying to follow suit (of course this means the prices have inched up as well). For the first time in a long time I left there thinking "Oh my goodness, I need to come up with projects to make--I saw so many cute things!" instead of feeling pretty much dead opposite.

Anyway, this organizer could be used for almost anything--travel items, craft supplies, knitting/crochet gadgets and tools, and so on. It looks nice and neat hanging up, but folds up nice as well, and is of a good boxy shape for packing (with a sturdy handle for carrying). 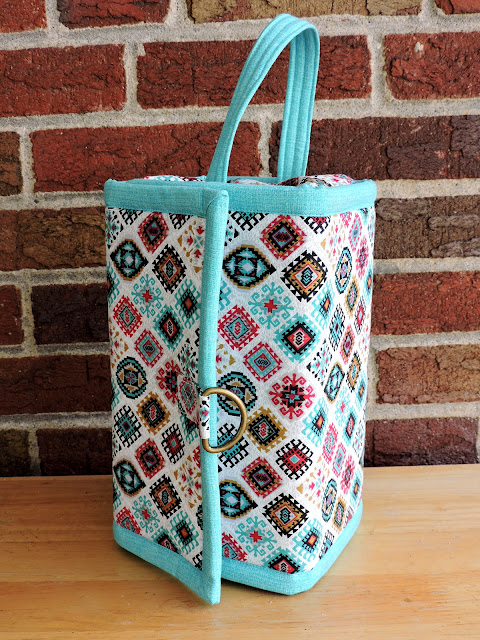 There is a lot of interfacing that goes into this to keep it sturdy and structured, and it uses more fabric than you'd think. But it also lends itself well to scrappy deliciousness. There are also three different sizes that can be made--I made the largest at about ten inches wide by about twenty-five inches tall when unfolded. I truly enjoyed making this project. Two things I would do different: I'd cut the binding strips a little thinner, and I'd play with Velcro™ placement a little bit so that it's more towards the edge of the flap instead of allowing it to stick out just a little bit (but that's just me being OCD about it, as this thing is wicked cute).

I've got a new bag for myself all set to be assembled--I'm only delaying this one as I haven't used most of the materials before and that makes me slightly nervous. I'm hoping it ends up looking as good as it does in my head.
From the convoluted brain of Bethany at 11:01 PM