Utotia in cork (and some advice if you want it...)

You folks know I've had an almost decade long love affair with u-handbag, right? It's where I've learned so many tips and tricks and has been a place for sourcing a lot of fun hardware and frames. Much to my immense chagrin, they are closing up shop at the end of October. I went on a bit of a pattern splurge when I heard the news (and possibly a bit of an all-the-other-things splurge, as well). One of the things I bought was an everything-but-the-fabric kit for their Utotia bag. (UPDATE: THEY HAVE JUST ANNOUNCED THEY ARE NOT CLOSING UP SHOP, BUT DUE TO CUSTOMER BEGGING WILL CONTINUE TO RUN AS NORMAL BUT UNDER A NEW MANAGER--YIPPEEEEEE!!!!!).

(Brief tangent): A while ago I made this wallet. My first idea was to make it out of that cork fabric you're seeing everywhere now, but had too difficult of a time matching up a binding and so on. So I held onto the cork fabric (with no idea what I was going to do with it as it wasn't very big of a cut). I bought the aforementioned kit (back to the main story now), but couldn't find fabric I loved. Then, in the shower (literally--does anyone else get great ideas in there?) I thought "Dummy! Use the cork for the tote!" Two problems solved at once. The cork was just a teeeeeeny bit too small for the pattern recommendations, but it's such a simple design I made the adjustments in my sleep.

This bag has a fair bit of things I've never used/done before, and you lucky folks get to read all about them (I can practically see you all chair dancing in excitement).

First off, my new bag (the smaller of the two sizes): 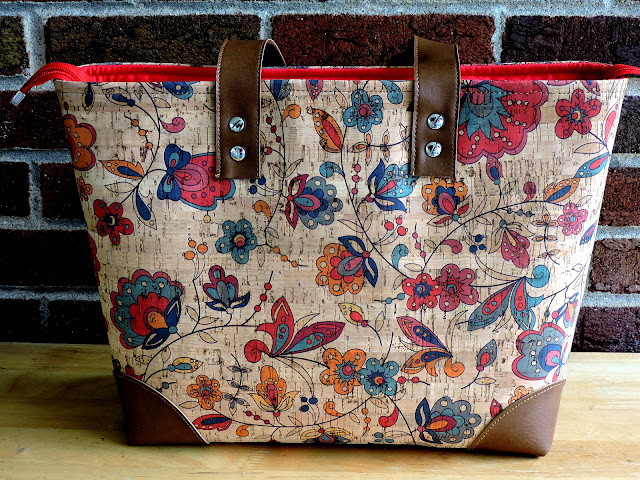 I wish you could feel the cork. It feels so supple and luxurious. I'm hoping I don't find out, but I'm pretty sure it could be wiped clean. A-train thought I drew those flowers on the fabric and was impressed (I came clean--I told him Aunt Leesh probably could, but not Aunt Bee). The corners were pre-cut pleather pieces. I think I've sewn with pleather once, but never cork, so I had a touch of nervousness doing it. Though not inexpensive, it still is only fabric, so I just took my time and went for it. 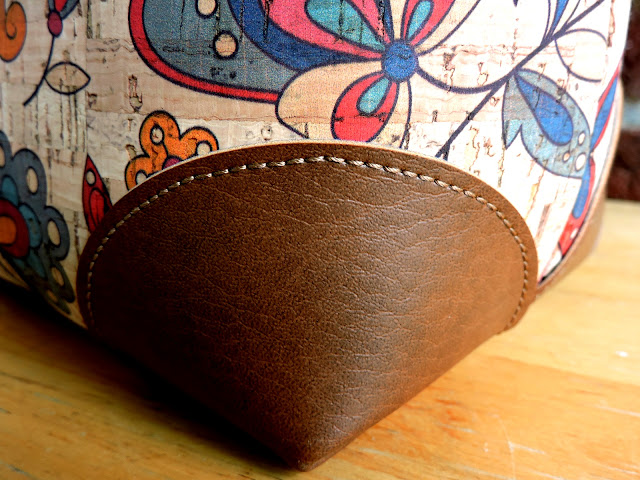 There are only a few places (on the underside) where I hiccupped the stitching, but you can only see it if you turn the bag upside down (and who would do that, really?). Boxing the corners was not the most fun I've ever had, and it's not perfect in the alignment of things, but only my fellow members of Club OCD and I would notice anything amiss. 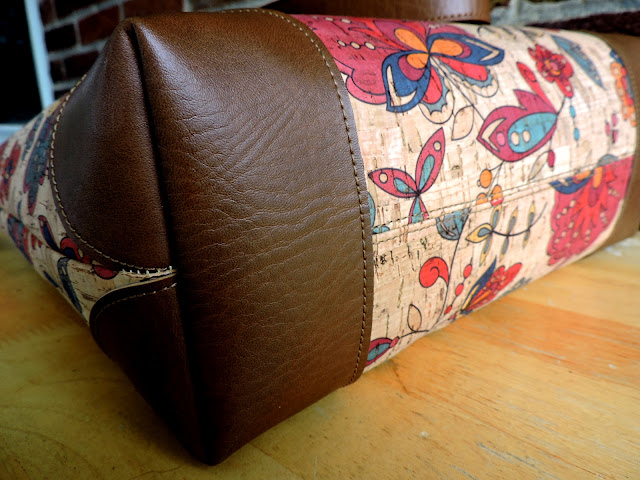 I am quite sold on the sheer fun of top-stitching on these kinds of fabrics though. Simple stitching surely stands out when using a thicker thread. 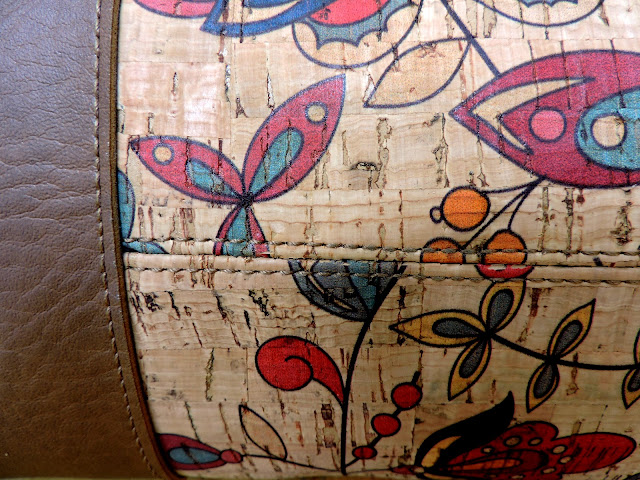 The lining. It's quite standard fare. I had started off with a different fabric entirely. My sister walked by a few times and looked at it. Then she came back and said "I'm sorry, is that what you're using? I don't think I can let you." I wasn't entirely certain myself, as it was looking quite different than when I had bought it, so I was glad for her input. I did have to trot back out to the fabric store, but I'm happier with the result (even if it's not ideal--whyyyyy do they never have the perfect fabric you've dreamed up in your head?). It was not easy finding a good match as the exterior is a bit muted, but I am of the firm belief that a pop of red never hurt anything, so I went with a solid. 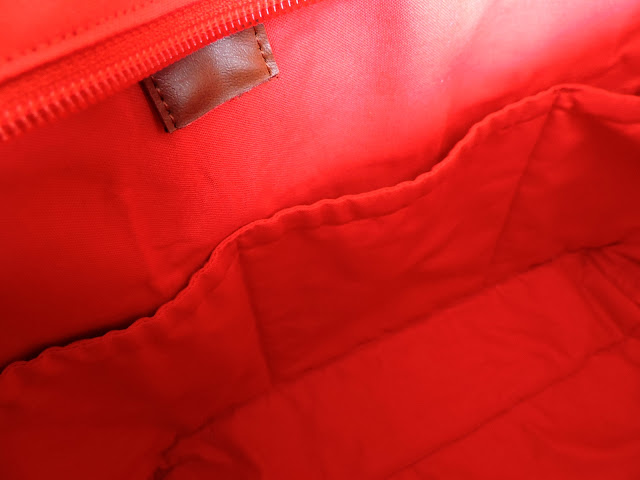 Years ago I started putting elastic in the tops of the pockets for bags I made for friends, but never myself (I frequently sell myself short when I make things for me as 'I don't care'--I would like to state retroactively that I do care, as just that little bit of security at the top is so much nicer than plain fabric that tends to flop). The pattern called for a padded tablet pocket on the other side, but I went for a standard zip pocket instead. 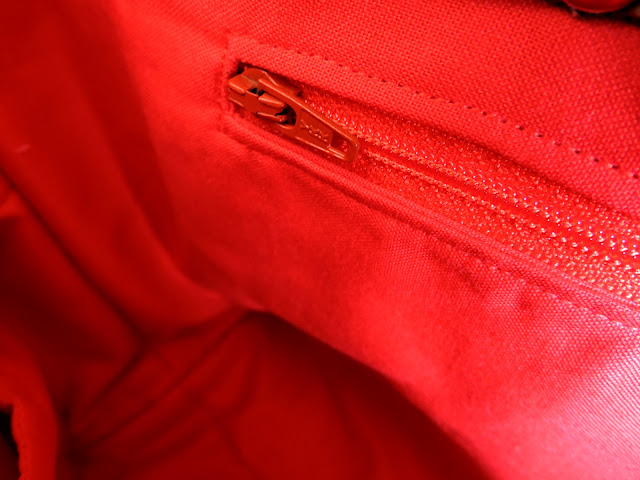 The zipper is your basic suspension bridge installation. 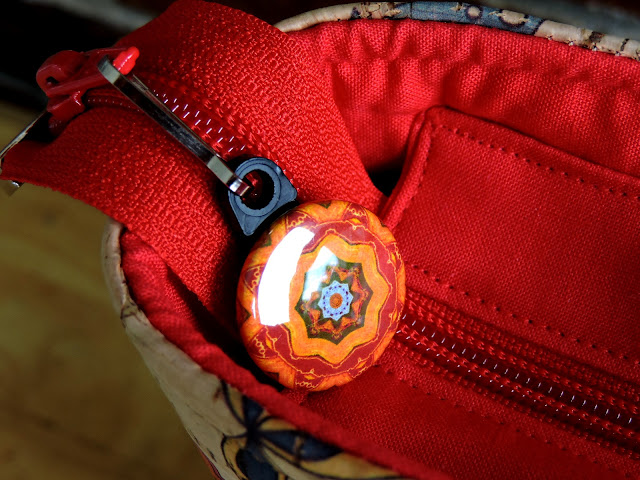 I had bought some zippers from an etsy shop, and they included this pull with my purchase. It seemed to match the bag, so I popped it on (I usually use a piece of ribbon or sew a fabric loop). Instead of fabric tabs I used some fancy shiny hardware on the ends of the zippers. I haven't used the bag yet so I haven't road tested them to know if I like them or if they're secure enough, but I do like the way they look. 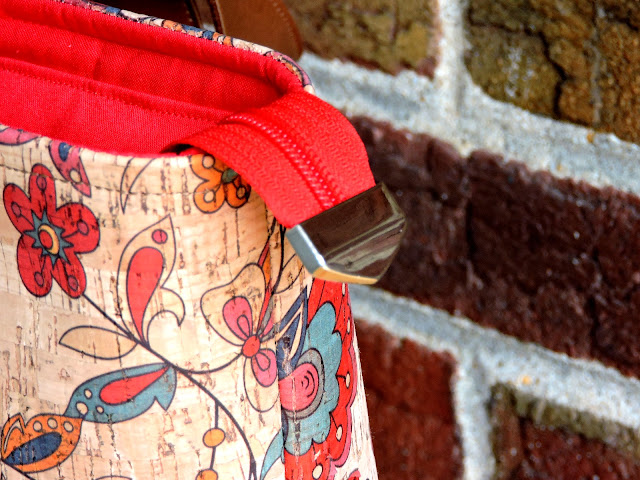 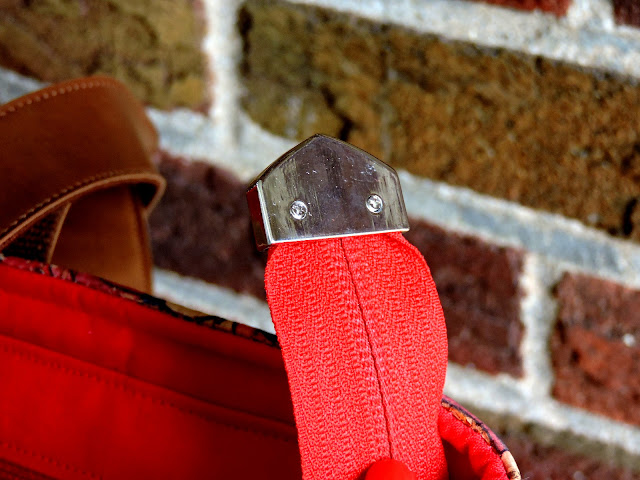 The straps are plain pleather affairs with matching webbing sewn to the wrong side. They are attached with something called Chicago screws--they serve the same function and have a similar look as rivets, but no hammering is required. 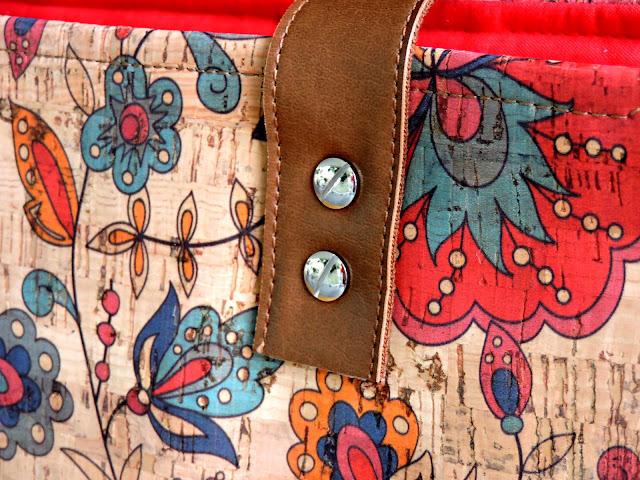 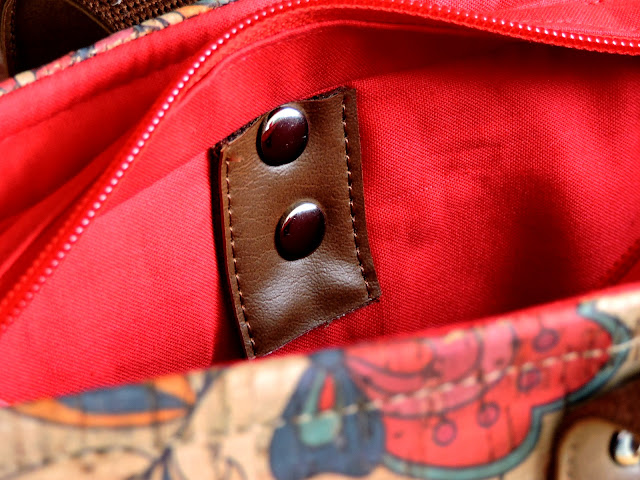 This was the single most difficult part of the bag. It was easy enough to mark the spots and use an awl to create the holes. It was much more difficult, with all the interfacing and layers, to make that hole large enough for the screw to go through and secure the strap. The first one had me cursing and so tense my shoulders were up around my ears. By the time I got to the last one I had my method figured out and everything was much simpler. And let me tell you--when you feel the threaded end of the screw catch and things coming together, it is beyond satisfying. 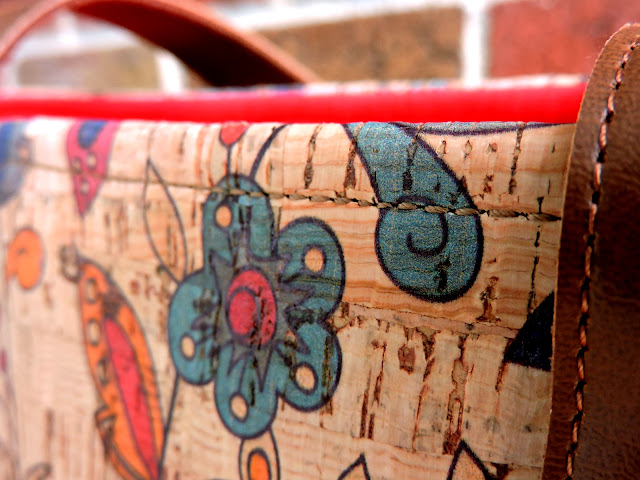 I wanted the stitching to stand out so I used top-stitching thread (regular thread in the bobbin). I love it. I thought "Why haven't I done this before?" When I was cleaning up afterwards and tidying my mess of a thread bucket, I found several spools (unused) of top-stitch thread, so clearly I've had several intentions of using the stuff, but just haven't.

OK, if you're still here, here are the things I've never/rarely done and some (hopefully) helpful tips.


One final bit here--on interfacing. Interfacing is so insanely necessary for adding strength and structure to your bags. It gives them body and shape, and really helps them last so much longer than they would without it. I did not use interfacing on the cork, but I used woven fusible on the lining (if I was using regular fabric for the exterior I'd have used it there instead). I waffled on if I wanted to use the provided Flex-foam interfacing as the cork was quite stiff, but in the end decided to. I'm so glad I did--it's so lightweight but really gives this bag a scrumptious feel. It's not cheap, and it's off a narrow bolt, but for certain bags it really makes all the difference. Here's what it looks like-- 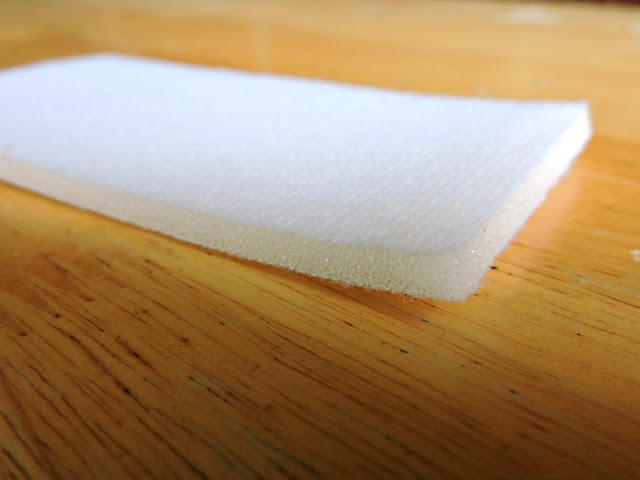 It's a thin layer of airy foam sandwiched between two layers of thin fabric. It comes in sew-in, and one and two-sided fusible. I prefer the sew-in variety--I find I get some bubbling with the fusibles, and this stuff is very satisfying to cut so I don't mind trimming it from the seam allowances (very nerdy, I know). It gives a lot of body of structure to a bag, but also a nice level of squish.

My other go-to is fusible fleece, which looks like this: 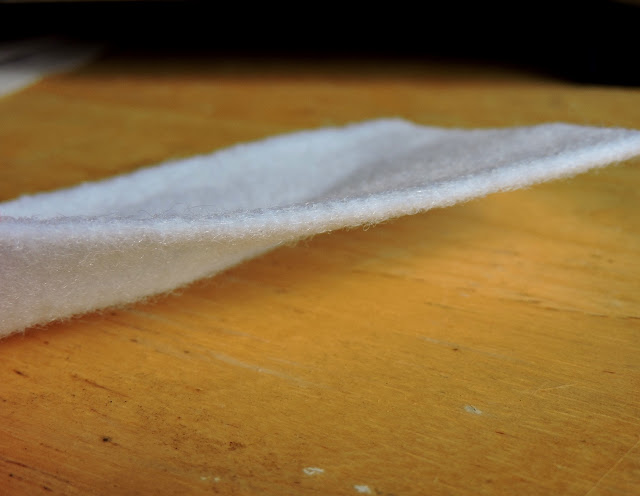 While thinner and more flexible, it's much denser and can be a little more bulky to sew through. While providing nice body and squish, it doesn't provide a ton of structure. So while these are my two favorite interfacings (three if you count the woven fusible), the choice really depends on the kind of bag you want--more or less structured, basically, as they both add body.

Modifications I might make: normally I'd like a bit of a longer strap, but I was limited as this is what came in the kit. I'd use purse feet on the bottom, which would work nicely with a rigid bag bottom. I'm not sure if the bottom will sag at all, so I might cover some plastic in the remaining lining fabric and stick it in the bottom of the bag for more support.

Whew. If you're still here, hopefully some of this was helpful to you. This was the last of the sewing projects I had lined up for myself, but then I got an order for five change purses. I've got everything cut and fused and ready to sew, so I might as well sew these while my nail polish is already destroyed (my nails never get out alive when it comes to frame purses). Look at me, sewing bags again, just like the good old days.
From the convoluted brain of Bethany at 10:43 PM