Hat for Little Nephew Based on His Favorite Video Game

In my stash, I had a ball of practically-neon green yarn that I didn't use for a project and had no idea what I would ever use it for until Little Nephew (A-train) was talking about his favorite video game Minecraft. The color reminded me of those creeper thingees that lurk around (I know less about this game than I do about rugby), so I thought I'd put those onto a hat. I couldn't find a pattern for exactly what I wanted, but I did find this one for the colorwork part (which is really all I needed).

I like the look and feel of a double-thick brim so I started off making that (using the same method I described in Big Nephew's hat), and then incorporated the pattern chart a couple rows into the stockinette section. I reeeeeaallllly like how it turned out. 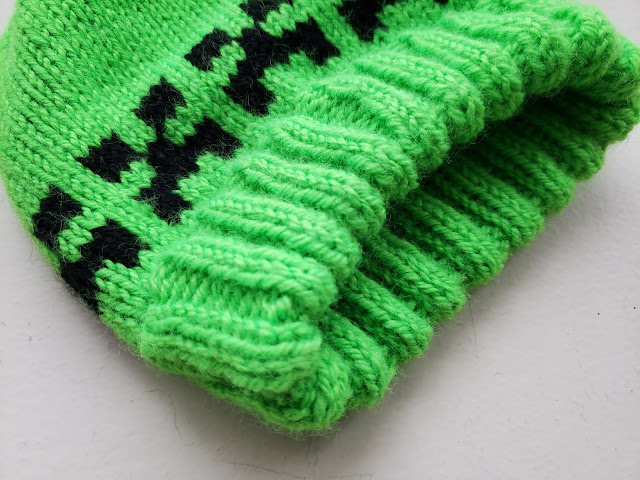 There were only a few sections of long floats to trap, and it's only a nine row chart, so this section went quite quickly (and on 16-inch circulars it was easy to keep the colorwork at a good tension). 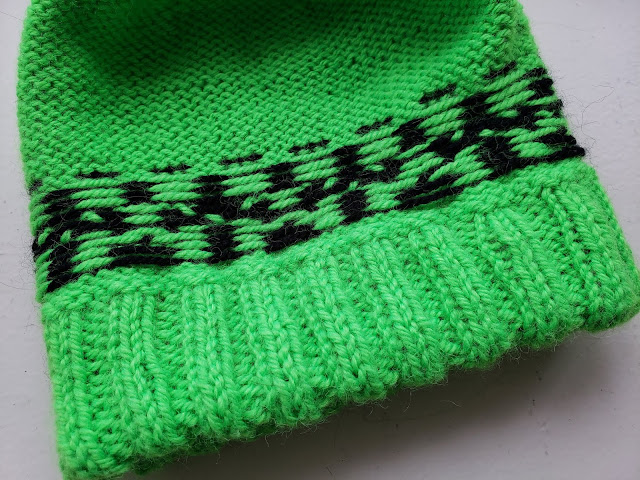 I did not like the look of the decreases in the pattern online, so I knitted even to where it looked right, and then just did some evenly spaced decreases. 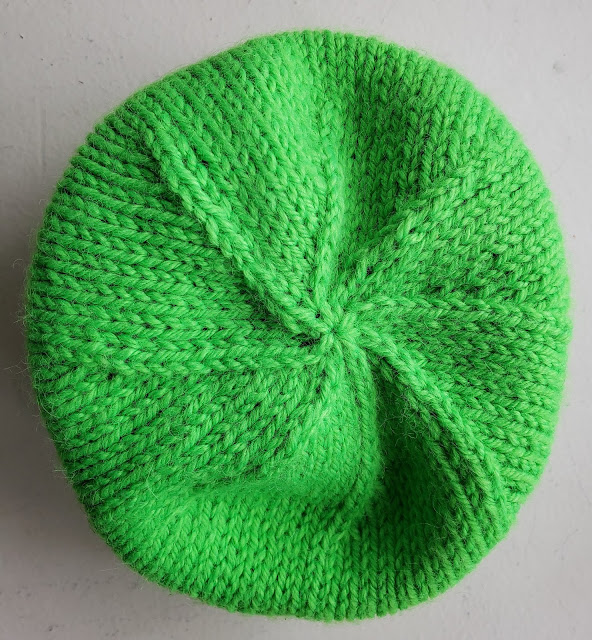 And here's the whole hat-- 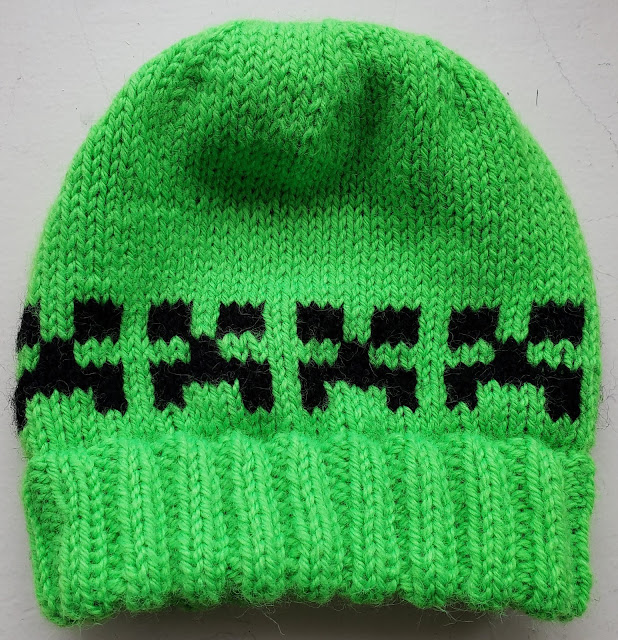 He looooooooved his new hat, and said to me last week (in such a sincere manner I felt it in my heart...but everything he says is so sincere) "Aunt Bee, let me tell you. I would not be making it through this cold weather without this hat. It's nice and warm and fits perfect" (we had a wicked cold snap last week).

Following up on this, I got a phone call one night. "Aunt Bee. Could you please make me....gloves with the tops cut off...and this little flippy thing to make them mittens? And can you make them so they kind of match my hat?"

I found a simple enough pattern on Ravelry to base these on (I made my wrist ribbing longer instead of using stockinette, and didn't do the finishing work she did). I didn't think I had enough green left to get both mitts, so I went with black yarn (for these, what he further described as, "ninja mittens"). Oy. Let me tell you. I rarely (as in almost never until now) work with black yarn for anything beyond straight knitting for the same reason I hate sewing with black fabric--it's really tough on the ol' peepers. What should have been a few evenings of work took a good bit longer because working with black yarn in lower light is rough (at least for me). Plus I have this perfectionist streak in me so I frogged some and thought way too long on some parts. But, they ended up just how I hoped they would.

So here they are in what is apparently ninja form-- 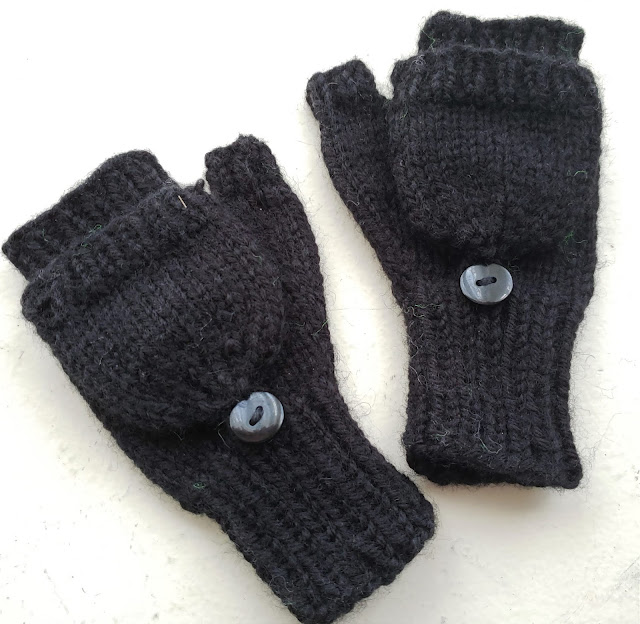 And here is one converted for comparison-- 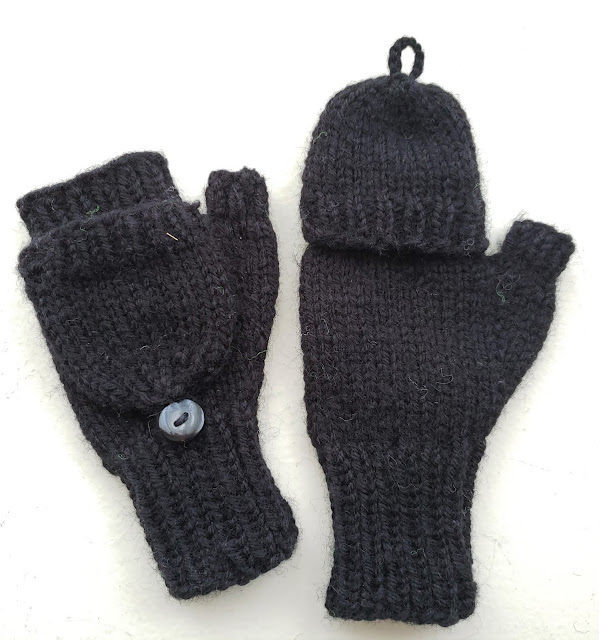 I needed to incorporate the little creeper guy from the hat somehow, so I duplicate stitched one onto the back of the mitten, so when you unbutton the flip top he appears-- 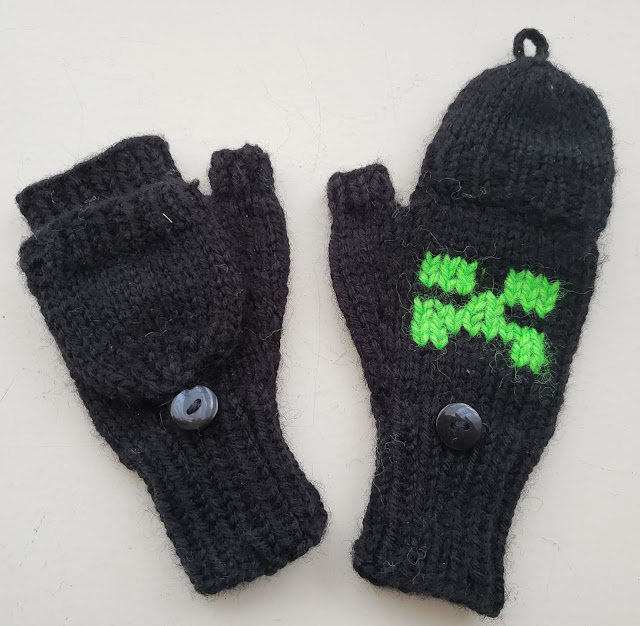 As this was my first time making these there was definitely a learning curve here, and a few things I might change up (I'd make the ribbing at the top of the mitts longer, and make the flip top a row or two longer as well). But I'm largely pleased with them, and more importantly, A-train loved them. He said, as he gave me a hug, "You deserve this hug, Aunt Bee." I am fine with this as a payment method.
From the convoluted brain of Bethany at 11:52 AM