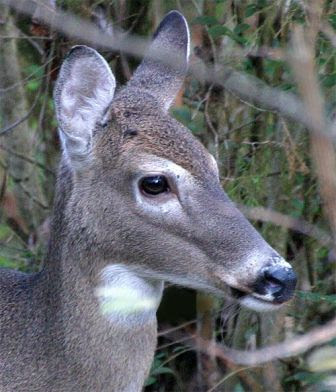 NOT my photo--I didn't have my camera on me.  Thanks Google Images.
My day was made today before it even really started.  I was running a bit late for work this morning, and I was really tired (fabulous late night chat with one of my oldest friends).  I was driving onto my work campus (I find it amusing when businesses have campuses), and a deer darted in front of my car. I hit the brakes, and then two more followed behind the first.  I watched them run across the expanse of grass in front of the building and thought that was it. Out of the corner of my eye I saw one more, so I looked left and I saw all of these beautiful deer faces watching me and my car.  There must have been about a half dozen.  I drove by really slow, watching them as they stared at me.  They didn't move.  I started to drive faster (I was late after all), and they all just darted across the lawn.  I stopped again and just watched them go, saying a little prayer that they'd be safe (my company is situated very close to a crazy twelve-lane highway with a lot of wooded areas nearby).  I pulled into my spot with a silly grin on my face and felt really lucky that I got to see such a simple thing of beauty.  As I was walking towards the building I saw three more taking off after the others--they must have needed to work up the moxie to leave the woods.  Some woman was coming out of the building and looking at me being kind of silly--she was head down, bundled up, hurrying towards her car (it was about 10 degrees this morning), so she must have been floored as to why I was standing there smiling.  Normally I would have said "Hey, look, deer!" but I was selfish today...I kept that moment for myself.

In other news...I've been trying to perfect a certain kind of zipper technique for handbags (it's the kind that's in the green and red bag in my previous post), but I'm not totally chuffed with what I've done so far. I've used two different tutorials and both had their kinks.  The first one is really difficult to get the measurements right.  The other one I had to take apart the zipper. Yes, I had to defy zipper nature, remove the clamp and the zipper pull (while trying to keep the sharp pointy tool from puncturing my hand), and then do some sewing.  Then I had to put the zipper back together.  This. Was not fun.  And if my nephew had been over he'd have cleaned up on my cursing (I told him every time he heard me say a naughty word I'd pay him).  It looked ok, but I'm too lazy to do either of these techniques on a regular basis.  I decided to combine a few elements from a few different tutorials, and I think I'm ready to give it a shot doing this my own way.  We'll see... If it works out well I might do a tutorial on it.  That would be kind of neat, to post directions for something that others might look at.  I know I search for what others have done to make it easy on myself.  In this instance I feel there is no easy way to do this so maybe someone will like my technique and use it for their own work. 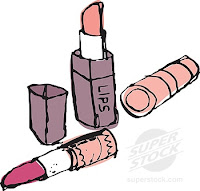 And--my lovely sisters have decided to put their talents to good use.  They've started a blog and a youtube channel on makeup and makeup application techniques for the everyday woman.  A lot of people seem to think that the more you pay for makeup the better it looks.  That is untrue.  It's the skill of how you use it that can make it look so great (i.e. a great sewist can make a not-so-great fabric into something beautiful--it's making do with what you have.  The same goes for cosmetics).  Their mission is to show the average person with an average income how to make themselves look fabulous without breaking the bank.  Their blog is called Face the Day Makeup (listed in my Pop On Over list on the right-hand side); the youtube channel is the Face the Day Makeup channel.  I got the sewing and yarn crafting genes, they got the makeup and hair genes.  And they're gooooood at it.  So much so that when I need fancier makeup I have to hire one of them--when I put on eyeliner it looks like a duck got ahold of a crayon.  I'm not kidding.  Anyway, give them a look-see.
I'm off to see if I can get past my zipper problem.  I won't be happy until I figure it out. I refuse to let something so silly get the best of me.  Later, taters.
From the convoluted brain of Bethany at 10:51 PM