I've sold quite a few bags lately, but one of the most frequent requests is for a zipper instead of a snap closure.  It'd be easy-peasy to just slap a zipper on there the way I would across the top of a change purse, but it wouldn't have the right look.  So I've been all over the web and the books in Barnes and Noble trying to find a way to install a recessed zipper (the kind that sits down from the top of the bag a little bit).  After reading a squillion-bajillion tutorials and sets of instructions I felt ready to tackle it.  I went reaaaaallllly sllloooow with everything--I tend to rush and it just leads to mistakes, so I forced myself to really think about what I was doing.  And things went well for a first attempt.  My measurements were a little off on the sides, but nothing that would affect the bag in any way.  I used some fabric I thought I wouldn't mind if I messed up on, but as I went along I was really hoping that it worked out well as I really do like it.  I was so into what I was doing that I had a party foul--I forgot to put the pockets on the inside.  She's got a nice squishy feel and the strap is comfy.  I popped her up for sale in the shop so we'll see. 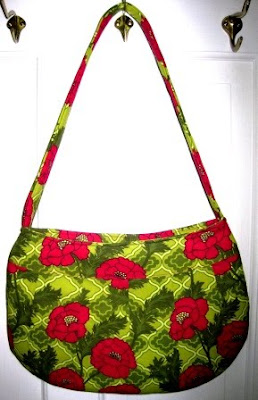 I used Michael Miller's 'Secret Garden' fabric from the Mezzanine collection.  It felt funny to write that--usually I have to think of a fancy way to say "I got this at Joann's," but I love his fabric lines so I decided to splurge a bit.  I'm putting my leftovers into a scrap quilt--at these prices you have to use everything. 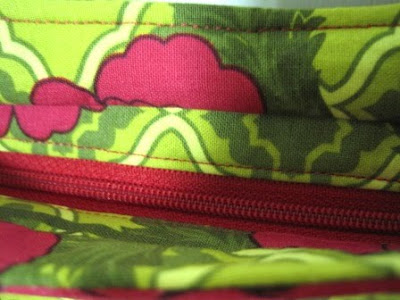 This is the zipper set down from the top of the bag.  I couldn't get the color just right but it's good enough.  Not too bad--usually my 'learning experiences' look a lot worse.
And I had a wee bit of the nerves yesterday afternoon.  And when I get that way the only thing that soothes them is something crafty.  I had a pattern laying around I've been anxious to try, so I figured I had just enough time to whip this up: 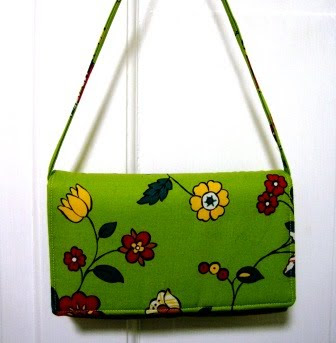 I ordered this fabric online and liked it a lot more once I saw it up close.  Of course it was sold out so I needed to put what little I had to good use.
It's a basic little purse with a strap that can tuck inside in case you're feeling like carrying a clutch.  This one will be up in the shop shortly.  It went together pretty quickly, which is something because I've never made this one before.  It has Timtex inside (I don't know if that means anything to anyone) so it has a nice stiff feel to it like something you might buy in a store.  The only goof I made on this one was that I put the piece of fabric on the inside that I wanted to show on the outside, but it's just a reminder to be more careful next time.
I've been high on inspiration but low on motivation lately.  Hopefully these few little bits of success will get me back in gear.  I have piles of fun fabrics and a big box of bag handles and other fun stuff to use.  I can actually open my own store right now, I believe--I really can't ignore a good sale.
A few bits for thought:
1.  I'm not sure if it's just me, but the ladies figure skating is leaving something to be desired--I hope we get this together in the next few weeks because...
2.  I love the Olympics.  In a weird, inexplicable way.  I always have, and mostly the Winter Games.  Even the boring stuff that's not interesting to watch.  I like the different names with 47 consonants in them, and the different athlete bios they do--especially those from other countries.  But I think it's mostly because the world seems to be watching together--and I like things in unison.
3.  I saw the movie Legion last night.  Not my typical cinematic fare, but one of my resolutions was to step outside of my old self a bit--and it wasn't bad.  I rather enjoyed it.  It won't be winning any awards, but some of the dialogue was good and it kept you watching.  So yay for movies-I-wouldn't-normally-watch-but-am-glad-I-did.
4.  I'm ending on four.  Becuase it's not an even five or three...and I made that resolution :)
From the convoluted brain of Bethany at 11:00 PM