Want to see the most awesome cookie jar ever? 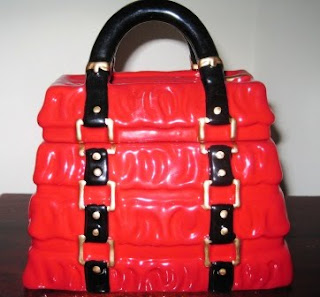 There.  There it is.  A bright red handbag.  Love it!  It's actually too small to be a decent cookie jar, so maybe it's more of a candy jar kind of thing. I don't care--whatever it's supposed to be it's nifty.
Sooo....I love winter.  I love wearing cozy sweaters and drinking lots of hot beverages and knitting afghans that lay across my lap and keep me warm as I make them grow.  I don't even mind the snow--it makes the world pretty.  But today, I was getting ready for work and felt very m'eh about my wardrobe choices.  I wanted to be cozy but I felt the need for some funk.  So I donned these: 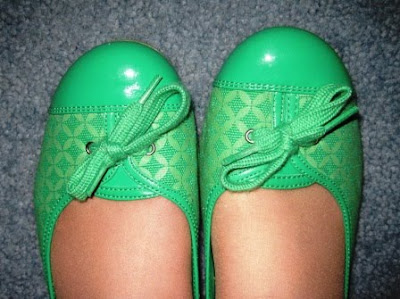 My sister told me she would kill me if she saw me ever wear these in a season other than summer.  She would actually like to kill me any time I wear them. She haaaaates these shoes.  Last summer I was in Target and saw them--they were pretty cheap at $25, but I felt it would be too whimsical of a purchase.  A few weeks later I was in Target during my lunch break and thought that if they were still there (they had only had one pair in my size) I would buy them because obviously they were meant for me.  They were there and at half price (to which my sister said "Bee, things on clearance are there for a reason").  I snatched them up, and it took a lot for me not to put them on the second I got in my car (the fact that I had on a purple shirt helped--even I won't unmatch that much).  I'm pretty sure they have magic powers.  They're extremely comfortable and I feel like I float when I wear them.  I haven't had a bad day when I've worn these shoes.
Not fun: making curtains.  Measure. Fold. Pin. Press. Measure. Fold. Pin. Press. Stitch. Repeat. At least I get something totally unique out of the process.
Fun:  Meream, over at Bored and Crafty gave me a little mention and a link on her blog because I sent her photos of an antique teapot I found (she collects novelty teapots and has a few I want to steal).  She's in the Philippines so that was kind of neat.  And a girl I work with makes cards and jewelry and has a blog to showcase her work (which is beautiful--so detailed!) and gave me a little shout there at Notions By Teres.  Check them out for some lovelies.
From the convoluted brain of Bethany at 11:27 PM