Welcome to the Epitome of Small Town, USA

I could spend forever on this porch, listening to birds chirp, cicadas hum, and looking at sunshine and flowers.  I can hardly believe that it was me who used to whine about coming here, saying "But there's nothing to do!" (as though you couldn't curl up with a book just about anywhere).  Now I long to come here and have nothing to do but relax and refresh.

Yesterday my mumsy and I decided to go for a walk about town.  As we stopped for pictures she joked that if anyone asked what we found so photo-worthy we would just say we were doing a photo-article for the Pittsburgh Post Gazette. 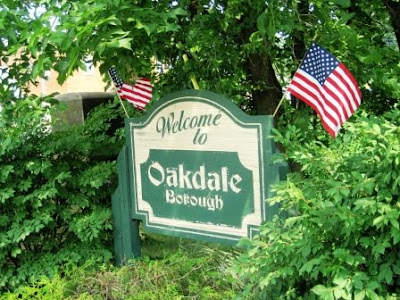 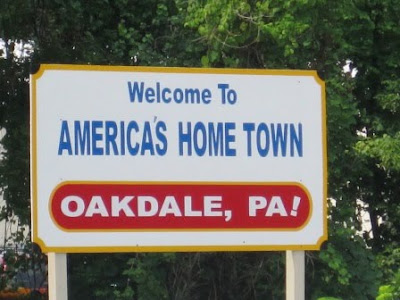 It must be true if the sign says so!  But it could very well be true--parades, carnivals, flags flying, flowers planted by the town garden club--it's all here! 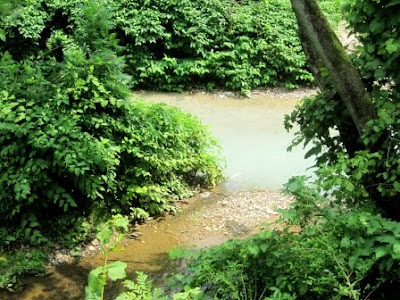 This creek runs through the entire town.  In 2004, there was a massive flood caused by the double-whammy rains of hurricanes Frances and Ivan--there was a lot of damage with waters about ten feet deep filling the streets. 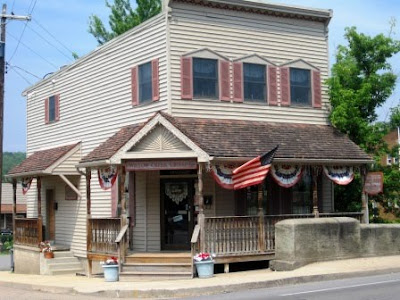 This adorable country gift shop is situated just over the creek.  The building is well over 100 years old--it used to be a pharmacy, then became a candy store/sweets shop, and eventually became this store. 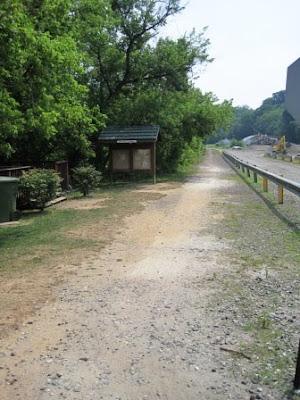 This town was once a railroad town.  This spot here used to be the old railroad tracks, but they pulled them up to make a biking/walking path.  I remember hearing the train come through when I was little, and I do miss it. 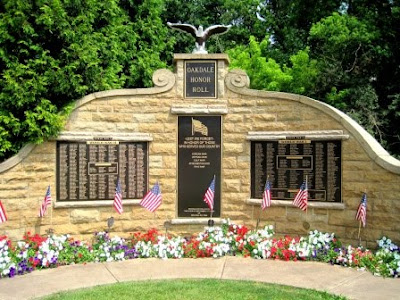 This is the Oakdale Honor Roll.  On the left are the names of those who served in World War II, and on the right is World War I.  I used to think it was for the kids who did well in school (when I was about 8--not recently, folks). 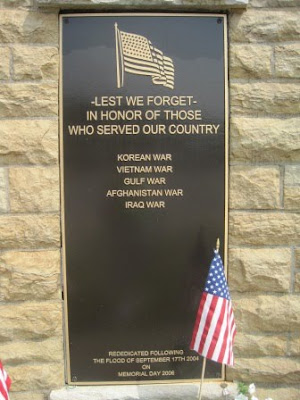 This center section honors the other wars.  It was added and the whole monument rededicated following the flood.

And there's my Pappy.  He was a true American--he was in the American Legion, the VFW, served as mayor of the town, was in the Volunteer Fire Department, and worked in a steel mill after the war, among other things. 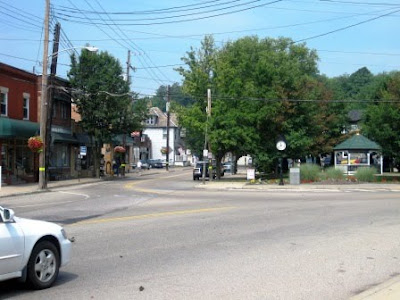 When I tell you this is Downtown Oakdale, I'm not kidding. 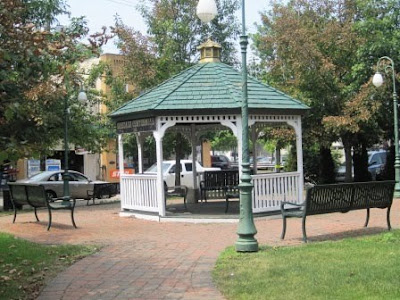 At Christmas the gazebo is all lit up. 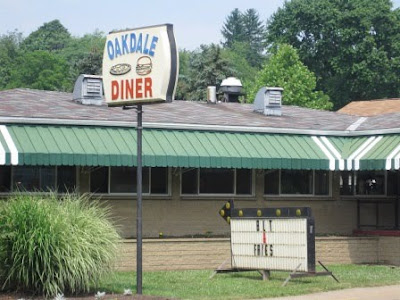 The sign says BLT and Fries on this side, and Bacon and Eggs on the other.  Way to sell it, guys. 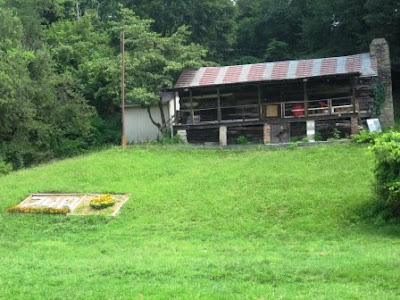 This is the Boy Scout cabin of Troop 248.  My dad used to go here for his troop meetings.  The creek runs directly in front of it, so I'm sure it's seen its share of flood waters. 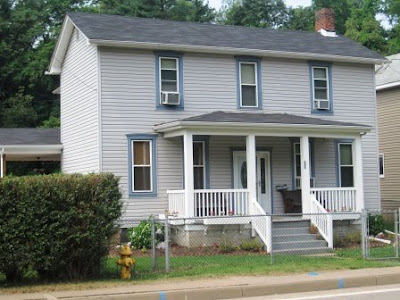 This used to be my Great Grandma's house.  I used to think it was the neatest because it was the only house I had been in that had a living room AND a formal parlor.  When you went upstairs the railing extended along the hallway, and felt very grand and rich to me. 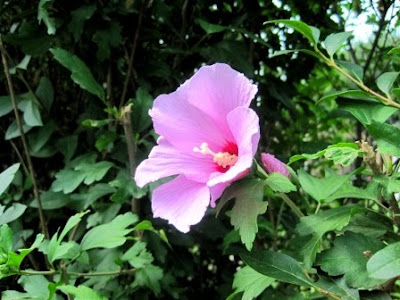 One random hollyhock was growing in the hedge beside the house.  My mom told me that when she was younger they used to pick these and turn them upside down to use as fancy dresses for some of their dolls.  I didn't get the imagination gene in that regard.
And here are a few images of things you usually only see in small towns. 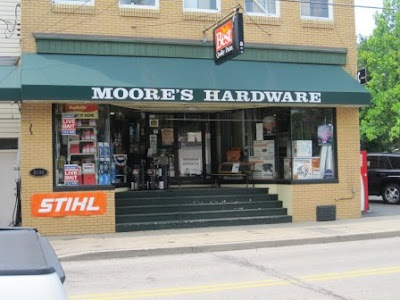 No Home Depot here--although I don't shop for such things I do enjoy the idea of the old-fashioned hardware store. 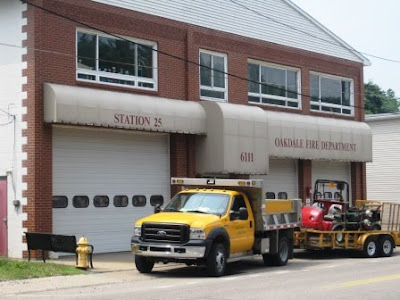 The Oakdale Fire Department.  I think all of my uncles were part of this at one time.  There's even a town fire alarm that rings super-loud to let everyone know their services might be needed. 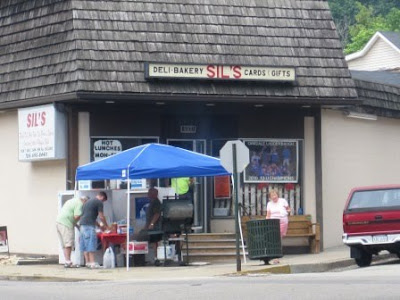 One of the food markets in town was having a cookout. 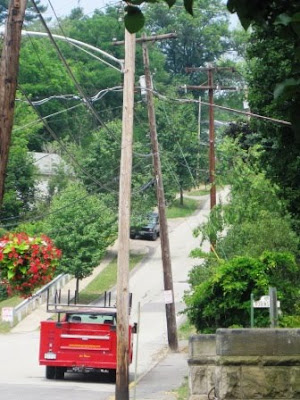 Rugged trucks are necessary for such a hill.  It's much steeper in reality than in this photo. 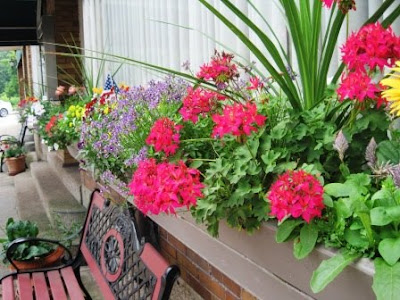 I found it interesting that some of the most beautiful images of life are planted in the window box outside of the funeral home. 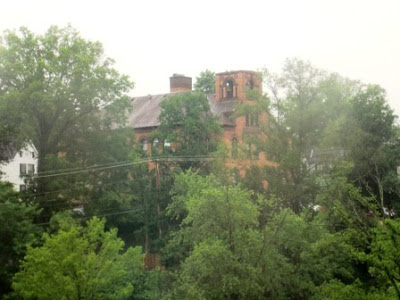 This photo was taken from the bedroom while it was raining, so it might be hazy.  It's of the old elementary school--it's now been turned into apartments.  I would have loved to have seen the inside, but I was much younger at that point and had no interest in such 'silly' things. 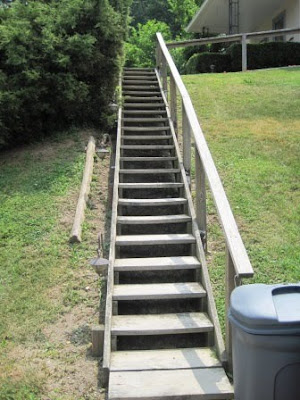 My grandma has climbed these steps for almost sixty years now.  She's almost four-score--that's some exercise! 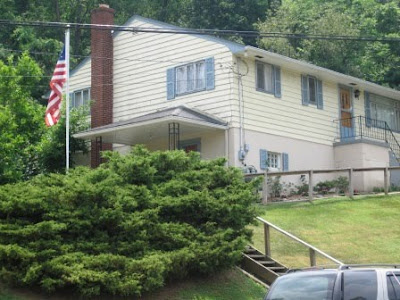 They lead to the little house on the hill, full of love and good memories.  Grandma would be aghast that I posted this--she's planning on having the house painted soon.


And that, said Bee, is that.
From the convoluted brain of Bethany at 12:39 PM