Happy Sunday to you all! And Happy Father's Day to all the relevant y-chromosomers out there :)

I've been trying to think of things I may have made for my dad when I was young, and I came up with nada. Other than a few cards or pictures that are long gone (or that time I was about four and put stickers on his briefcase because I thought he would just love showing it off to his co-workers at the chemical plant), I came up with one thing. A ceramic pencil holder in the shape of a pencil that I painted. That's it! Sad, I know... So since I have nothing to show you from Father's Day past I'd figure I'd give you two opposing memories - one where I remember my father as a genius and one where I thought he was NOT so smart (such are the perils of parenthood).

My brother had a set of Tinker Toys (who didn't?) that I used to love to play with as well, even though all I could make with it was the base of a car - and I used to be dead proud of myself, thank you very much. I remember one morning I came downstairs (I think we had company which is why my dad hadn't left for work yet) and he was sitting at the kitchen table with a Tinker Toy ferris wheel. It had this little hand crank thing that made the whole thing go around. I was absolutely amazed. And I think I may have gotten upset to the point of tears when he had to take it apart (because according to my mother "Where are we going to put a ferris wheel?"). I still think it was a technological marvel. But my dad has always been like that. He was the go-to man for math and technical-related issues, especially in high school. He'd get so into tutoring me on derivatives or something or other in my pre-calculus class that he'd keep going through the book and showing me all kinds of weirdo math stuff that my brain just could not process. As a matter of fact, I'm pretty sure I wanted to say "Wait...can we go back to where one plus one equals two, because I think that's where you lost me...." We always teased him that he was such a nerd, but secretly I wish I had math brain. 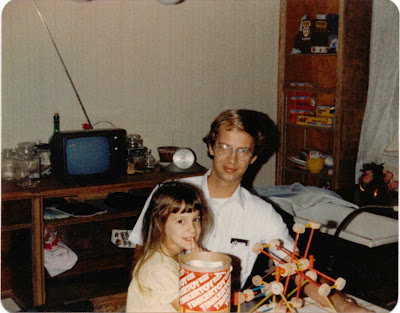 In this picture he had already started taking it apart... I think that's why my mom took the picture, so I'd have something to remember Tinker Toy Ferris Wheel by.
Here's the not-so-smart one (but one of my favorites). My dad is a tall guy, about 6'5. This is great for getting spiders on the ceiling, reaching things on the top shelf, and eliciting oohs and aahs from your friends whose dads were the more common, plain old 6 feet tall. As you can imagine, having your head that high off the ground leaves you open for a direct hit from cabinet doors and whatnot as well... just saying. I remember once my dad was putting some beer in the fridge - he was squatting like a catcher to put it towards the back. I distinctly remember saying "DO NOT STAND UP, DAD, BECAUSE I'M GETTING A POPSICLE." I kid you not that two seconds later he stood up, straight into the freezer door, cracking that special spot on your head that hurts like no other. And he didn't just gently rise into it; I remember more of a popping-jumping type of standing up. I'm actually surprised he didn't take the door off the hinges. Well, he turned bright red and looked at me with a "WTF?!" look on his face. And I remember standing there, staring at him and thinking "Idiot. I said don't stand up." Of course I didn't say this out loud (did I mention he had already turned red?).

I have a brain full of such memories, those of the head-banging, fall into the swimming pool type. And the kind that are "Dad...something technical...hammer...level...measuring....math." He's always good for both types. So Happy Father's Day, Dad...and I need to borrow $20.

From the convoluted brain of Bethany at 12:57 PM