I fell a little bit behind on my quilt along blocks due to vacation, so I soldiered through the other night and made the two I had missed. I realized that I am suuuuuuper sloooow at cutting. I try really hard to be precise, but only in my world is 3 inches a relative measurement that can vary from piece to piece even though I swear it starts out as 3 inches. I also realized it might be a good idea to measure my blocks as I go and to trim as needed. Trimming little bits is much better than trimming big bits off the finished block that might affect the overall look. See? I'm learning already. If we get a "design your own" block again I might actually be able to do it, math and all.

So here's the first one - it's called Parade of Pinwheels: 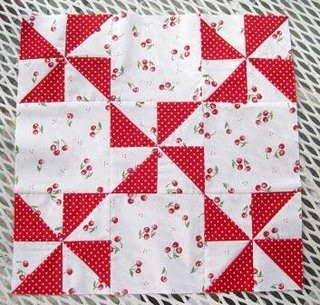 I was going to try to use a different fabric for each pinwheel, but when I laid things out it wasn't going to look right, so I went with my two favorites. There's a lot more white space in this than I usually like - I was going to try some plain white to see how it looked but I'm glad I didn't. Waaaayyy too plain. This one was pretty simple to make. It was the block where I realized I need to trim my blocks and measure at each step so it's really accurate. Good thing to realize - I thought I was losing it for the first few blocks. 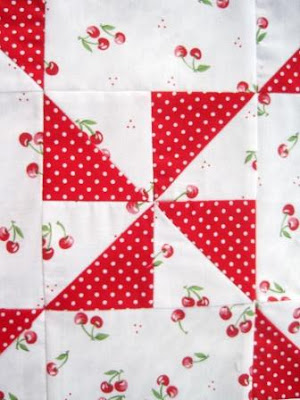 I am seriously in love with this combination. The ceremony is next weekend with reception to follow (cuz I'm gonna marry it I love it so much....teeheehee).

The next one is called Arizona Star with an alias of Robbing Peter to Pay Paul, but I think another design is also called RPTPP so she went with Arizona. This one in and of itself was not difficult at all, and I'm getting quite handy at half square triangles: 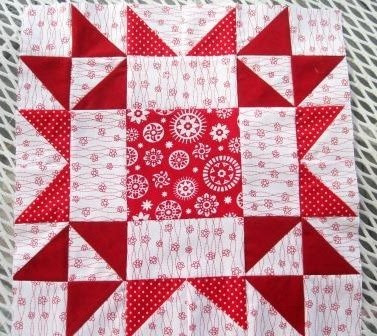 I like the way the solid red makes it pop a bit, but doesn't dominate the others. The only problem with this one was pressing a gazillion and seven seams. I had a rough time figuring which way to press and what would butt up against what, and so on. I pressed the bejesus out of it and it all ended ok, but I won't lie - there was cursing. But I don't think it's too bad - I only had one triangle point get munched: 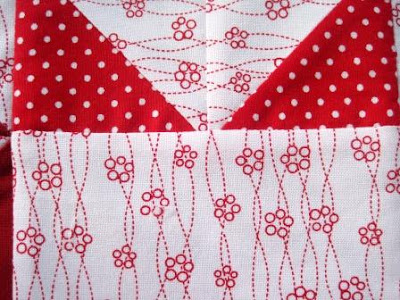 Now I'm all caught up just to have to get going again when the next block is posted tomorrow. Wanna know what else I still have to do? Baste and quilt my Sherbet Pips quilt (can't wait to show you that one!) - I'm doing it by hand and am looking oddly forward to it (but might wait until it cools off a bit), and I have to knit an armadillo. That's a whole other post....

Have a happy Friday, my loves!
From the convoluted brain of Bethany at 8:51 AM