I've been feeling poorly and sorry for myself for a few days. I felt so stuffy, congested and blah that I had to take a sick day on Friday. And I'm going to just toss this out there for pure snippiness--I was laying on the couch, absolutely miserable, and my sister asked if I wanted tea or anything. I had just finished a cup so I said no. My brother came by and asked if I wanted anything. The first time he asked I didn't. I asked my dad (a bit later) if he would make me toast. You know what he said? He wanted to know why I couldn't do it myself. The nerve! No sympathy from the paternal unit. But you know what? My brother got up and made me some perfectly toasted toast, buttered to perfection. So this week's cool points are awarded to my bro, and my dad still owes me toast.

That being said, I haven't gotten much sewing done, which is bugging me because I have so much of it. That should all be back to normal this week, though. However--I do have a bag I made about two weeks ago to share with you. A friend of mine has an uncle recently diagnosed with cancer. As seems to be the case all too often these days, he is lacking medical insurance, so his family and friends are putting together a beef-and-beer fundraiser to help with bills. I donated this bag to one of the baskets being raffled, and as I frequently make bags for this family (seriously - they're my three best customers) I've been informed they're all hell-bent on winning it. 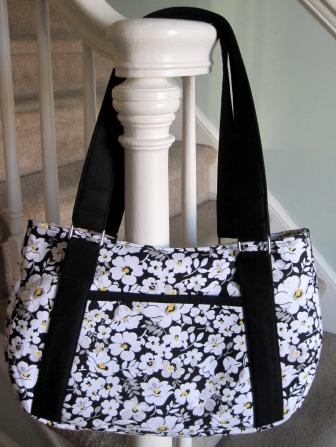 I've made this bag many times before, but it's such a good size with lots of pockets. Plus it goes together pretty quickly without a ton of fabric. I've been wanting to use black and white with yellow for a long time, so I decided something like this would be a good bag to experiment on. 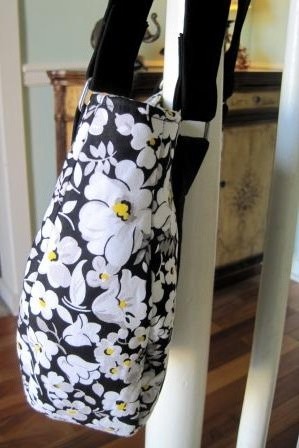 I had a hard time with the gusset. TWICE I managed to mess it up a bit. I tried to fudge it in, but it didn't have a good look to it at all so I'm glad I bought extra fabric (I just might be used to messing up :) 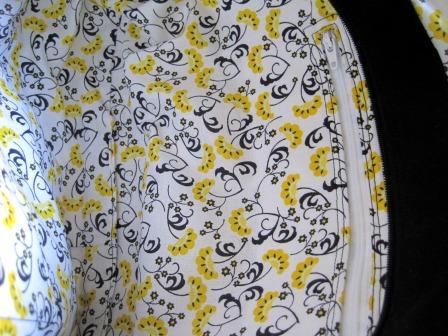 I love the inside It's nice and cheery but not obnoxiously bright. I could have used plain black, but I personally don't like black linings. They make me feel like I'm looking into a deep abyss with nothing there but my echo. I know. I'm weird. But because of that I try to avoid lining bags in plain black. Besides, I like the secret pop of color a lining can give that no one else can see. 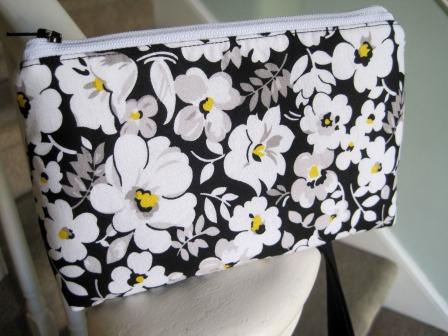 I made a matching zippy pouch to tuck inside for all those little things that rattle around in the bottom of a bag. I replaced the pull on the main zipper with a larger one, and had a length of zipper tape left from what I trimmed off the inside pocket. So as not to waste either I combined them, and I think it looks kind of cute. 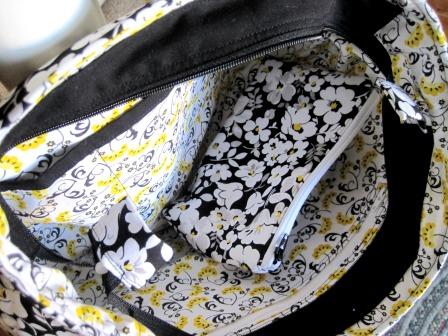 It tucks inside just so, surrounded by slip pockets and a zip pocket. It all closes with my favorite kind of zipper closure - the suspension bridge. Or whatever the technical term for that is. 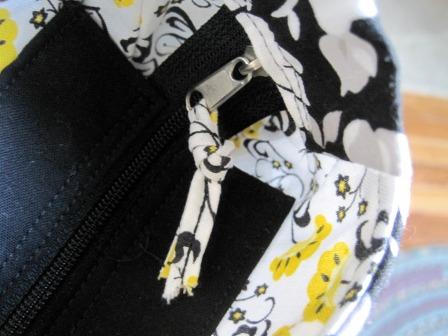 And heaven knows one can't forget the fabric on the zipper :) For those with eagle eyes I trimmed that stray thread right after I took these photos. I know you were worried.

So that's what I've got. I finally scored the fabric I've been looking for (custom order) so you'll get to see that next week. I have to hop to since I've been a lazy mess for almost all of the past week. I also got a new computer and have been transferring files and all that jazz. I still need some tech support (a.k.a. my brother-in-law Matt) to make sure I got everything right, but I think I might be good to go. We'll see. I feel so guilty, though! Do you ever get like that? There was nothing wrong with my old laptop--I just needed a bit more juice. But I brought home the new one and I feel like my old one feels neglected and unloved. My mom actually wants it so it'll have a good home, haha. I did the same thing with my sewing machine - I felt awful getting a new one a few years ago, but I'm so glad I did. Can you tell I'm Catholic? Did you ever see so much guilt over nothing? I'm blaming it on the Nyquil. I hope I'm not usually this crazy sounding. Maybe I should go to bed. I think I fried my brain with all my computering today. Have a loverly Monday. I don't wanna go to work tomorrow.