Color Pop Bag and Other Bits

What a weird and random day. I was pulled from bed to attend breakfast with my brother and my nephew. OK, lie. Not really pulled so much as lazing around when my brother called and I had to rush to get ready. The other way makes me sound so much less lazy. Then I had to do a return at a store and there's a lovely produce and flower market nearby--I stopped in and bought these beautiful sunrise/sunset roses (not sure if that's what they're called, but that's what I named them): 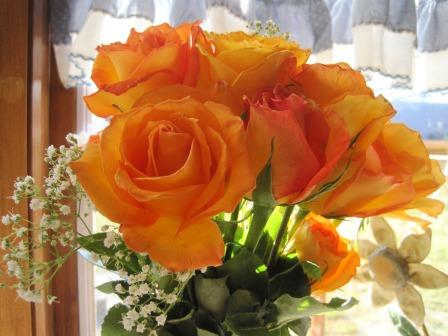 Fresh flowers make me happy. They seem wasteful as they don't last very long, but it's just so pretty and nice to have them around now and then. Even better when they're only a few dollars.... I also bought these carnations--they should last a bit as many of them are still tight in their buds: 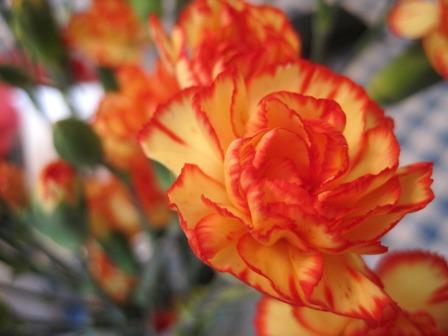 And then--I made dinner! Yes, you read that correctly. I am seriously challenged in the culinary arts, but I made dinner. I made a shepherd's pie. It turned out quite yummy. I had my mumsy nearby for the occasional taste test, but other than being a little low on the salt I did quite all right. My auntie came by and brought scones (which I've never had) and fresh strawberries. They're quite good! My sister had whipped up some fruit dip for the strawberries, and a little dab of that on a scone was very yummy in my tummy for sure.

I sewed myself into a headache last night, and didn't accomplish nearly as much this weekend as I had planned, but I did manage to finish up an order I've had for a bit. It's a bag you've seen many times, but I haven't made it in a long time (which is what took me so long - I almost forgot my order of operations :) 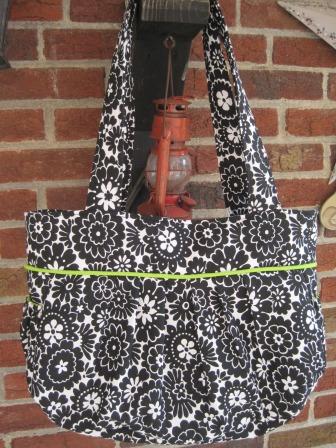 I had a hard time finding fabric for this one. For a million years Joann's has had the perfect black and white floral for this order. I looked for weeks and they didn't have it. The other B&W florals just weren't right, but I found this in the home dec section. It was the closest I could find anywhere (in the real world and on the internet) so I went with it. I had some reservations when I heard 'lime green' for the piping and lining, but I ended up really liking it. I think it would look great in a zebra print too... 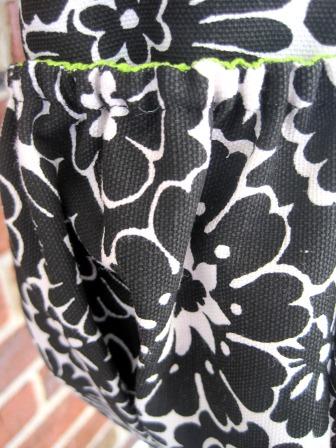 I think I've finally perfected the elasticized pockets on the sides. 'Bout time...I think it helps when I actually write down the measurements and what I did the LAST time. Who'da thunk it? 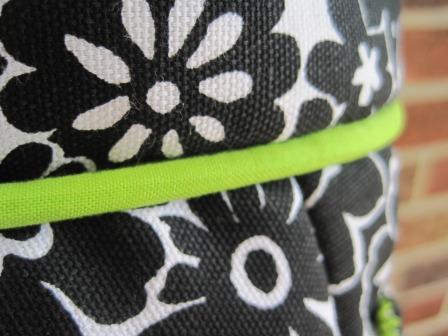 Piping makes everything better. If I were to run for President that would be my campaign slogan. Because you really can't argue with it. 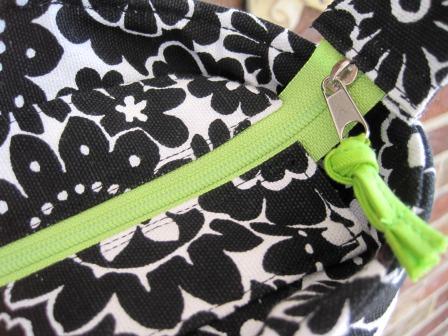 I was going to do a black zipper, but the black and white is verrrrrry busy and I thought it needed to be broken up by a little more color. The green isn't exact but since it isn't paired up against the lining you can't really notice it. It sits down in the bag a little in case the recipient doesn't feel the same way about pops of color here and there. 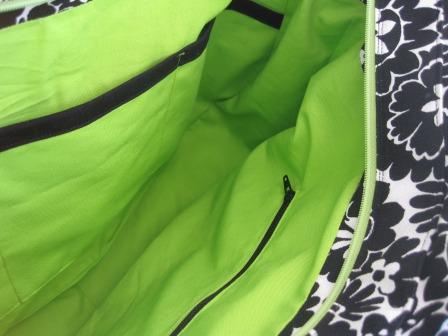 The lining was originally supposed to be black with lime green polka dots. Do you know that such a thing does not exist? I searched the usual stores and online shops, as well as Etsy and Artfire shops, eBay, everywhere. Every other color combo for polka dots exists but this one. I was disappointed - polka dots are my favorite. But lime green was the second on the list and easy to obtain. I'm quite sure that tomorrow a black/lime dottie print will be available somewhere.

So that's all I've got for now. A busy weekend that wasn't the usual...I've got a diaper bag on the drawing board next - pretty colors will be a nice change from the black and whites.


From the convoluted brain of Bethany at 10:28 PM