'Allo! It's been a bit since I've posted so I thought I'd pop in and say hey-o so that you wouldn't forget who I am :)  I'm still sans PC, but I think my BIL is getting there with it, bless him. I'd have taken a hammer to it and headed to Best Buy weeks ago if it was up to me, but it's in his hands and he keeps plugging away at it. Apparently I had one doozy of a virus that was trying to eat my computer from the inside out (and I say that almost literally). Due to a nice crack of lightning over the weekend we've also been sans internet, so I've been doing everything on my phone (not as easy as it sounds when you have big fat thumbs like moi). I have been finishing up some sewing projects, or at least getting them prepped/started, so I'll have things to share with you soon! My hexie flowers are all done--I'm ready to start on all the white shapes that will tie it all together. What else....what else... I decided to do a spring craft show, so I'm thinking on details for that... I'm madly in love with the newest nephew, and the oldest one is breaking my heart what with his going into stinkin' fifth grade in a few weeks. I'm going to be a little sad when the Olympics end, I love them so. I always have--I remember being little and just staring and staring at the TV every few years while people jumped and twirled and did whatever they do. I wish they'd get new announcers/interviewers--they're awful!! "You must feel terrible, getting the silver medal. What's going through your head?" Ummm...lady? It's a flipping silver medal. They might actually feel quite good about that feat! My sister has bellowed from the other room several times during the swimming finals interviews "OMG, I HATE this lady!!"

I suppose that's all that's been going on. Quite boring, actually, but hopefully more on the horizon. Not more boring stuff, more in the sense of more events and makings to share. What's been going on with you? Any fun summer events? Fabulous projects? I want to know! 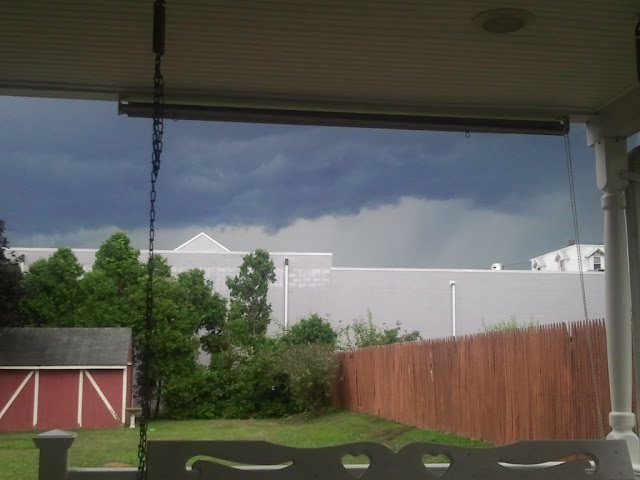 ﻿This storm came rolling in when we were sitting on the porch the other night. I do love me a good thunderstorm, but not when it kills the internet and makes everyone scramble to carry things in off the porch that might go flying.
From the convoluted brain of Bethany at 11:22 AM