Foldover Clutch for My Leetle Seester

So my sister asked me to make her a clutch. A foldover clutch, to be precise. She showed me exactly what she wanted, and gave me the measurements and everything. Then we went to Joann's. The word to describe my sister Alicia would be...particular. Yes, that's what it is. Once the vision is in her head that's it. No one gets out alive until the vision is in tangible form in her hot little hands. After pulling maybe...all?...the bolts out and deciding that they weren't quite right we were getting discouraged. I walked away for two seconds to look at something else and clear my brain (OK it was longer than two seconds because it was a gnome I was looking at in the seasonal aisle and I was trying to decide if I wanted to spend the money, which I didn't, but it was probably about three minutes if you need total accuracy), and when I walked back to where she was she had a completely different bolt of fabric from anything we had looked at already and had a different plan in mind. My big contribution to the adventure was adding a funky trim to the plain fabric she had decided on (after pairing all kinds of colors with all kinds of laces that would function as an overlay but weren't working she 180'd). The time to put the bits together from that point on was maybe five minutes. The time beforehand? Trust me, you don't want to know.

I got stitching on Saturday, and in a reasonable amount of time had her bag finished. 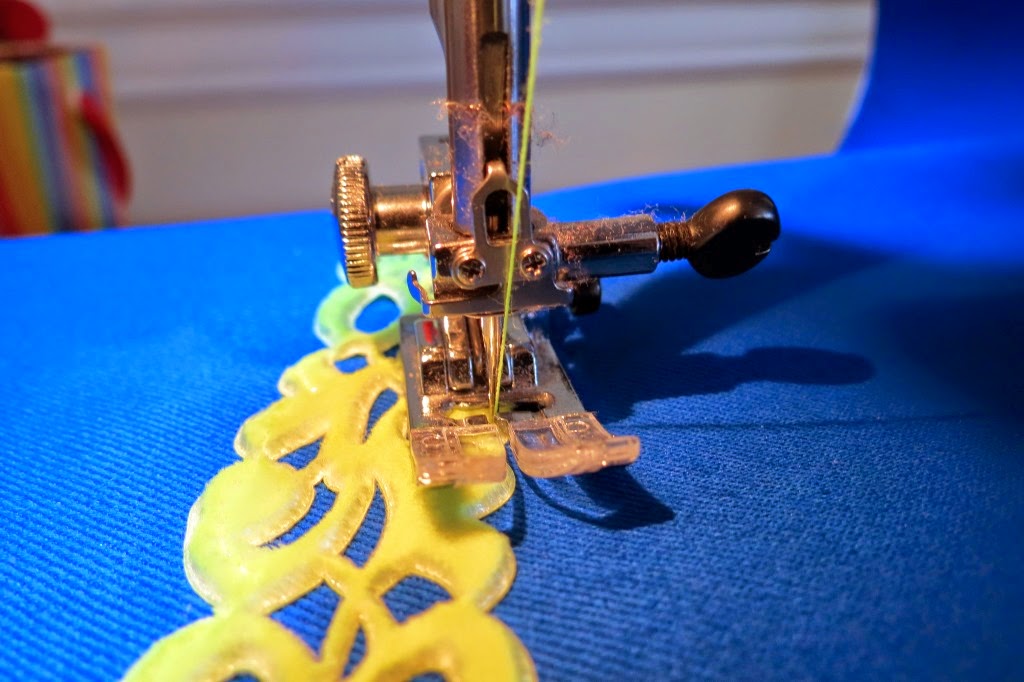 I say 'reasonable' amount of time because this is the trim I had to sew down. I used a smidgen of fabric glue to hold it all right where I wanted it, turned the speed on my machine down to snail, and carefully pivoted my way down the curvy path of this velvety trim. 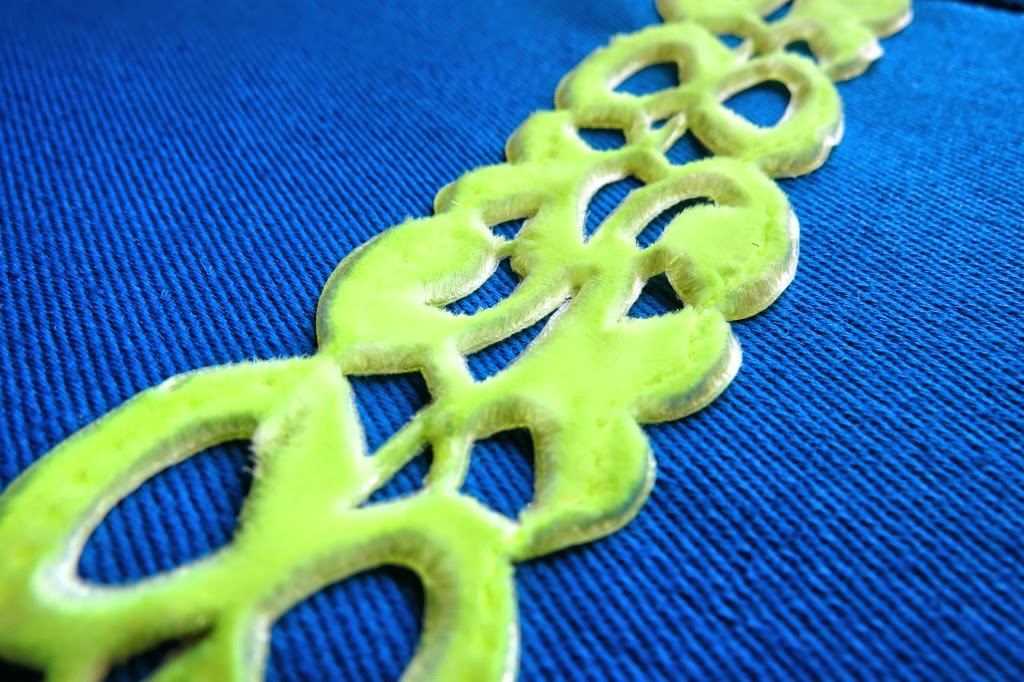 A metal zipper was also part of this project. We didn't have time to order anything online (she wanted this for a function she's got in the very near future), so we went with a white zipper tape with white metal teeth. We bought a long zipper, which I then performed major surgery on to shorten (as you can't just sew right over them as you do with normal zippers). I felt like quite the hero with that one. I may have strutted around the room a little. 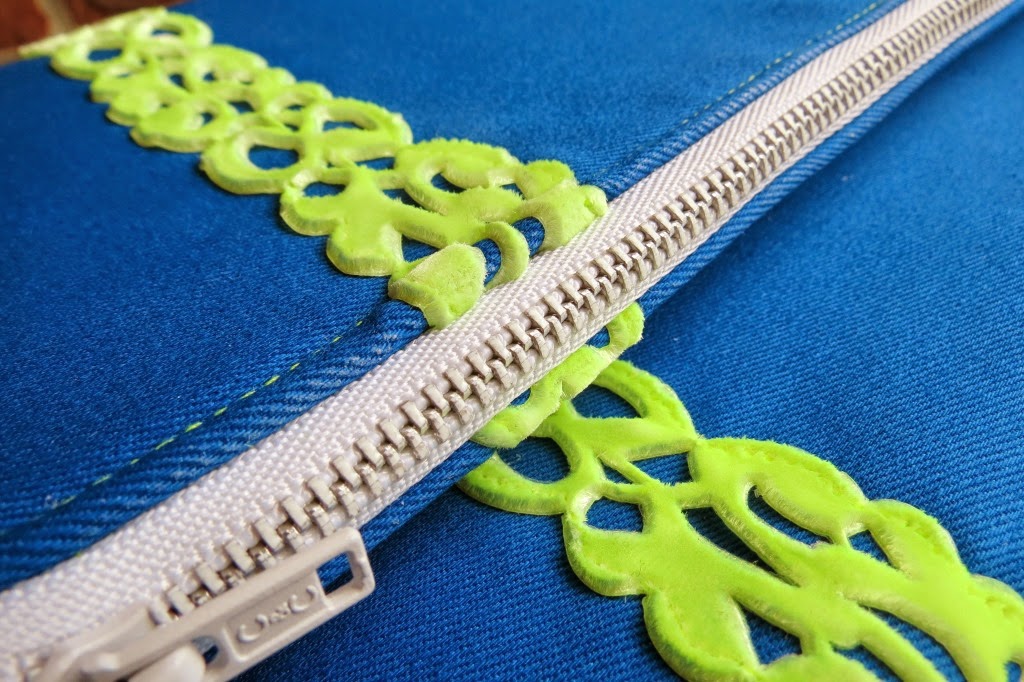 This shot is the closest to the actual colors, bee-tee-dubs. The not-yellow-not-green trim did not want to cooperate with the camera.

After the trim was down and the zipper in place I had to get the magnetic snap in. I'm not a fan of putting mag snaps into bags with flaps as I feel like I never get the placement perfect, but I'm an engineer's daughter and close enough is good enough sometimes. 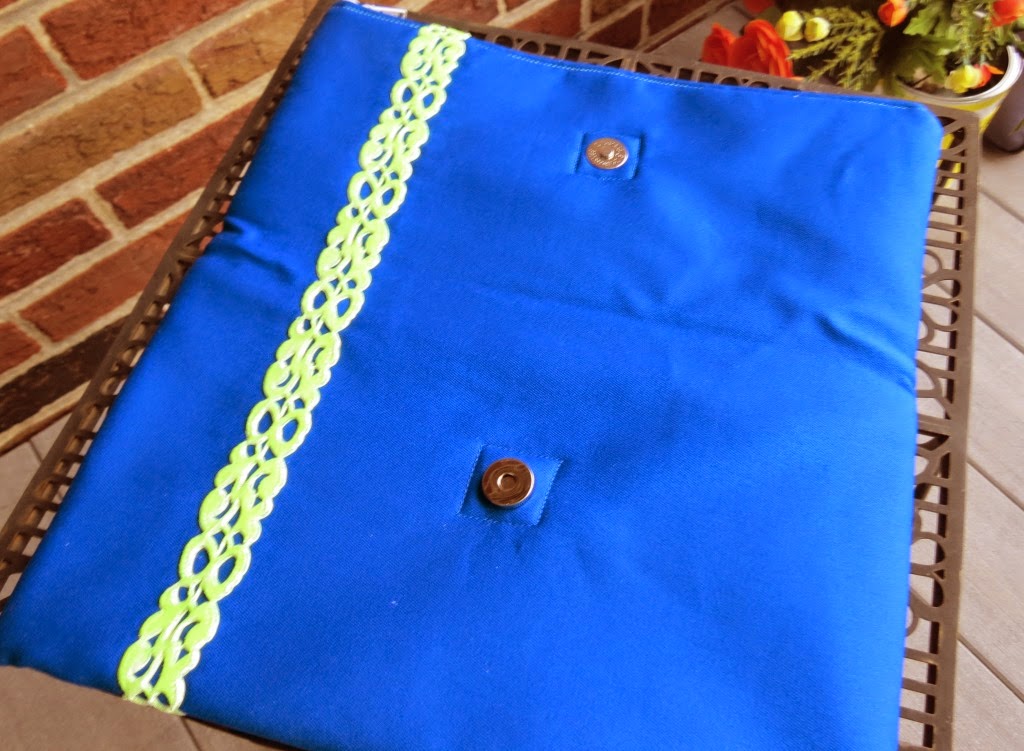 The inside is a kicky lime green that is a really fun contrast to the marine blue. 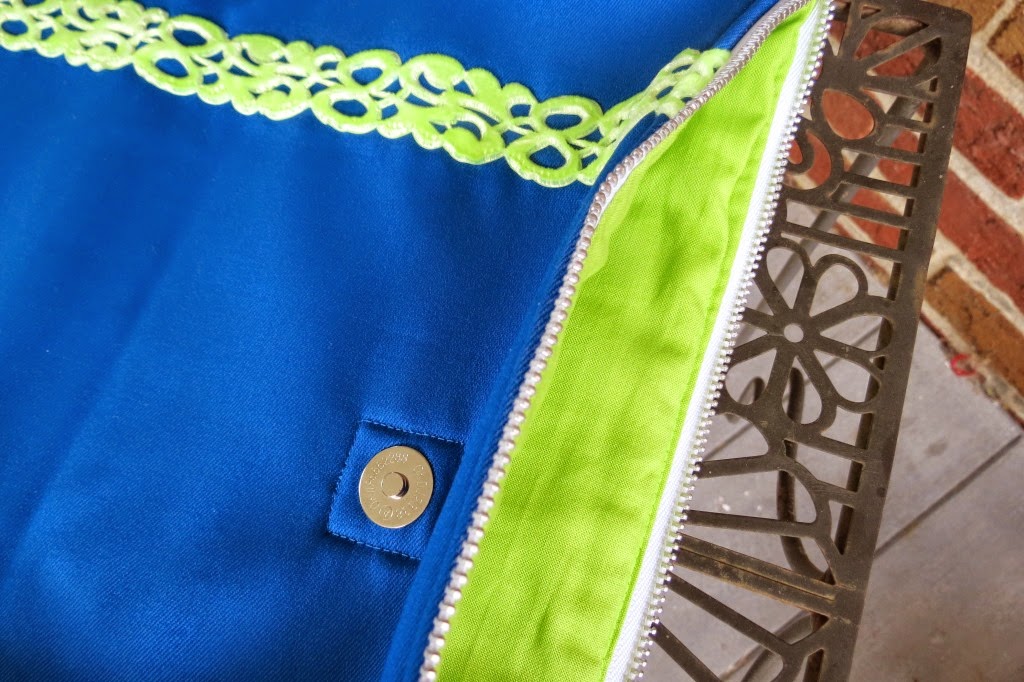 Ready for the whole thing? 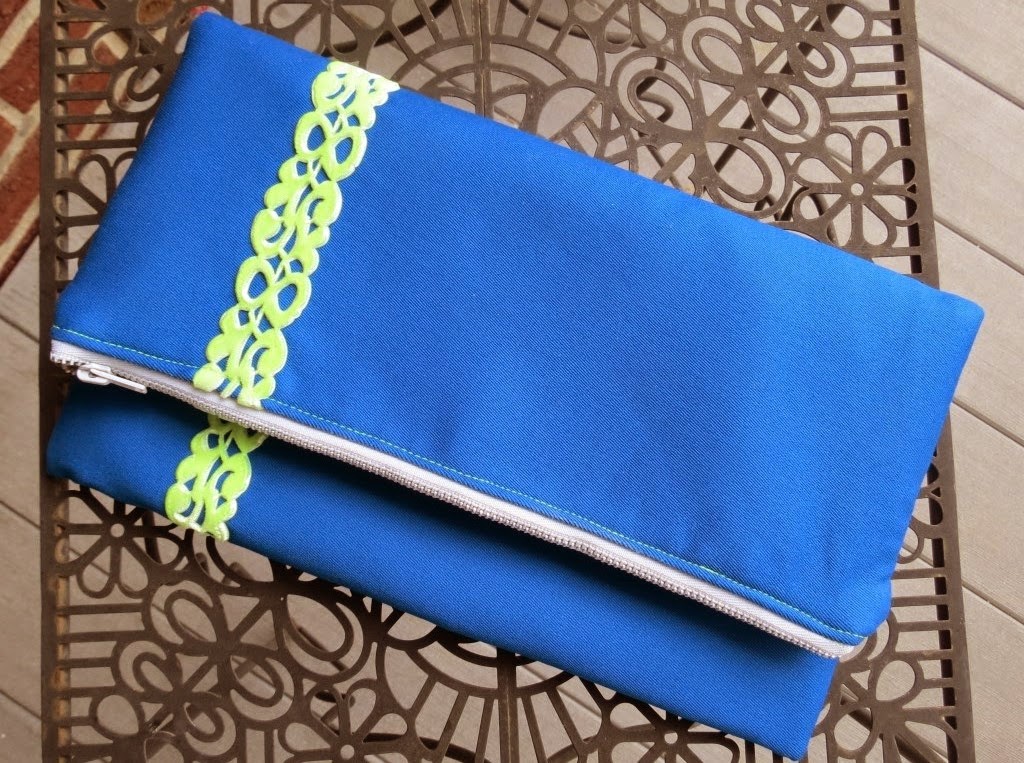 It is so simple, really--just a giant change purse, technically speaking. The trim was easier than I thought and gives such a simple but big impact to this bag. I keep trying to think of what it reminds me of, and I just can't place it. It's one of those things where you see it, the thought flits through and is gone before you can grasp exactly what it is. It will be driving me crazy until I think of it (it took me three nights to try and place something from a TV show that my brain was grasping at, and when it finally did you would have thought I cured a major disease. How crazy--a non-amnesiac remembering something unimportant. Woo-hoo. Pick up your trophy on the way out, Bee).

In other stitchy news--I sewed myself an adorbs needle book as the teeny tube the teeny needles came in is going to result in a needles-lost-on-the-sofa sort of situation. You may have seen it on Instagram, but if you haven't I'll be sharing that soon. And I've made good progress on my hexie project. You know what helps with that? Binge-watching TV shows. If you're looking for an excellent show to watch try Copper. It's from the BBC America, and is available on Amazon Prime and Netflix (I'm pretty sure). It's not a family show, so check it out after the tots are in bed.

Sooo....I guess that's it for now. See you soon!
From the convoluted brain of Bethany at 11:27 PM