A Scarecrow and a Pumpkin Walk Into a Bar

A couple weeks ago the folks at Penny Cottons asked if they could send me some of their fabrics and see what I could come up with. I told them "Sure!" without having any idea what was coming through the mail slot, so I couldn't get my thinking cap on until I had the goods in my hands. They sent me a roll of their yarn-dyed fabrics (which I forgot to take a picture of in it's rolly cuteness). I kicked around a couple ideas (pillows, a boy-themed baby quilt, etc.) but really felt like doing something more crafty than sewy. Upon seeing the fabric, the phrase 'plaid pumpkin' popped into my head and would just not get out. So I decided to go with that. I was walking around Joann's (I go there without purpose and just wander around sometimes) and saw a few papier mache pumpkins on mega-sale (and I also had a coupon that applied to sale items so I couldn't not get them). I bought one of each size and almost skipped home. 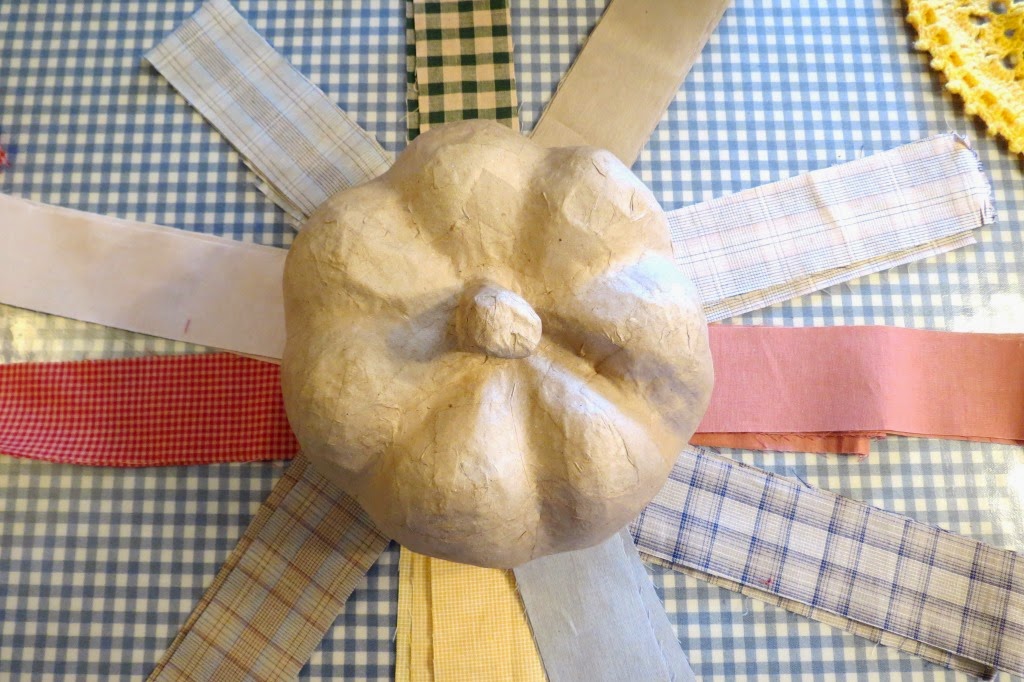 I did add a few strips of my own for a little more color variety (the red, green, and yellow are mine).

I got out the Mod Podge and my sponge brushes and set to work. I painted the glue on the pumpkin one section at a time and smoothed a strip of fabric up the side. I started the strip at the bottom, pulled it towards the top, roughly smoothing it out (I was going for homespun and rough-shod), and then trimmed around the stem. 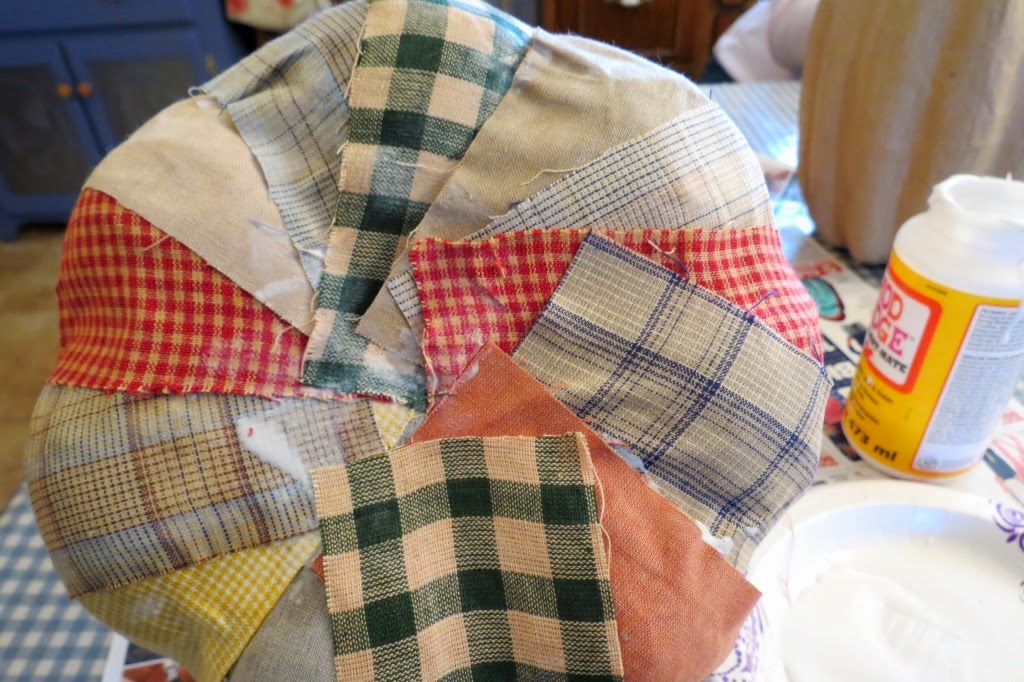 I had to double-up on a few colors as I didn't lay things out in reality as neatly as I had in my head. 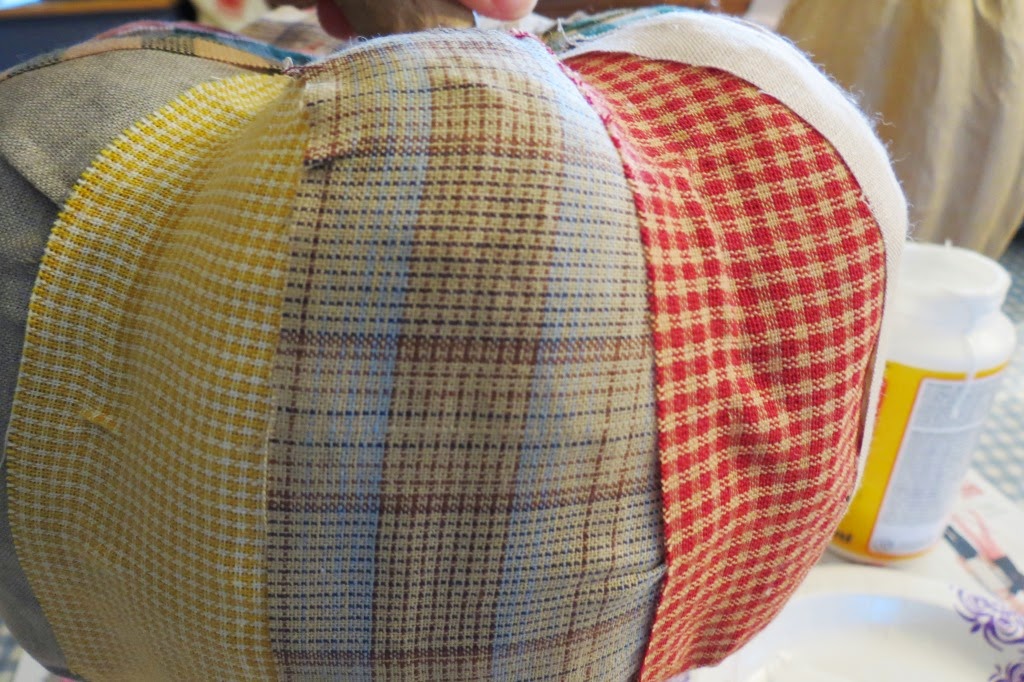 Once that was all in place, I slathered Mod Podge all over the whole thing, making sure the edges were smoothed down. I did have a few fray strings hanging out, but I didn't obsess about those too much, as it added to my homespun look. 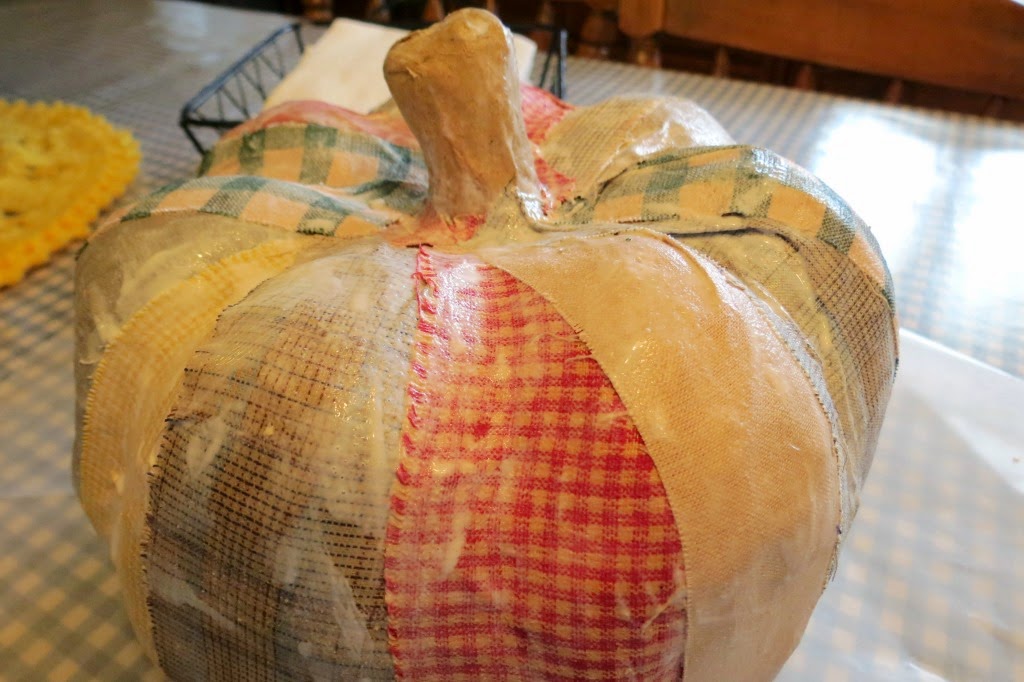 For the second one I cut the rest of the strips I had used for the first pumpkin into rough squares (remember--homespun), and then just glued those down in a random patchworky manner. My mom worked on one side and I worked on the other to speed the process. Then that one got slathered in Mod Podge too, and set aside to dry on a piece of waxed paper.

I used a few of the remaining strips to tie bows around the stems. Raffia was my original plan, but more ended up everywhere else but tied in a neat bow. 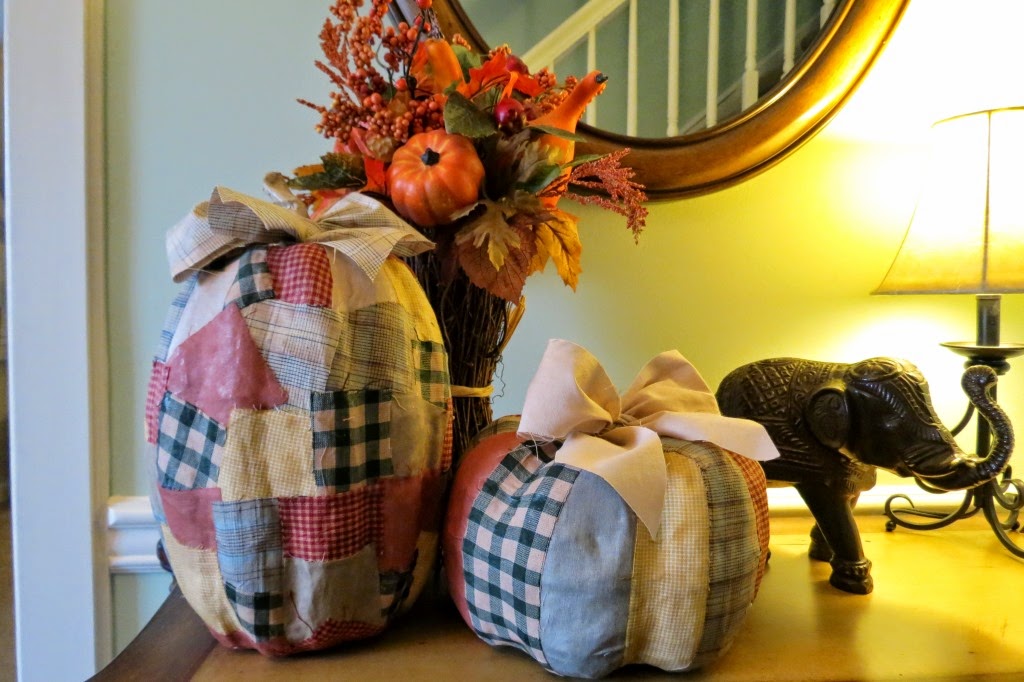 I haven't made a fall-inspired craft in a while, and I love the way these turned out. My mother kept telling me "I don't know, I don't think I'm going to like this" but she then told me they're her new favorite thing. I still have almost half of the roll left (minus the two strips I used for the bows) so I'm thinking of maybe a couple of place mats or a small runner or a pillow or something like that....

Thank you, Penny Cottons, for the fabric for this project! They also sent me a little something else to work with, so I'll be doing that today and sharing it with you soon.

* The punchline to my title is "I told you the kids would be cute!"
** It's actually not. I totally made that up. All of it.

Monday: Made By You Mondays, Craftastic Monday
Tuesday: Homework
Wednesdays: Your Whims Wednesday
Friday: Weekend Link Party, Finish It Up Friday
From the convoluted brain of Bethany at 10:27 AM