I Sewed a Shirt

Sometimes I go on a little kick where I want to sew clothes. They're usually pajama pants and t-shirts, as I really don't know much about fitting and darts and shaping and all that, so I go with easy patterns and fabrics (i.e. knits). A few months ago I bought a raglan shirt pattern, and a few weeks ago in a moment of pure whimsy I bought a fabric I normally wouldn't (because even I have to admit it's a little much). After careful cutting and pinning and sewing and serging I had a new shirt. A shirt I have mixed feelings about (and not because of the fabric).

Behold this rare instance where I appear on my own blog: 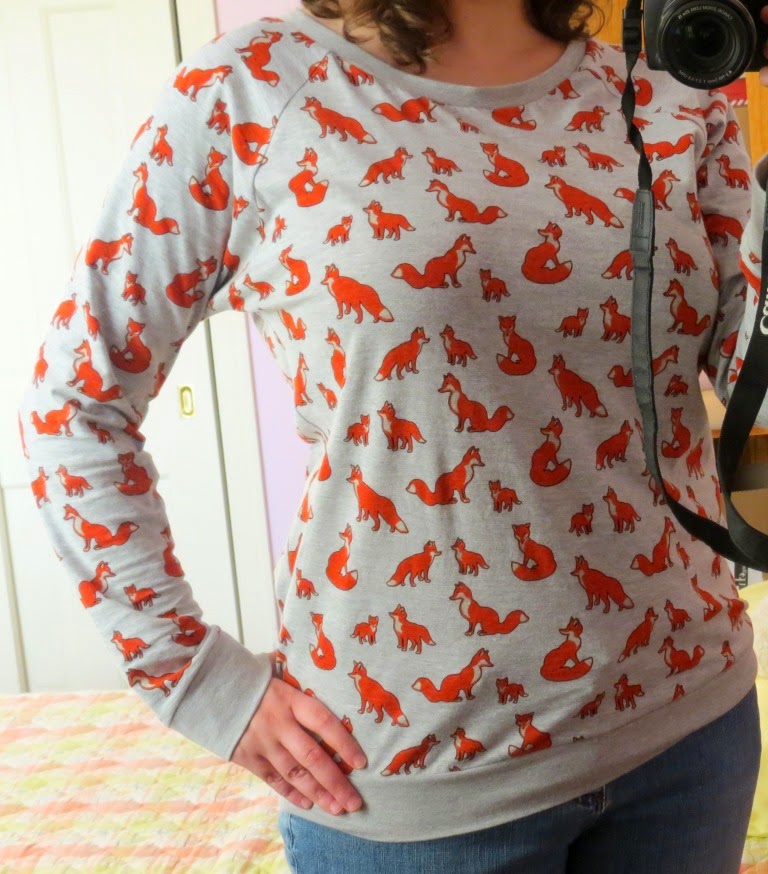 Take a gander at my short fat fingers I'm always griping about :)

Yes, I'm headless, but be glad of that. It's really hard to take photos of yourself without looking like an absolute dingus (whatever that is). I looked demented or cross-eyed or high in each one, so I hope you don't mind that I cut my own head off.

So, the shirt. I know the foxy fabric (I bought it from Girl Charlee) is nudging that fine line, but I like it (age appropriateness not being judged at this time :)  As for the shirt itself the fit is good enough--it's long enough, and that's always a good thing. 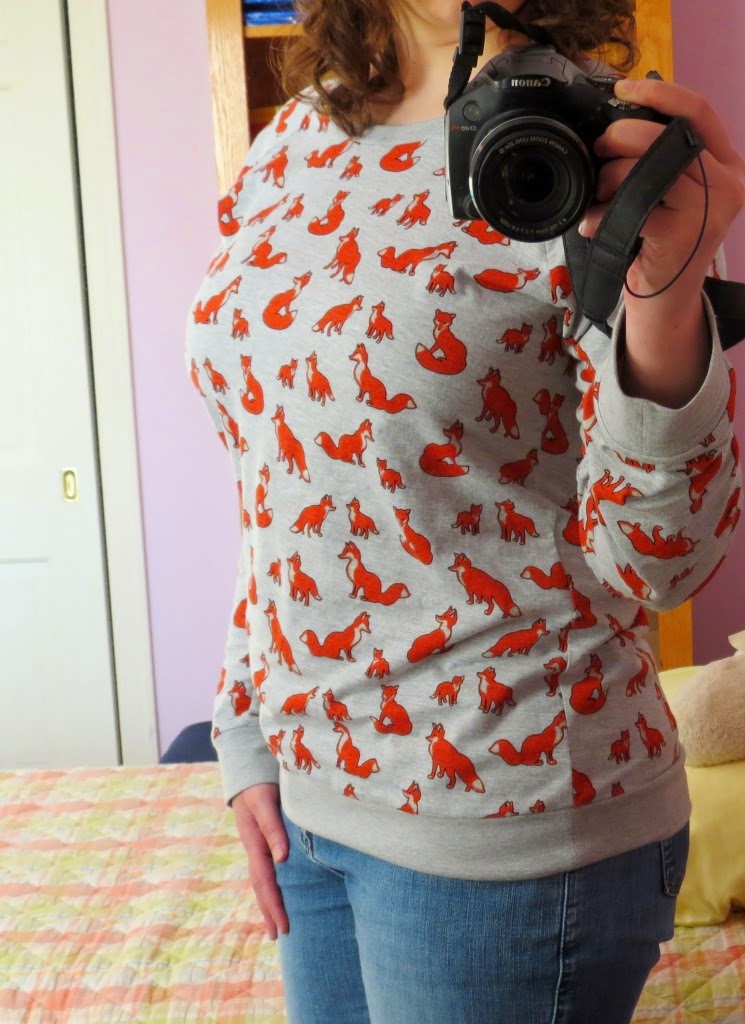 But here's my problem with it--the neckline. 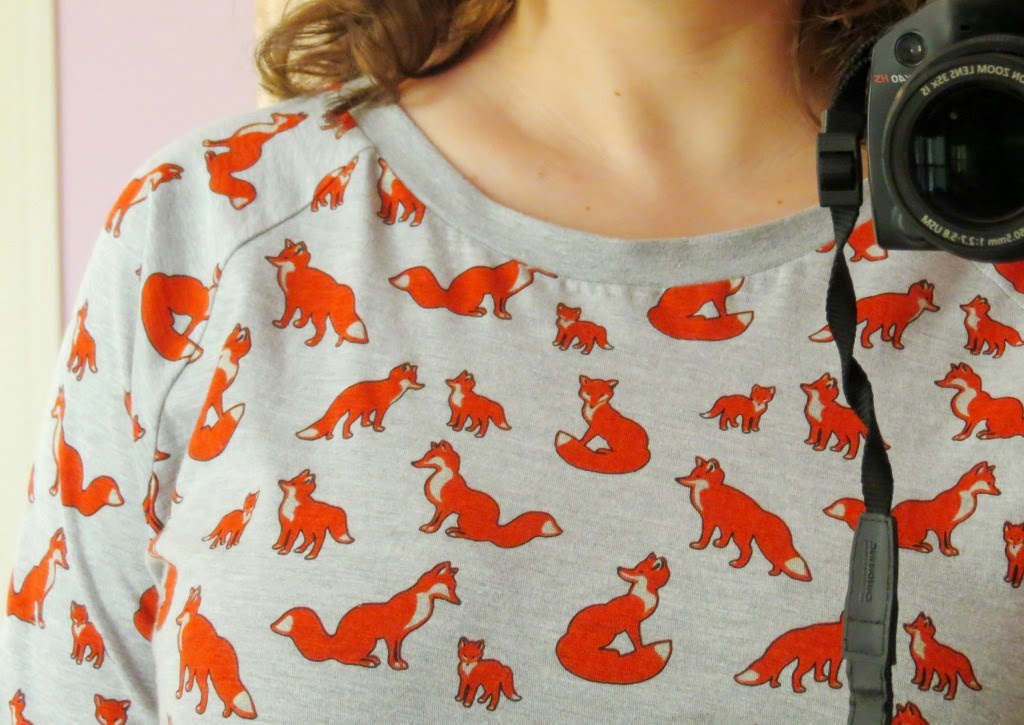 First, I feel that the pattern has a neckline that is too wide for a shirt like this. It just didn't feel right on, if that makes sense. I felt like I was constantly adjusting it, and that it often looked more like a scoop neck. It almost felt like it was hovering over my body instead of laying on it, as I'm pretty sure a t-shirt is supposed to do. Then there's the slight puckering and the fact that the neckline doesn't lay flat as it should. So here's where I'm going to give you my two cents (actually closer to a nickel) on this pattern. I do have some experience sewing clothes, and I know what patterns should look like. From my understanding of pattern grading, you don't make a size (presumably your own) and then simply draw lines all around (say a half inch away, for example) to make the next size up, and then the same for the next size up, and so on and so forth, so what you're left with is a concentric looking pattern. So that was my first clue that this might not end up as peachy as I was hoping, that the grading was just not looking right.

Second, I really get irked when I spend money on a pattern and am told at a certain point to just make it fit, be it clothing or a bag. No, designer, I gave YOU money, YOU make a pattern where things fit. That was how this neckband was. My very first sewing project (and one that I made a bunch of times after that) was a t-shirt, and the neckband was a ring that you sewed to the neckline, matching your notches and so on. It worked perfectly every single time. The new trend in t-shirts seems to be that you stretch your band to fit your neckline (leaving a shoulder unsewn), and then sew that shoulder seam. This leads to a couple things. First--the neckband usually doesn't lay right. The front usually curves more deeply than the back, and so needs more of the fabric, which it doesn't get with this stretch-to-fit method. Second, you don't have nice enclosed seams on the neckband--you have a neckband seam that is part of the shoulder seam and just looks a bit amateurish.

Finally, when I write tutorials I assume that the reader doesn't have much experience so I explain a LOT. I feel a garment pattern should tell you which direction to press your seams (and if they should be open or to one side) so that even a beginner can have a decent looking product. This pattern lacks that. Since I'm a firm believer that a good press is one of the easiest ways to get a professional looking result, this bugs me too (as pressing is not mentioned once). 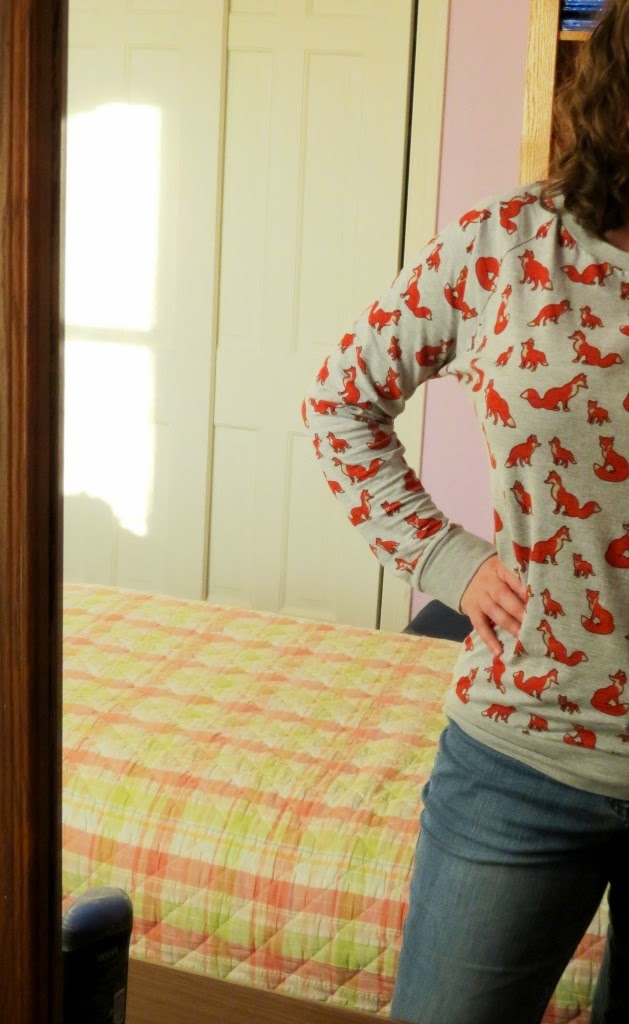 One of a gazillion shots that didn't turn out--the best is the one where you only see the tip of my elbow. I just thought we needed a visual break in the midst of my ranting.

So would I make this pattern again? No. I have a similar raglan pattern that I could modify to get the waistband and armbands (which I do like), but that would fit much better overall and that I'd be happier with. I'm glad that I bought this pattern on a day when they were donating that day's pattern proceeds to a certain charity and that my money didn't go to the designer of a pattern that even I (with my minimal clothing sewing experience, but with a lot of sewing reading under my belt) know is messed up.

My ranting might seem over the top for something trivial, but in a time when buying from indie designers is supposed to be the in thing to do because they're "better" I really get annoyed when one of my 'Big 4' patterns (alleged to be inferior) is the one I prefer for a multitude of reasons. Also, consider the cost of sewing--it's not the cheaper option anymore. People want good results for the precious time and money they're investing.

Phew. I don't like being critical of someone else's work because I know what goes into it, but I have seen a lot of people make this pattern and sing its praises. I suspect it's because they're all more slender than I am and are making a size truer to the baseline pattern that all other sizes stem from (as the designer is a slender gal herself). While I try to be more of a booster, I don't believe in false boosting for the sake of being saccharine and in love with everyone and everything. That helps no one, and doesn't fit my belief that your work should speak for itself and not rely on cheerleaders. My personal feeling is that this pattern did well due to the site being pretty well-known, and not because of the skill of the designer (which, let's face it, clothing pattern design takes a bit of know-how and some quite technical knowledge). I suppose in the interest of full disclosure I should tell you that this is the Lane Raglan from Hey June. I wrestled with sharing that as I didn't want to seem like that person, but I also wanted you to be aware if you had eyes on this pattern.

If you've made this I'd love to hear if you had any issues of any sort with it (not in a gossipy, validate-my-rant sort of way, but so that I don't feel like the only one and therefore possibly crazy).

UPDATED: Apparently I AM the only one. I've been perusing the internets this morning and there's nothing but love, but also a fair bit of this not-right neckline. And each one I see I think "How is that not driving them insane????" So I guess I'm crazy. You were probably already aware.
From the convoluted brain of Bethany at 12:01 AM