So Charity left a comment on my last post that she has seen continuous tape cut with a rotary cutter. I couldn't get my brain around how that would work with the method I tried, so I did some poking around online and found this tutorial by Pat Bravo. Because I can't leave well enough alone I decided to give this method a shot tonight. I had zero familiarity with it and had to follow the instructions as I went instead of just doing it, so that added some time to it. But not much at all. You sew one seam, cut some short lines with scissors and some short lines with a rotary cutter and end up with yards of tape. OK, it's a little more technical than that, but very easy to do. 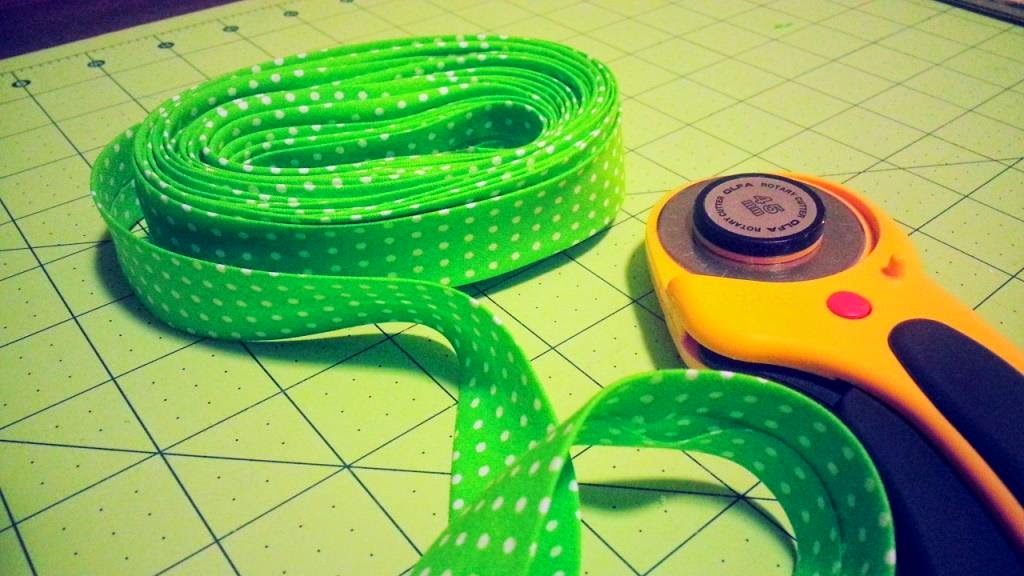 This took me about forty minutes, including the extra time for stopping to read directions, so in the future I'd expect it to be even less. I would have ended up with the pretty much the same amount of tape as the other methods but my rotary cutter slipped and I ended up having to trim enough to short myself a strip. There is one thing I'm not in love with on this--when you do the final scissors cuts you're left with a few quirky looking little angles (not obnoxious...just noticeable in its unfolded state). Since this is cut on the bias and you're folding in the edges when you press the tape anyway this disappears amongst the folds and stretchiness (and will disappear even more when it's actually sewn to something). This bugged me for maybe four seconds, but I quickly and easily ended up with yards and yards of bias tape so I can deal with that.

I now feel that I have exhausted all bias tape making options, so you don't have to read anymore about it either (I heard you all sigh in relief, you know). However, I do love to explore options and try to find the best method for doing something, so I'm pleased to say I've now got two I can fully support (and one I'd like to forget I ever met).

Now I'm off to start a sweater sleeve (I'm finally on the sleeves!) and finish off Project Runway. Later taters!
From the convoluted brain of Bethany at 9:35 PM