A Tale of Two Bias Tapes

Sounds like a fascinating tale, eh? Let's read on and see how it turns out :)

I mentioned at the end of this post  that the folks at Penny Cottons had sent me a couple of things to play around with. The other thing they sent me was a couple of their cigar rolls. A cigar roll is a half yard cut of fabric rolled up to look like...well...a cigar.

I shan't lie. I kept hearing Peter Brady doing Humphrey Bogart saying "Pork chops and apple sauce" when I saw these (because of the cigar?). Anyway, I adore handmade bias tape. When I actually finish a quilt I like adding my own bias tape to it as it can be whatever I want (and it's all cotton like the quilt, whereas the packaged stuff has some polyester to it). And polka dot bias tape? Mmmmmm-hmmmm. Love!

So I was overtaken on an empty Sunday afternoon with the desire (perhaps the need?) to test something pretty nonsensical. There's more than one way to skin a cat (so I've heard, that's not what I was testing) and I wanted to see which way of making bias tape was more efficient. I'll wait for you to put your socks back on because I know I just knocked them off. I had two identical cuts of fabric and I can always use bias tape so I headed to the lab (a.k.a. my dining room) to get started.

I'm not going to write tutorials for these methods because there are tons of them out there, so I'll link you to them in case you'd like to know the methods for yourself. The first thing I did for each cut was to cut one edge off on the bias-- 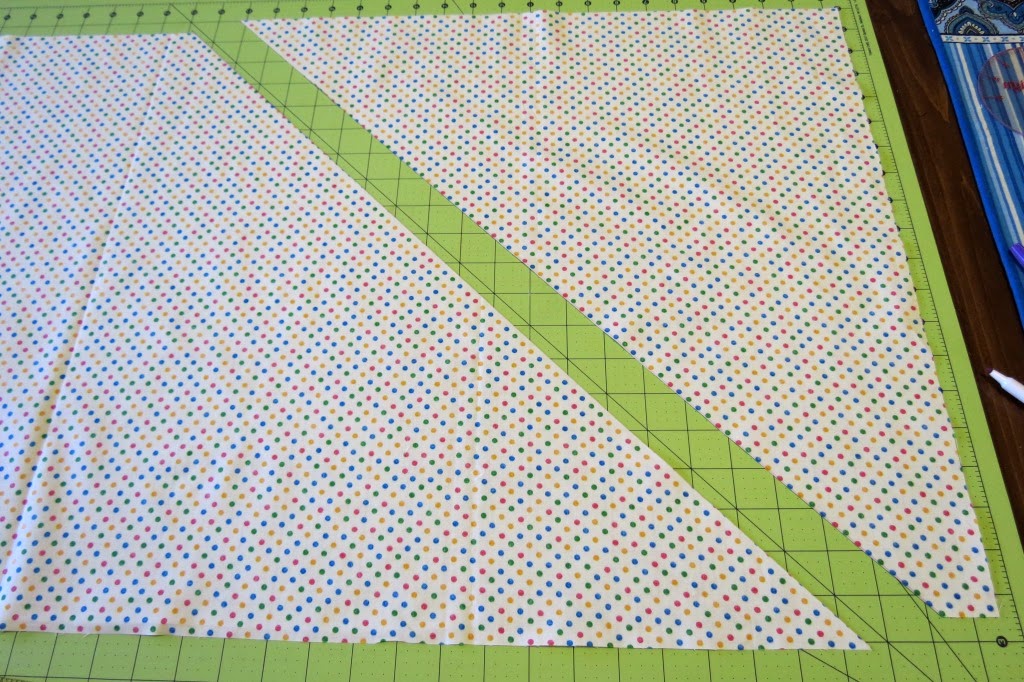 --and then resew it to the other end so I had a big parallelogram. 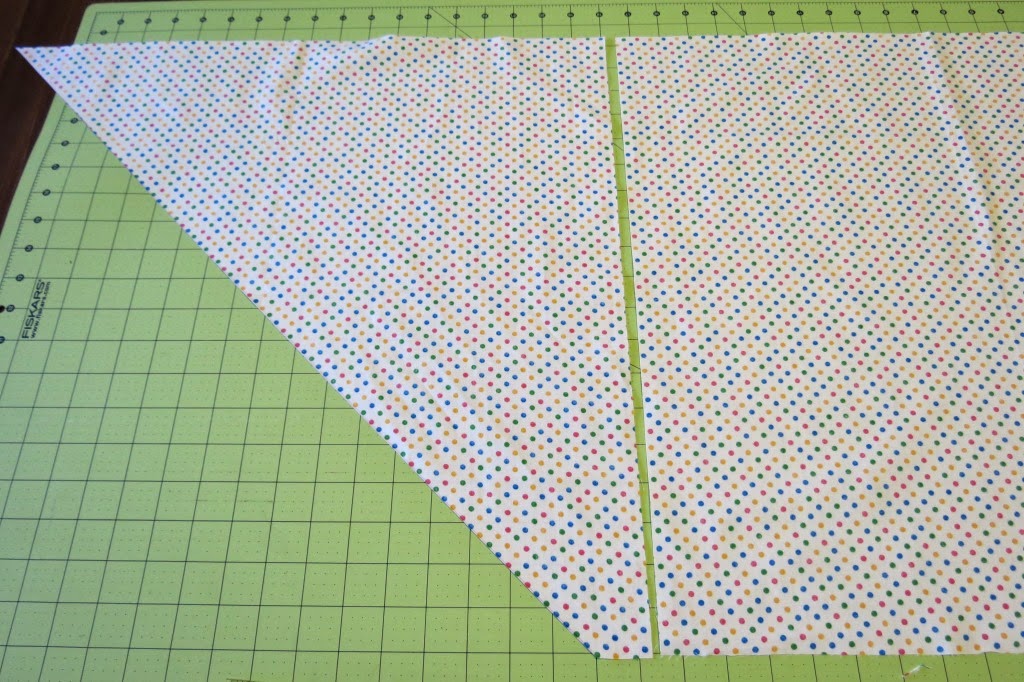 My usual method of making bias tape is rotary cutting a bunch of strips and sewing them together, a la this tutorial. I used to skip the step of cutting the fabric and reassembling it into the above shape, stupidly creating a lot of fabric waste. So now I do it this way, with the only waste being whatever little bit (if any) is left over after cutting my 2-inch strips. OK, so I sewed my shape, cut my strips, and resewed them all together into one long strip. The edges were already slanted, so the sewing went together nice and smooth as all I had to do was line up the ends and sew, offsetting the corners just a tad-- 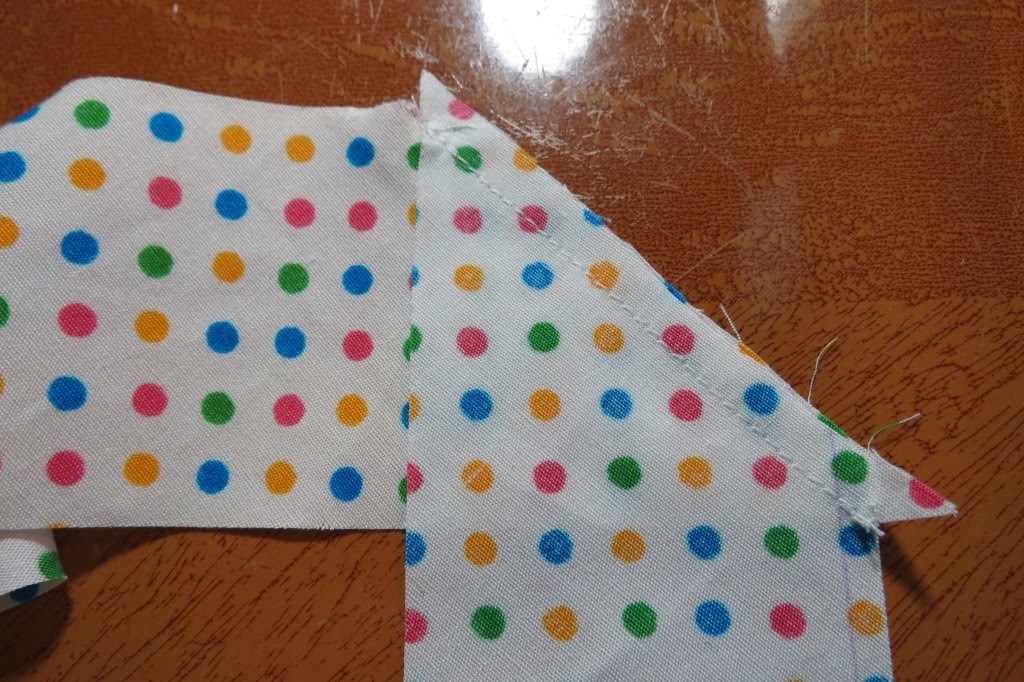 So I sliced, stitched, and pressed the seams open. Then I ran it through my bias tape maker (one of those handy little gadgets I highly recommend as it saves a ton of time and keeps your fingertips from getting burnt off). 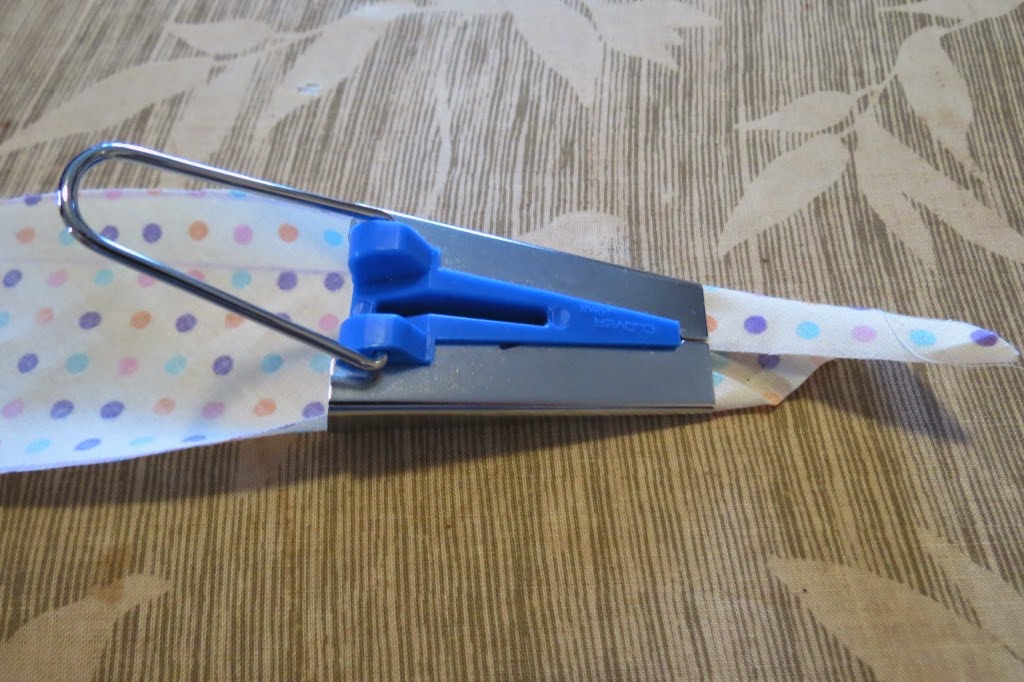 In about a half hour I had yards and yards (just a shade under eleven) of nice, neat bias tape. Good deal.

For a looooong time I have been reading about the virtues of making continuous bias tape. I would read tutorials and think "I just don't see how this is better" but never tried it. So now I have and feel free to judge (along the lines of "If you don't vote you can't complain"). For those of you unfamiliar with the process here is a really good tutorial on how it's done.

Essentially, you mark a bunch of diagonal lines on your fabric. 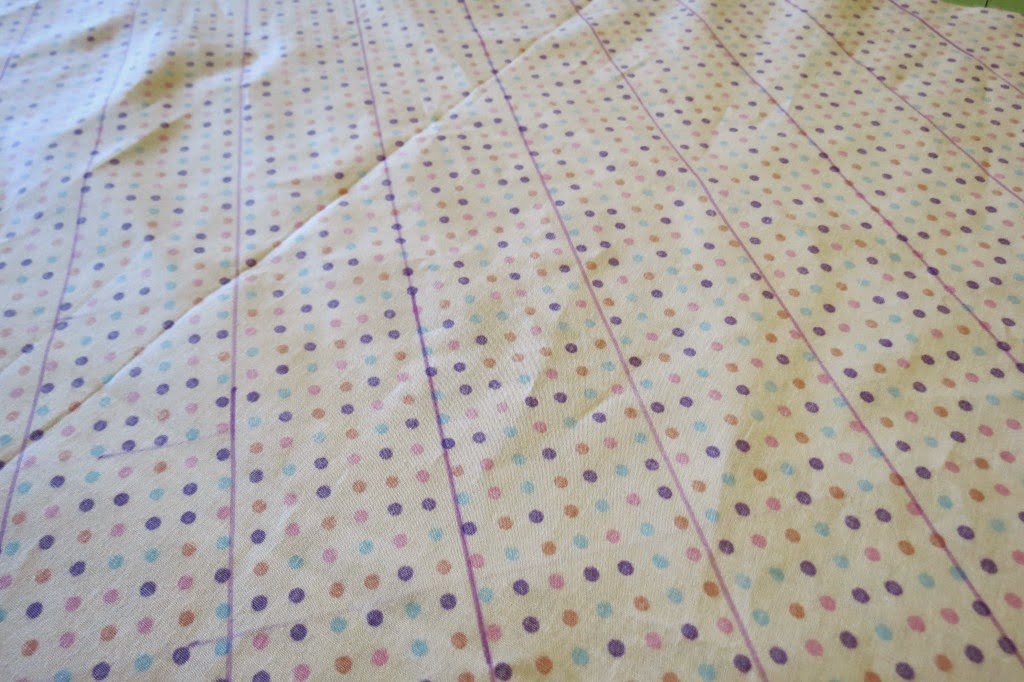 At the top you mark each section with a number from zero to however many strips you have (only the first few are necessary as the rest will fall into place as you go), and along the bottom you number the strips but starting with one. You then fold the fabric up so the right sides are together, matching up the numbered sections (so the zero part will be hanging out by itself for now) and pin. You get a bit of a twisty tube with the sections matched like this-- 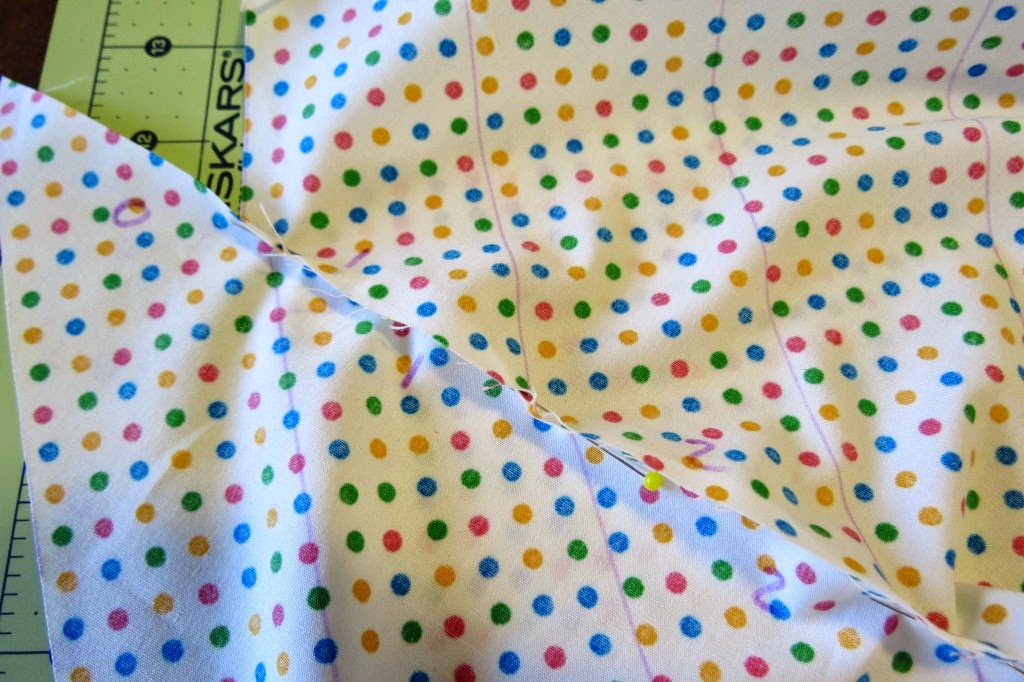 The lines need to be offset a little bit so that you'll essentially be sewing through where they criss-cross, as you're going to sew that seam you pinned. Once you do that, make sure your lines match up nice and neat (I had to redo this part as I didn't offset the sections the first time) and press. 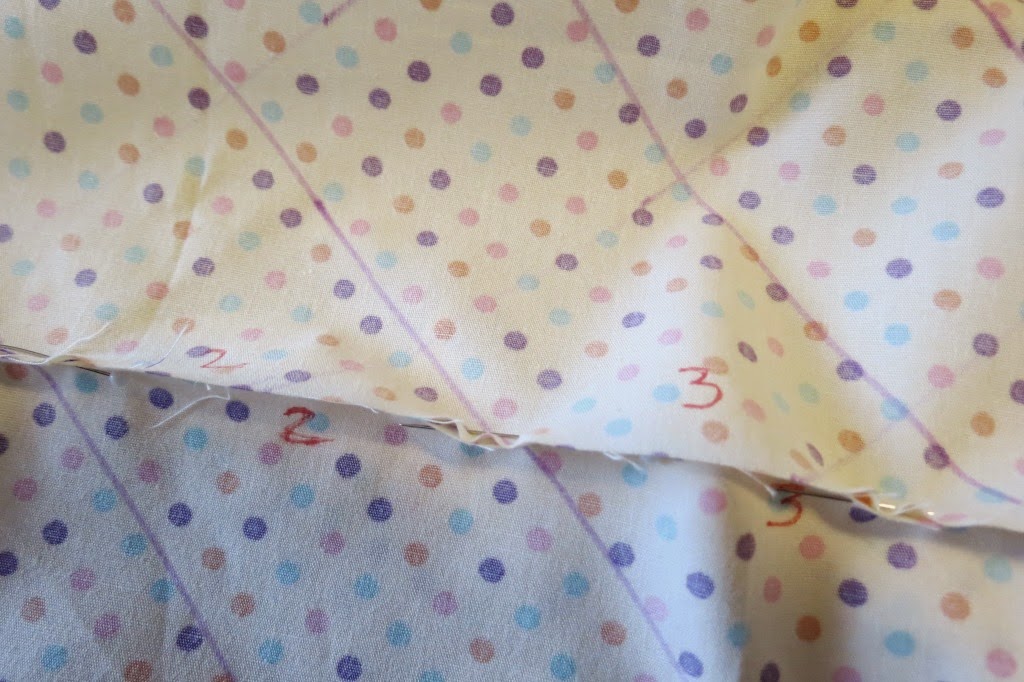 Do you feel like you're reading gibberish? I felt like I was sewing it, and between drawing the lines and then pinning and matching up and sewing and pressing a twisty tube I was already beyond the time it had taken me to complete the bias tape with the other method. OK, so now you have to cut that apart. With scissors. So you start where that strip with the zero is hanging out alone, and just keep cutting along that line. And cutting, and cutting, constantly adjusting the fabric so you can keep cutting and trying not to make messy edges. And then you go run a marathon or read War and Peace or something because that might be quicker. 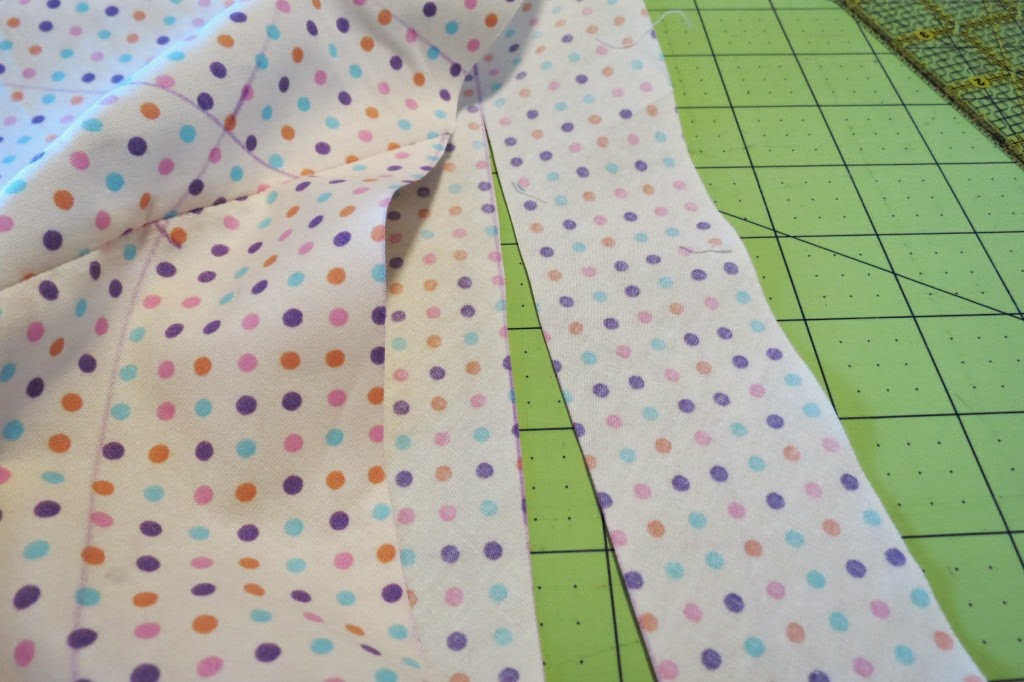 When you've finished cutting, you still get to make it into bias tape. If you haven't got a bias tape maker you might cry at this point because that's going to take a while. But you still end up with some lovely bias tape. 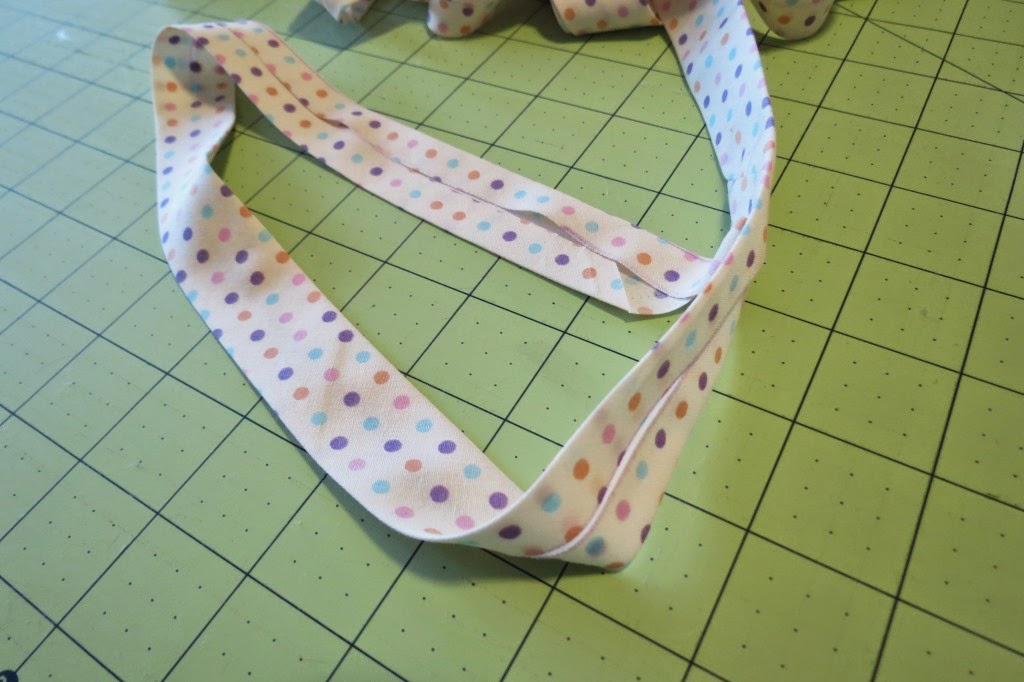 OK, so how did these methods measure up? In case you missed my derisive tone I prefer the stitching strips together method. It's quicker and cleaner to rotary cut and you don't have to worry about any marking residue on your fabric. The strips line up neatly for sewing as that wee off-set is easy to eyeball. And it really works well for matching up stripes nice and neat. The cons? Well, that can be a lot of short seams that you have to press open (and maybe trim the dog ears off of). I included that in my time as you get a rhythm about it it's easy peasy so I don't really see that as a big enough negative.

The CBT method? First you have to draw a bunch of lines (which you'd be cutting if you did it the other way). Then you have to line everything up just so (and I mean just so) or your lines won't match up, and then you sew a pretty twisty seam that you need to stop and adjust a bit as it wants to get in its own way as you sew. Then cutting eleven yards of fabric strips with scissors? Just ugh. Any pros? Well, you only sew two seams. That's nifty, but the other stuff takes up so much time that it removes any benefit of minimal seamage. If you don't have a cutting mat or rotary cutter this would obviously be a better way, but if you need yards and yards of bias tape I'd assume it's for a quilt, and most quilters have those tools.

Both methods are certainly easy enough, and both yielded the exact same amount of tape with minimal waste. The continuous method took about double the time, so it's certainly not a time saver for me. Maybe I'm missing something that someone could clue me in on, but I'll be sticking with old tricks for this one.
From the convoluted brain of Bethany at 11:52 PM