Are you happy? This is the last block post. Next up is the ta-dah, because tonight, after dinner, I attached the binding to my quilt. Tomorrow it gets washed, and that's it. I feel so relieved to have such a big project totally finished. Now I can knit socks (due to self-imposed restrictions I could not start anything new until I had finished the quilt and nearly finished the afghan). It's a special kind of geekery when you get excited about knitting something like socks, but I received this yarn for my birthday and set it out where I could see it for motivation all week. It's delightful.

Anyway, here are the final blocks (there's actually one left but I'm leaving it for the final reveal). 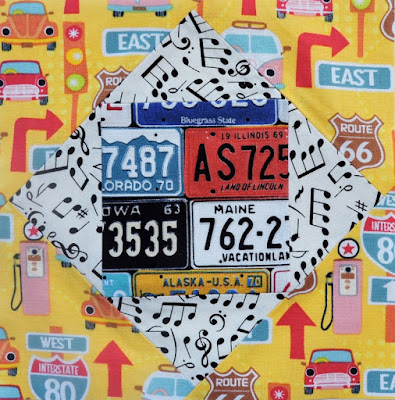 Road trip. Before any of us were old enough to stay home from road trips to Pittsburgh to visit family, we all crammed into the station wagon and ignored each other. That lasted about halfway, and then we realized we had to talk to each other to pass the time. We played the license plate game (in later years Z and I found every state but Hawaii and Alaska) and tried to get people to wave to us (people don't like to do that). But the thing we liked the most, probably because it bugged my dad the most, was singing every television theme song we could think of. When those ran dry, we would sing the commercials for those music collections they used to air on TV. Sometimes there were Christmas carols (at Easter). My mom didn't care because we weren't fighting and punching. 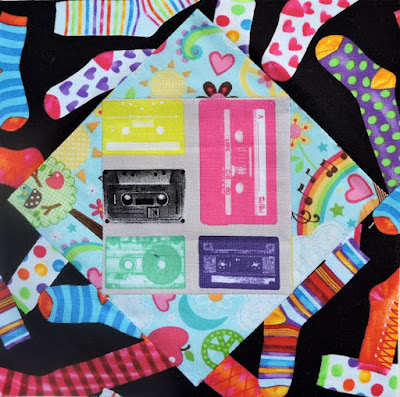 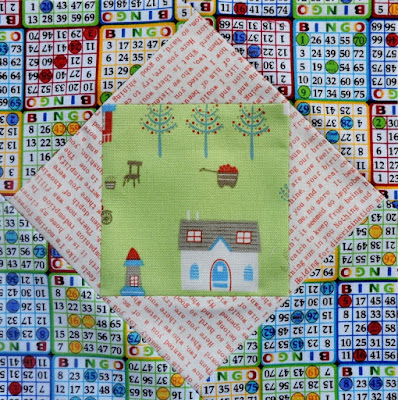 This green print reminds me of my Grandma's house--a big yard, trees, and a washtub of flowers on an old tree stump. We all gather on the porch and talk and talk, every which way we can. And then we head over to the VFD fair and play bingo with dried corn as the markers. One year my sister wanted to drink (which she very rarely does). Her choices of beverage were Iron City Light and Zima. She had too many Zimas and called out a few false bingos. You want to see old ladies get mad jump the gun on yelling bingo. 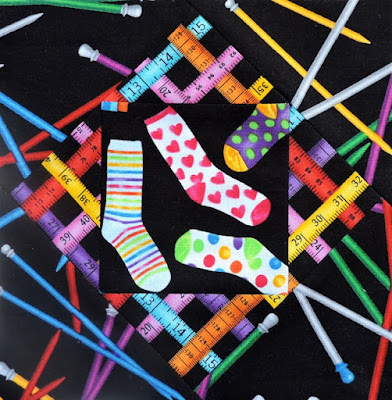 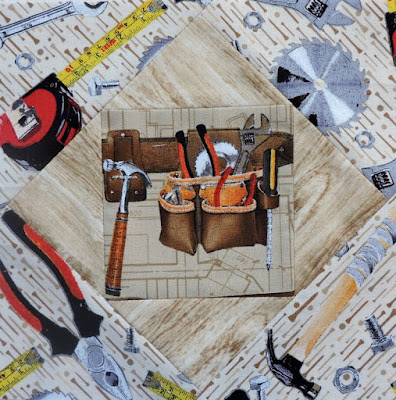 This one is for my woodworking dad. He's been working on a hutch for my mother for a million billion years. He works mostly in spurts. I bet him a few weeks ago that I could finish my quilt and my afghan before he could finish the hutch. Since he's retired he's clearly got a time advantage, but I've got one done already. 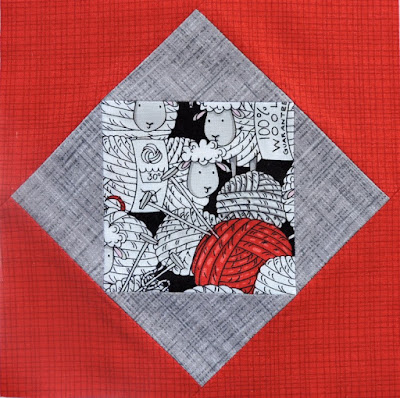 I just really liked that center fabric and not much else matched well, and I couldn't think of a story, so this is pretty much all there is to it. What you see is all there is. 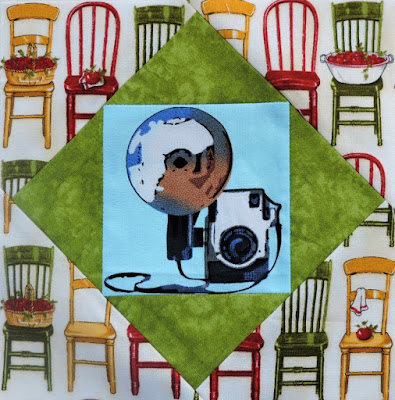 This block makes zero sense to anyone but me. Not long after my parents' moved into their house, my mom's cousin was supposed to get married. For whatever reason they called the wedding off, then decided to get married but would have had to wait a really long time to re-book everything. So they had the wedding at my parents' house in the living room and in the backyard. I remember my brother and I had these old cameras that didn't work anymore and we were walking around pretending to take pictures. Right at the start of the ceremony it started pouring, so everyone ran inside. Coincidentally the living room carpet was the exact shade of green as the photo. As soon as the ceremony was over it stopped. This very same thing happened in her son's wedding this past May. Since his mother passed a few years ago, it was quite eerie, but confirmed her 'presence' to us. Seriously, it was uncanny. Because I was so young, the only other thing I remember is that we had these wooden folding chairs that were rented for the reception. I was a skinny little peanut then, and I remember falling right through the back of the chair. My dad would probably say 'So that explains it!' upon reading this...

Phew. I must say I'm quite glad to be finished with this, so you must all be turning cartwheels to no longer have to read about it. Except for one more. But that's a finish post and those are always more interesting.
From the convoluted brain of Bethany at 9:25 PM