Thusly we shan't speak of this quilt again. Quoth. Nevermore. It has been washed, dried, color-caught, and snapshotted. It smells delicious. It has great crinkle. It is finished.

It's also pretty big (it's a full-sized bed quilt) and pretty busy, but oh-so-scrappy and bright. I laid it out on the grass (the brown grass that is desperately seeking rain) today, a very cloudy overcast day that looks like rain but might just be teasing. 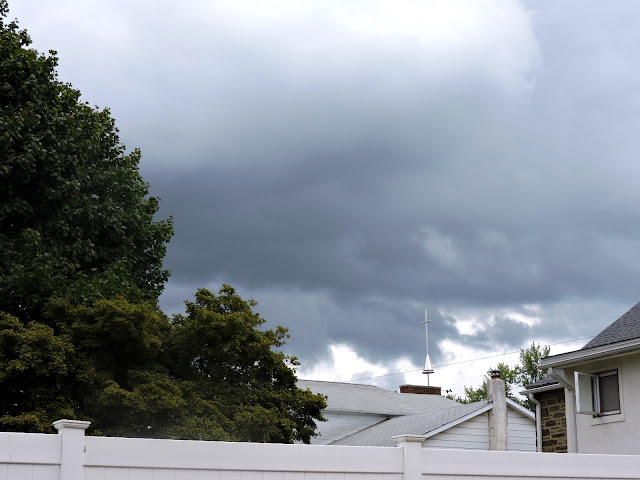 I hurried nonetheless, taking just a few pics since you've already seen so many. It hasn't spit down a drop yet, by the way... 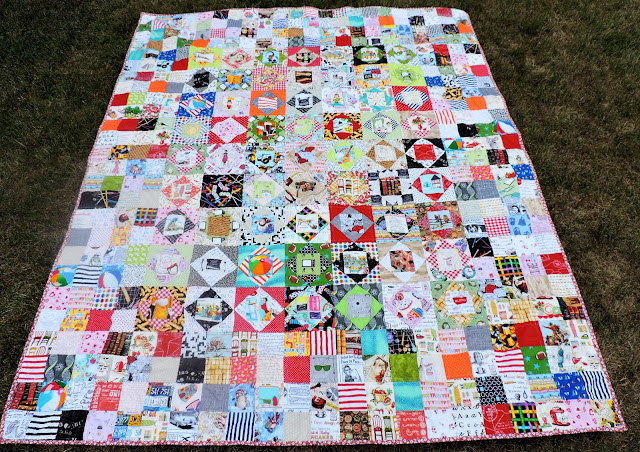 Everything is straight. Probably the straightest quilt I've ever made. I just have a fabulous knack for making straight things look crooked.

There are so many pieces and so many prints that there is nary an ounce of cohesion to this quilt, except in the abstractness of its theme. The center blocks don't stand out amidst the scrappy patchwork border as there is nothing to break them up, but I knew that. I wanted that "look closer" thing to happen. 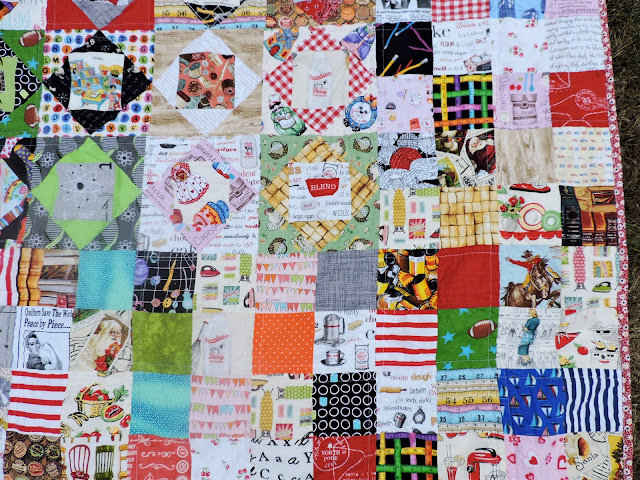 I pieced the first two rounds of the border randomly methodical--I made sure the prints weren't near each other and it worked well. Then I went full on random and a few things ended up near each other that weren't necessarily planned, but I only picked and restitched if the two prints were smack dab abutting each other. 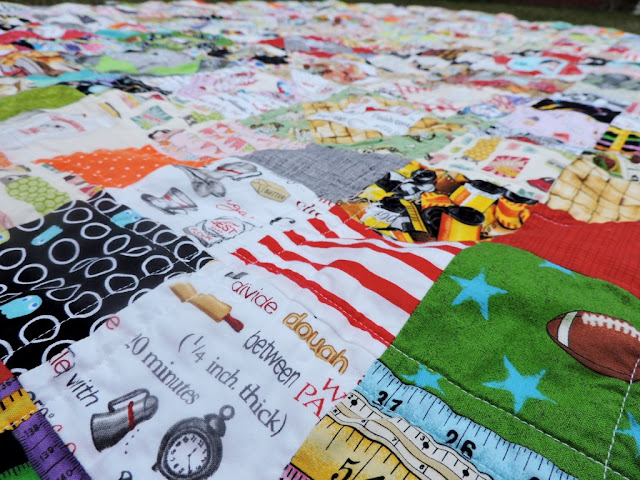 I kept the quilting pretty loose, which is unusual for me. I used the central blocks as the reference and did double-lines straddling the seam. I stuck with that all across the quilt, treating the four-patch blocks the same as the larger story blocks. I pondered for a while adding some extra quilting, but kept what I had. I spent about an hour looking up suggestions for quilting density and different battings and so on, but decided what I had would hold up just fine without extra stitching being too distracting (which now that I'm thinking about it is kind of silly considering the helter skelter of the rest of it). 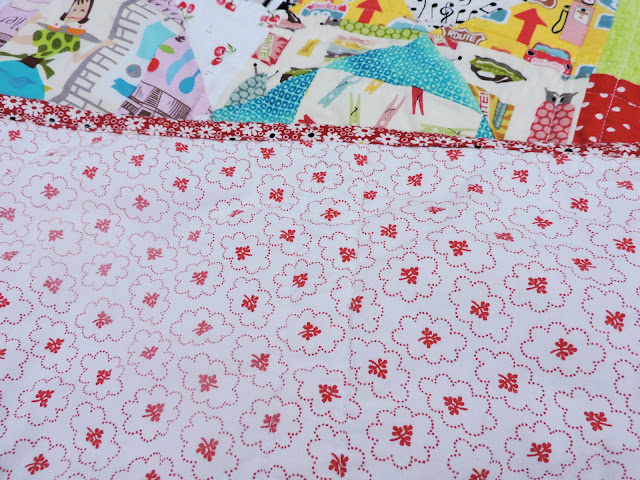 I was looking for a cute backing fabric and found one that I absolutely love and is just as "me" as the rest of the quilt. I don't remember what it's called but it's an extra wide backing fabric. The binding fabric I bought at the most perfect quilt shop I've ever seen out in Lancaster County (aka Amish Country) a few weeks ago on a day trip. Even that is a memory. 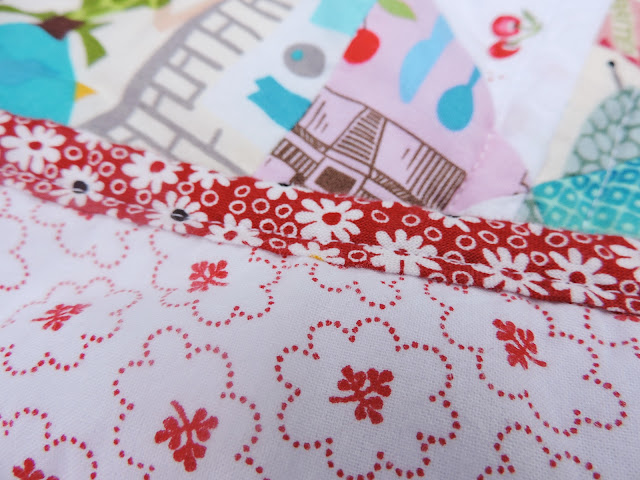 The binding job is not my best, but the bluster of the print conceals anything amiss. For the whole thing I used machine quilting thread and had no issues. I had read an article by an "expert" who said you must-must-must-no-question-about-it use quilting needles to quilt your quilt. I dumbly sat there nodding in agreement like "Yes, that's a great idea" and picked a few up. I'm glad I used a coupon and the loss is post-facto only a few dollars, because they were rot. Skipped stitches, broken thread, feed problems, you name it. I switched to a universal and danced along happily. It took me four nights to quilt and bind this. I'd still be on the first row if I hadn't switched needles. 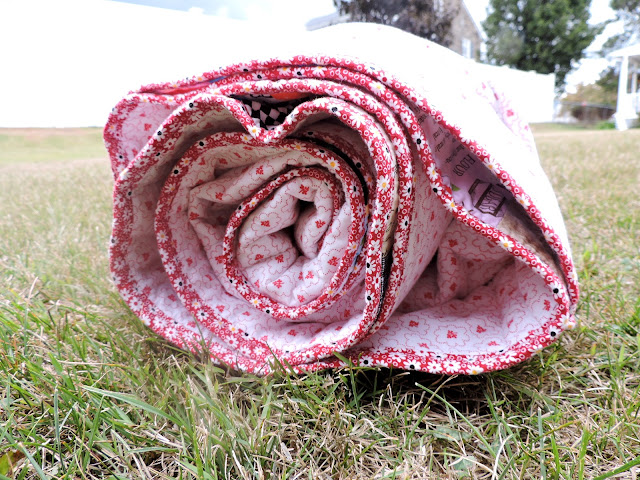 Obligatory rolled up quilt photo that I took hastily because I swear I felt raindrops, but nay.

OK, I do have one block to show you that I didn't share before. It makes no sense on the surface. I showed it to my mother and it drove her crazy that I wouldn't tell her. An idea that seemed grand a few weeks ago now seems kind of silly, but it's the center block of the whole thing and kind of fitting that way. 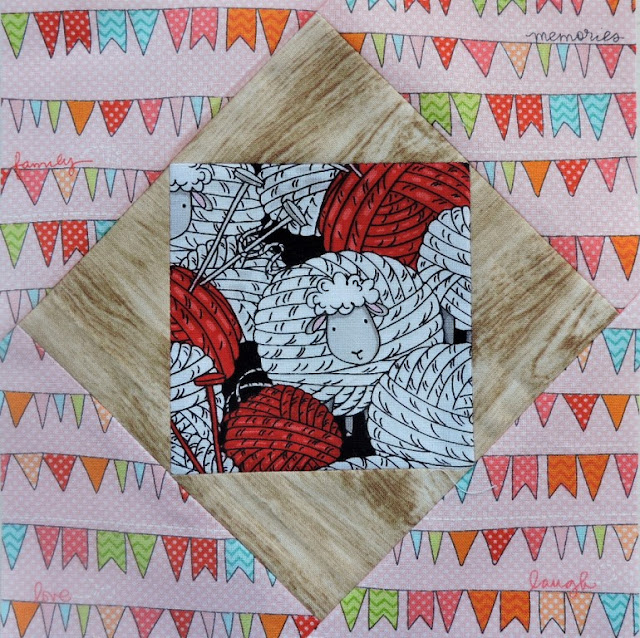 "Huh?" you're asking. The outer pieces (with the words love, laugh, family, and memories) are metaphorically hugging the hard wood and the soft sheep. Because that's life, isn't it? Hard and soft, difficult and easy, unyielding and pliable, all rolled up and wrapped into one, embraced as part of our existence on this rotating marble we live on. We are every age we have ever been, every experience we've ever had (good or bad), and everything we remember. From afar we may look at things and think nothing other than 'hot mess,' but when we look closer we see so much more. We understand. And we see things more perfect than not. I consider myself lucky that I get to lay under such a quilt, literally covered in good memories and happy thoughts, knowing that there are so many more I could have added if the fabric companies would only read my mind. So a hot mess? Yes, and I'll gladly have it called that. Because in my secret heart I know it's perfect.

Here are the links to all the block posts (in case you need help falling asleep).


Linking up here:
The Inspiration Board at Homework
Craftastic Monday at Sew Can Do
Submarine Sunday at the USS Crafty
Your Whims Wednesday at My Girlish Whims
From the convoluted brain of Bethany at 9:00 PM