While it looks like nothing has been going on here in my hive, I assure you I've been busy. Work has been busy, I've been getting in more exercise, I've got a shawl on the sticks, and I've got a sewing project I can share in the near future. I just haven't really finished anything yet, and not too much that's exciting has been going on to share. So here's a ho-hum sort of post just to say hello, how are you? 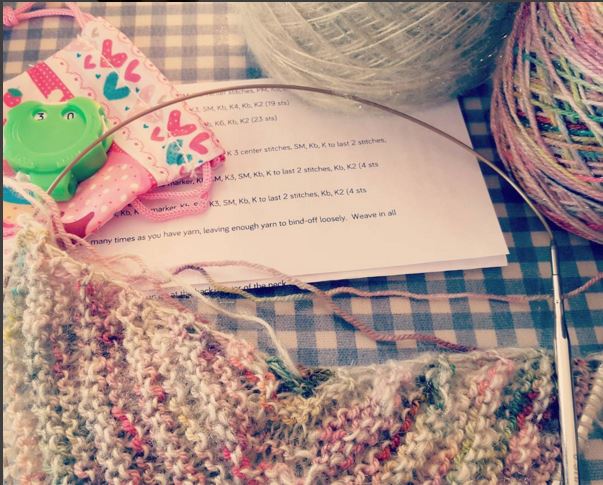 I posted this on Instagram Easter weekend (follow button in the sidebar). It's much bigger now, and is going to be delightful, but it does have that spaghetti effect--the more you knit, the more it seems you have left to knit. I can't wait to show you the yarn in the proper lighting so you can see how it's kind of shimmery and light and airy. 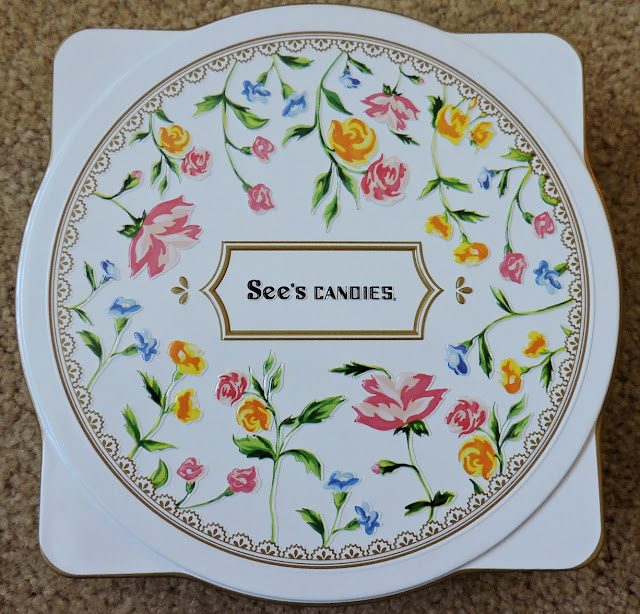 The company I work for makes product packaging (beverage, food, and aerosol cans, as well as closures (like bottle caps and metal lids). One of our facilities even makes fancy tins. On one of his recent journeys my co-worker sent me a picture of this and told me the plant had given him one, and he thought I'd like it--did I want it? Don't have to ask twice! It was filled with chocolate coins, which A and Z have been enjoying. Isn't that pretty? I wish more things came in pretty tins.

And here is my last doodley bit from my sketchbook. I simply drew a bunch of different triangles, and then filled them all in with different designs. It's quite tiring trying to think of different thing to doodle in a tiny space, so there are quite a few repeats, but I tried to space them out. One thing I wish I had done differently--you see the solid black triangles? I wish I had left them white, and filled in the spaces between the triangles, like the grout in a tile. I think it would have popped a lot more, but if I do it now those sections will just look like black voids. Otherwise, I really like how this turned out--it's just so graphic looking. 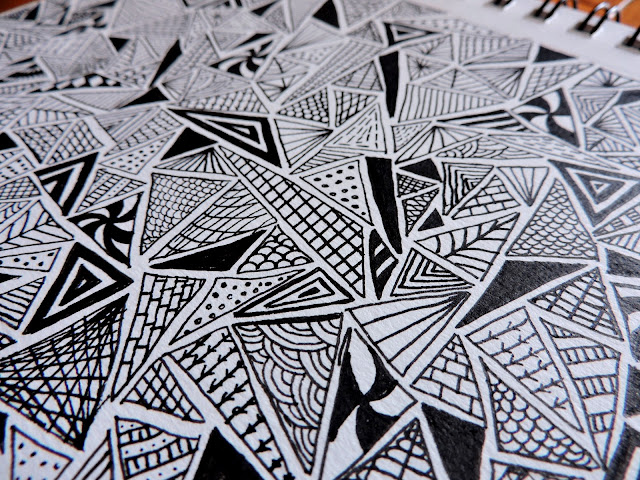 When I look at this I think of A-train. When you're talking shapes with him, he says things in the cutest way (that way where you don't want to correct it because it's so cute and he'll grow up soon enough anyway?). Instead of saying 'triangle' or 'rectangle' he says 'triangle-y' or 'rectangle-y.' It's adorable. He also says 'regular' as 'reguley.' I don't know where he gets it from, as this kid's vocabulary is insanely large, and his pronunciation has always been crazy precise. But I hope it sticks around a little longer. One of my big regrets is teaching Z-man to pronounce his 'Ls' properly. One quick lesson and it stuck, and I never got to hear 'yiddle' or 'yuv' again. Boo.

Sincerely, that's all I've got. I'll try to come up with something more interesting in the future. Swearsies.
From the convoluted brain of Bethany at 10:09 PM