Spring, Socks, Sweaters, and a Show

Well, it's official. It's spring. Allegedly. Today was quite warm, tomorrow will be cold. Then it will get warm again. Then probably cold. I don't see how this is any different from the winter we've had, but I'm eager for flowers so I'll take it (as though I have a choice).

I have one pair of socks that I have yet to show you, so I'll squeeze that in now, because wouldn't it be silly to show you wool socks when it's hot outside? 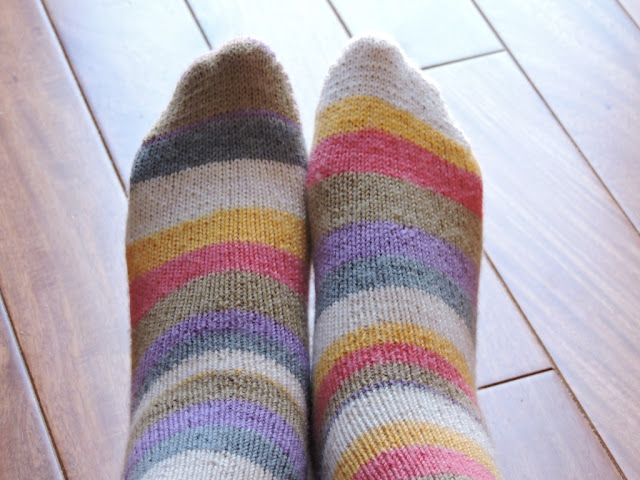 Again, fraternal twinsies because that's how I like them. The same, but different, just like people. This is Knit Picks Felici yarn in the Time Traveler colorway. 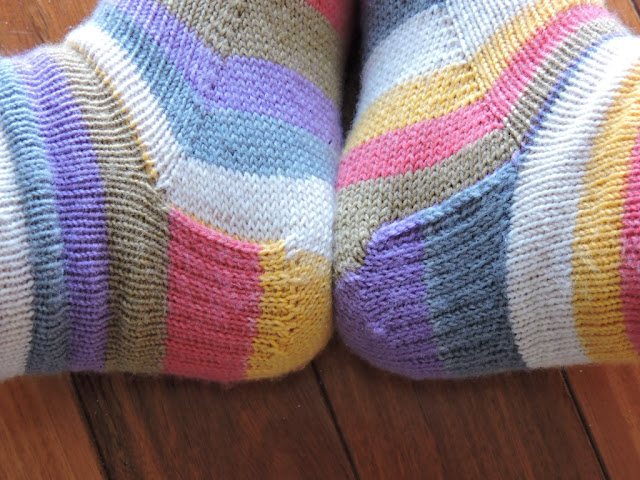 I still haven't ventured away from a very vanilla sock pattern yet--toe up, heel flap and gusset, no special stitches. But that's because I don't want the stitches hidden in the stripes. I still have a few skeins of striped sock yarn to use, but then I think I'll take a plunge on solids (very brave, I know) so that I can try something fancier where the stitches shine and the yarn recedes a little bit. 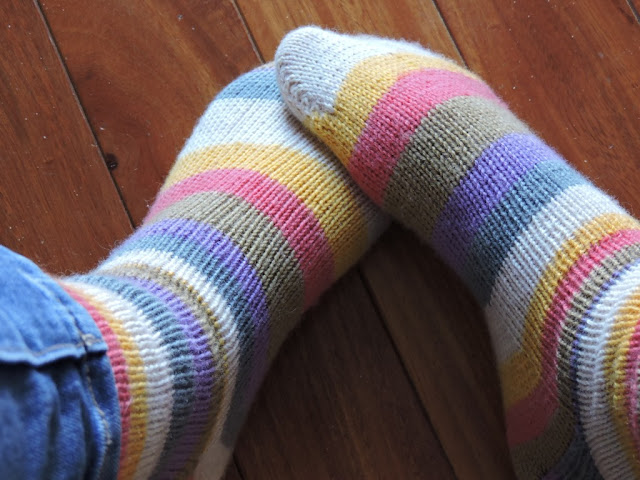 My only concern is that now that I've perfected my needle size/stitch count I'll throw all that research out the window by mixing it up with cables or eyelets and they won't fit.

I took myself off of my yarn-buying ban and bought some yarn for a sweater. I got stuck in a time-suck on Ravelry for reasons I don't remember, but when I emerged I felt a desperate need to make a sweater. I did think it would be coming along more quickly, but really I have one and a half sleeves left and a neckband so I guess it's not too bad. I thought I might not get to wear it until months and months from now, but with the way our weather has been I could be wearing it comfortably in July.

However, this has been a delightful Netflix-bingeing project with it's rows upon rows of stockinette. I've recently started watching Call the Midwife. Have you seen this show? OH! I think it's one of my all-time favorite shows, and I've only watched the first two seasons. In case you haven't heard of it--it's about several young nurse/midwives who live and work with the religious sisters of Nonnatus House in the East End of London in the 1950s. It depicts their day-to-day lives and those of the people in their neighborhood (called Poplar), along with socially and medically relevant (for the era) issues (such as new medical procedures, the post-war baby boom, contraception, and so on). It's all dealt with so tastefully it's almost classic in its scope (which, as an English professor once told me, means "appeals to all people in all times"--which might be spot on since women have been having babies since the beginning of time). There are funny moments, sad ones, and bits that will simply charm you to pieces. I hope whomever coordinated the soundtrack to this show is able to retire comfortably on the bonuses alone. It's served very well to cement in my mind the notion that I was born entirely in the wrong decade.
From the convoluted brain of Bethany at 11:13 PM