Your botany lesson for today....

...is brought to you courtesy of some random woman at the nursery that my mother overheard talking to her granddaughter.

Every year we carefully plan what flowers we are going to plant.  And every year we pick either periwinkle/vinca or marigolds because they've proven themselves to be difficult to kill (we have black thumbs in this house instead of green ones).  I always vote for snapdragons, but we get our act together too late to have much to select from once we get to the nursery.  But this year is different--my parents stopped at the nursery yesterday and had a lot to choose from. So 2010 is the year of the snapdragon.

Here's the fun fact.  My mumsy overheard an older lady saying to her granddaughter "See? This is why they're called snapdragons.  Go ahead--pinch it!"  and her ears instantly perked up.  As she had no clue herself why they were called this she edged closer and snuck a peek at what was being pinched. 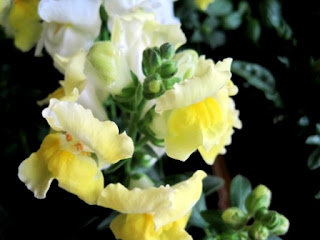 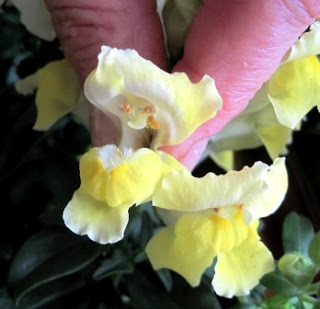 Didja see it?  If you missed it here it is again. 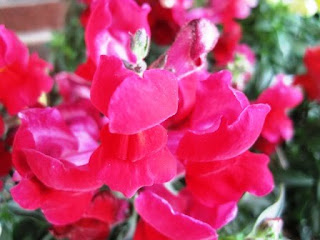 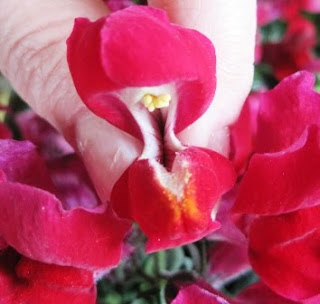 It goes from being a mild, unassuming flower to a dangerous scary predator (hehe).
Wanting to learn more on this flower I looked it up on Wikipedia (which I could have easily done during all my previous wonderings if I wasn't lazy in odd ways).  Most of it was blah-bi-de-blah-blah scientific stuff, but the first sentence stated that it gets its name from the "fancied resemblance to the face of a dragon that opens and closes its mouth when laterally squeezed (thus the 'snap')."  This gave my mother and me a fair bit of amusement, which my father didn't share for some odd reason. Boys are so weird--so unfanciful with nary a touch of whimsy.  I enjoy being a girl :)
From the convoluted brain of Bethany at 4:26 PM