This is what I meant the FIRST time

I made another 'For Pleats Sake' bag this weekend.  I was hoping to make a dent in my stash with it but it really doesn't use much fabric at all.  This one came out the way it was supposed to. I think I'm going to keep this one for myself. 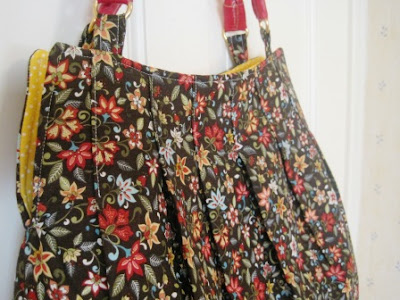 Aren't the colors perfect for autumn?  I found the fabric at Walmart. I don't really like buying fabric at my Walmart (or even going in there--it's oddly seedy for a new store in nice neighborhood) but I just loved the print on this one.

I modified the inside a bit from the original.  First, I didn't do pleats on the lining because I wanted to add pockets--a voluminous pleated inside wasn't going to make that an easy feat.  I did the pleating on the outside and made sure the two pieces were the same size.  Then I laid them down on my lining fabric and arranged them in the size and shape I liked, and then cut it.  I then laid these lining pieces on my fusible fleece and cut.  I inserted the inside zipper pocket (using this tutorial) before I ironed that side to the fleece.  For the inside slip pocket, I fused the lining to the fleece first and then sewed the pocket on to give it a little extra stability.  I then added a magnetic snap as a closure, even though I don't think that part is entirely necessary. 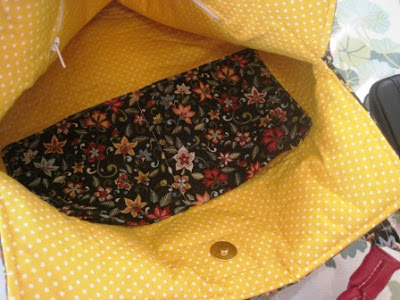 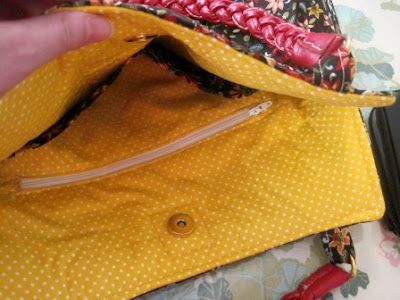 I have a bit of a thing for polka dots...if I could get away with it I would line everything with them.

For the handles I used another pair of faux leather braided handles that I had.  They're not glamorous but they'll do. 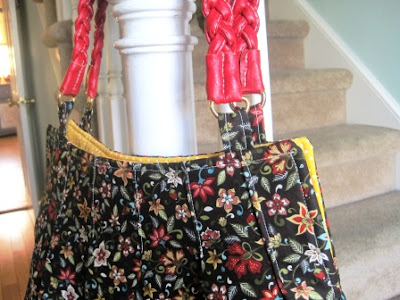 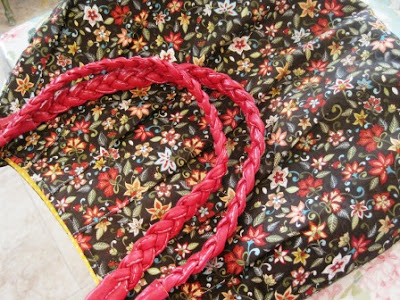 It figures I'd finally make myself a bag, and that it would scream "Autumn!!!!"... just when the weatherman is calling for it to be in the nineties again.

I used something on this bag I have never ever ever used before.  Fusible woven interfacing.  And heavens to mergatroid I am hooked!  I've heard how it's supposed to be stronger and have a nicer drape, but it was always a bit pricey for me, so I went with the basic craft-fuse stuff.  I never had any problems with it, but this is so much nicer for sure.  I found an incredible deal on the stuff, so I stocked up.  Plus it was extra wide, so it should last me for a nice long time.

I have one more bag I have to make for a fundraiser, and then I'm hoping to have some easy crafty things to share, one of them being a quilt block that looks much more difficult than it is.
From the convoluted brain of Bethany at 7:30 PM